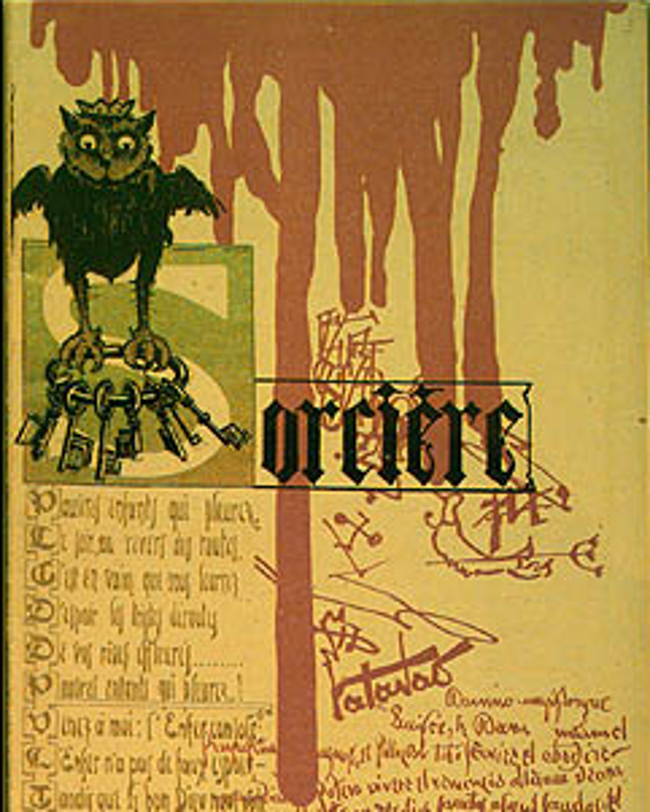 For your browsing pleasure this evening ATS, we have a beautiful Art Nouveau faux witch's almanac from 1896, drawn by Manuel Orazi and penned by Austin De Croze.

It is kept in the Witchcraft collection of manuscripts and books at Cornell University library.

Colored Lithographs by Manuel Orazi. A rare piece of occultist ephemera, printed in an edition of 777 copies (Ed. So few!) to commemorate magic for the coming year of 1896. Each double page spread mimics the Christian calendar in some respect (name days, iconography).

The document is at once a spoof and an attempt to chart the year of magic. Its surviving interest resides in the extravagant and compelling illustrations, especially the full-page right hand plates, by Manuel Orazi.

I don't know about you, but I am a big fan of art from the Art Nouveau period, especially if it has a mythology or occult theme, so I find these lithographs to be especially cool and beautiful.

Since it's witches, let's start with October:

I especially love the verdigris green tint to the month of the year and the mandrake root border at the top of the image above the witch.

This one has the names of Archangels related to the days of the week on the right: 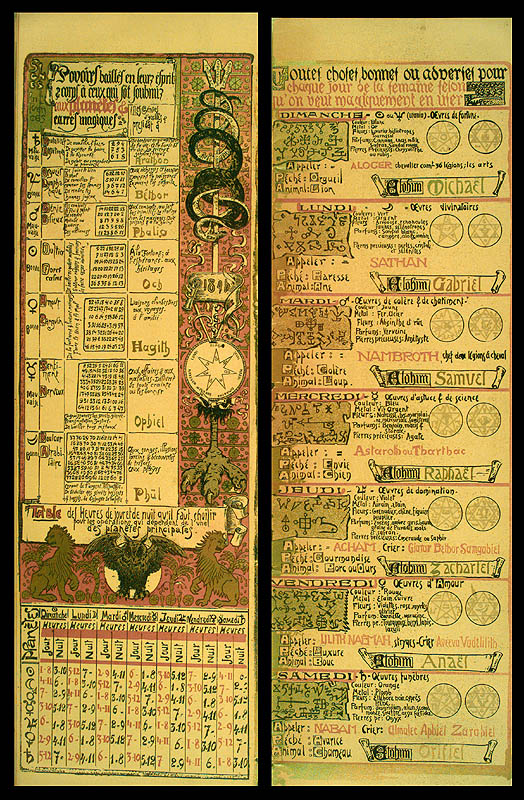 And on the left side it has some other sort of names, also presumably angelic, related to the planets.

The witch-headed Moon in this one is awesome; and so is the mob of what appear to be red-eyed cultists of some sort: 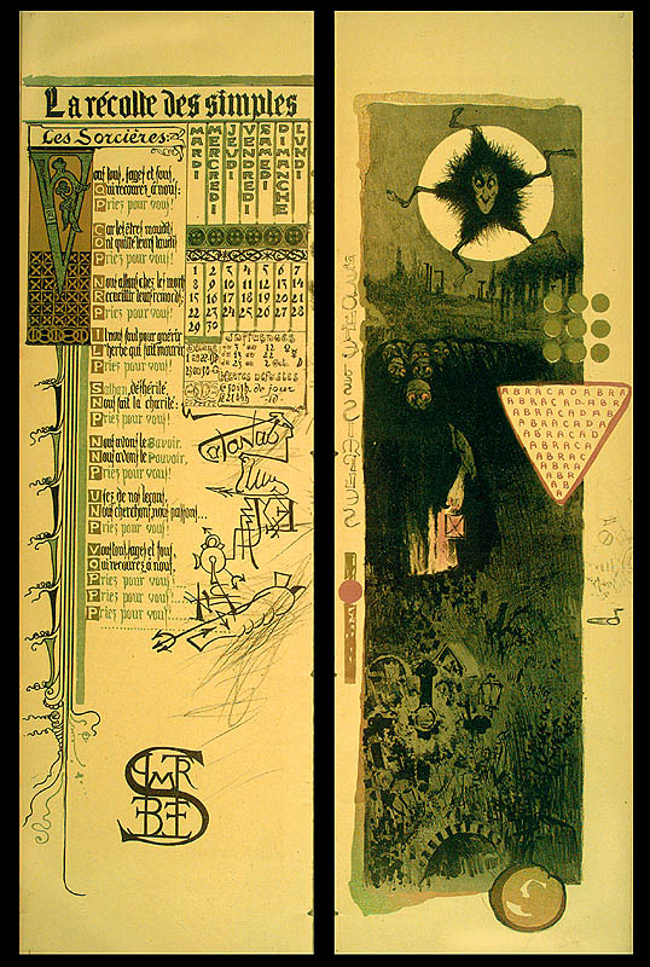 The sigils are starting to get interesting in these, too; remember, this is 1895, decades before, say. Austin Spare, for instance.

Looks like July is a bad month for Alchemistes. 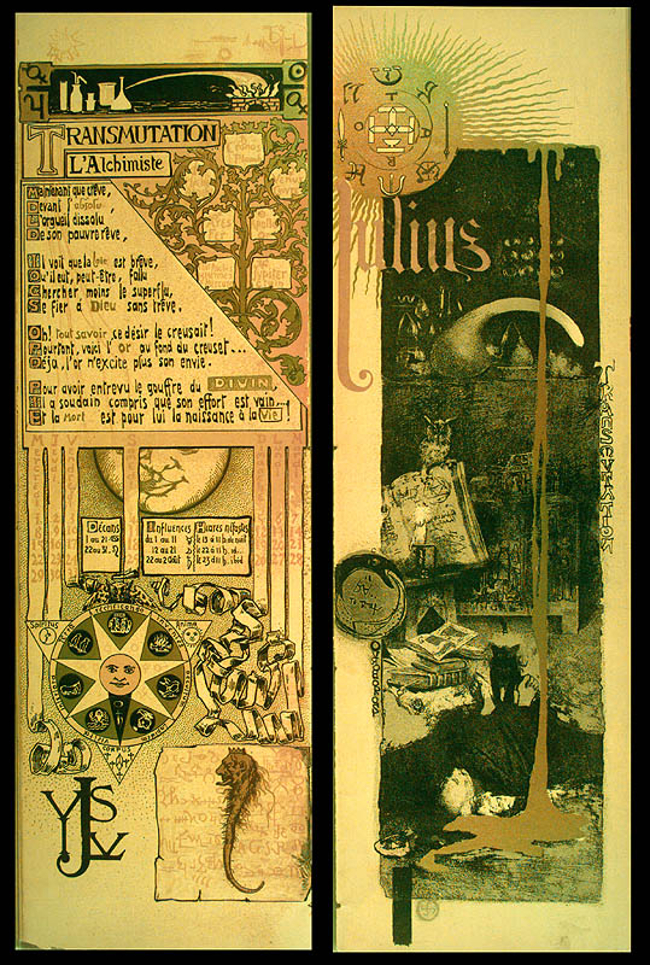 I really dig the bleeding sun with its quasi-occult symbols in the upper part, and the weird little chnuphis in the lower left is rather creepy. There's a lot I like about this one.

Finally this one that I think really places the book in history: 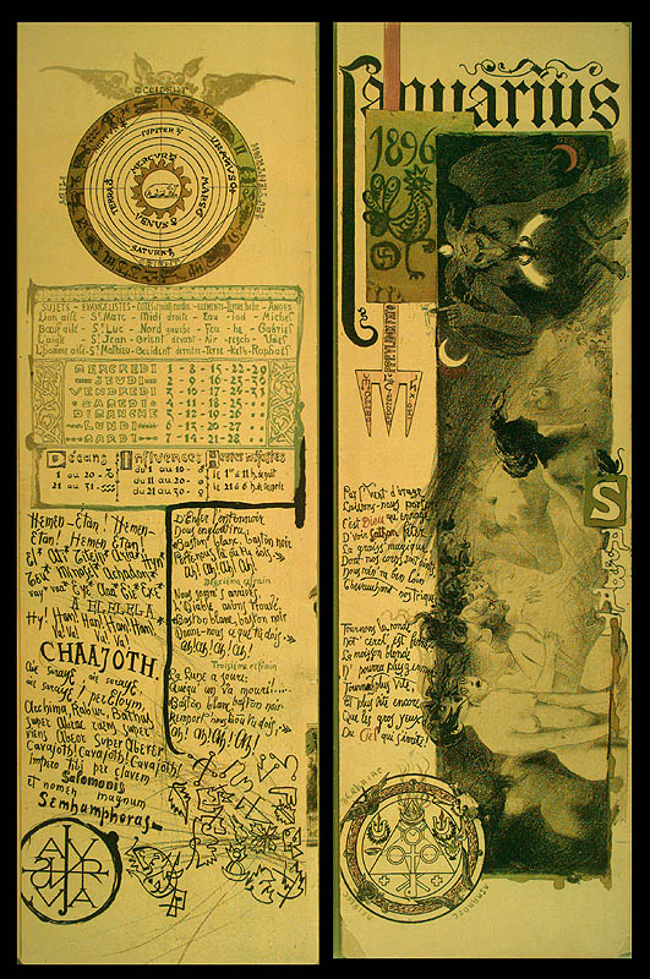 If you look at it sideways you'll see that it portrays a witches sabbat.

Calendrier Magique is an artistic-spoof, as the quote from Cornell above says, but it is a very beautiful spoof directed at a public that was very hungry for that sort of thing; 1895 was also the year of the Taxil hoax.

Anyhow, have fun, ATS. I really think that the images are special, and I have enjoyed picking the animals from the occult managerie and other symbolism out of them.

A fine piece of graphic work, perhaps in some ways the Necronomicon of it's day, i too love Art Nouveau, so much so that i only collect Japanese prints, which were the greater influence on the French print makers.

There was also in Japan obsession with dark tales of murder and superstition and the strangest of myths and legends,which were ever popular themes in the Meiji period, the juxtaposition of text and illustration, people used them as wallpaper, pasting them on the dividing screens between rooms, which is why relatively few survive in Japan.

But Art Nouveau as art to live by was a great movement in it's own right and much more preferable than Modernism, Manuel Orazi a good exponent of the style, perhaps that is what we need today, a new artistic theme...? 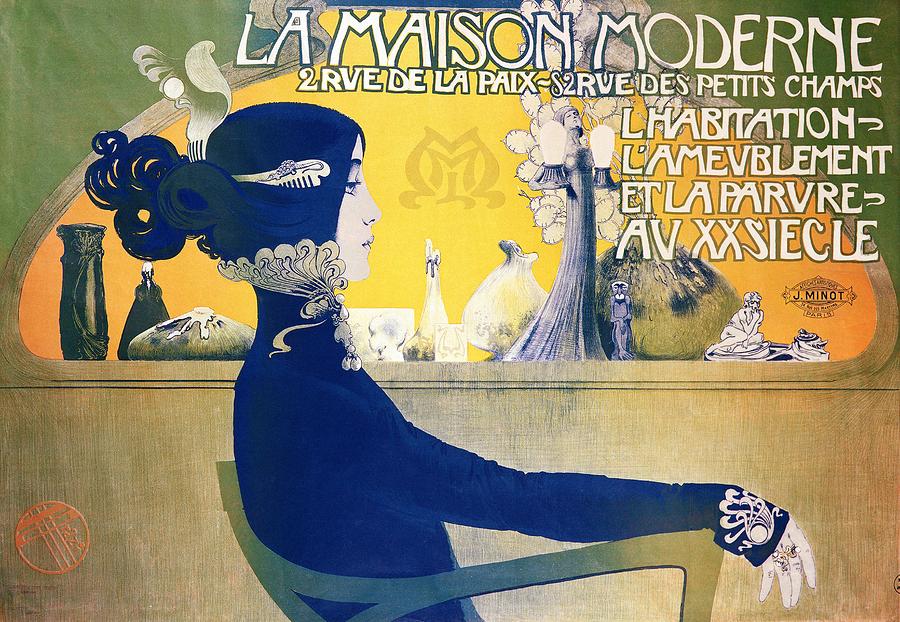 perhaps that is what we need today, a new artistic theme...?

Yeah, I know, that has been on my mind a lot, too: art projects. The folks at FL have been a real inspiration. It would be awesome to have a 'workshop' of artists and writers that publish under a single 'house' name.

I have been really in to fonts and logos as well, trying to build an old-fashioned Unix font server, for instance, becomes really interesting in light of the history of typeface and graphic design.

I really love these because it is such an early glimpse in to this sort of material that is specifically designed to titillate the senses of what must have been a rather sophisticated European reading community during the Gay Nineties.

For instance Manuel Orazi's way of combining "ecclesiastical" looking fonts with "profane" fonts is genius and I am not well versed enough to know if anyone had ever done that before him in this sort of popular graphic design.

Good! I knew these images would find a warm place to roost here at ATS, I'm really glad that you dig them, too.

Yes sort of like raising a standard as rally point, when i studied art the talk of course was always of doing just that but then it came down to no consensus of opinion and it had all been done anyway, at least in terms of arts movements that could have global impact, a limited brand identity style such as at FL is always possible of course but the question is does it have any real significance in and of itself, apart from obsession with the mirrored image.

In terms of the art Noveau prints i tend to admire them, and the Japanese, because they're the opposite of my own artistic inclinations and tendencies, in terms of flat primary colours, clarity of line and subject matter, i am a lot closer to the French symbolists though in terms of style, who would also have been a major influence on the Almanac. 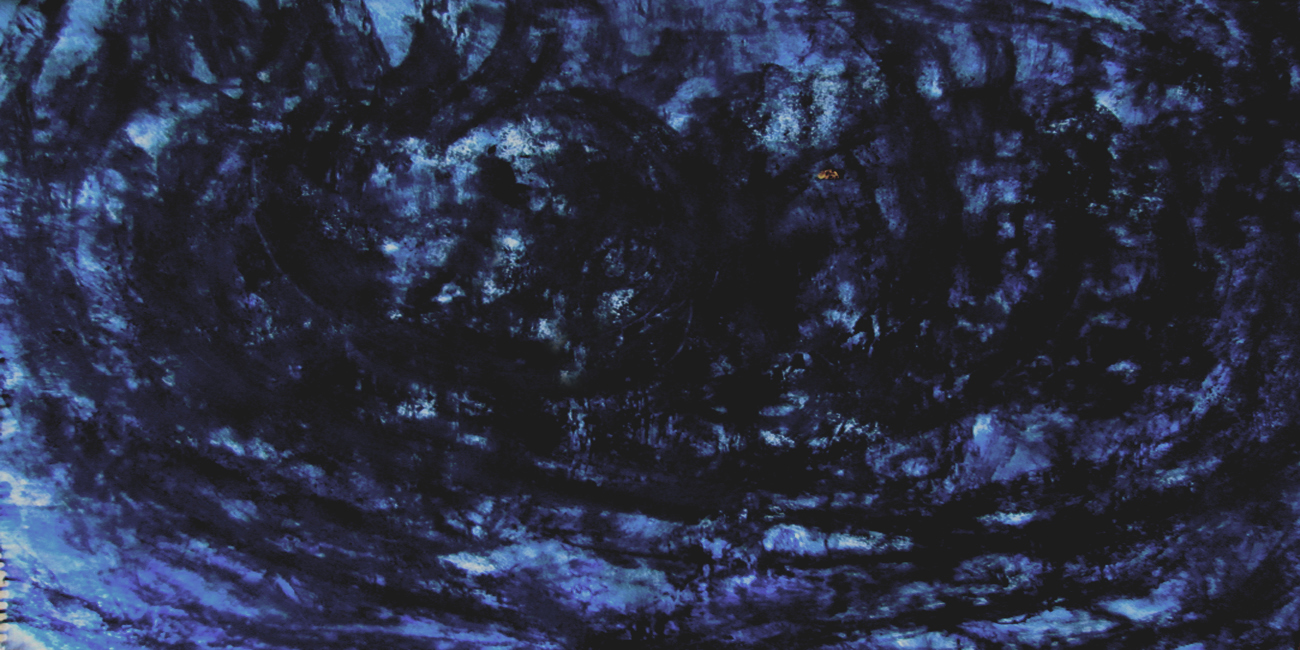 My art tutor said he would generally advise against using black in painting because of it's absolute qualities but in my case he thought it's usage was my best asset, so it's a case of the dark arts after the likes of Odilon Redon, the misty and murky and barely perceived, but as i suggested in the Almanac you see the balance and with the Modern movement it was generally ever onward into the light were everything was glaringly apparent sans mystique.

In a sense then i would look for that balance between the greatest clarity of light and the deepest dark depths of suggestion in any 'look', these days Graphic Artists are terribly'goal orientated and Fine Artists notorious dissolutes, and seem to drift ever further apart, the education system encourages this.

I'll be honest, I'm still trying to understand what is happenning at FL, but the process has been very educational for me and has sincerely shifted my perspective on what I want to do with my professional life, and someday when I can get focused on it, my artistic life. They bring together everything I love: history, language, high-performance-computing, sociology, genetic algorithms and on and on. Their site is one of my favorite things about the internet, and to be honest I kinda hope that they are all employed by Google. I want to believe that Google is that weird and fun. But in the end I just think they are using Google's APIs like everyone else.

That is really neat what you pointed out about the difference between the Art Npouveau stuff and your own artwork. You are a powerful artist, and it's interesting to get a little idea of what informs your work. I think that any series by you concerning western European folklore would be interesting.

with the Modern movement it was generally ever onward into the light were everything was glaringly apparent sans mystique.

Yeah, I see that now too, I know that part of the intention of the Calendrier is to shock, and what you have said makes sense in terms of the way that the shocking stuff has been made so clear. I am especially fond of the font-styles in the images that look like they were written by some very focused and well-informed mad-person.

...the education system encourages this.

I know that I have a lot more studying to do before I see that directly through art, but I have seen it in many other sciences and disciplines, so I imagine it will be found there too. I look at the education I have recieved and compare it to my academic heroes and I'm pretty embarrassed.


I think with FL the question is what motivates those individuals to dedicate themselves to that Project, they do seem to have a great working group but the problem is ever with the agenda behind it and what the dominant influence is, you try to put any sort of working group together were everyone's going to be trying to introduce their own agenda and that's an inbuilt fail before you even begin.

For myself yes perhaps i could illustrate my take on the Nordic Tree of Life and the generation of that Pantheon, rescue the Nordic Gods from the axe wielding Heavy Metal berzerkers, as i'm currently delving around at the bottom of such it would probably also be healthy to work my way back up.

In terms of local folklore all we tend to have is boggarts, which by Roman report were the local Celtic tribe the Setantii anyway, who lurked in bogs and leapt out to murder unfortunate passers by, and black hounds of questionable origin that prey upon the more feeble minded of the country folk. 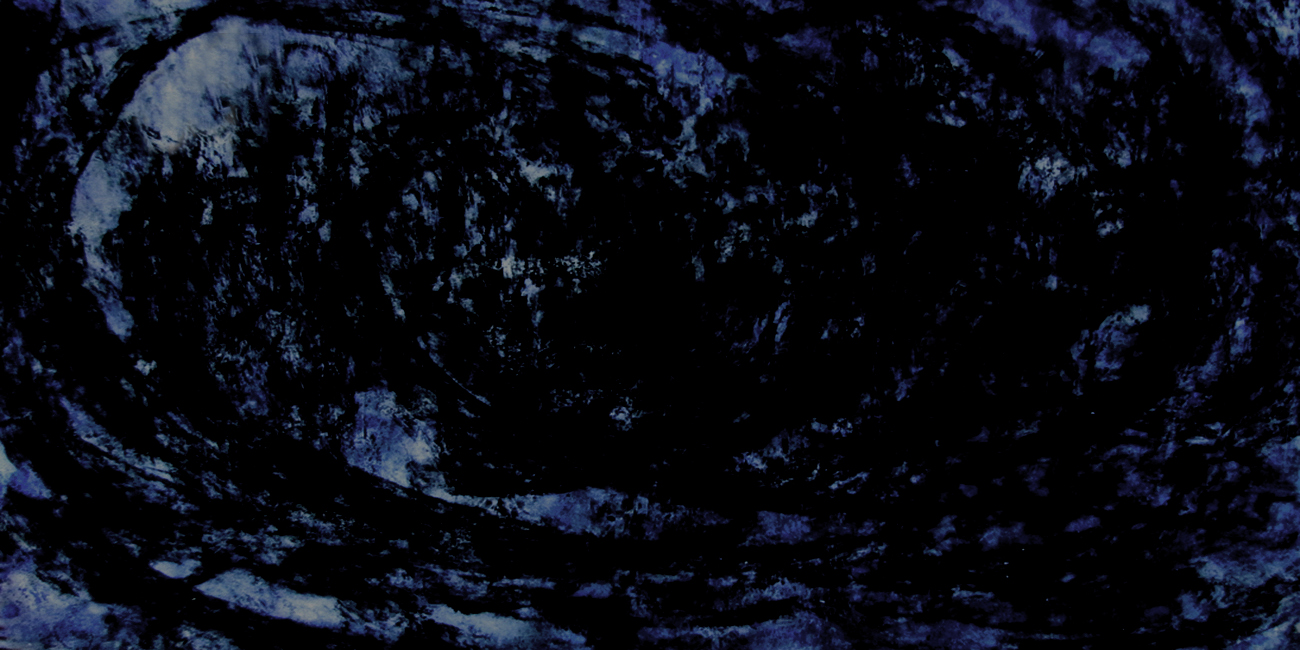 The descent into obfuscation and insanity is an aspect of balance in the almanac which is appropriate, from astronomical facts to astrological interpretation, cosmological triangulations towards signs and sigils, the focal point ever expanding into diffuse ephemera. In most of my threads i try to take ancient history and mythology back to some sort of focal point at the personal risk of becoming a great bore, through clarity and structured reason, so it's something of a relief to go in an entirely opposite direction in terms of personal creativity, and there's also the temptation to do so in terms of written style and content here, cut loose and go wild...but few would get it.

In terms of local folklore all we tend to have is boggarts, which by Roman report were the local Celtic tribe the Setantii anyway

Boggarts are neat, I also really like stories about the pooka and I am especially fascinated by stories about lamia. Have you read any Gene Wolfe? I think that you would like Soldier of the Mist.

A.A. Attanasio also has a really crazy take on the Arthur cycle with his Arthor series, which also has some pretty bitchin' Viking stuff.

I haven't read any no but i'll try to have a read of what you recommend, i probably will be able to relate to someone who goes around believing and experiencing everything...

I am sort of tempted to track down a copy of the Almanac with a view toward purchasing but i should probably just stick to the Japanese, here's one from my collection you'll maybe like, the hero Yoshi-tsune in training with the Tengu were he appears to leap higher than the Moon, by Yoshi-toshi. 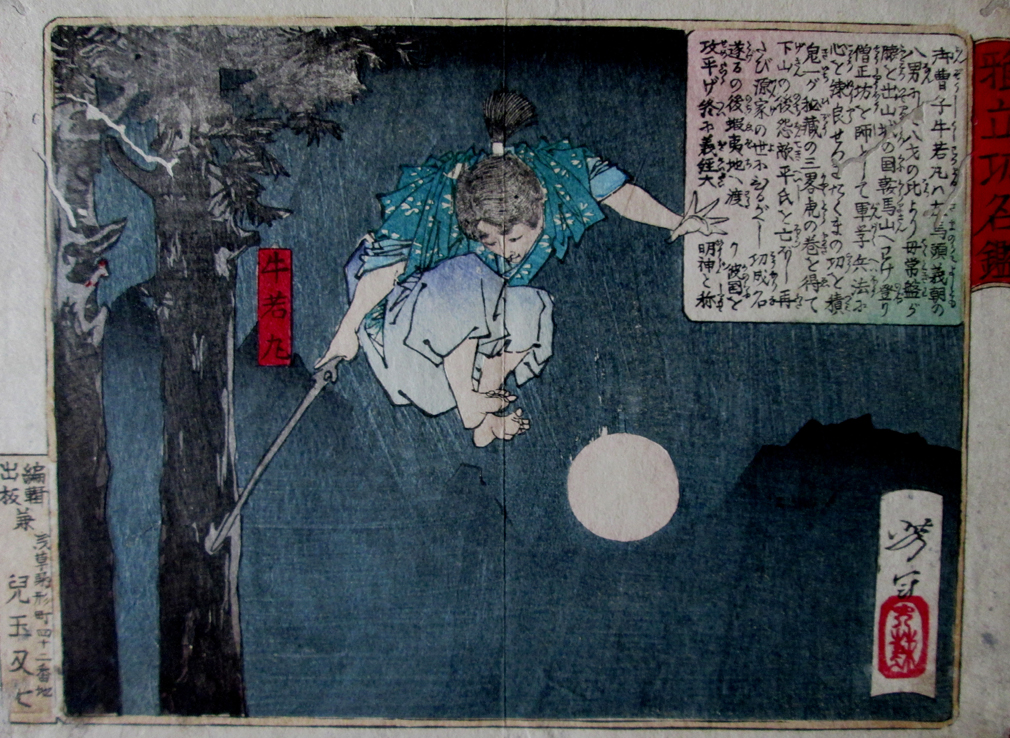 Nah only jesting I love the artwork in it and love the era.

Oh and whoever mentioned Boggarts me Grandad lived in Boggart Hole Clough in Manchester when I was little and scared me silly with tales of the Boggarts taking me away.

I think with FL the question is what motivates those individuals to dedicate themselves to that Project,

"Life Without Books Is Death"