Thank you once again Vice for bringing us some actual journalism and not the crap spewed out by the MSM and even alternative sites simply speculating.

In this video Vice journalist go behind the scenes in the Islamic State shedding light on this seemingly unknown group. Very scary look into the state of the minds of the Middle Eastern muslim extremist.

It seems almost as if they are being welcomed by the middle east. Children pledging their lives for the cause.

Where are the Moderates ?

There are no Moderates.

Nobody would dare stand up to these psychos.
edit on 31-8-2014 by whyamIhere because: Add line

What's even scarier is how young the kids are that they are teaching this ideology too.

This is the same thing as a child raised in Christianity but they are teaching principles of violence as a means to an end.

posted on Aug, 31 2014 @ 02:50 PM
link
Just terrible, these type of people should be fought with fire in my opinion, insanity is infectious in large groups and with the amount of zealotry they have shown it is well deserved. Don't take this the wrong way I am not anti Muslim, I have Muslim friends, but what these people are doing is not right, and people can't just sit back and watch. If this spreads and they get their hands on a larger arsenal that won't be pretty.

This is now a common theme: 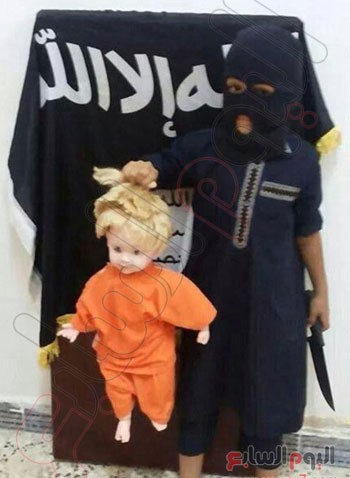 Check out this guy:

Where are the Moderates ?

There are no Moderates.

Nobody would dare stand up to these psychos.

Not even a US president?

It's not insanity, it is a unique form of evil, far more infectious and dangerous than insanity....

But hey, don't mind me, I.could be wrong. Besides, I'm just passing time in Kansas, waiting for a super cell storm to arrive tonight... Sometimes you have to be in the wrong place at the right time.

It was scary to watch the kids spew hatred so adamantly.
edit on 31-8-2014 by Iamthatbish because: (no reason given)

This documentary should be watched by the folk who have made their minds up that IS is akin to a hoax. Those shouting 'false flag' or saying they're puppets of the CIA are too enmeshed in conspiracy thinking to add the dimension of historical thinking. This movement is real and autonomous.

Throughout time, before the CIA, humanity goes through these periodic nightmares. Every century seems to include a time and place where humanity goes insane. Torture, terror and murder run amok through cultures and then resurfaces somewhere else.

The 20th Century had Nazis, Pol Pot, Stalin, Serb-Croat war, Rwanda and the 21st Century is looking like it's on the same path.

What people can do to their neighbours is terrifying and the worst aspect of it all is none of us are immune to it.

I look at the scenes of corpses in the market and the heads on railings and it reminds me of war-time Italy, Poland, France, Germany and Russia. Churches in Rwanda just 20 years ago. There are no high-horses to ride as these events are all in our living memory...

The evil we see isn't Muslim, Christian or national weakness...it's the potential of evil that lives in all cultures and civilisations. That's what scares me the most.

This is the same thing as a child raised in Christianity but they are teaching principles of violence as a means to an end.

Whether you believe in something or nothing is not the point. How you take that philosophy you keep and use it upon the world is the problem. With these people thinking their way they are and doing what they are doing, there is a problem for everyone. They are inviting their own destruction. Perhaps in the end there will be a rebirth of Islam into a kinder, gentler religion whether they bring it about amongst themselves or done by outside forces. It seems inevitable.

It's feels very propagandist. The establishment ceremony seemed like they kept the camera in the right spots to make it seem busier.

For what reason idk.

The only thing I can make out in this fog of insanity is that the face of the Muslim extremist has changed. We were fighting a war against a borderline ghost enemy with very little logistics to track and at any moment most could deny their part. We now have a parade of targets to deal with, that has a logistics train a mile long.

Kinda hard to hide the semi truck load of humvees under grandmas couch you know what I mean.

There's almost certainly gotta be boots on the ground but who's boots will those be? Is there even anyone left that could stand to them? Hired mercs?
edit on 31-8-2014 by mindseye1609 because: (no reason given)

posted on Aug, 31 2014 @ 04:08 PM
link
I can't stop thinking about the stop where the man in the car told the other how his wife should be dressed. I thought the husband in Islam was all that mattered. I was under the impression if the woman got a strict husband she was out of luck.

This shows they are imposing their rules on other peoples wife's. How is that Sharia!?

It is the "potential of evil" that dwells within every soul in this world. You are right, no one is immune.

It isn't just ISIS, this evil is consuming the world, ISIS is just a more obvious part of it.

Our ultimate test is just ahead.... No stopping it now, no way back.