No "loopholes" what-so-ever, would go a long way to satisfying the governments greed for tax monies.

Yes it would, the next step would then be to slash the federal government to a mere fraction of what it is now.

I think you would agree that the federal gov could be downsized significantly?

Imagine how much less it would be if every single member of congress, the president and vice president were not paid the salaries that the do receive.

Think about a time when only one parent had to work, and that one income was enough to pay rent/mortage, buy food, pay utility bills, and still be able to buy things or go places.

Now, it's all anyone can do to make ends meet. Working extra hours (if you're lucky enough to have a job), cutting back on any extra spending, wondering if you're going to get those bills paid or......having to work 4 part time jobs.

In the end, as this tragic story helps show us: it's killing us.

Even the tea party was started by the cause of the greedy Banksters.

They were co-opted by the greedy capitalist like Koch

This will be the Western contribution primarily to the destruction of this world: greed
Belive me this is the truth!

GO READ THE TITLE TO THIS THREAD!

Also: THIS IS THE SOCIAL ISSUES AND CIVIL UNREST FORUM.

Quit badgering beezer for wanting to talk about social issues in a thread that was created for just this purpose please.

I understand why that person's posts aggravate you. Perhaps it would be better if, now that you have expressed your opinion about it, you ignore his posts and continue making your valid points about the situation in which that poor woman found herself.

posted on Aug, 30 2014 @ 12:10 AM
link
The solution is difficult but I would say it is to forget dogma and parties and vote ISSUES of honesty and anti greed policies
Simplicity…honesty

Get rid of the dogmatic ones who spread obsession and “faith” in clueless dogmas that shuns reason and moderation and breeds eternal conflict.

Of course it may be too late….the ship may be sinking

So my motto is
Save yourself

I bid you all a good night
think on it...

The world produces enough food to feed 10billion people a year apparently. I wonder how much of this food is wasted though.

Not just the government however.

Think about big business. Walmart is a perfect example of how in many ways, they've caused manufacture jobs to be moved over seas, jobs lost, and good bye to so many smaller businesses.

Anyone remember this video? I think it sums it up pretty good, even though it's humor:


Some of the comments from some of the article linked above

The other nearby small towns fare no better with our age group, some are pure horror stories. The generations before and after us didn't have it this bad.. Even the old timers who have memories of the great depression looks at everybody in my age group with sadness and a bit of fear..

Three of my childhood pals committed suicide in the last year.
8 of my old classmates from our small town school system (24 for the whole class) have been maimed and disabled in these damned wars.
3 have died in these wars.
1 work related death, 2 of cancer, 1 of heart attack.
Many of us have been or are currently in prison.
Only 4 of us live a "normal respectable life".
Of those 4 only 2 can be considered financially secure.
I'm the only one who accepts that it is about to get MUCH worse. 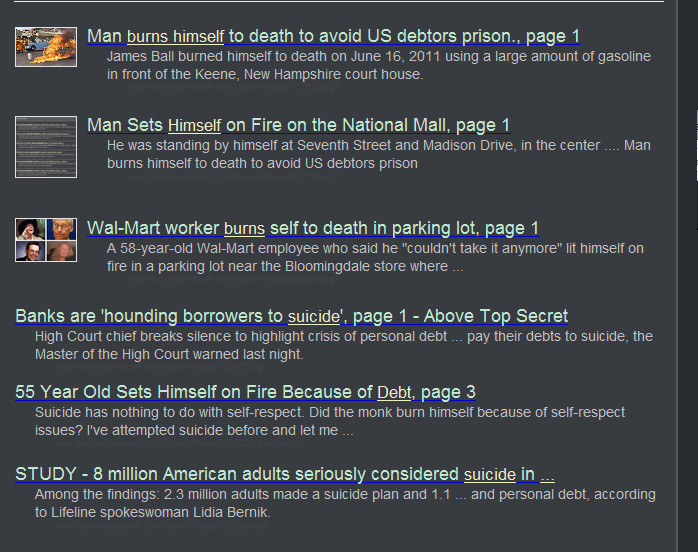 
We ... didn't just get hosed,
we got set on fire
and then had the flames put out with an icepick..

Please keep your tempers in check and posts on topic.

I honestly don't even know why I bothered to reply to you.
Stay stuck, have fun.

I honestly don't even know why I bothered to reply to you.
Stay stuck, have fun.


Why do you have an issue with government having less and the people having more?

Look, people having an extra $15 on their bi-weekly paycheques is not going to magically become enough to take care of their rent, groceries, utilities, et al.

If you are stuggling with a job(s) that doesn't pay enough to live on, an extra $30 a month ain't gonna cut it either. Nor is that extra $30/month going to pay for an education to better yourself either. Nor are they going to be able to "set it aside" as a retirement savings plan.

... So back to the food stamps they go to continue trying to make ends meet.


Your solution is not going to fix the death spiral the country is in.

No living wage jobs available, no repair to the economy... because everybody is standing in line waiting for their foodstamps right after they deposit their paycheques from Dunkin Donuts.

But you will not ever see it that way. You will not see that as more good jobs disappear the more middle class workers become your Dunkin Doughnuts workers. And these corporations have the profits to pay better without raising prices, they just fking won't because they are utter slime.

Defense of such sociopathy, disgusts me.

THAT'S the point I was trying t make in my original post!!!!

The International Corporations are all-powerful.

How can you stop them?

What would it take?

Give me a break!

Who makes the laws?

WHO MAKES THE LAWS?

originally posted by: beezzer
Why do you have an issue with government having less and the people having more?

I'll step up to this one:

Because if anything the majority of this thread has taught me is that the "People" who seek to overthrow the Government would just continue the trend of sociopathic behavior along the same lines as the very system they condemn....except in their version of the New Order, they would be in charge so everything will be to their personal advantage.

Face it, even if by some chance "the People" overthrew TPTB what on Earth makes you think they'd be any more compassionate and caring to those in need and those lower on the scale than themselves?

Please...I see it every day - thousands of people tooling around in their new cars on their way home from jobs they're lucky enough to have avoiding eye contact and ignoring the poor SOB on the side of the road who is just asking for a little spare change for a sandwich, a little reassurance of humanity perhaps. Why? Because he's "taking advantage of my hard earned dollar. Bum needs to get a job." and other such rubbish.

Yeah, these people are so overworked and blindsided to the rat race that they've tuned out and reduced anyone not in their demographic to a non-human status. Classy. Real classy. Classic "class warfare" if you catch my drift.

I have never seen or met anyone who advocates an overthrow who has anything to offer that would care for people who didn't fit into their personal ideals of human productivity and behaviors.

In survival of the fittest the brutes will just leave the weak, infirm, undesirable and elderly to suffer and die because they couldn't pull their own weight....because all praise the glorious and almighty dollar.

Every one is just mimicking the current political process but somehow it's more meaningful because it's Average Joe.

Unfortunately, as well meaning as Average Joe may be, he fails to see the inherent hypocrisy in his own words and actions.
edit on 8/30/14 by GENERAL EYES because: formatting

posted on Aug, 30 2014 @ 12:52 AM
link
I'm about to get my third job. Everyone only gives part time so I need two to make forty hrs a week and one more to get 15 more hours to try to save up to get a car and way way later, insurance for emergency hospital visits etc. life isn't easy.


And these corporations have the profits to pay better without raising prices, they just fking won't because they are utter slime.

I'm not so sure I agree with that statement.

With less of a profit margin to work with, any hiccup can put a company into the black overnight. Have that happen to a large percentage of service industry businesses (which is a guarantee because hiccups happen each and every day when operating a business), and you've now got yourselves a whole new pile of problems.

ie: Suddenly you've got Dunkin Donuts shutting down all over the place.

Now you've got a lack of service industry jobs available to the masses.


The dollar amounts that a company profits at the end of the day is completely moot. It's the profit margins that determine whether or not a company can keep operating.

You may see a 50 billion dollar profit with Dunkin Donuts, but if they spent 49.5 billion to make that 50 billion....

I'm sure you can see what I'm getting at.

Apparently many are choosing these types of jobs as a career choice.

Are they? A lot of jobs went with the recession and the jobs that so called replaced them now are the low wage jobs that have no benefits and are generally part time. If she was having to work that many jobs, I'm willing to bet she didn't even have time to go to job interviews to get a better one. In this economy god help you if your employer finds out you are looking for a new job and you don't get it.

I know I had a great job when this all started,then I ended up with the only job I could find that only paid half of what I had made. Guess what? I took it to keep from starving to death. I hated that job the whole time I worked it. They treated people like crap there and did whatever they wanted to people and if you didn't like it,tough. The managers all went home and had a life,but the workers missed almost all the holidays and had no time for they're families,yet the place touted itself as being family friendly. Yeah right. People complained that they missed being able to go to church even.


THAT'S the point I was trying t make in my original post!!!!

But my point to your point is that giving people back their $15 per paycheque (dropping social security deductions) is not going to aid them in making ends meet, nor are they going to be able to take that money and sock it away for their future retirement. They're going to use it to buy milk and bread because they're still working at a job that doesn't pay a living wage.

AND they're still going to need those damn food stamps to top up with.

It's not a solution.


The only good that would come out of it is that you'd be robbing the government of their cashcow.... But guess what's going to happen when the government no longer has that extra cashcow "revenue" to dip into (to the tune of billions per year) ?


.... you've now just created an even bigger problem, my friend.