A man who had an ISIS flag waving from his vehicle is facing several charges after he threatened police with a bomb Wednesday morning when he was pulled over on the Southwest Side.

Emad Karakrah, 49, was charged with felony counts of disorderly conduct and aggravated fleeing; and a misdemeanor count of driving on a never-issued license, according to Chicago police. He was also issued three traffic citations.

Someone called police after seeing a “suspicious person” driving a silver Pontiac southbound in the 7700 block of South Kedzie at 9:18 a.m. with an ISIS flag waving out the window, according to a police report.

Officers attempted to pull over the vehicle, but the driver took off, according to the report. The officers called for assitance, and another officer pulled the vehicle over after it went through several red lights. 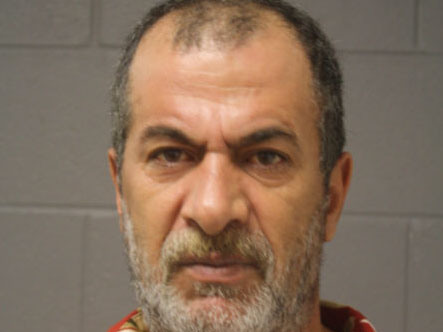 I'm afraid this will be our new "NORM". It reminds me of the Columbine incident and people thought, well that was a one time deal, but it was actually a blueprint to many more to come. I've said this before. I blame the USA for this. The U.S. plays both sides of these conflicts. The CIA is their tool and they leave no evidence behind. Do you think our intelligence was so ignorant that they would fail to see what would happen when supporting moderate rebels in Syria? If so, we need to fire everyone because the people of the U.S. were screaming NO and didn't want to take a chance of supporting Syrian rebels. Do you think that it is because the U.S. is SO concerned? No, it's all about money and resources. The U.S. government couldn't possibly care less about Syrian rebels and their fight for freedom.

originally posted by: RyanDaniel
The U.S. government couldn't possibly care less about Syrian rebels and their fight for freedom.

Or the american people and their fight for the rights they just lost a while ago.

You see it in big business all the time.
The biggest companies in the world are also the biggest "nations".
Across borders.

I haven't seen anyone sporting the ISIS Flag.

Besides, our Government is looking for ISIL.

Our first strategy should be to get the name right.

We can't be that clever and that dumb all at the same time.

But, you got your daily dump on America...Feel better ?

Actually their name is as we speak, IS.

Hope you feel better though,.

Actually their name is as we speak, IS.

Hope you feel better though,.


I would feel better if we all used the same name.

And thanks for asking.

I do feel much better now.

I was referencing "NORM" in futuristic terms, not present.

I was referencing "NORM" in futuristic terms, not present.

So it's a prediction ?

I doubt it...But, you might be correct. We don't know the future.

Not to make light of this, because I am not. This guy most likely is an idiot! On the other hand, considering what just happened with raising the threat level in the UK and an election coming up in the States, I would just like to share this video of how politics may also be at play here!

Most have forgotten this, but I haven't because Tom Ridge used to be our governor in PA. Not saying this is a play to ramp up the fear factor, but it could be........

*One of the very times I'd find Police brutality acceptable.


We can't be that clever and that dumb all at the same time.

That is an understatement, lol

posted on Aug, 29 2014 @ 12:52 PM
link
really Op?....your blaming the US for this?...I'm getting tired of every bad thing that happens in this world being blamed on the US....there are millions of murderous scumbags out there that don't have anything to do with the US. even stupid people can figure that out.

I read it as he was blaming the US for the formation of ISIS, ISIL, IS or what ever name they go by.
Which I wouldn't doubt the us did have their hands in.

Your new avatar had a nip slip, very Janet Jackson-esque
Too bad that terrorist didn't slip and accidentally impale himself on that flagpole eh?

If you waive the flag of a terror State, is that not being a terrorist?

Outstanding, Bumped, and I'm going to have to look up
"Aggravated Fleeing" In the Illinois Vehicle Code. That would
give me some mental picture of proximate and significant property
damage from pure internal combustion screamage... maybe 9 or 10
grand from outa Chuck's massaged Super Duty... if I was the masseur.

Additionally, this guy might not bear any resemblance to a terminal
Midwest gear head deserving of the felony charge. Silver Pontiac:
check. Kowalski THIS. Sorry about the picture window Sergeant...

He doesn't look anywhere near PO'd enough to destroy evil
with a much nastier evil. Get the methanol and benzene flask.
I also seriously doubt the fear factor in Water Tower Place reached
15% plus or minus 2 1/2% of error, Lieutenant. Let's try again.

Chicago cops put muscle cars in the compacter and pistol whip
people that embarrass them: he looks too good for prime time.
In fact I've seen more menacing looks in Wrigleyville after a fan
walks out from the Cards winning in two or three extra innings.

I love defiance, especially if it's competent. However this smells
too much like a stale felafel than a real bust. Wooo scary mug shot
though.

(Waiting almost forever for break to be given) -- timeout error.

originally posted by: TinfoilTP
a reply to: SLAYER69

Your new avatar had a nip slip, very Janet Jackson-esque
Too bad that terrorist didn't slip and accidentally impale himself on that flagpole eh?

If you waive the flag of a terror State, is that not being a terrorist?


Well with the current way we use the word I wouldn't doubt it.
But imo not in slightest way does waving a flag equate to a terrorist act which is what one would need to commit to be a terrorist.

Someone called police after seeing a “suspicious person” driving a silver Pontiac southbound in the 7700 block of South Kedzie at 9:18 a.m. with an ISIS flag waving out the window, according to a police report.

I just want to say 77th Kedzie is right around the Nabisco Factory. That area is highly controversial area considering Mexicans have been moving closer and closer and recreating the border of black neighborhoods out that way with the help of city administration. The Mexicans are also pushing into the suburb right over there across the tracks of 87th Pulaski, which is running the whites out from there, and Oak Lawn to the south.

This dude looks to be either. If he was truly spouting ISIS and threatening Bomb attacks, anybody from Chicago will tell you that between the Latin Kings and the Vice Lords, dude would have become a vapor! That car DEFINITELY would have wound up in a chop shop over in Marquette Park by now.

Entire thing looks suspicious and looks as if they are planning a false flag event with another bad actor to blame it on someone else.

originally posted by: jimmyx
really Op?....your blaming the US for this?...I'm getting tired of every bad thing that happens in this world being blamed on the US....there are millions of murderous scumbags out there that don't have anything to do with the US. even stupid people can figure that out.

You BET I AM! ISIS is made up of thousands of Europeans. 400+ British militants/terrorist, whatever you want to call them along with Syrian Freedom Fighters that the U.S. supported.

The leaders of ISIS were all captured and tortured by the Americans years ago, then released and the first thing they do is form ISIS? Then hand the USA an excuse to go back into IRAQ and seize resources China controls? Too convenient.

The CIA goes into these countries and finds a small group of people who dislike their country's regime. Libya for instance, they found a small group and started the "Arab Uprising" then more and more joined in on the rebellion. We supplied aid and weapons to help them defeat Qaddafi's military. Among these rebels were known Al Qaeda affiliates. Guys like Saddam and Qaddafi were the ones keeping Al Qaeda from gaining a lot of power in the region. So now after destabilizing all of these countries, groups like Al Qaeda and ISIS are rampant. It was all part of the agenda to destabilize these countries. Cheney laid it out and called it the "New World Order". A destabilized country is easier to control and we along with the Saudis want control over all of the natural resources in the Middle East. The Middle East will NEVER be a stable region again.