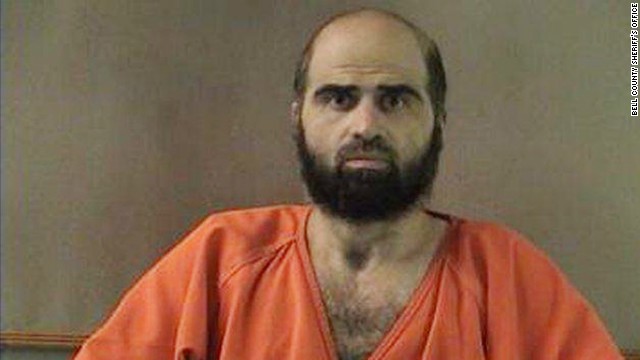 CNN) -- The Army psychiatrist who killed 13 people at Fort Hood has written a letter to the leader of ISIS, asking to become a citizen of the Islamic State's caliphate, his attorney said Thursday.

"The letter states that Nadal Hasan wants to become a citizen of the Islamic State caliphate," attorney John Galligan said. "He wrote it in the last few weeks."

Details of the letter were first reported by Fox News on Thursday.

Described as a two page letter, it was addressed to Abu Bakr al-Baghdadi, the notorious leader of ISIS who declared himself the caliph -- the religious ruler -- over what he calls the Islamic State that he says stretches from western Syria to eastern Iraq.

I'm just perplexed how a American can fall for this kind of ideology/zealotry. Is he delusional? ego driven? Does he want credit within the Islamic world for killing infidels? Maybe he just wants more attention for himself or his cause?
edit on 28-8-2014 by LDragonFire because: (no reason given)

posted on Aug, 28 2014 @ 10:32 PM
link
Good. Buy him a ticket and send his murdering arse on over there. ASAP. It'll certainly be cheaper than having to continue paying his salary, his 3 hots and a cot, medical, dental, and the cost of a trial.

They'll kill him eventually or he can die by blowing himself into a million tiny pieces like a sick ticker tape parade gone insane.

I think he is doing it for attention, to antagonize, and to be a legend in his own mind. It worked half way, as we are all now discussing it.

Well he has rampaged and killed for his ideology and religion, so it would fit into his mind's world, I would imagine. I wonder if he will get an answer and even if accepted then what? Does he think the US will release him to go there? Does he have aspirations of becoming the vice caliph (pun intended)?
edit on 28-8-2014 by aboutface because: (no reason given)

With his PhD education and all, he could easily be an instructor on how to murder indiscriminately and without remorse.

FIne, get the video gear:

1. Force feeding of pork and shrimp dinner televised for all to see.
2. Crowd sourced Lottery (save the vet's money) for one of our wounded vets to be the person who can don a balaclava and sever his head using a Guillotine that was dripping with pigs blood.
3. Burial with coating of pigs blood and a sign letting the OTHER side know what waits for their chance at martyrdom.

Say what you will about these, some would call, heavy handed tactics however, they work. If you think that you can simply reason with these people and expect that they will give up the chance to have power, admiration and money, then you are quite simply foolish.

BTW: I do understand the difference between the majority of the people and the atrocious actions of the minority; this is directed at that minority regardless of race or religious values.
edit on 28-8-2014 by notmyrealname because: BTW

originally posted by: DarknStormy
Send him off with the next aid drop tied to the part of the box that hit's the ground first.

have i ever said i like the way you think sometimes?


I'm just perplexed how a American can fall for this kind of ideology/zealotry.

I have been trying to figure that out myself, you could expect it from some hardcore terrorists, but how do westerners get recruited,with more passion and intensity, and seemingly more blood thirsty?

originally posted by: Bone75
So can we finally declare what he did a terrorist attack now?

Wouldn't it be funny if ISIS really took over the territory which they claim and called it an official state with real elections, Presidents and prime ministers and people like psycho Hassan running the country?!...I wonder where their first official visit of an another country would be and how do the other countries treat them as politicians...Imagine Al Baghdadi and a bunch of other waste of space victims of ADHD giving a peace speech at the UN...If the world let that to happen I will totally loose my little remaining trust in people and perhaps god as well.

I would have been more than happy to have given him a size twelve help out the door.

Shove a GPS locator up his hairy butt and send him along on his merry way, I say.