Stonehenge.A random pile of stones or an almanac?

posted on Aug, 28 2014 @ 06:27 PM
link
Stonehenge. Is it a significant part of our history and evolution, or just a random collection of stones in a field? Tourists travel from all over the world to see it and we still don’t know for sure why it’s there, or indeed if it has any significance at all. It doesn’t seem to be associated with an exact event in history, or even one particular person and can’t be proven to have been built with a certain purpose in mind. But it still draws in plenty of visitors who are happy enough to look at something that has no apparent meaning or even story attached to it.

It is thought to have taken roughly 600 years to build starting in about 2600 BC using spotted dolerite bluestones from the Preseli Hills (or later believed to be Carn Goedog) which is about 150 miles away in South Wales. There is much controversy as to how the stones were transported from their origin to their final resting place. They are believed to have used rafts to float them up the Bristol Channel, along the river Avon and finally onto land in what is now Amesbury a couple of miles to the east and along a pathway called ‘The Avenue” for the last part of their journey.

Situated in the county of Wiltshire in the south of England and just ten miles north of the town of Salisbury, it gets seen by a VERY large number of passing motorists every day as it’s just 100 metres to the north of the very busy A303.There are no parking places on this road, so any potential visitors have to use the parking provided at the English Heritage run visitor centre a short distance away. It is owned by Edward Seymour the first Duke of Somerset but funded by the Heritage lottery fund, so why did I have to pay what a consider an expensive £14.90 to get in to see the stones?

The old visitor centre was considered to be something of a disgrace and not something we’d want first time visitors to England to remember us for, and from the state of the toilets must have been built shortly after the monument itself. It was just over the road (The A360) from the stones and could be reached with a walk of just a few minutes via a tunnel under the road.

It has finally been knocked down and has now been replaced by a £27 million purpose built building that was opened at the end of last year. This is about 1.5 miles to the north west of the old one at Airman’s Corner with access to the stones either on foot along the road, over The Cursus using the sign posted Stonehenge Trail, or during the busy season on one of the many shuttle buses that run between the two sites. I have to say well done to English Heritage for putting the new visitor centre out of sight of the monument in an attempt to put it as much as possible into the sort of isolation it would have been in when it was built. The eastern end of the A360 from the old visitor centre to the A303 has been dug up and will soon be nice fresh green grass again, and the section of this road from the stones to new visitor centre is now closed to the public and is only used by the shuttle buses when they’re running. This just leaves the A303 stopping it from returning fully to it’s tranquil past. There are various plans in the pipeline including putting into a tunnel for a mile or so and making a deep cutting in the ground that would only have the road visible from directly above, but as yet nothing has been decided or approved.

The only real complaint I have is the lack of any sort of signs such as ‘This way to the stones,be prepared to walk 1.5 miles’. In fact there were no ‘This way’ signs of any kind, so I followed the people in front of me who were probably also hoping the people in front of them were also going to the stones and also no idea of how far it was. It was pretty obvious from the shuttle buses that went past every five minutes or so that this was the way to the stones, but I still have to mark them down a few points for the missing signage. I’m not complaining about having to walk, as you see from the photos it was just the most fantastic weather with amazingly photogenic clouds. In fact you really do need to walk this if you’re don’t want to miss a lot of the other features that sometimes get over looked such as the Cursus.

The first sight visitors see of the new building…… 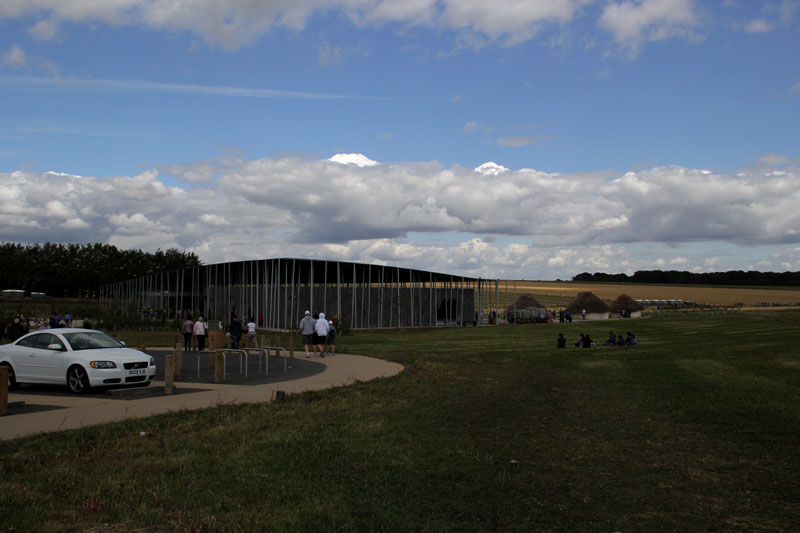 A modern reproduction of an original stone as used to build the Henge showing how it was transported….. 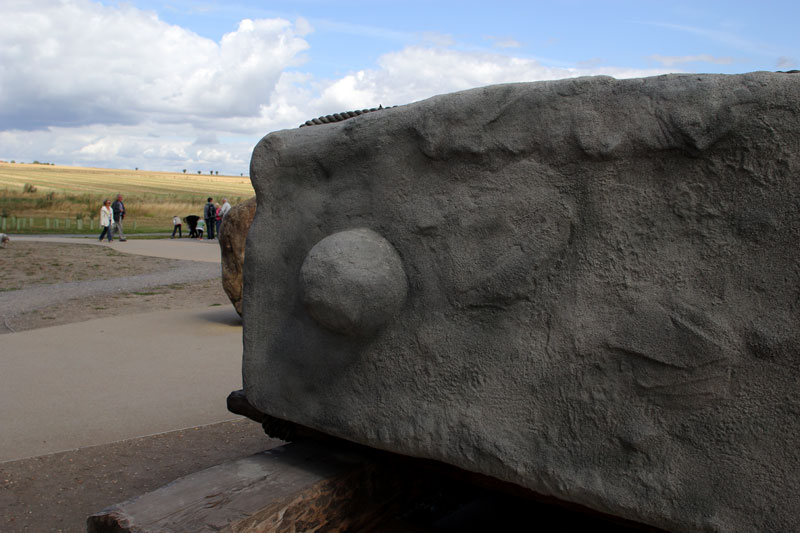 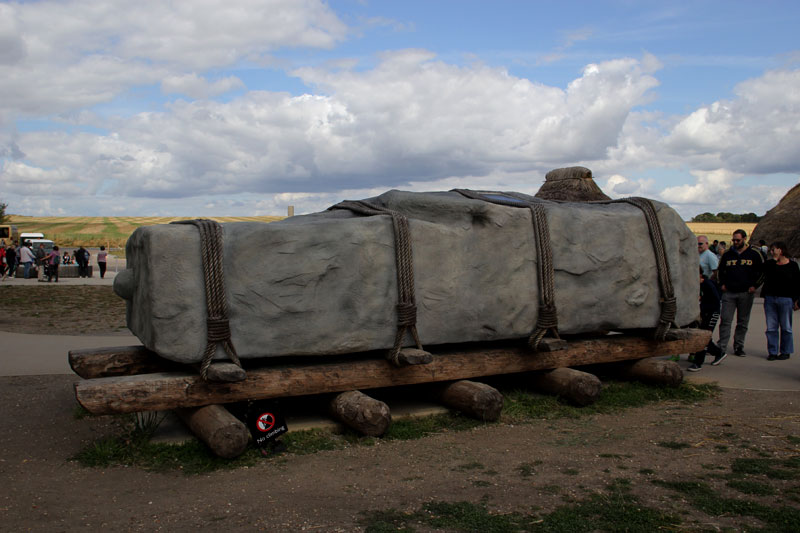 Why don’t we walk along this anonymous unsignposted road,it might go to somewhere interesting? 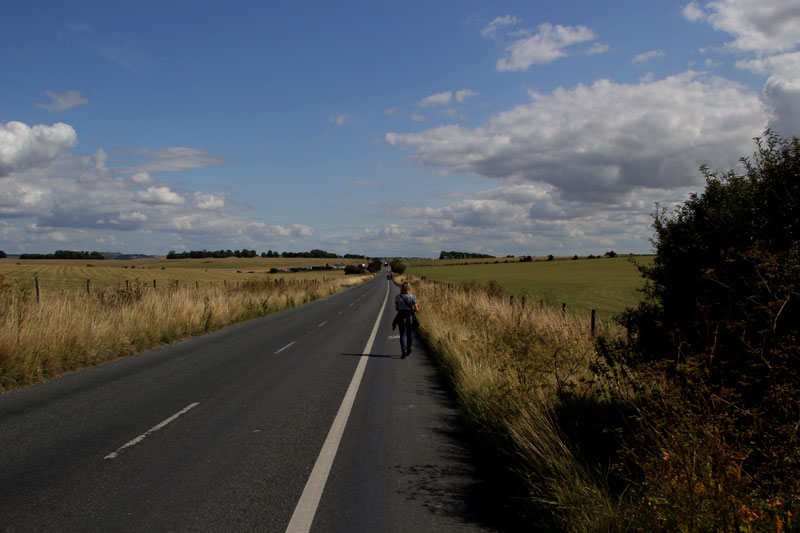 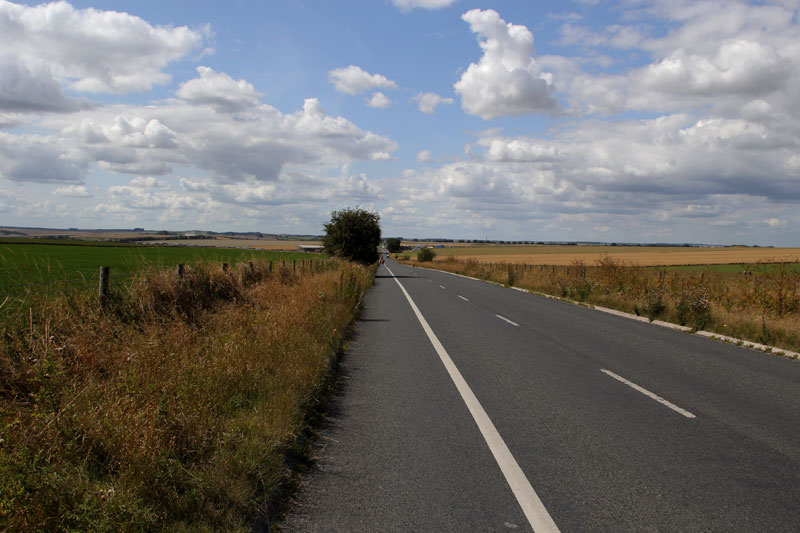 I wonder where they’ve been? 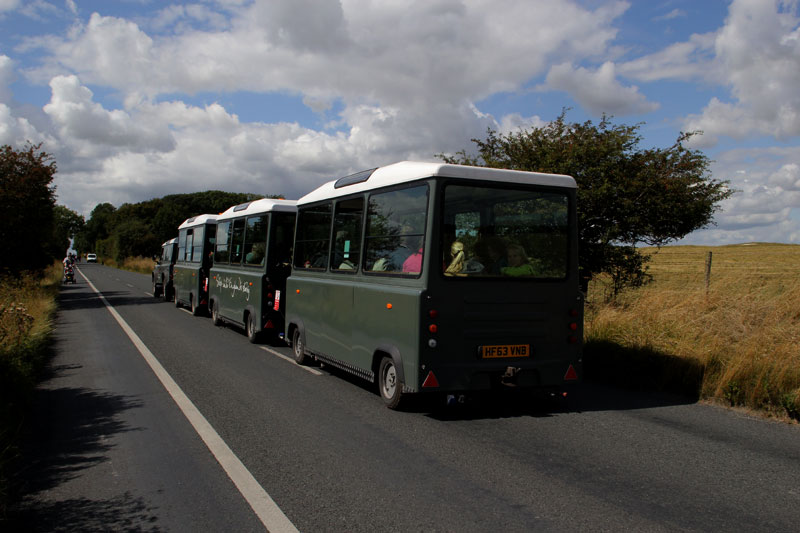 This lot must be lost, they’re walking the other way….. 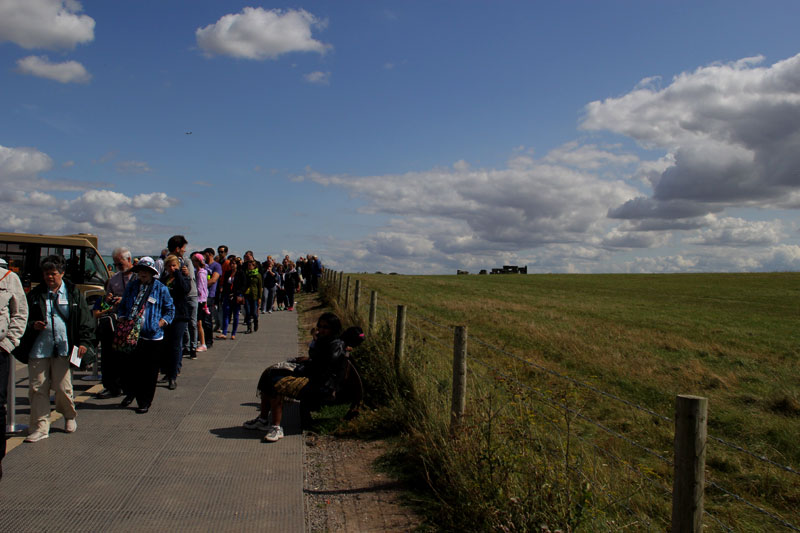 Are we there yet dad? 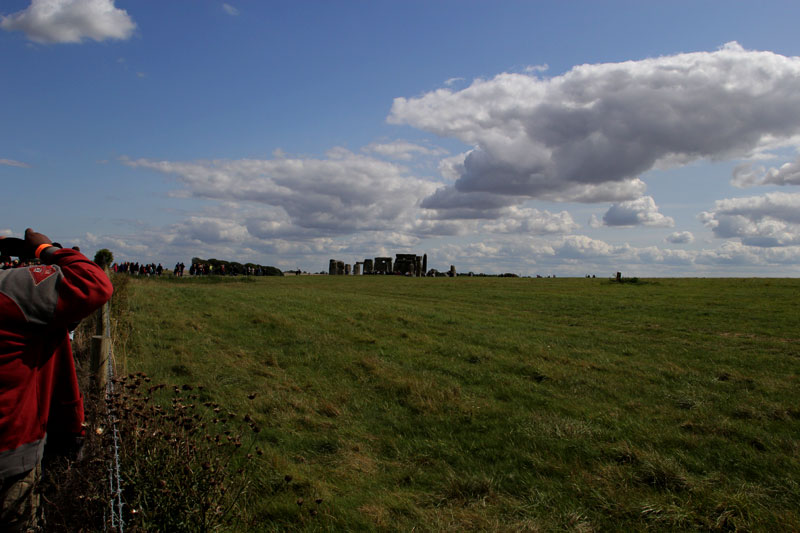 Yes son,yes we are there! 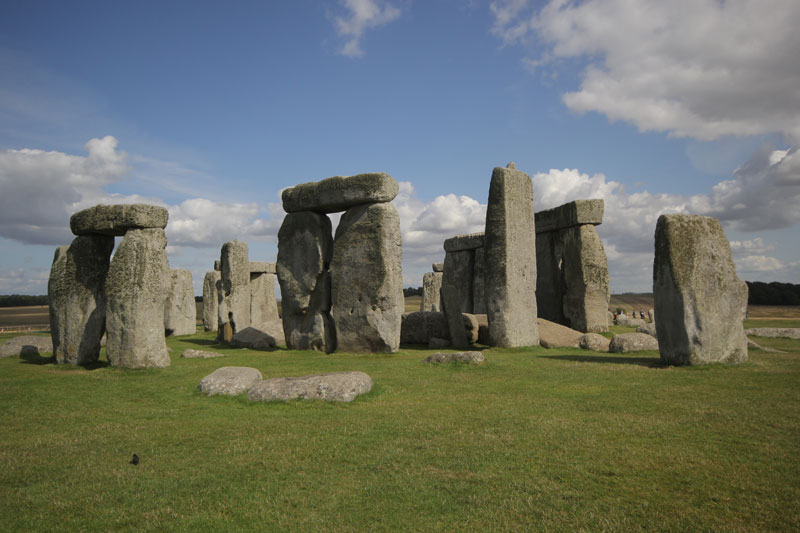 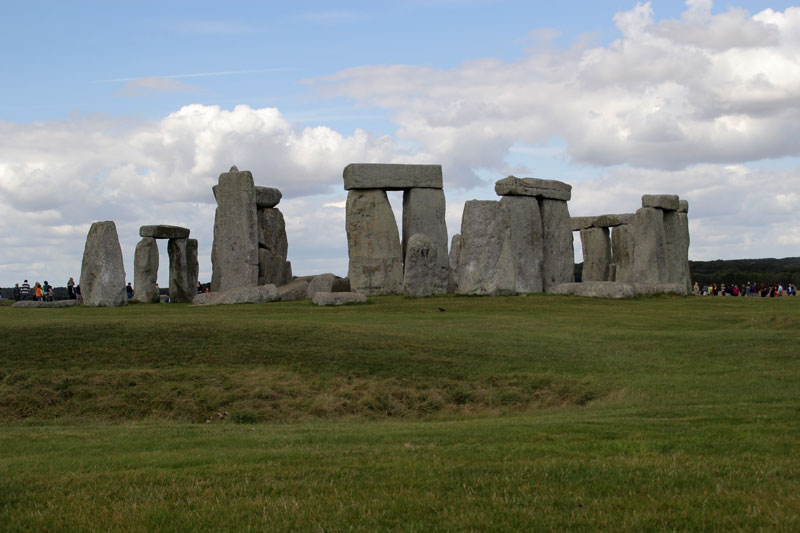 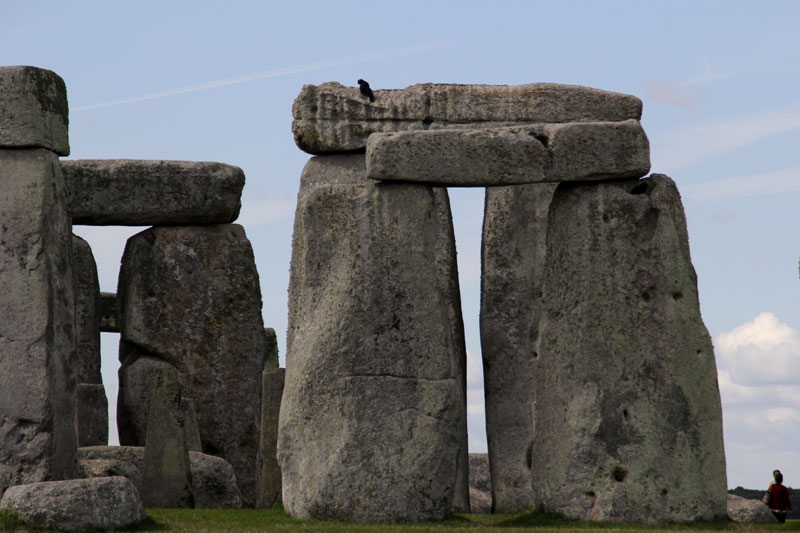 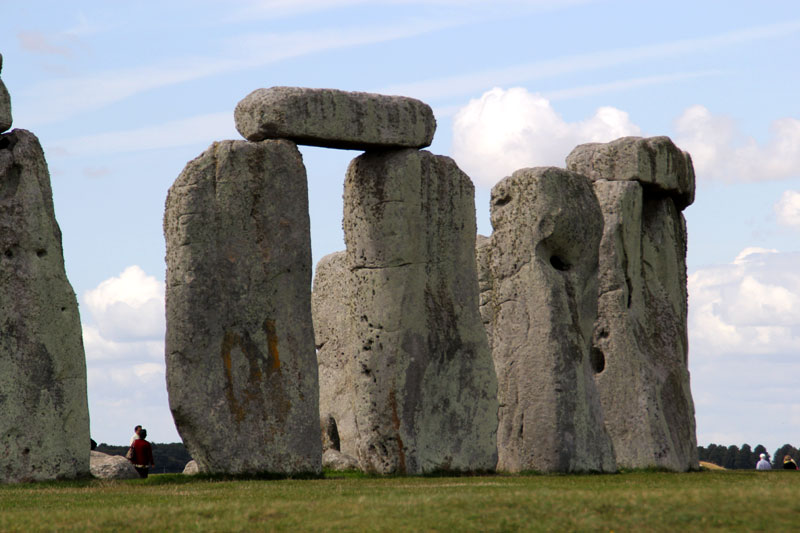 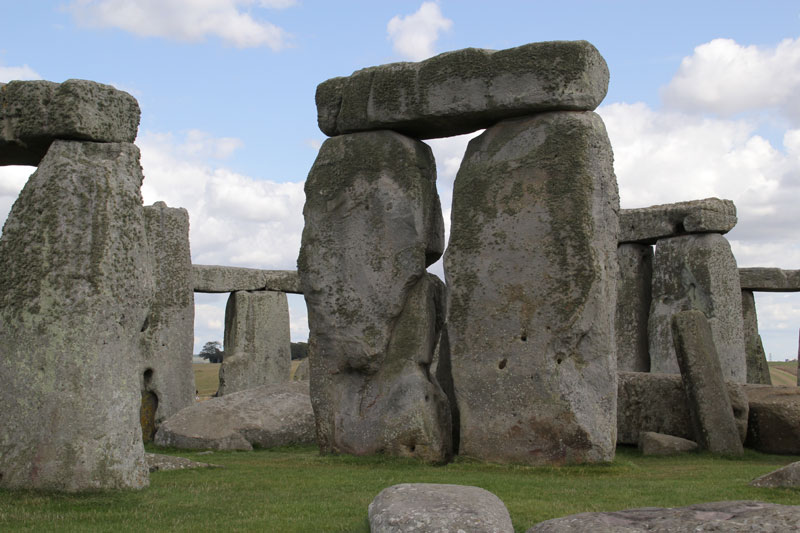 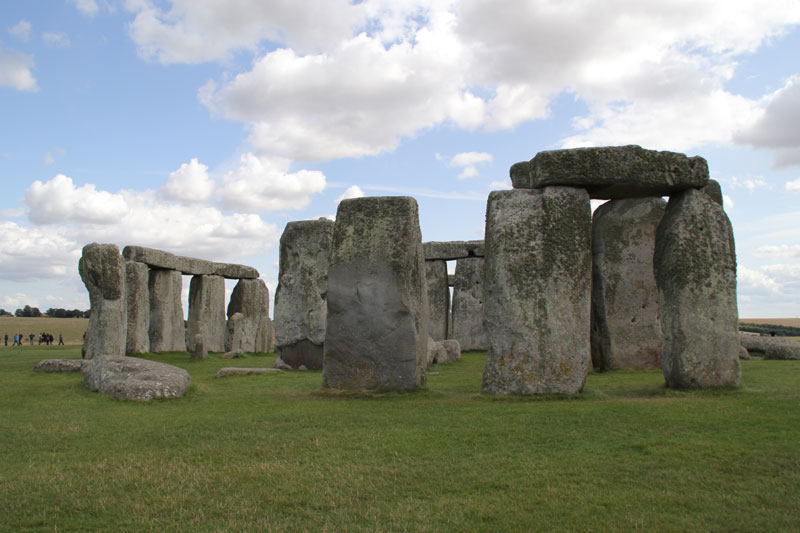 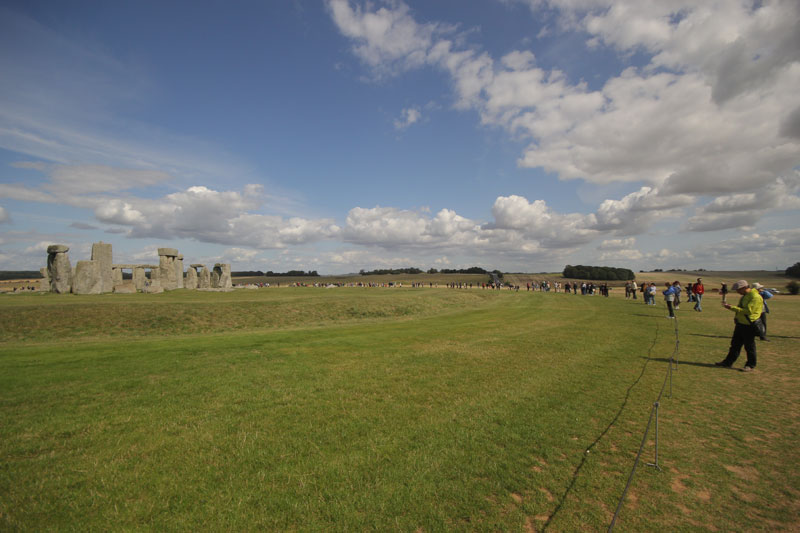 A view towards the south. The road is the A303 which MIGHT be ‘lost’ one day and the field immediately behind the couple on the bench is where the famous Julia set crop circle appeared back in 1996….. 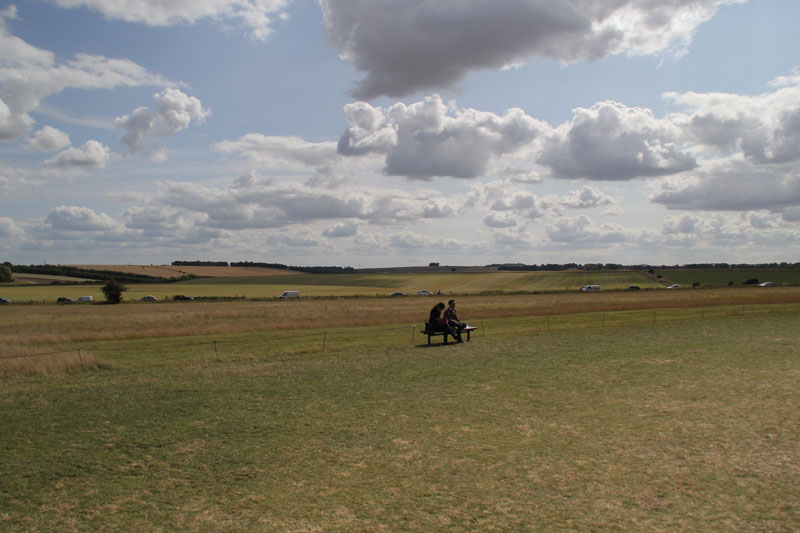 This is all that’s left of the eastern end of the old A360, soon to be grassed over…… 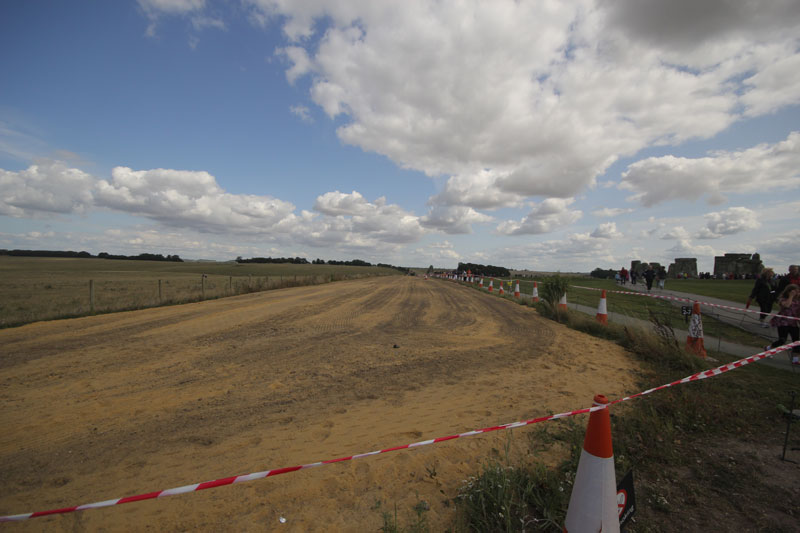 Taking a different route back. This is the start/end of the Stonehenge trail that takes you up towards the Cursus and past the burial mounds…….. 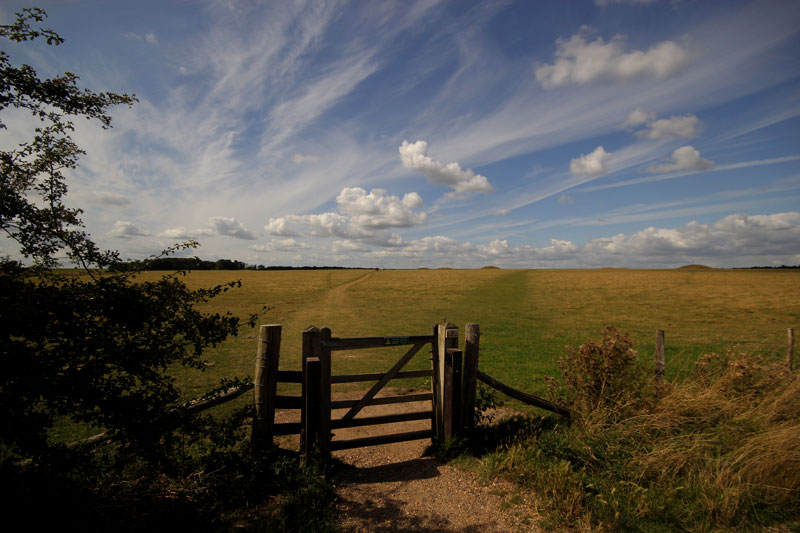 Gradually climbing and looking back towards the Henge…. 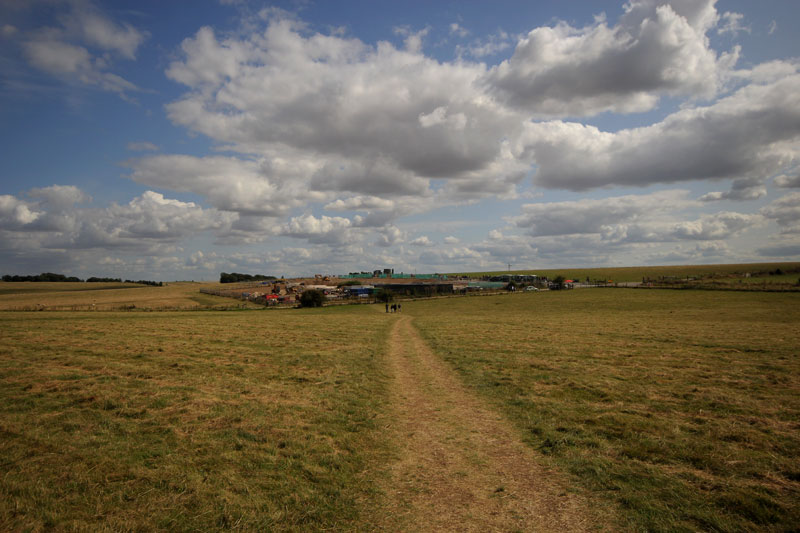 Just about to reach the Cursus….. 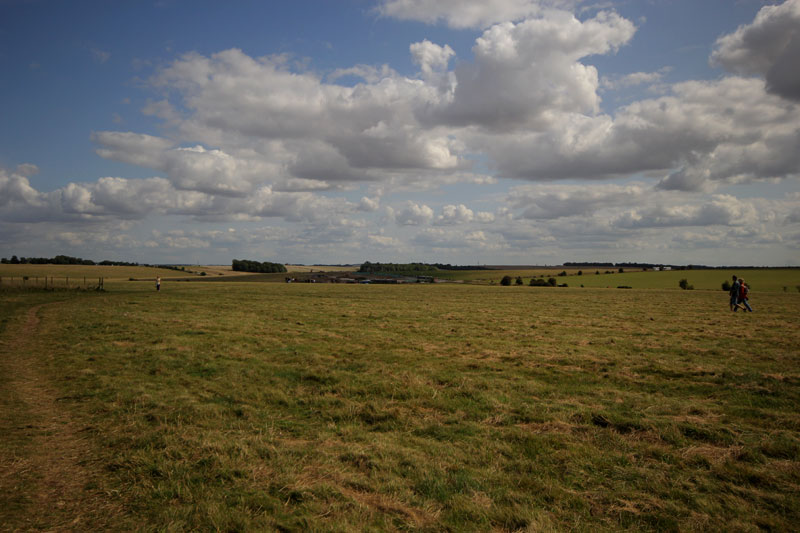 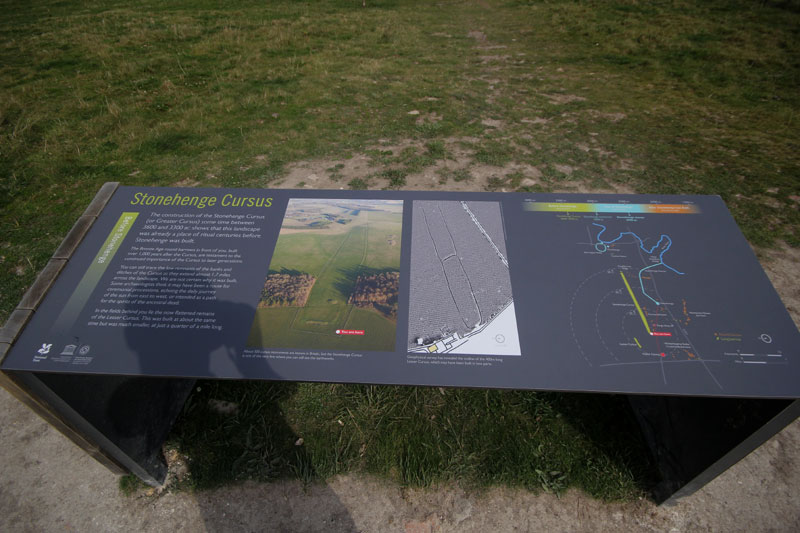 The other end of the trail, the Cursus is through the gap in between the two lines of trees….. 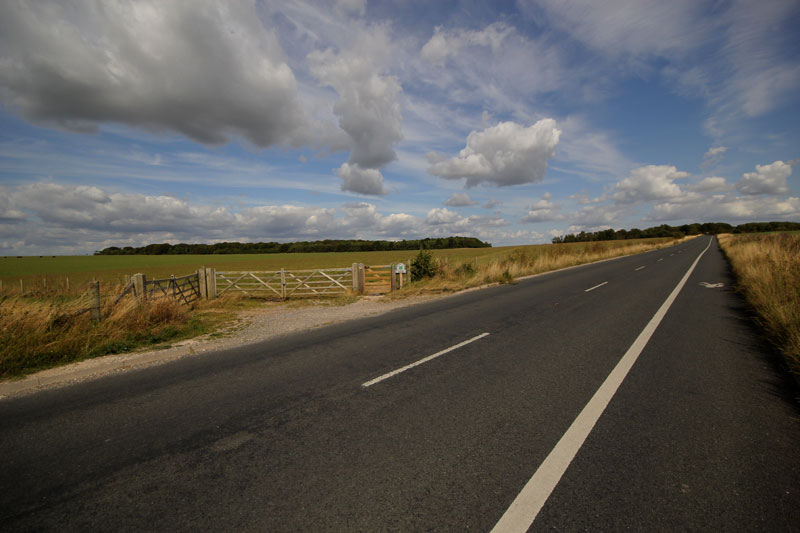 Almost back at the visitor centre and some fabulous clouds….. 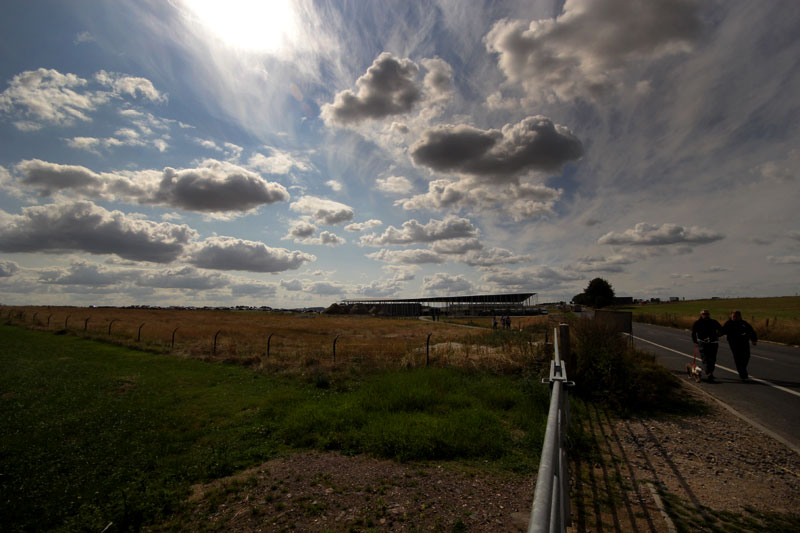 They even built a small Neolithic village to give us some idea how they lived when the Henge was built…. 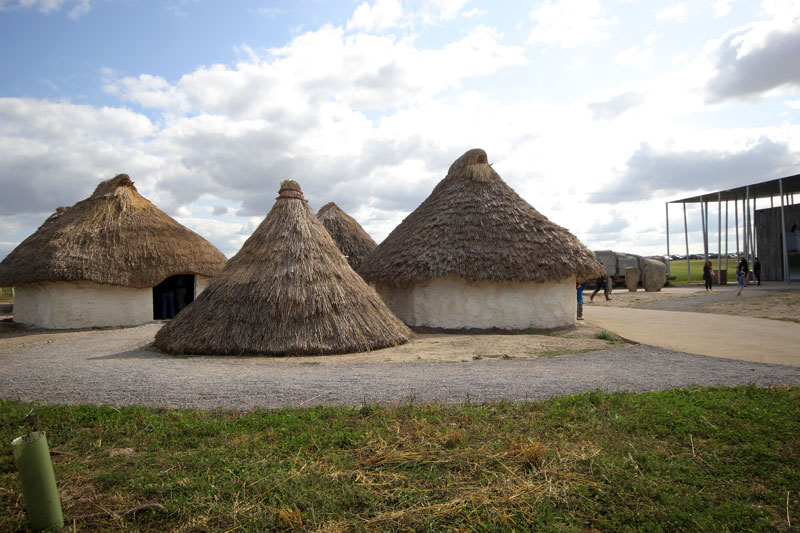 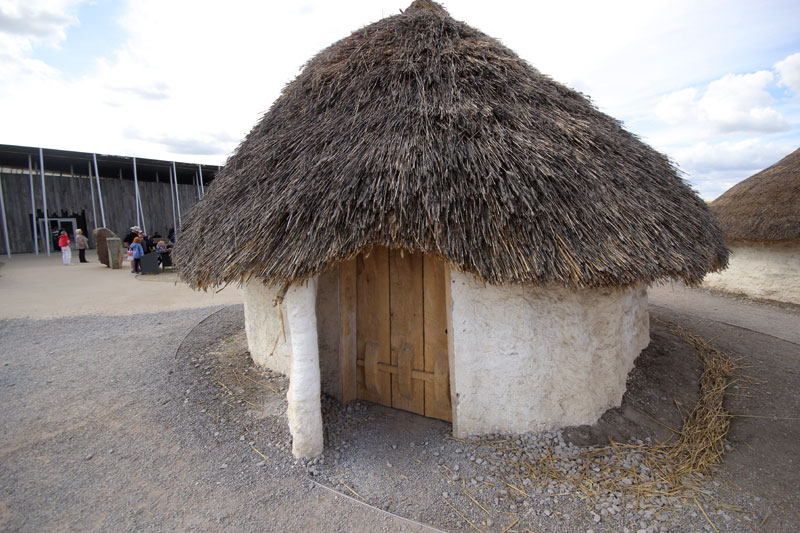 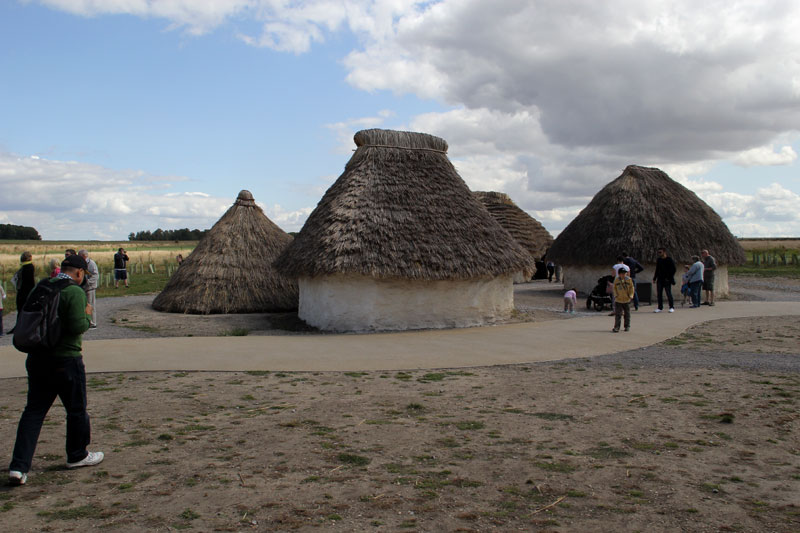 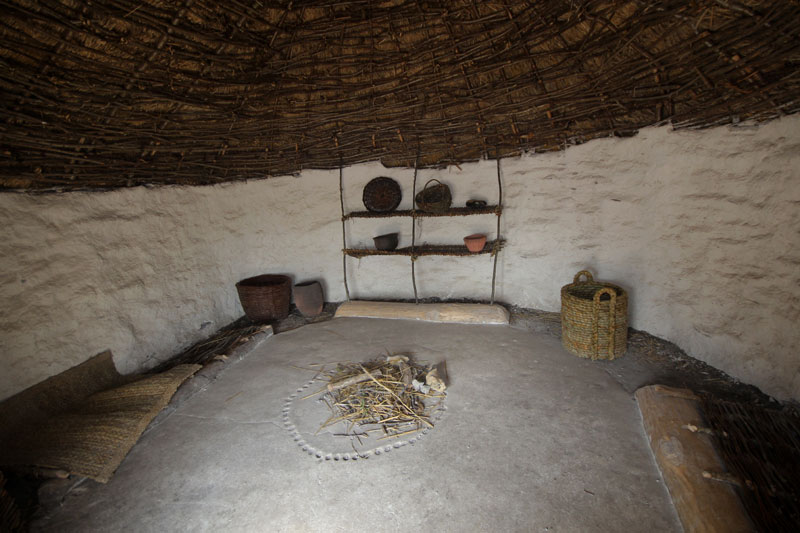 posted on Aug, 28 2014 @ 06:28 PM
link
Ok then, I’d like to finish with my thoughts about all this. First of all it’s somewhat underwhelming. It’s smaller than I was expecting (but not small in a Spinal Tap kinda way),I was expecting something massive that would tower over me and fill me with awe. Instead it filled me with a sense of ‘is this it?’ It doesn’t even look old, it could have been built 100 or 1000 years ago.

It wasn’t built with an exact astrological or astronomical purpose in mind as it’s too random and haphazardly thrown together. I doubt if it was ever going to be given a roof and turned into a mausoleum, no particular reason other than errrmmmmm….

Although it’s not in the worst position in the surrounding countryside, it’s certainly not the in best one. This is something you only get from actually walking around the site and won’t really see from photos. If it was meant to have some sort or religious significance it would normally be built at the highest possible point so it would have the best view possible of everything around it. This either for a tactical advantage (the army with the highest ground will win any battle right?), or just for the fact that the more important you are, the higher you need to be to look down on lesser people than yourself. If it had been built roughly ¾ mile to the North West in the middle of the Cursus, it would have been quite a bit higher than where it is now with a much better all round view.
For this reason I believe the Henge to have been built where it is because that exact spot is significant to just one person. A king or tribal leader could have died there, either in battle or just of old age. There have been excavations carried out in the past that have found old human remains buried in the very centre of the stone circle, but I reckon that until the full results of the work detailed here are published, we’ve barely scratched the surface of what is lurking just below the grass.

posted on Aug, 28 2014 @ 06:39 PM
link
Stonehenge is obviously a homage to tooth extraction. And unlike signs and billboards today was for advertising early dentistry.This is widely known by archaeologist who find molars,wisdom teeth and fangs all around the site.

Great pics , thanks . I too , realized that the whole thing has been a bit misrepresented . I know little about these people ( the builders ) , but - I know a great deal about construction . To answer your basic question IMO : nobody moves a multi - ton rock ten feet ( even today ) without a hell of a good reason. A very very important reason to someone .

Did I miss something? I didn't read anywhere that it was for an almanac.

posted on Aug, 28 2014 @ 08:12 PM
link
Next time take me too! Those are awe inspiring pictures. Did the building have any books on the site? Smithsonians usually sell tons of material to go with the artifacts on display.

edit on 29-8-2014 by Annanu because: I am not well versed in posting, so I read my first attempt and it didn't contain what I had written, so I made a second attempt

and heres the addy.

Did I miss something? I didn't read anywhere that it was for an almanac.

No you didn't miss anything,it was just a random word I thought I'd throw into the title.

originally posted by: Iamthatbish
Next time take me too! Those are awe inspiring pictures. Did the building have any books on the site? Smithsonians usually sell tons of material to go with the artifacts on display.

Thank you and yes the visitor centre is VERY well stocked with all kinds of memorobilia to do with Stonehenge including books,mugs and T shirts etc etc. Smithsonian don't have anything to do with the site though, they just published the details of the most recent survey.It's run and managed by English Heritage.

Here's a link to some higher res versions of my photos.....

posted on Aug, 29 2014 @ 03:01 PM
link
Thanks to everyone else who replied. Since last night I've had some more thoughts on the significance of the stones,I'll do a bit more research and let you know ASAP.

posted on Sep, 1 2014 @ 06:41 AM
link
I guess its pointless to make astronomical calculations using a structure which was rebuilt in the early 1950s 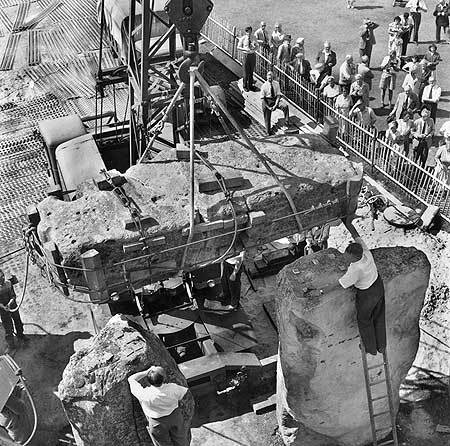 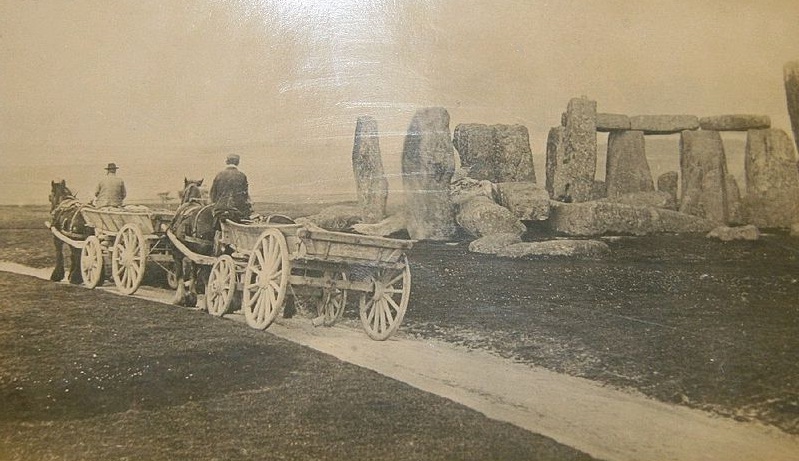 posted on Sep, 1 2014 @ 04:24 PM
link
a reply to: rowanflame
Thanks for that.I did kinda remember reading about the 'henge having a FEW repairs done to it in the past,but it wasn't until you prompted it and I went and had a Google that I realised exactly why I had the feeling of looking at something that wasn't as old as it was claimed to be.

Is this any different to restoring a great work of art,has it actually lost something it had before rather than gained it?

posted on Sep, 1 2014 @ 04:50 PM
link
You should go visit during one of the two solstices every year, crazy festival vibe with drums, guitars, pan-pipes and dancing within the stone circle. I was shocked how warm the stones were after soaking up the summer sun when I touched them for the first time without the 20 metre exclusion enforced throughout the rest of the year.

...whatever their purpose, us non-conformist Brits still have a communal party there twice a year, I like that.