Simply tell the cops your name...what is so wrong with this folks?

See here's the thing. I've been through this a few times.

In the real world, this is how it happens.

The cop ASKS for your ID, they have no legal reason to see it.

The cop DEMANDS your ID they got you for something.

Cops aren't the be all end all of the law, they just enforce the law, you aren't doing anything wrong, they have absolutely no legal reason to demand an ID

If you tell them that you have a legal ID on you, you have no obligation to show it, if you are not in the middle of a crime.

In the real world? Man, you are very full of yourself. Telling me how the real world is like I am a 13 year old sheltered girl or something.

I don't care how many times you have been through it. (I call BS on your story also but it is a nice narrative...the cops quickly walked away....hahahaha)

In this real world you speak of, cops are not all bad. I am sure you think that if they tried to cuff you somehow you would either tell them to stand down or beat them all up and escape.

If a cop asks for your ID they are doing just that. Like a traffic stop. They ask. There is no demand. Only ask. If you have done something wrong you 'think' it is a demand and by your actions they can usually tell if you need further action.

The police enforce the law and you as a citizen are supposed to follow it. If you are doing nothing wrong what is the big deal with telling a cop your name? When you do not it raises suspicion and THAT was the main part of this OP. If he would have just given his name, moved on and got his kids he would be home right now getting high. I think I would rather be at home than telling my story to a cellmate about 'acting the fool' and getting popped.

People like yourself make their job harder and also harder for us would simply, when we have done nothing wrong, give them our ID.

Sad day in America when police think your a criminal and citizens think your stupid for simply excercising your rights. Why not just scrap the Bill of Rights, besides if our doing nothing wrong you have nothing to worry about.

It is a sad day in America. People used to be law abiding and cops used to be like Mayberry but the world today does not allow it. 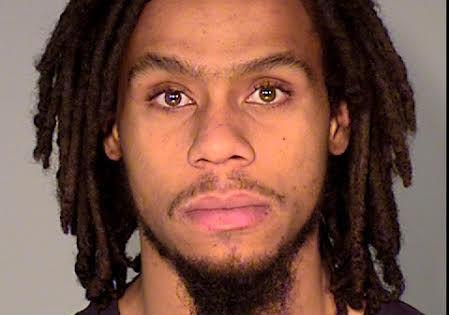 At 9:43 a.m. on January 31, police were summoned to the skyway in downtown St. Paul's First National Bank Building on a report of a man loitering. The video footage shows an officer asking the then-27-year-old man to provide his name.
*****
The police report says the man was arrested on suspicion of disorderly conduct and obstructing the legal process. Here's the St. Paul PD's official version of events:

Squad 524, M. Johnson/ 526, B. Schmidt were called to the First National Bank Building (332 Minnesota) on a report of uncooperative male refusing to leave. Officers later made contact with this male... who refused to cooperate and would not give his name. He was later arrested for Trespassing, Disorderly Conduct, and Obstructing Legal Process (Citation #620900211109).

The man was charged with trespassing, disorderly conduct, and obstructing the legal process, but those charges were later dropped.

On Twitter, the St. Paul PD's public information officers said no formal complaint has been filed in connection with the incident.

Maybe he fit the description of someone who just stole some cigars nearby?

That's exactly why you don't give your name. Why should an innocent person walking along put themselves on a suspect list? Not to mention the crap they can pull up on you in a matter of seconds. "Oh this person speaks out against bad cops? I really like this person for that robbery."

Ok, so police were called on for someone loitering. It was not random.

Na, see, here in the real world, not all cops shoot to kill, or beat your ass for standing up for your rights.

I'm an Ass but, I know how to play the game.

Stand up for your rights, but don't open yourself up to be victimized.

Don't threaten a cop, but don't let them intimidate you. You have to remember that they were just humans, just guys doing a job.

Stand up for yourself, but don't cross that thing line they want you to cross.

Ok, so police were called on for someone loitering. It was not random.

Yes, I've been saying that repeatedlyhroughout this thread.
See my responses for how I view the situation.
edit on 8/28/2014 by AllSourceIntel because: grammar

I was simply confirming.

I was simply confirming.

posted on Aug, 28 2014 @ 11:37 PM
link
I can only speak for the laws where I live, which is in Texas. If a cop walks up to me and asks me my name, or asks me for ID, I don't have to provide it. There are certain circumstances where I would be required to, but generally speaking I do not. If it is a traffic stop for instance, then of course I am required to provide ID. There was this rumor going around, at least in Texas, that people had to be able to ID themselves, or something of that nature. But Texas law, at least from the research I've done, states something along the following lines: a person is only legally required to give their name when they are being detained. If you are being arrested I also believe you have to give an address, but it has been a while since I've looked in to the issue.

So if someone chooses not to give their name, and they are legally within their rights to refuse to do so, what difference does it make if the officer feels you are being uncooperative? That is not evidence of guilt or wrongdoing by any means. Exercising your rights within the law should never be used against a person. To do such a thing is a violation of that person's rights, which should be a very serious crime, yet often such violations are ignored or treated as not being a big deal. It is a huge deal in my opinion. "Rights" are the very foundation of our society. When rights are thrown out in one way or another, the very ideals of America are being trampled upon.

A police officer has certain laws they must act within, rules and regulations, and so do the people. Therefore if a person is within their legal bounds, it shouldn't matter if they choose to cooperate by giving their name. One can claim that the person is just causing trouble, but this is not the case. Sure, it would be "easier" for the cop to cooperate, but if it is not legally required under the circumstances as per the law, one cannot claim the person refusing to cooperate is in the wrong. Just because someone personally feels that giving their name or cooperating would make things easier, that is an opinion. For some, exercising your right to not provide a name would be considered easier, or the right thing to do. So it is opinionated. The IMPORTANT thing is behaving within the bounds of the law, no?
edit on 8/28/14 by JiggyPotamus because: (no reason given)

originally posted by: minusinfinity
maybe a way to stop the problem is to not break the law.

i have had many black friends who never got questioned by the police.


Bull chips ! simply walking while black is not acting like a criminal and it have dick to do with dress either, I have seen white kids dressed in all kinds of attire from Hip hop wear to imitation of their favorite metal head band and even Ska Punk and they never got rolled up on the presumption here is they are harmless and why not? because they looked like your neighbor's kids going through normal teen stuff but black teens or grown-ups are suspects look at the difference on this believe me there is no waay in Dante's hells he would walk away if he/they were Black.

Now I am not saying that White folks never got beat,harassed or shot unjustly by the cops it does happen but rarely to those who they perceived as having power.
Very different from below.

originally posted by: matafuchs
I hate bad cops. With a passion. however, since I was a kid, if an officer asked me what I was doing or for ID I gave it up because i was doing nothing wrong. I teach my children to respect them. They are the law. Plain and simple.

Depending on the state if a cop asks you for ID you are under no obligation to provide it. It's essentially the old "papers please" approach.