WHO Warns Ebola Outbreak Could Hit 20,000 Within Nine Months

Seeing as winter is just around the corner for most of us how does the Ebola virus stand in cold weather?

originally posted by: Sparkymedic
a reply to: loam

Considering about 60000 ppl die from car accidents per annum in the US alone, I don't see how this is any worse. And yet the amount of money spent on curbing senseless deaths from vehicle collisions is miniscule. Yeah, contagious disease sucks, but so do most drivers on the road. Fear mongering much WHO? That said, I hope Ebola doesn't explode to epic proportions.

Comparing an Ebola outbreak to car crash victims really isn't an apples to apples comparison... For one, when a car crash happens the event is over, it can't spread to other cities/states/countries like an ebola outbreak can... Its not like we would ever see some car crash epidemic, but ebola spreading at an alarming rate could make things very interesting world wide...

posted on Aug, 28 2014 @ 02:25 PM
link
"Throwing money at it" is rarely the best solution for any situation. It does allow for those collecting the money to have a nice 'credit limit' though..

Perhaps a more effective method would be to crowdsource the needed resources directly instead of relying on their proprietary, insular network and vast sums of untrackable fiat money.

posted on Aug, 28 2014 @ 02:32 PM
link
I thing that if we take in account all the underreported cases, more than 10 thousand people already got infected.
And, as a matter of fact, after reaching 20.000 infctions, how on Earth they intend to stop the spreading of the disease worldwide?

originally posted by: fwkitziger
Yes it is exponential and we will hit reported 20,000 cases in November. Check out Ikonklast's charts here:
www.abovetopsecret.com... 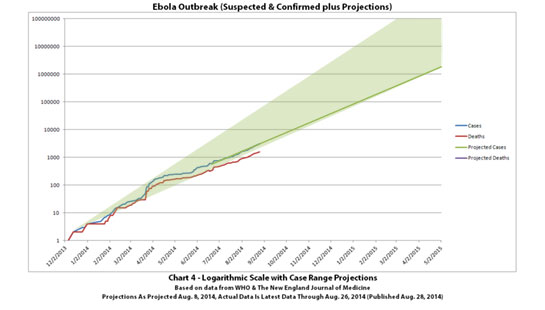 
originally posted by: fwkitziger
Yes it is exponential and we will hit reported 20,000 cases in November. Check out Ikonklast's charts here:
www.abovetopsecret.com...

I am saying this since the beginning, you never know how much of the cases fly under the official radar and are never recognized.
Especially in this lesser developed countries.

Africa has become a ward of the West for too long now. It's just like when you keep bailing your kid out of financial trouble, they never learn and they become poorly adapter adults. A good parent knows to let their kid learn the hard way sometimes. I know people will say that's a horrible view and "these are humans!!."

It doesn't matter, human behaviour/thought patterns are based around millions of years of natural selection and let's face it; nearly 100% of humanity's serious problems stem from our refusal to acknowledge what we really are, and refusing to let nature do it's thing.

As if the funds aren't going to end up going in someone's pocket-like those "feed the children" scams.


Right.....until it's YOU or one of your family members that gets the disease and dies.

Then it will be....."Why didn't someone do something

I disagree. I've read that many Africans have some kind of fungal infection from a common food they consume, and this compromises their immune systems. All they need to do is stop eating that food and take I think turmeric or cinnamon and it will kill the current stuff in their gut. That alone strengthens their immune system a lot, and then there is also the simple 1unit plasma transfusions from survivors which apparently has an 80% success rate in immunizing against the virus.

These are simple things local doctors can do to stop this outbreak. Oh and getting it through peoples heads not to touch the dead, and start burning the damn bodies!

If a whole continent of people can't make simple behavioural changes for their own survival... well then they've EARNED their Darwin awards.

Do you think it will not affect you?

posted on Aug, 29 2014 @ 10:08 AM
link
This whole thing is being blown out of proportion , Wait till they release a vaccine and then we will be back to square one( buy the Vaccine or you will be doomed ).

posted on Aug, 29 2014 @ 06:38 PM
link
I don't think we really need to fear this, or any other type of "spreading virus outbreak" as long as we can simply prepare for this. There will always be environmental dangers, some accidental (nuclear spills) and some possibly intentional (engineered virus spreads). The end result is the same: we got to take it upon ourselves and prepare for anything that can be flung our way. We can beat this and not be afraid. There are ways to keep yourself free from toxins and viruses, the main way is to stay out of harms way if you can. The next is to keep your immune system strong. Third is to have things on hand that neutralize the threat at hand, in this case ebola. There are a few good natural protectants for this and other viruses too. You can see a few of them here: Ebola Protection

originally posted by: maddy21
This whole thing is being blown out of proportion , Wait till they release a vaccine and then we will be back to square one( buy the Vaccine or you will be doomed ).

You would not have to take it to get protection just as long as most others did.

From your article i quote "but does not prevent the fecal-oral spread of infection. ,,

u know poop.
one of the signs of Ebola,,lots of poop.

I think that the 20,000 mark will probably be hit, but the question is, how is that going to be contained? Is it easier to contain 20,000 cases than the current 3069 cases? It sounds to me like there will be no easy containment, although I wouldn't doubt the media stops reporting on it.
edit on 30amSat, 30 Aug 2014 01:43:32 -0500kbamkAmerica/Chicago by darkbake because: (no reason given)

posted on Aug, 30 2014 @ 02:31 AM
link
I still see this as very bad for Africa but not having the same impact world wide, especially in the USA and Europe, even if it spreads there more than it is now. I think we can contain it. Its a concern but not a world ender. For Africa on the other hand. I do not see this stopping unless a whole slew of cultural practices, change pronto. The big question is. Short of a cure. What can you do about it. If people do not stop doing things that make Ebola spread faster. Massive education campaigns have been going on for years. Money needs to go to a vaccine and nothing else. Its the only thing that can help the countries of Africa that are most infected. I hope someone figures it out soon. Before more people there die.
edit on 30-8-2014 by karmicecstasy because: (no reason given)

originally posted by: karmicecstasy
I still see this as very bad for Africa but not having the same impact world wide, especially in the USA and Europe, even if it spreads there more than it is now. I think we can contain it.

Hypothetical situation lets say it is really bad for Africa and other country's with a poor health system.
How many people with ebola illegally entering Europe and the USA a day seeking a cure would it take for the system to break down?