Australian and American Relations - Can the Friendship Last?

posted on Aug, 28 2014 @ 04:36 AM
link
Australia has a reasonably good Media service. For the most part - We know when we are being Played.
Americans on the other hand are divided by the Left vs Right and the Black vs White media games.

Now Obama has Invited Australia into the "Coalition of the Willing" to attack Syria.

We have no "Dog in this Fight" besides a few misguided "Rebel Fighter Wannabe's". I believe this is hurting our relationship. Also over the past couple of years we have had a huge US military build up in Darwin - Northern Australia.

Many Australians believe this will be the headquarters for a strike on the nearby North Korea or China, leaving Australia as the target for Mass Retaliation.

It's no secret that America and China are on the verge of War - America has an Impossible Monetary Debt to pay back to China, and the rest of the world I might add, and War is the only way out.

What pisses me off is that we - Australia are in the Asia Pacific Region, and we are being Played off against China, Indonesia (Worlds Largest Muslim Country), North Korea and now Syria.

America is also trying to start S#it with Russia with Military Bases all over Europe - this means that just like WW1 and WW2 America will never see the devastation, destruction, agony and heartbreak of War in their homeland - it will just be pictures on their TV screens.

Australia and the informed world are tired of your Military Aggression and Propaganda - When will the American People Rise Up against this Evil that is driving the World against you? - or are you too concerned about Ferguson to look at World Issues?

Wake Up before you lose the few friends you have left.

posted on Aug, 28 2014 @ 05:07 AM
link
Having recently returned back to Freo from New Orleans, I've gotta say, the folks at a local level are no different from us. Collectively, they are however, subjected to more propaganda than us and are consequently acting in contrast to what the majority of people actually desire.

This is by design thanks in large part to the deception that is the 2-party political system........much like us but way more stitched-up as to which muppet is called "President" - lots of propaganda which means lots of discussions about everything from naughty gays to gimme ya guns - keeps them pretty much 50/50.......just like us......but different.

We are all being bent-over and collectively reamed.

But yes, I agree with you - get rid of corrupt politicians, corrupt police, lawyers and any other leech currently sucking the life out of us all.

And start again, this time making sure no-one is left behind.

Can't agree Ding mate. While we may favour the States we have a lot of interaction with Asian countries. Crikey we give Indonesia RAN ships apart from foreign aid and other assistance at our own expense. We don't do this with the yanks.

We don't have a domestic threat from the US. We haven't got illegals from America. Sure, we have US bases and presence but at least they pay for it.

China, well okay their a different matter but really they don't threaten us. Too much interest in Aussie resources. And,,the way I see it, chinese investments in our country is a fair thing. For one, they won't let any foreigners take it from them or us.

Regarless of what others may think of Aussies we are always there for them if asked for help/assistance albeit US, Asia Europe, Africa etc. As an Aussie, when I see things out of order, I would like to see them put into perspective and a bit of house cleaning undertaken regardless of whatever action is required.

If the US want help, if China wants help, if Russia wants help then sure..but there are boundries and the expectation that the same help is repayed in kind. This isn't often the case except for a few reciprical nations.

Bust since the US made us bury our long distance strike force (f111's) so we could upgrade(flol) to f35's(crap and still waiting) the Indonesians have been pushing back.

Ask any Norforce personnel about the indo scouting parties mapping up north, they know because of their tactics used, we trained them.

Unfortunately its never been about the will of the people. Never has, never will.

For a country that suffers from tall poppy syndrome, how the hell did he get so much power??

I guess he saw that people were over the two parties and sidled on in!

I certainly agree with you there CA. Not a great deal more I can say. Other than I would prefer that our aid to other countries would be better suited/directed to correcting our domestic situ first. In saying that I might be digressing from the OP.

With regards to the will of the people. ( The sensible ones I speak of). The disregard for this is obvious to me every morning when I see the news.

Thanks for your reply.

Thanks for your "On Location", now returned response. It's good to hear from an Australian who has lived in America, because it's hard for me to make sense of these strange warmongering people. I'm not sure if this should be in Rant or where I put it, but it's getting to the point where I want to go "Off the Grid" - TSHTF is going to happen soon. IMO.

posted on Aug, 28 2014 @ 06:03 AM
link
I can only speak as an American who has nothing but love for our Aussie brothers and would vote to use the full resources at America's disposal to defend her if Australia was ever threatened.

The American people are not warmongering, we actually have very little stomach for war. The world is a complex place, and the government does not always reflect the will of the people.


Australia has a reasonably good Media service. For the most part - We know when we are being Played.


are you sure about that ?....the media here is just as owned as anywhere else in the world...(although i do get a laugh out of "media watch"

our 2 party system is nothing more than just that...liberal or labour..they all work for the same outcome.....just give me a bucket to wretch in

OK Let me Apologize to the American people for my Rant - It's not you or your Elected Officials, It's the Hidden Overlords who control America, and it's Foreign Policies.

I simply look at him as the latest addition to the collection........rolled out by the TV to the general public at just the right moment to secure the vote.
UNITED AUSTRALIA PARTY
PALMER UNITED - REUNITE THE NATION
PALMER UNITED PARTY 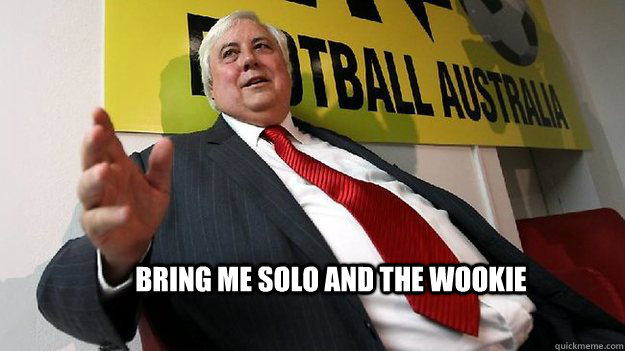 Not really a surprising result when you consider the twit(s) they dished up for options.

posted on Aug, 28 2014 @ 06:14 AM
link
I would prefer to be on Americas side and lose a war with China than win a war as an ally of China or sit on the sidelines while they win a war. I'm no fan of America and they have their problems but at least they know they have problems, can freely speak about them and have much more opportunity to change their situation than most nations.

originally posted by: Dingo80
a reply to: OccamsRazor04

OK Let me Apologize to the American people for my Rant - It's not you or your Elected Officials, It's the Hidden Overlords who control America, and it's Foreign Policies.


No apology necessary, never apologize for asking questions. I can only speak for my side, but everyone here loves Australia and Australians.

posted on Aug, 28 2014 @ 06:17 AM
link
High Five. Luckily it will be 20 or 30 years before America has to worry about losing a war. Just in time for our children to pay the price for the mistakes being made today.

I'm happy with the results even though Palmer is a greedy S.O.B liberal at heart.

I'll vote for another party next time and hope they get in to mess up the system some more. Was totally sick of this two party race...

posted on Aug, 28 2014 @ 06:31 AM
link
In retrospect Australia should have never abandoned its nuclear program or other polices that were designed to keep our nation safe. I feel we are doomed no matter what these days. From within or from external forces. It's only a matter of time.


The American people are not warmongering,

you raise a good point...the majority of people are not war mongers and haters..EG....people assume muslims are haters because those in power are....people assume all of Israel are haters because those in power are...just like Palestine...they must be all bad because Hamas is ...all blacks are crack heads because some are...the list just goes on and on and on....

the fact is 99% of people just want peace and to get along....so the question is when will the people say enough is enough and remove the warmongering haters from power ?

posted on Aug, 28 2014 @ 07:02 AM
link
Your whole problem with America seems to be that you don't want to be involved in a war that you believe is coming soon. That is basically the same feeling America had in 1940. We didn't want to be invested in a war that we were not directly connected with. But I think we knew that war would eventually come to our shores anyway. Japan expanded for resources, china could do the same. That puts you Aussies right in their way. I honestly don't think china wants war because their economy is built on American money, but stranger thinks have happened. Time will tell I suppose.