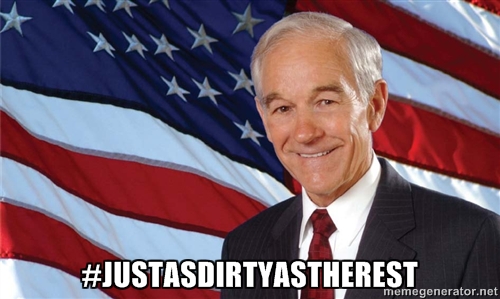 there are no clean hands in politics.

kent sorensen, former iowa senator and bachmann's campaign manager in the 2012 elections, accepted 73K under the table from ron paul to dump his boss. it's easy to be sympathetic, bachmann presents a broad target. but to me this illustrates that you can't trust anyone who wants your vote, if you're up on that podium, you're there because you play the game house of cards style.

ron paul denies the charges, but a conviction is in the pipeline for sorenson, so...

Good luck with this thread, besmerching the name of Ron Paul on ATS is like making fun if Muhammad to Muslims.

Even though he's just as corrupt as all politicians are.

Doesn't surprise me at all that he would play the Washington games, he was in Washington for decades.

posted on Aug, 28 2014 @ 03:59 AM
link
If there was any doubt our government was rotted to the core, let this story lay those doubts to rest. God bless money, err, America rather. USA, USA!

posted on Aug, 28 2014 @ 04:20 AM
link
i'm sad to report it's not any cleaner north or the border. it costs close to 100k to run a LOCAL campaign, that cuts out everyone who can't make the nut, i.e. anyone who isn't already rich and connected. and i don't know, but the personality type that gravitates toward running # also seems to be the type least likely to run # clean.

how about a rand paul/paul ryan double bill? I've got the campaign poster all ready to roll out! 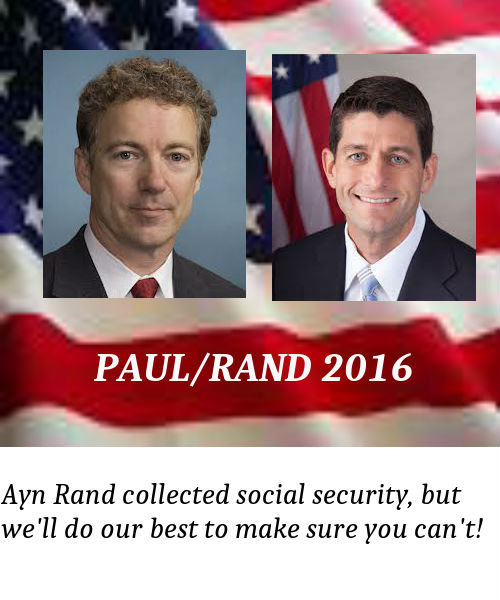 originally posted by: muse7
The dude has his head so far up Ayn Rand's ass that he named his son after her

And here I thought he was an OBGYN — so maybe he was doing it wrong the whole time and that's why he went into politics?

damn, that made my morning.

I like a lot of what Ron Paul has talked about and thought he made loads more sense than any other politicians and this doesn't affect that t all because I still know that he's a politician and NO politician should ever be trusted.

posted on Aug, 28 2014 @ 08:35 AM
link
the only solution is to make campaigns entirely financed through taxation. equal portions to the candidates, and a rubber-glove-plus-lube audit of their personal finances.

Doesn't surprise me in the least to see a revelation like this regarding Ron Paul but to tell the truth, I hadn't heard about this particular case until now. Thanks for posting it here for all to see.

For me, the really sad part is having to come to grips with the fact that there are people who would actually pay 73k to get the backing of anyone who previously worked for and/or supported Michele Bachmann. I still haven't gotten over the fact that there's enough like minded ding-bats in Minnesota's 6th District to get her elected to congress in the first place.

But hey, when I look at the current roster of U.S. Reps. from my home state of Texas, it's not one damn bit better. I think we single-handedly contribute more nut-jobs to the House of Representatives than any other state.

I'm beginning to wonder if that "head up the ass" condition, referred to in muse7's post, isn't contagious and whether or not it's spread doesn't pose a bigger long term threat to America than say, Ebola. At least we can treat Ebola, but what did Ron White say? "You can't fix stupid!"

Thread title notwithstanding, its clear that Ron Paul didnt bribe anyone. Every source on the matter says the Ron Paul campaign.

Nowhere is it mentioned that Ron Paul was involved or even had knowledge of this. Although it wouldnt surprise me if Jesse Benton was involved.

You'll also notice that Sorensen took money from the Bachmann campaign, but that part of the story isnt making the headlines.

Apparently, Sorenson resigned over his illegal dealings with the Bachmann campaign. He's been granted immunity on that matter so who knows what really happened in exchange for his plea.

Smells like a preemptive strike on the Paul name prior to 2016.

originally posted by: ATODASO
a reply to: muse7

how about a rand paul/paul ryan double bill? I've got the campaign poster all ready to roll out!

There is just something really odd looking about Rand Paul.

Can't put my finger on it, but I find him physically disturbing.

Weird, I am just not the type person who judges someone on their looks. Anyone else have that kind of reaction to him?

I love this, I absolutely love this.

This is just one more example of Ron Paul being full of crap...but I doubt his followers will hold him responsible for this...they will just blame the campaign manager.

The best part of it all...Ron Paul supporters think they are the ones who are the most informed...LOL.

This has been an issue around here for some time and many believe this originated from Paul's campaign manager, who is now running Sen. McConnel's campaign....not Ron Paul.

So I would wait a bit longer before you jump on the anti-RP bandwagon.

originally posted by: kruphix
a reply to: ATODASO

I love this, I absolutely love this.

This is just one more example of Ron Paul being full of crap...but I doubt his followers will hold him responsible for this...they will just blame the campaign manager.

The best part of it all...Ron Paul supporters think they are the ones who are the most informed...LOL.


The blame may lie with the CM and with the head of the Iowas gun rights association. The "rumor" is that the CM was going to get some kickback from both Sorenson and the other guy (Believe his name is Carr).
edit on 8/28/2014 by sheepslayer247 because: (no reason given)

posted on Aug, 28 2014 @ 12:38 PM
link
I agree with gladtobehere 100%. To the uninformed person, who obviously buys into what our LYING media says WITHOUT DOING HIS/HER OWN RESEARCH, Rand Paul was NOT named after Ayn Rand. His name Is RANDALL Paul; in his younger day he went by Randy. His wife shortened it to Rand.

And to the person who thinks ALL Ron Paul supporters will support Rand, you are so very wrong. There are still many Ron Paul supporters who are furious that Rand endorsed Romney. Others think Ron had already discussed the matter with Rand...and that Rand had his father's blessing in endorsing Romney. In addition, there are others who don't care for some of Rand's ideas and consider them deal-breakers.

Now me, I support who I think would be the most likely to start turning this Country back around to following our Constitution. At this point, that's Rand. Is he perfect? Not by any means, but then again as much as I liked Ron Paul, I didn't agree with him 100%, either. However, if somebody better comes along, that's who will get my vote.

I agree, there's something off about him. Part of it is that "cat that swallowed the canary" smirk. It doesn't get any better when I look at the pic of Ryan either with that psychotic smile of a serial killer.

originally posted by: UnBreakable
a reply to: Annee

I agree, there's something off about him. Part of it is that "cat that swallowed the canary" smirk. It doesn't get any better when I look at the pic of Ryan either with that psychotic smile of a serial killer.

Oh good, I'm not the only one.

It is not normal for me to react to someone this way. To just feel creepy from their physical appearance.

Ron Paul to me is like a sheep in wolves clothing. He's degressive instead of progressive.

I know what the vomit from the elephants and donkeys looks like. So why not?