A pilot is still missing after a 104th Fighter Wing F-15C jet went down during a cross country mission. At approximately 9:05 a.m. LT on Aug. 27, radio contact with an F-15C was lost as the unarmed aircraft was flying over the Shenandoah Valley Virginia. According to the 104th FW Press Release, the pilot flying the Eagle aircraft reported an inflight emergency prior to radio contact being lost. The aircraft crashed in a remote, wooded area not far from the Virginia-West Virginia border. Even though the status of the pilot is still unknown, there are unverified reports by witnesses that saw an ejection and subsequent chute

UPDATE 11:45 AM: The pilot, a member of the 104th Fighter Wing of the Massachusetts Air National Guard, was flying a cross-country mission over the Shenandoah Valley in Virginia, according to a spokesperson from the Fighter Wing. The pilot reported an in-flight emergency before radio contact was lost at 9:05 this morning. The plane was en route to receive a systems upgrade, and wasn't carrying any weapons. The status of the pilot is still unconfirmed


Lets hope the pilot has ejected and is ok
Does anyone know if there a has been other F-15 crashes and if so what caused them? 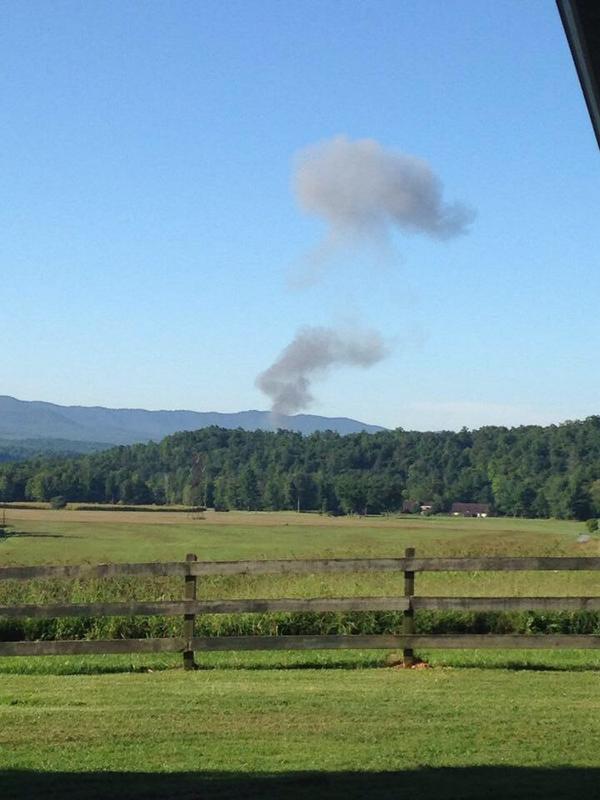 Twitter pic from Alana Austin
edit on 27-8-2014 by lambchop because: Aditional source

posted on Aug, 28 2014 @ 12:27 AM
link
This is not very far from my humble abode and what's odd is the fact that the night before this we had some low flying jets roll through here pretty late in the evening. They were so low, I thought my windows were going to shake right out of the house. I made a comment to my husband that there has been a ton of jet traffic coming through recently... A lot more than usual.

Although I love conspiracy theories, I am usually not one to question something like that and assume aliens or secret agendas right off the bat. And we do get the occasional fly through because it is Virginia. But it's been more traffic lately than I remember in my 37 years on this planet.

I wonder now if this was one I heard fly over and I would really like to know what happened to cause it to crash. What I wrote off as odd, now has my curiosity going nuts. Is there anything weird going on? Probably not, but your imagination sure likes to wander when something like this occurs.

I've been watching this all day. When they're missing this long it's not a good sign.

A few years ago a Missouri F-15 broke apart in flight when the longerons failed. It split in two just behind the cockpit.

The entire fleet was grounded, and it was found that a number of longerons were manufactured improperly. This resulted in quite a few aircraft being retired, and many more requiring extensive repairs to their longerons.

This is what happens when you force a machine to operate far longer than it was intended to.

While the air force refuses to disclose on the pilot's whereabouts, Virginia residents claimed to have witnessed a parachute near the crash site, which indicate that the pilot might have ejected. Keefe told the publication: "We do not have any information on that right now as far if anyone saw a chute, so I can't give any information about that right now." Meanwhile, search-and-rescue efforts continue by air and on land for the missing pilot

Zaph is it possible that the Longerons could of failed even after the upgrades?

Anyway of knowing how old the aircraft was that crashed? Are any of the new ones being produced put into USAF service?

Most modern ejection seats have a locator mechanism built in to them. " The pilot has not been found," is a euphemism for, the body has not been recovered yet. The pilot also carries an emergency radio in his survival vest so he's never out of communication for a protracted period of time.

I agree with your longeron theory!
edit on 28-8-2014 by buddah6 because: lobotomized through superior pain meds.

Something happened to go from an in flight emergency call to aircraft down with little to no warning. That means it happened fast. An in flight breakup could also possibly pop the seat without him pulling the handle.

Guard aircraft are between 74, and about 86 for the newest aircraft. The newest F-15s are the E models, which are about 86-91 or so. Average age for the fleet is pushing 30.

Read and be dismayed.

He was between 30 and 40,000 feet. If there's terrain up there, then pilots have a problem. It was a routine transit down to New Orleans for installation of a new radar at the depot. It wasn't a training flight.

thats a great thread Zaph and like you said very alarming and this was back in 2008,

Do you think they will ground the F-15's again and possibly indefinitely?

Do you know what the Air Forces process is after a crash? do they ground the the airframe immediately and do a an investigation until proven safe or do they only ground after an investigation advises too.

It'll depend on the SIB report. If it came apart in flight again, there will almost certainly be a grounding. They won't have a choice, because it means the longerons that were passed or repaired are failing. They'll have to come up with something.

originally posted by: Zaphod58
It was just announced the pilot didn't make it. Not unexpected with no word for this long.


Not surprising at all, I feel for their family.

My heart goes out for his family. I know how these things effect your family after watching several of these accidents play out when I was still on active duty. It's extremely sad.

My best guess is that the pilot was unable to eject because of a structural failure at altitude and at cruise speed. IIRC, the same thing happened in Missouri several years ago to another charlie model.

If it is the longerons again, and IMO it probably is, then the Eagles are screwed. They already have over 90% of the fleet at 90+% of their planned life cycle, with something like 5-7% at or over the life cycle limit. They already fixed the longeron problem once, and if they're failing while in level flight, with no stress on them, there's not going to be much they can do about that except remove aircraft from service that had damaged longerons from the last grounding.

It does sound ominous! The F15c that crashed in Missouri broke up in a turn and the pilot was lucky that the canopy came off in the ejection sequence.

Unfortunately, with the age of our planes getting older and remaining in service longer, I can see your argument for continuing projects like the F35s. It is the only logical solution to this problem.

He was in a repeated high G situation, doing ACM training, so the longerons were under a lot of stress. IIRC he was in an 8+ G turn at the time, and the way the aircraft broke in two, the cockpit came apart around him, activating the seat sensors before he could even start to react to the situation.

Whatever happened here hit hard, and hit too fast for him to do more than get the initial emergency call out. That, to me, says catastrophic structure failure. It's about the only way that they don't have time to eject at that altitude.