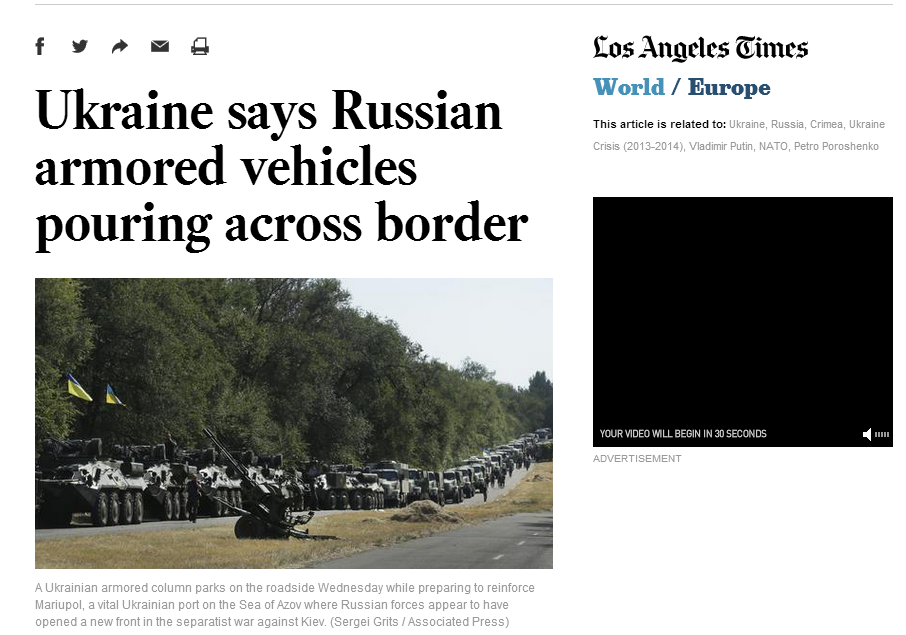 "Putin declined to take part in peace talks over the Ukraine crisis, repeating his claim that Russia wasn't involved. He said ending the bloodshed was “Ukraine's business.”"

When you have this technology.... 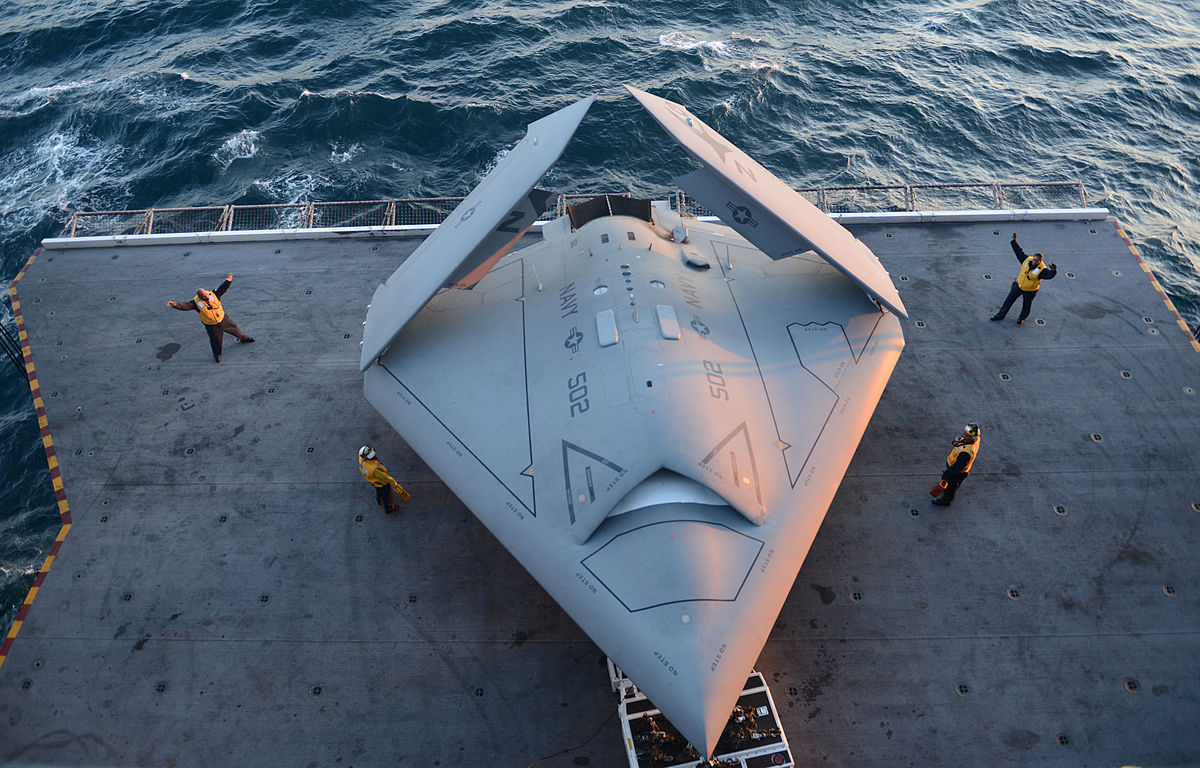 And you just let this happen... 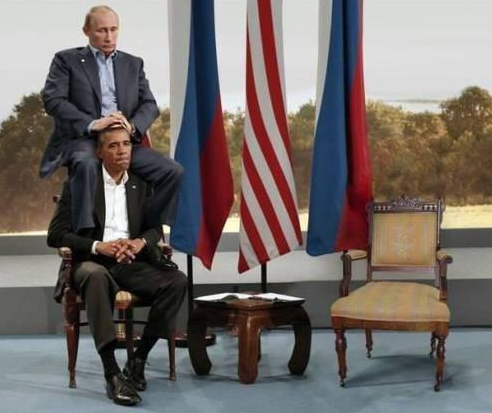 posted on Aug, 27 2014 @ 09:58 PM
link
Wheres the A10s?wheres the Davey Crockett missiles ?Wheres Obamas guts....?
Time to dance and hes playing golf....goes to show whos running things and it aint the president that's for sure....

posted on Aug, 27 2014 @ 10:08 PM
link
I first need more evidence to prove this credible, secondly this is not the US fight or nato its a European issue.

If its true the Europe better get their heads out of their a## and figure something out .

This is a common tactic. During the Gaza offensive there would be titles like "Hamas rockets strike Israel" and there would be a photo of smoke pouring from a skyline. A photo of an Israeli airstrike.

This is how the press conditions their audience. Subtle and very effective. And disgusting.
edit on 27-8-2014 by Logman because: (no reason given)

Not saying this couldn't be true. Frankly I hope it is, if only to shut that idiot up. Basically this simply smells like justification and prodding for NATO to expand onto Russia's border. Which was the plan all along anyway. If nothing else Poroshenko is a dutiful lapdog.

posted on Aug, 27 2014 @ 10:43 PM
link
Credible claims or not, the La Times presentation of the article is fully misleading. This especially to anyone who passes the page lightly,or cannot see the caption from afar.

Below it a big picture of a massive, menacing column of armored vehicles, in all appearance rolling forward.

And the small, grey caption telling us the picture depicts UKRAINIAN armor parked on the roadside.

It is Crap. So, regardless of the truth of this story, or the real scope of the subject alluded to (highly questionable, at that):

Yet another obviously contrived instance of media impressing their bias upon the public.

It is has been clear since the beginning of this crisis, that western media seeks to accuse and defame Russia.
I don't know why, but the agenda of the propaganda in the West clearly is: convince people that Russia is a dangerous, aggressive enemy whom is denying freedom.

And as I type that, I realize the MO has been played out countless times by the media for the West's Military Industry.

When America and the West wants to pick a fight, media is quick to paint the "enemy" as in on the front page of OP's article.

How could it have been the plan all along when no one saw Russia taking over crimea? Im not talking TPTB it just happened....

And yeah i think Ukraine is making alot of noise to try and get some allies involved but i also think Putin is testing his every single angle on if Europe grew a set of balls to do something about it. He knows the EU is #

posted on Aug, 27 2014 @ 11:00 PM
link
The photo has nothing to do with the claim. Ukraine did not supply that photo and say it was Russians, the journalists did it. To link the 2 together is a logical fallacy.

Did you read the caption yourself or just a knee jerk reaction? It's cool if you don't want to be honest, I ain't here you to judge you anymore than we already have.

This was the plan from way back. Ater the breakup of the Soviet Union Gorbachev asked to join NATO and was flat out refused. When NATO swore it would not expand any farther east but then has continued it relentless expansion into the Baltic States and other countries of the Warsaw Pact. Now they are looking for the last excuse to move up to Russia's borders. I suspect that's all NATO will talk about at their big meeting in Wales coming up.

Crimea was an after effect of the west's toppling the previous (democratically elected) president before the rule of Poroshenko (who is a total western puppet.) Crimea was strategic to Russia and after the west toppled president Yanukovych and drove him out of Ukraine Crimea said they wished to rejoin Russia and Putin let it happen.

I believe this meeting in Wales will be a surprise to the US as the EU is already suffering under the US mandated sanctions. My guess, the EU will tell the US and NATO to take a hike and try to recover from some of the losses that have already been inflicted on them. Just a hunch considering Angela Merkel's statements today.


By treaty the only thing we are bound to do for Ukraine is call a meeting of the Security Council if Ukraine is attacked or threatened with nuclear weapons. When Ukraine gave up its nukes it was best buddies with Russia and did not ask for any military guantees and when both Bush Sr and Clinton explored that option Congress refused any treaty that had any militay aspect to it. So we ended up with a treaty that pretty much requires people to talk if nuclear weapons come into play.

As for the OP I think it is pretty clear at this point Russia has been directly involved for some time now. The captured paras, the secret burials at home, families looking for missing service members etc. The Russian lie of not be involved is now being revealed to the only people who believed it in the first place, the Russians. And they seem none to happy about it.

The problem for Putin is that morale in the Russians forces seems very low even among elite units and none of these poor guys seem to know the are even going into combat until they start getting shot at. Russia vs Ukraine is more like a WW2 style conflict of attrition with both sides using out dated tactics, older equipment, poorly supplied forces and not the most motivated soldiers either. If Russian forces ever face a modern professional western army they are going to be in for a shock.
edit on 27-8-2014 by MrSpad because: (no reason given)

originally posted by: stirling
Wheres the A10s?wheres the Davey Crockett missiles ?Wheres Obamas guts....?
Time to dance and hes playing golf....goes to show whos running things and it aint the president that's for sure....

Dance, you wanna dance? Please do ... it would be a real joy, to see you get your ass whoopped.

First of all, if Russia was going in ... it would be with the Russian bear flying over Europe. And the US ... wanna shoot down a multi headed nuclear arsenal, right over New York ... go ahead. Make my day, punk ... you wanna fight a nuclear holocust, where you will be exterminated ... sure, go ahead make my day punk.

Russia could have ended this bloodshed, before it happened ...

Russia isn't going to do much about Ukraine, but there are forces in Russia that certainly are "pissed" at Putin. Putin stole the election, and stole the presidency ... because Medvedev was defying NATO. Medvedev was threatening a war with NATO, and Putin stole the chair, to make sure Russia would stand down in an eventual Ukraine Crisis.

Putin isn't your enemy, he's your ally in disguise. He represents, the Ogliarchy, the criminal entities of the old Soviet Union ... one of the five arms, of the pentagon.

It's hilarious how impotent and weak the Russian military is that all you ever talk about is nuclear strikes, because you know the US would smack Russia around with 2 hands tied behind it's back, and the Bear is more like a Mouse.
edit on 28-8-2014 by OccamsRazor04 because: (no reason given)

Sorry my screenshot skills are not up to your standards.

All I'm doing with this thread is passing along a story from a fairly credible source.

Quite a bit has been going on in Ukraine the past few days and I haven't seen squat on ATS.
*NATO reports military incursions from Russia into southern Ukraine
*Reported Russian artillery fire into Sea of Azov coastal towns opens new front for separatists in Ukraine
*Kiev military official claims more than 200 separatists killed in escalating battles in southern Ukraine

And I remember just a couple days ago Germany was in PEACE talks with everybody. Guess not.

One word in the Headline grabbed my attention and they played off that word with the picture.

posted on Aug, 28 2014 @ 05:56 AM
link
For those full of criticism for Obama because he's not dropping ''Davey Crockett s'' boy am I glad someone of your low IQ is not in any position of power.

I thought your ignorant war mongering ways went out the door when Kennedy stared you down during the Cuban Missile Crisis.

Ukraine and Russia need to sort this out themselves. Any US involvement would not have a winner.
There will be no

'' USA USA USA '' chanting with your handguns drawn and fat guts hanging out of your NFL Shirts while guzzling Budd walking through NYC. It would be epic and disastrous. This is precisely the thing Obama is trying to avoid.

I doubt your fat ignorant self would be able to make the draft requirements, so I can see why you dont care. But this is a beautiful world and we need to do what ever we have to do to keep it living.

"The U.S. government accused Russia of orchestrating a new military campaign in Ukraine that is helping rebel forces expand their fight and sending in tanks, rocket launchers and armored vehicles."