posted on Aug, 27 2014 @ 07:21 PM
link
Reading all the big media headlines (and some of Donald Trump's tweets) on the Ebola outbreak, you'd think we should be gearing up for a viral apocalypse at home here in the U.S. Today I invite The Global Dispatch's Robert Herriman, a licensed microbiologist, to discuss the outbreak currently sweeping through parts of West Africa and to clear-up some common misconceptions about the disease -- including the myth that YOU are at risk here in America. Check out the full episode below and let me know if you agree or disagree?

posted on Aug, 27 2014 @ 07:34 PM
link
a reply to: JesseVentura
Jesse if this gets out into India,The Phillipines,China, or any other primitively equipped high population density country then millions will die....scared? Not so much here in the land of the big PX,but worried it will be further excuse to clamp more restrictions on the constitution....

posted on Aug, 27 2014 @ 07:34 PM
link
a reply to: JesseVentura
Jesse if this gets out into India,The Phillipines,China, or any other primitively equipped high population density country then millions will die....scared? Not so much here in the land of the big PX,but worried it will be further excuse to clamp more restrictions on the constitution....

Only a matter of time whether it's Ebola or not. 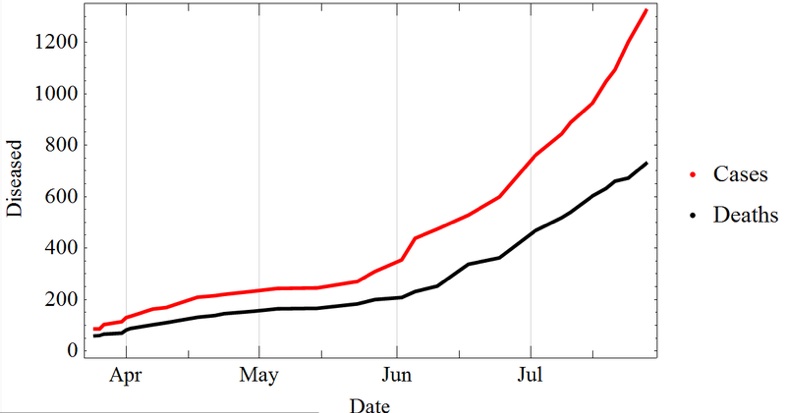 Degree in biology and I agree with Herriman. Also would point out that fruit bat is actually something that people in W. Africa eat so that is yet another source of infection. We don't eat fruit bat here in the states. At least I don't think we do...

Stirling, airborne transmitted infectious disease are usually the ones that kick off epidemics and pandemics. Not so much contact. Bubonic plague (Black Death) is transmitted through flea bites, contact and through coughing (airborne). The Spanish Flu is thought to have been a particularly virulent form of H1N1, which also has airborne transmission.

SARS had a contact transmission that is kind of similar to Ebola. Sounds scary til you compare the two in terms of symptoms. SARS was sneaky because it started out with a fever and some mild respiratory problems. Ebola has a sudden onset of flu like symptoms. Still kind of sneaky but in about 50% of the cases of Ebola, you've got really messed up phenomena occurring like big blood blisters, super reddened eyes and well, vomiting blood. SARS is like a really bad cold that owns you in the end. Ebola is pretty freaking apparent after its sneaky stage in half the cases.

So with SARS as a comparison being the sneakier of the two, we had 64 to 71 cases of SARS out of a population of around 300 million in the US and it didn't go full blown pandemic. China, on the other hand, had up to 5k out of a 1.2 billion population. And SARS is contact transmission like Ebola but sneakier than Ebola.

"Captain Trips" was much worse...

Thank you, Mr. King, for the nightmares

posted on Aug, 27 2014 @ 08:59 PM
link
Dont forget the Suicide Ebola bombers! ridiculous as it sounds, this potentially could be a plentiful and economic source of Bioweaponry of sorts.

SEB's for short, i hope they have a plan for that unlikely event!

No panic here, big guy. Simply spit on your hands before you handle money, punch out a rude person, or open anything from China. That way you're protected.

See? I read ATS all the time.

The world is changing ecologically and biologically more then likely due to human intervention, even though we may not have a scientific theory or method (not only to prove that there are things we don't know, no science method or theory to show what we don't know btw) to show that maybe our planet is fighting back against us life is a struggle for survival those things that ebola may have effected before may have become less appealing in shadow of us. Maybe nature is fighting back, it may be stark by saying so but also fighting fairly. Or I could just be not making any sense either way Jesse thanks for your service!

I just hope everyone is right and it fades off and is under control as soon as possible.
No matter what it is a good reminder that something worse could come along.

Thanks for trying to help put a lid on the fear.
If we had the same medical system as western Africa I would be a lot more worried.

posted on Aug, 28 2014 @ 01:22 AM
link
If this is so hard to catch, why does working with it require Level IV Biocontainment precautions?

And after working for 30+ years in large hospitals, I can tell you without any shadow of a doubt that three days in on any true epidemic this lethal, there would no longer be anything approximating 'western medicine'.

Your basic supplies would run out (we're already experiencing a dearth of IV sterile saline, the only purported real 'treatment' for Ebola patients) including sterile gowns, gloves, and most certainly, adequate infection control isolation rooms.

How many people come to a regular hospital ER right now every day? Fifty, One Hundred? Multiply that by a factor of say, 3, because of fear and a mild panic and you've already overwhelmed a 'big city hospital' with 200 beds. Okay, so you put people in the hallways for observation, and then you set up tents in the yard. It won't be long before it looks like that scene out of 'Gone with the Wind' with bodies as far as the eye can see.

How will hospitals know if a person presenting with fever and muscle aches has a normal flu or Ebola? They can't, and they will be put in a normal room under normal precautions because the extra precautions required for Ebola are onerous, complicated and expensive, and you've got two, count'em, TWO rooms set up with negative pressure systems. Once word gets out that it's Ebola (as the patients crash to the floor bleeding out of every orifice mere hours after they were considered just another fever case), you'll have a hard time staffing the hospital any more with medical professionals, much less food service, clerks and cleaners. A hospital is a specialized little city and it requires 24/7 complicated staffing, most of which is not particularly medically trained, but all are critical to the functioning of the place.

Fast forward three days and you won't have any hospitals left at all. Not even the most altruistic medical staff are going to take care of Ebola patients without Biocontainment level IV precautions, and they'll be in increasingly short supply.

The CDC should have shut down international and local plane travel three weeks ago, at the very least. This could easily become the Four Horses of the Apocalypse, already out of the barn.

The people who worry about these things were waking up in cold sweats worrying about the sooner or later inevitability of another global pandemic, but they thought it would be H5N1 or a new outbreak of the Spanish flu. That it could be Ebola wasn't even in anyone's worst nightmares, it was so unthinkable.

Sorry Jesse but I think your expert is going on his belief that this is hard to spread, or that only someone visibly ill is contagious (that's a first for all infectious diseases that I can think of...) or that a cough or sneeze that contains millions of molecules of mucous, which would/could contain trillions of particles of virus, is somehow a safe thing to be close to unprotected... meanwhile the health professionals in Africa that caught Ebola apparently did so because, even with all their training, they were suiting up in the same room as less-carefully prepared and contaminated staffers, thus causing a break in the chain of protection. There is no reason to think that the same breaks in protocol wouldn't happen in the vaunted 'western medicine' locations. People make mistakes, especially exhausted people after a very long shift, with no end, no relief, in sight.

In short, this interview is pure hubris, and we can now see what hubris wrought with regards to nuclear power and the reassurances that it was safe and there would never be a meltdown, that that was ridiculous and impossible...because likewise, some people thought it was unthinkable or maybe in reality didn't want to think about it.
edit on 432318amThursdayf23Thu, 28 Aug 2014 01:23:43 -0500America/Chicago by signalfire because: (no reason given)

Everything you wrote, and I thank you for the detailed post, is every scenario I've been fearing. You're so right, yet I hope you're so wrong.

posted on Aug, 28 2014 @ 08:40 AM
link
Thanks for the interview. Figured this would be relevant to the discussion here as well because of posting it in a breaking thread on Ebola numbers- "WHO Warns Ebola Outbreak Could Hit 20,000 Within Nine Months".

Looks like, even if they had more money than they needed to help and they weren't greedy in their proposed goal of stopping the spread it may not work. People were already up in arms declaring in Liberia that they will still eat bush meat because it's not the cause of Ebola and that their government wanted to tax it. Now finally, after all the infections, reports are saying people are in fear of bush meat in other areas. It's a start there, but there are other things, especially the fact of hygiene to proper disposal of the affected bodies in such impoverished areas. It's going to be hard to change some factors unfortunately.

I hope all the warnings are wrong by the CDC and now the The World Health Organization. At this point let it all be sensationalism, a ruse, what ever one might say. The reality of the situation is very frightening.

posted on Aug, 28 2014 @ 09:32 AM
link
I wonder if anyone has tried colloidal silver or gold as a treatment for this. They're touted in the fringe/holistic cure world as having healing powers beyond that of ordinary pharmaceuticals. Allegedly effective in cases where western medicing offers no help.

Greetings, My opinion is:

If there was one rife machine available when this epidemic broke out it would have nipped it in the bud.

The refusal to use this proven technology is criminal at the least.

For those of you who would like to have this technology but can't afford it, go to spooky2.com

You can down load an advanced rife technology program for FREE.

The site will direct you to a source for signal generator and other advanced devices for a VERY LOW COST advanced rife machine. Less than $200. for basic. About $325 for very advance set up.

You don't have to live in fear of some dreaded disease because the government and big pharm want to enslave you and bleed you to death financially. You can diagnose yourself with this technology for most conditions.

I have been using this technology for about 8 yrs now and it has made a BIG DIFFERENCE in my life.

It can do the same for you.

I do not think it is time to panic over the recent Ebola outbreak, yet. All throughout history there have been horrible virus outbreaks, not to mention bacterial and fungal. This is a story that is repeated throughout time, over and over. My main concern is that Ebola could mutate as it is introduced into the major populace. If, and when, the virus mutates will it become more deadly, or weaker?

At one time in history humanity was spread so thin that major viral outbreaks were, for the most part, contained to that particular section of the population. But as we begin to rub shoulders with each other on a much more grand scale, viral outbreaks can spread like wild-fire.

Oh well, that's my two cents. For what it is worth to you.