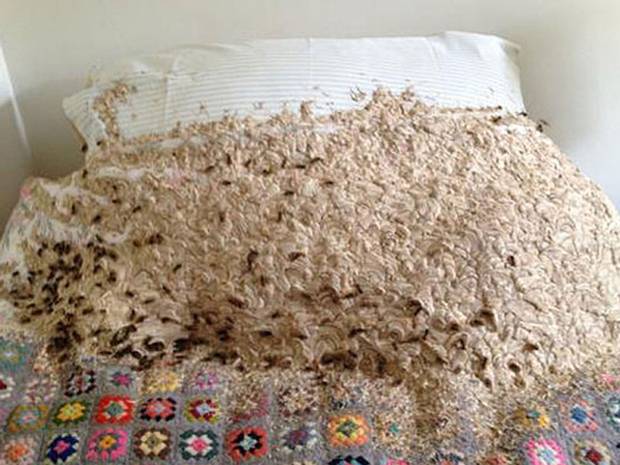 Pest controller John Birkett described it as the most unusual job of his 45-year career , the nest with an estimated 5,000 Waspy inhabitants measured (3ft) wide, and 30cm (1ft) deep , to add to his problems the householder wanted him to rescue a knitted quilt of sentimental value the wasps had built their home over.
It's believed the Wasps entered the house through a small window that had been left open in a box room of the 5-bedroom home in Winchester, Hampshire and built the nest over a period of a few months.


He said he “couldn’t believe it” when he saw the nest, and that his client was “terrified.”
“I had to think how to deal with this, and I couldn’t leave the door open very much or the wasps would escape into the rest of the house.”
Dressed in protective clothing and armed with insect spray, he was able to control the hive within an hour. He then broke the nest up into pieces, to discover that the bugs had chewed through the mattress and the bed pillars, before helping the owner clean up her home.
www.independent.co.uk...

It's the stuff nightmares are made of

I'd take wasps over bedbugs any day. May not be the brightest choice but bedbugs......

At least bed bugs can't sting you to death , all the ask for is a little blood meal

posted on Aug, 27 2014 @ 01:52 PM
link
Take it outside and burn it. You don't want to save a quilt with chemical all over it from the spraying they'll have to do. Plus it's cheaper to burn it yourself rather than paying pest control to handle it. P.S. I worked in the Pest Control field in Washington D.C for years.
edit on 8/27/2014 by RyanDaniel because: (no reason given)

originally posted by: Iamthatbish
They ate the mattress?! I got chills reading that!


And when they'd finished the mattress.....

originally posted by: Yeahkeepwatchingme
Yikes. Was it a weekend home where there wasn't much activity? Still amazing and frightening all at once. S + F

Apparently not. The bedroom, itself, was a spare bedroom that was "rarely used". My guess is that rarely used also means rarely swept, vacuumed, or dusted. If the wasps wouldn't have been there to greet the son, the dust bunnies would have gotten him!


Plus it's cheaper to burn it yourself 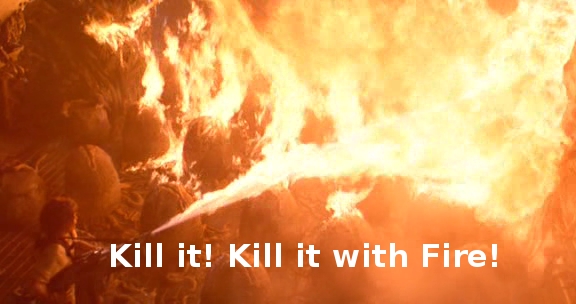 posted on Aug, 27 2014 @ 02:59 PM
link
The following is my opinion as a member participating in this discussion.
The article says that it took the wasps months to make that nest. That means that no one went into that room for months. No cleaning. And they didn't hear the buzzing? Really? That's kinda ... well ... a dirty house. yuk

posted on Aug, 27 2014 @ 03:04 PM
link
I can see the sense of it. If you are an elderly or older person, you shut off the room you aren't using and only open and clean it when you are expecting guests. Then you clean it thoroughly after they leave and close it off again. It lowers your burden of housework as you age and helps control your bills.


But yeah, that would have scared the bejesus out of me, to walk in and see that. And while I would have been heartbroken to lose an heirloom, to be rid of that nightmare would be worth it.

posted on Aug, 27 2014 @ 03:11 PM
link
a reply to: ketsuko
Yeah, my grandmother use to do that. She would shut up the whole upstairs, and then clean it before we came for the summer.
Saved on heating and electrical too.

I have a wasp nest inside the wall of my deck. I've used two cans of wasp killer and they are still around despite the bodies covering the ground. I 'm beginning to think that it is steroids for the survivors.

Can't wait for late fall so that I can spray the cracks one last time and caulk them in.

posted on Aug, 27 2014 @ 07:52 PM
link
One day I came home from work and my wife complained that the TV was making a buzzing sound. I checked out the TV, all the wiring and the cable connection. I fiddled with the knobs, tightened the cables and tried changing channels and audio settings. Nothing seemed to work to stop the buzzing sound. Finally I turned off the TV and the cable box entirely.

To my surprise the buzzing sound continued. Pressing my ear to the wall behind the television (which was an outside wall), I could clearly hear what must have been the wings of thousands of insects. Outside, I discovered a tiny hole in the exterior wall had become a wasp super-highway with the comings and goings of dozens of insects at a time.

A quick call to the exterminator put an end to it.

I still shudder to think what would have happened if we had made even the smallest hole in that wall on the inside, like pounding in a nail to hang a picture or drilling a screw mount for a shelf. The yellow and black devils might have poured out through the opening in a swarm, none too pleased to find their home had been invaded by humans. Yikes!

That is just not something I would want to have in my house, I can tell you that for sure. I think I would rather commit ritual suicide with a blunted, rusty bread knife in the Japanese fashion, without the relief of a pal to lop off my screaming head.