Evidence We are Inside A Supernova Remnant.

posted on Aug, 26 2014 @ 11:37 AM
link
A new video put out by NASA says we are probably situated within a Supernova remnant or multiple supernova remnants. Astronomers that were looking for interstellar gas in the immediate vicinity of the earth didn't find much at all. The local bubble as it is called is composed of 0.001 atoms per cm^3 compared to other regions of interstellar medium which can reach densities of 10^6 atoms per cm^3. Also ever sense the 70's scientist have detected X rays coming from all directions. There where two theories of where these X-rays where coming from. Hot gas heated to millions of degrees by exploding stars would produce these x-rays but also other scientist believed it came from charge exchange from the interaction of the solar wind and the interplanetary medium. Electrons that jump from one atom to another would produce such x-rays. But a sounding rocket test in 2012 which measured the amount of the charge exchange x-rays showed that only about 40% of the soft x-rays originate from within the solar system. They concluded that the the rest of the x-rays must be coming from a local bubble of hot gas, the remnants of ancient supernova.


originally posted by: rickymouse
A new theory. Hope it replaces the big bang theory. I know, now it will change to the Gang bang theory

You aren't alone. I think the show was created to associate the big bang theory with something stupid.

I don't think this is referring to the creation of the universe. The local bubble that is being described is only about 300 light years across. The universe being 10's of billions. They are just saying that the space in which the solar system resided is a supernova remnant.

OHHH you where speaking of the show. Sorry my mistake. I never seem to be able to identify sarcasm in post and it leads me to awkward over explanations all the time.
edit on 26-8-2014 by BGTM90 because: (no reason given)

posted on Aug, 26 2014 @ 12:36 PM
link
The general idea is that after the Big Bang, there have been several generations of short-lived super massive stars that went supernova. Each time they converted some of the original hydrogen (electrons and protons) into other elements; Lithium, Oxygen, Carbon, Iron. It's only when a supernova is in full steam that the heavy elements like uranium were formed.

The core of the Earth is formed from Iron, Carbon, with the mantle composed of Lithium mixed in with water. It's only on the surface layers of our planet that the heavy elements are found. Looking at the size of all the planets and the Sun in our solar system, all the rocky bits just form a tiny part of the total volume. So they are like drops of water that form when hydrogen burns with oxygen.

Yes but these stars went super nova 10's of millions of years ago, meaning while the earth was already formed and life on earth was already started. Can you imagine looking up at the night sky and essentially seeing another sun? It would have been incredible.

a quote form the video.


It seems obvious you don't want a supernova exploding near earth, yet there is growing evidance suggest that one did. Actually more than one. About 10 million years ago a nearby cluster of supernova when off like popcorn.

All of the elements heavier than iron that we have in our solar system (including the iron and heavier elements inside your body) were formed by a supernova explosion (or explosions) of stars that happened before our solar system formed.

I realize that this article is saying something slightly different (i.e., that we may be living among the remnants of a supernova), but considering we know that much of the materials that make up our solar system (and our bodies) were once inside a star that went supernova, it isn't surprising.


By the way, the carbon in our bodies and the nitrogen and oxygen we breathe (any elements heavier than hydrogen, helium, and lithium) were also formed inside of a star that died long ago -- although not necessarily in a supernova. These elements could have been sent into space by a star that went nova, rather than supernova.

As Carl Sagan once said: "We are made of star-stuff".
...And he meant that literally.

It would technically still be a big bang ...

And scientists have known that our entire galaxy was most likely created from a massive supernova, in the center for example is billions of stars all fighting with one another gravity, eventually it'll all become one again and probably explode again.
This is where the theory of the miltiverse comes in, our entire universe is nothing more than just one of many, which is why we created the Hardron collider to figure out the higgs particle.
edit on 26-8-2014 by strongfp because: (no reason given)

I know this but what is being stated is these stars went supernova only 10 million years ago, and had nothing to do with the formation of the solar system or earth. Although there are probably elements created from these supernova on earth, but they where introduced far after its formation. Maybe this is where the heavier elements that are not in the mantel originate from. It would be possible to find out if you did isotopic analysis of of elements with isotopes that have half lives of about 1,000,000 years and see if there is any large quantities present in the samples. Or find isotopes that have half-lives shorter than 1,000,000 years and see if there is any in the samples.

posted on Aug, 26 2014 @ 06:57 PM
link
I have heard of the Local Bubble before, so it's nice to see evidence about its origin. It's also remarkable to learn about these relatively recent supernovae (which occured after the Solar System and the Earth were formed), affecting our stellar environment so.

I often wonder what our stellar region would look like from a few hundreds of light years away. Would an alien astronomer see us inside a nebula, a large supernova remnant, or indeed being in a void of emptiness?

It would depend on what wave lengths they were looking with.

Correct. If they look at wavelengths where the material either reflects or absorbs that wavelength they'd see a structure.
edit on 27-8-2014 by JadeStar because: (no reason given)

It moves throughout the Milky Way galaxy over time. It revolves around the center once every 200-250 million years and it is 4.5 billion years old. So the fact that we're in this remnant now means little since 10 million years ago both we, and it were in different positions entirely. 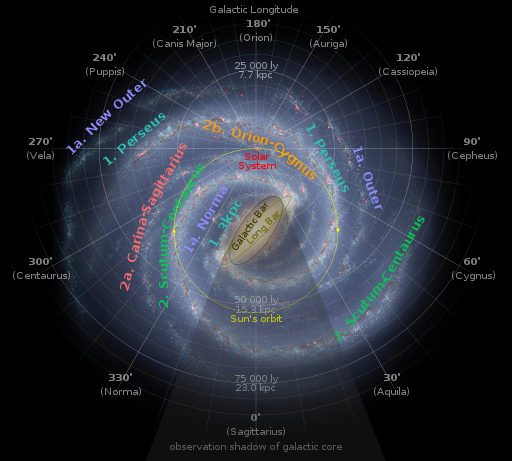 All the other stars are doing similar things with different orbits and these can change over time as well due to gravitational interactions.

Correct. Error on my part to leave out emission. The bubble in question has gasses which are around a million degrees which is how it was detected.
edit on 27-8-2014 by JadeStar because: (no reason given)

yes but the super nova happened only 10 million years ago and sense speed is relative and those stars where also moving around the galaxy at approximately the same speed sense they where approximately the same distance ~ 300 light years from earth. Would the remnants also not be moving with us? I'm sure the relative speed was not zero but it probably wasn't the 20 km/sec. that we are going around the galaxy. My point being that the supernova where probably relatively close to the earth. And it would have been a tremendous sight in the sky.