posted on Aug, 26 2014 @ 05:22 AM
link
The 3-million-year old skull of the Taung Child considered the premiere evidence that Australopithecus africanus was distinctively human has been shown to be not too human after all.

Ralph L. Holloway with the Department of Anthropology at Columbia University in New York and colleagues have produced convincing evidence that the Taung Child skull does not show human-like development that has been claimed for the last 90 years. The research was published in the Aug. 25, 2014, edition of the journal Proceedings of the National Academy of Sciences

Link to the published research here 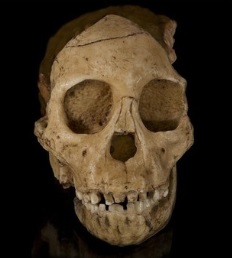 The Taung Child lived about 3 million years ago, and was roughly three to four years old when it died. Evidence from the fossil skull indicates that Taung Child fell prey to an eagle.

The skull which was uncovered in South Africa has no signs of the kind of soft spot that would be seen in human children with larger brains, it didn't experience a spurt in brain growth in its first few months, as modern babies do, making it less human-like than previously thought.

posted on Aug, 26 2014 @ 05:54 AM
link
This is much larger than it seem's as it throw's yet another spanner in the human evolutionary line that is tought in school's as factual, very interesting thank you for posting this. fell prey to an eagle

it's like the first/only evidence of predatory birds grabbing a "human" child.

NZ had an eagle big enough to kill adults and often attacked.

but that was more recent than 3 mil yrs.

I had no idea eagles were so feirce.

they are awesome birds.

i lived in WY and saw them all the time.

i drove a mazda coupe sporty thing, small car and a juvi bald was feeding on some road kill on the side of the road.

he rose up when i was passing and i swear it's wing span was as big as my car! lol!

S&F for the memories!

No, it doesn't "throw a spanner in the human evolutionary line". I know you're really scraping the barrel to try and reconcile your creationist beliefs with reality but this neither "disproves" human evolution or evolution in general. It's an exciting new avenue to explore and, as usual, creationists are attempting to use this exciting new discovery to discredit evolution. Unfortunately, science doesn't work that way: science correcting itself over the little details does not lend any more credibility to your fantasy of creationism.

originally posted by: LABTECH767
This is much larger than it seem's as it throw's yet another spanner in the human evolutionary line that is tought in school's as factual, very interesting thank you for posting this.

How so? If you really believe that then you haven't done a lot of research into the various Australopithecines. Their "humanness" or connection to humanity was their bipedalism, not their brain capacity. This just gives a clearer picture of Australopithecines development compared the the various members of the genus Homo. They're a seperate and older genus than the one which we are directly descended from. That Australopithecines had small brains much like chimpanzees has never been in doubt.

originally posted by: LABTECH767
This is much larger than it seem's as it throw's yet another spanner in the human evolutionary line that is tought in school's as factual, very interesting thank you for posting this.

And how pray tell does it do that? What do you understand about Australopithecus africanus in respect to human evolution that this would cause people to doubt the legitimacy of evolution? Please enlighten us. Or are you just saying things that sound good from a creationist standpoint?

Eagles have been around for over 30 million years. As far as the age of the skull, it could be anywhere from 2 Million to 3 million years old. It's definitely an adolescent A. Africanus and that is the time frame that version of Australopithecines existed.

posted on Aug, 27 2014 @ 04:53 PM
link
a reply to: peter vlar the age is not fact. you know this. it is an educated guess by some with inflated egos. Sure there is a concenus that the dating is correct but it is not fact.

He never said that it was fact,do I detect another creationist ?

Hence my statement that it is between 2&3 million years old. This particular skull is very difficult to say with any certainty because it was find in a limestone mining operation and additional mining continued after the skull was removed rendering geologic analysis impossible. You can dispute the dating all you want but until you can show me that inadequacies involved in geologic dating techniques you're on your own because in the last decade dating techniques have improved to the point where, in one example, a more recent member of the Australopithecine family, A. Sediba, has been dated to just under 2 million years old with a margin of error of +/- 2000 years which is pretty precise when considering the age of the samples involved.

The first step, and the step that Dr Pickering was most intimately involved in, was uranium-lead dating of the limestone deposits, or flowstones, which lay above and below the Au. sediba fossils. Uranium-lead dating is similar to carbon-14 dating, in that it measures the gradual decay of a chemical element’s radioactive variants, or isotopes, over time. In the case of radiocarbon dating, carbon-14 (14C) that is trapped into a biological material upon death decays over time, and predictions can therefore be made about when an organism lived according to the amount of carbon-14 remaining in the sample. In uranium-lead dating, the principal is the same: uranium-238 trapped in rocks during their formation decays to lead-206 (and uranium-235 to lead-207), and measuring these isotopes gives us an idea of the age of the rocks. Unlike carbon-14 dating, which measures ages in the tens of thousands of years, uranium-lead dating measures in the millions to billions of years. In fact, uranium-lead dating was responsible for providing us with one of the first accurate measures of the age of the Earth at over 4.5 billion years.

Isn't it a fun game when we explain the data, give specific examples and then cite our sources but all those with a YEC agenda just have to make a blanket statement built upon a strawman for it to be true in their minds? The education system in America really has been dumped into the outhouse when people can't refute anything with actual facts yet can't see the smoke rising as the strawman burns to ash before their very eyes.

posted on Aug, 27 2014 @ 06:18 PM
link
a reply to: peter vlar Just because i do not know what i am talking about and i am on my own in the belief that dating methods are not even close does not mean that the dates are right. For all we know some time traveler could have planted it there just to have something to talk about. No amount of proof will ever be definitive for me because i was not there and can think of ways to replicate what you consider to be truth or fact.

posted on Aug, 27 2014 @ 06:26 PM
link
This is nothing about evolution, just that the evidence they were using was not what it was supposed to be. People evolve, but I think Humans and Monkeys evolved from the same being, and this being was more humanoid than it was monkeys. It may have split again and apes were formed from the humanoid. Diet and environment over a long time could have caused a Humanoid to turn to an ape if the environment necessitated it.

Humans are an offshoot of another hominoid who's body we have not found yet. We may have evolved from a combination of any hominoid also. A mutation of some sort long ago.

I don't believe in the theory of evolution, but I do believe in evolution. I also believe some structured energy frequency is the reason everything looks as it does. When some person says this is what happened and everything went this way, I know not to believe in the theory. It is a creation of pride that is being toted as reality, when in fact we may never know what happened. A few hundred bones from various beings that we have found is nothing we can create a solid fact off of. The theory of evolution is just a theory, it is not a fact, yet it is being pushed as fact by many people. If science begins using beliefs of people to back it's theories, then it isn't science anymore. If enough people believe something, it becomes reality, that is what science wants. It will become another religion.

The new information on this skull does nothing either way.

originally posted by: deadeyedick
a reply to: peter vlar Just because i do not know what i am talking about

You could have stopped right there. That was the most important portion of what you wrote. You can't start off admiring you don't have the foggiest idea of what's going on and then still try to deny the evidence sitting in front if your face. That's some next level rationalizing right there.