posted on Aug, 26 2014 @ 04:29 AM
link
A strange phenomenon occurred over the Pacific ocean somewhere South of the Russian peninsula Kamchatka.

Here is the pilot statement:

Last night I experienced the creepiest thing so far in my flying career.

After about 5 hours in flight we left Japan long time behind us and were cruising at a comfortable 34.000ft with about 4,5 hours to go towards Alaska.

We heard via the radio about earthquakes in Iceland, Chile and San Francisco, and since there were a few volcano’s on our route that might or might not be going off during our flight, we double checked with dispatch if there was any new activity on our route after we departed from Hong kong. 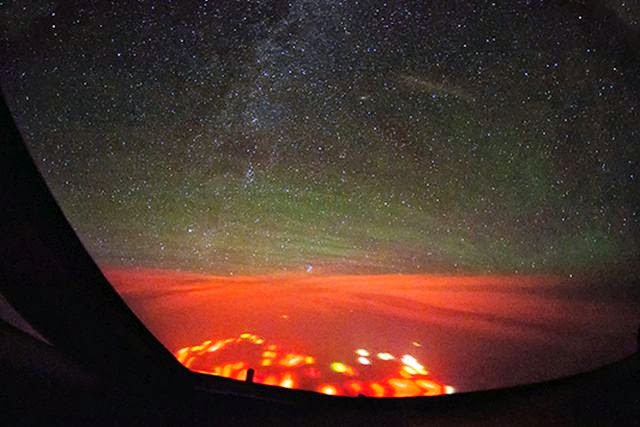 More from the pilots statement:


Then, very far in the distance ahead of us, just over the horizon an intense light flash shot up from the ground. It looked like a lightning bolt, but way more intense and directed vertically up in the air. I have never seen anything like this, and there were no flashes before or after this single explosion of light.

Since there were no thunderstorms on our route or weather-radar, we kept a close lookout for possible storms that might be hiding from our radar and might cause some problems later on.

I decided to try and take some pictures of the night sky and the strange green glow that was all over the Northern Hemisphere. I think it was sort of a Northern Lights but it was much more dispersed, never seen anything like this before either.

About 20 minutes later in flight I noticed a deep red/orange glow appearing ahead of us, and this was a bit strange since there was supposed to be nothing but endless ocean below us for hundreds of miles around us. A distant city or group of typical Asian squid-fishing-boats would not make sense in this area, apart from the fact that the lights we saw were much larger in size and glowed red/orange, instead of the normal yellow and white that cities or ships would produce.

The closer we got, the more intense the glow became, illuminating the clouds and sky below us in a scary orange glow. In a part of the world where there was supposed to be nothing but water.

The only cause of this red glow that we could think of, was the explosion of a huge volcano just underneath the surface of the ocean, about 30 minutes before we overflew that exact position.

Since the nearest possible airport was at least 2 hours flying away, and the idea of flying into a highly dangerous and invisible ash-plume in the middle of the night over the vast Pacific Ocean we felt not exactly happy. Fortunately we did not encounter anything like this, but together with the very creepy unexplainable deep red/orange glow from the ocean's surface, we felt everything but comfortable. There was also no other traffic near our position or on the same routing to confirm anything of what we saw or confirm any type of ash clouds encountered.

We reported our observations to Air Traffic Control and an investigation into what happened in this remote region of the ocean is now started.

This looked like a frightening experience for the guy, flying basically into a unknown phenomenon to him.

Can ATS Members figure this one out?

Cheers for pointing that out, I never use the home page.


Mods do your thing

posted on Aug, 26 2014 @ 04:53 AM
link
Here's the link for future visitors that want to discuss this topic. Unknown orange/red glow over Pacific