Presentation doesn't matter. Facts do. The link between autism and MMR vaccines was proven not to exist.

originally posted by: charles1952
a reply to: Murgatroid

You know I have respect for you, and it is out of respect that I make the following suggestion. Why don't you say that the recent four sources provided may include some really questionable people, and I'll forget you posted them and go back to your original four? OK?

(I'm saying that, because you might not know that one of them is an astonishingly poor advocate for anything at all. and the rest are at best, questionable.)

I would say that anyone who is for pumping little kids full of poisons (like lab rats) so that Big Pharma can line their pockets is a little questionable...IMO!

Vaccination before 36 months was more common among case children than control children, especially among children 3 to 5 years of age, likely reflecting immunization requirements for enrollment in early intervention programs.

posted on Aug, 26 2014 @ 09:37 AM
link
A friend of mine's son received the MMR jag and developed serious bowel problems. Apparently he had no problems whatsoever before the vaccine. They are absolutely convinced this was the cause of the problem.

Vaccinations are a scam! There have been measles outbreaks with 90-95% of the people who got measles were already vaccinated for it.link, link

Ironic considering the MMR vaccination is supposed to be 95% effective.link

Boncho.... I do feel sorry for you... You normally have solid attacks on alternative science and medical stories. For you to have to resort to Strawman attacks shows that a nerve has finally been hit.

Please try to put a spin on :
"the CDC took deliberate action to retroactively alter the outcome of the autism study by arbitrarily eliminating most subjects from the study, thereby shrinking the sample size".

Does that mean you now support altering data for vaccines which do not support the results that big pharma supports? Folks, Boncho says 'Nothing new here.' ... guess it is time to move on...
edit on 26-8-2014 by R_Clark because: Grammar

The article and testimony by one of the persons originally at the CDC found that those very studies are .......drum roll... falsified!

and the data sets were altered to specifically make sure that black cohort groups were considered safe...

posted on Aug, 26 2014 @ 09:55 AM
link
People should be afraid of vaccination as you don't know what the hell these days they are putting in the stuff. IT isn't like the 1970s, when you didn't have high levels of autism popping out through too much mercury exposure.

Tuskeegee Experiment is enough right there to be afraid of vaccination. AIDS was transmitted to the original homosexual population through Hepatitis B vaccinations on adults...all proven facts if you research enough. Yes, they were adults, but you see where I'm going with this?

ATS featured an article months back that half of the US population was going to be autistic by 2050. That thread mentioned the topic at hand, and yes, no surprise there that vaccinations on the children would be an easy way to create a dumbed down, not exactly bright population of people.

Before we jump on the people that are anti-vax, we should at least explore the sins of the US, and how they have previously behaved on its citizenry.

posted on Aug, 26 2014 @ 10:17 AM
link
A friend of the family has a son who, when he was 15, got a multi-vaccine mega shot booster whatever you call it. Within a short time (days/weeks) he developed "The Worst Case" of Crohnes Disease Riley children's hospital had ever seen. Before that he was perfectly healthy and active, as is the rest of the family.

He is scheduled for his first MMR vaccine in 60 days.

I am not afraid of science, but I do not think adding dead virus cells in a cocktail full of virus "activators" protects my son. At the same time, I cannot enroll him in public school without exposing him to this vaccine.

If there were no laws forcing him to be vaccinated for public school, I would not vaccinate; but I feel I have to.

I wish I had a free choice as to what other people put in my son's veins....

He is scheduled for his first MMR vaccine in 60 days.

I am not afraid of science, but I do not think adding dead virus cells in a cocktail full of virus "activators" protects my son. At the same time, I cannot enroll him in public school without exposing him to this vaccine.

If there were no laws forcing him to be vaccinated for public school, I would not vaccinate; but I feel I have to.

I wish I had a free choice as to what other people put in my son's veins....


My kid is starting school next week, and no, he hasn't been vaccinated except for DTap. We have refused and he is going to school. What the schools don't tell you is that you do have a choice, they try to intimidate you into having vaccinations, but you have the right of refusal.

Someone has instructed MSM to hush this up...They should be made to suffer....As in, Strip them of everything they have ever owned, then do something nasty to them.

Ain't that a shame? I'm afraid the damage has already afflicted the minds of the gullible.


My kid is starting school next week, and no, he hasn't been vaccinated except for DTap. We have refused and he is going to school. What the schools don't tell you is that you do have a choice, they try to intimidate you into having vaccinations, but you have the right of refusal.

I have authorized all vaccines so far (all contain no mercury or aluminum so far) and he has been great.

But the MMR has always been the one my wife and I wanted to refuse, as it has the most nefarious history of them all.

I will share this news with her tonight and see how she feels. Knowing I have the right to refuse eases my concern a bit.

Thank you for replying.

originally posted by: Murgatroid
Quite a few MD's have also come out and said that the medical mafia is part of the population reduction agenda.

This leaves little doubt about the real agenda behind all of this: murder and genocide.

"There is a great deal of evidence to prove that immunization of children does more harm than good." - Dr. J. Anthony Morris (formerly Chief Vaccine Control Officer at the US Federal Drug Admin.)

"Much of what you have been led to believe about immunizations simply isn't true. I not only have grave misgivings about them, I would urge you to reject all inoculations for your child. Although I administered them my-self during my early years of practice, I have become a steadfast opponent of mass inoculation because of the myriad hazards they present." ~ Robert Mendelsohn, M.D. 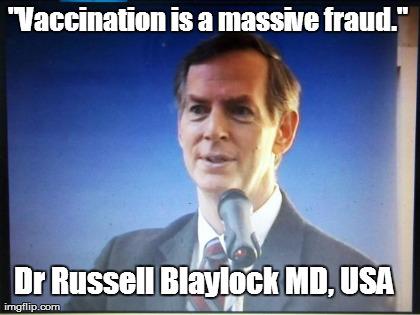 "This..forced me to look into the question of vaccination further, and the further I looked the more shocked I became. I found that the whole vaccine business was indeed a gigantic hoax. Most doctors are convinced that they are useful, but if you look at the proper statistics and study the instances of these diseases you will realize that this is not so . . . My final conclusion after forty years or more in this business [medicine] is that the unofficial policy of the World Health Organization and the unofficial policy of the 'Save the Children's Fund' and ... [other vaccine promoting] organizations is one of murder and genocide. . . . I cannot see any other possible explanation. . . . You cannot immunize sick children, malnourished children, and expect to get away with it. You'll kill far more children than would have died from natural infection." --Dr Kalokerinos MD 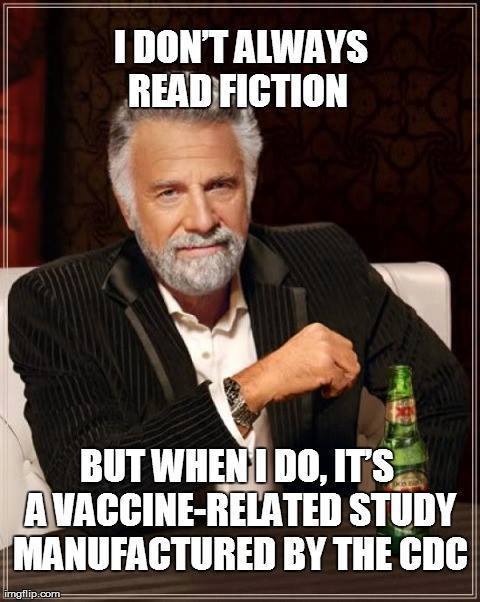 The concept of immunizations is sound. The problem is with the vaccines. There are apparently (this is the conspiracy part) "safe" vaccines that are available "in the rich neighborhoods" that are actually proper immunization injections.

In the "poor" neighborhoods are where you find the crappy "roll the dice and maybe you get the slow kill" trash filled vaccines.

Look, I know what I've personally seen. Also I know when I was a kid I had vaccines for standard immunizations and they were no big deal. They weren't all ganged up in combo shots all at once either.

As for what to do? I don't know. Most states have a "religious exception" to the vaccinations rule.

Maybe you can get the Dr. to sign a form saying that if your child develops autism or any other unusual ailment you get a million dollars and can punch him in the nuts once a week for the rest of his life. Maybe then he'll go to the cabinet and get out the good vaccine that he gave HIS kids.

Apparently there is CDC documentation stating that they "accidentally" gave out millions of doses of vaccines in Africa that were tainted with AIDS. Google it.

posted on Aug, 26 2014 @ 11:54 AM
link
Last year I received the twinrix shot. Shortly after I suffered from allergic asthma and broke out in psoriasis. I do have allergies that from time to time manifest themselves but that was severe. That was also the first time ever I have had psoriasis and it was widespread. I do believe I had an autoimmune response to that shot.

My niece has autism but I would honestly have to say if there was a trigger point we missed it. The rest of my family and myself had childhood vaccines with no problems.

However, a friend of mine's extended family had a case of SIDS and autism they strongly feel was caused by vaccine injuries.

I am just glad I don't have to make that choice for my children now.

originally posted by: Rezlooper
I would say that anyone who is for pumping little kids full of poisons (like lab rats) so that Big Pharma can line their pockets is a little questionable...IMO!

I'm struggling to even recall the last time I paid one penny for a vaccination. I mean I have my insurance premium (a whopping $300 a month for the family) but I don't even have a co-pay for vaccinations.

originally posted by: charles1952
Allow me to indicate a bias which, I believe, many have. I don't know a great deal about the medical reports available. I have heard ATS talk about conspiracies and false information from questionable sources for years. I have seen claims about the death of millions or the end of the world.

So when you serve up a story from Natural News and Global Research, my reaction is, "Oh, no, not another one. I guess I'll wait for some authoritative source, but this whole thing is getting boring."

Just offering my reaction, in case you want to know how it strikes one person.

"Authoritative Source" eh? Which ones are those again? Part of the problem is that all the authoritative sources are owned and controlled by the same entities pushing vaccination. I'll assume you can understand your own flawed logic from here...

posted on Aug, 26 2014 @ 12:30 PM
link
a reply to: usernameconspiracy
We all pay -meaning taxes. I don't think Big Pharma is paying for them out of the goodness of their hearts.