Rock that looks like "Enlongated Skull" on Curiosity Sol 726

posted on Aug, 25 2014 @ 04:31 AM
link
Despite attempts to hide and confuse the reality of Mars through the use of sophisticated imagery tools, algorithms, and false colors, and what really surrounds the Curiosity rover on its way in Gale Crater, something seems to slip-out. On sol 726 Sol 726 appears an anomaly what looks like the statue of an elongated skull and that despite efforts to disguise it technical, some algorithm did not work, revealing an ear, eyes sockets, a jaw and the shape of an elongated skull... 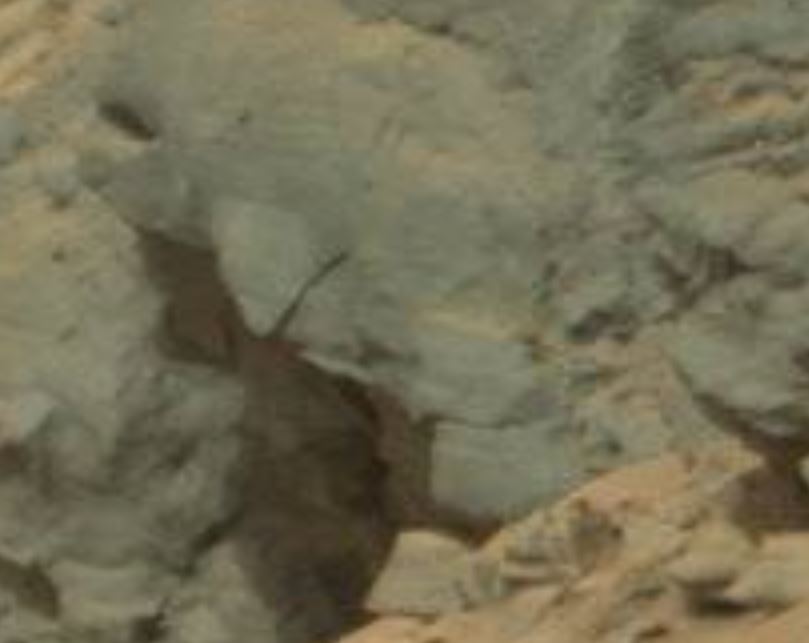 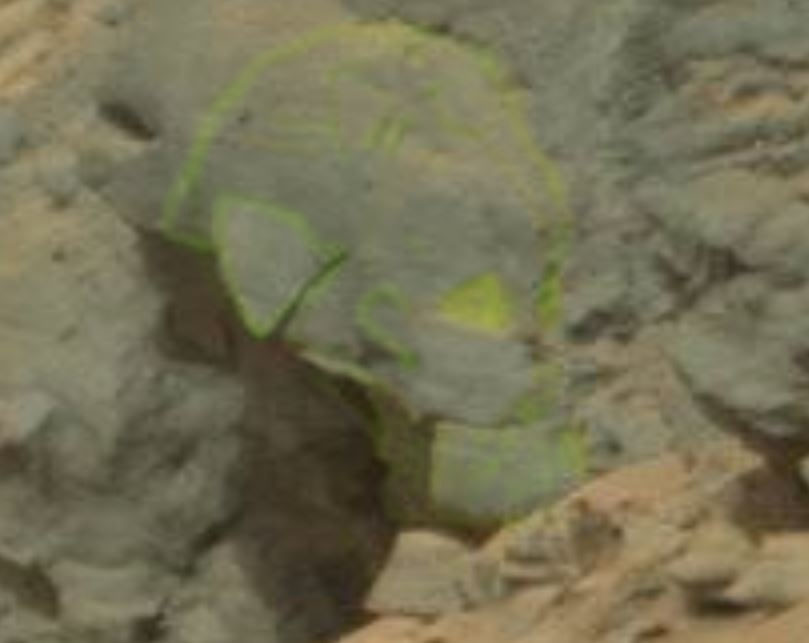 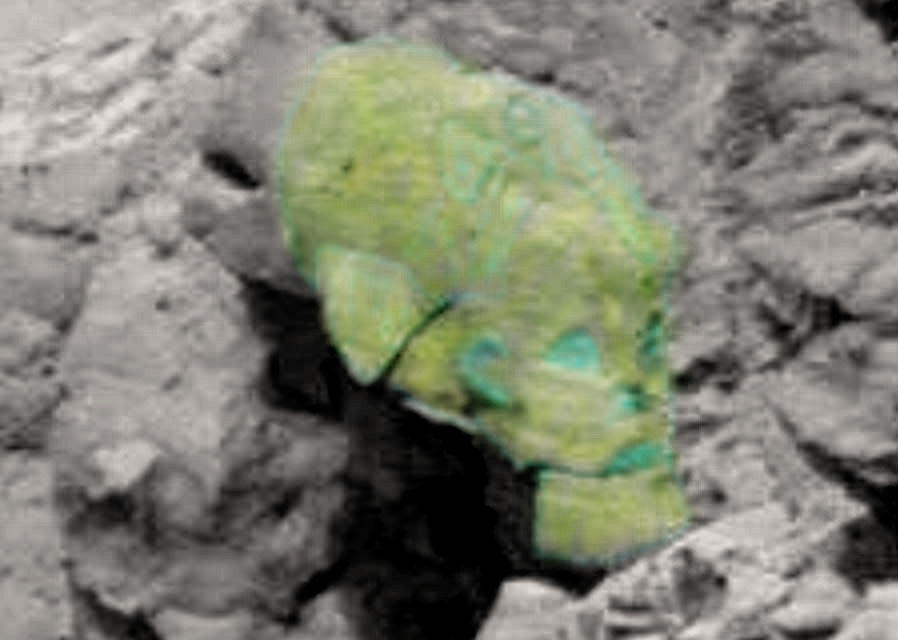 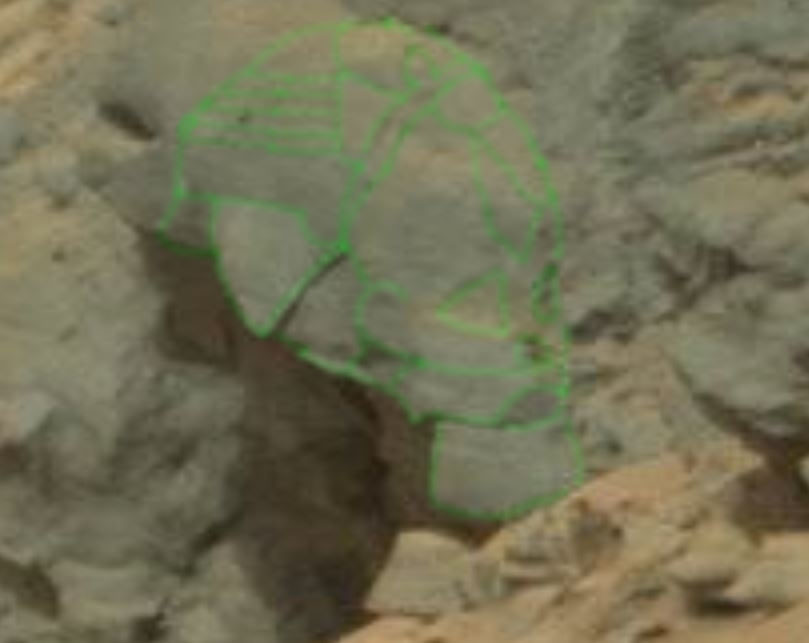 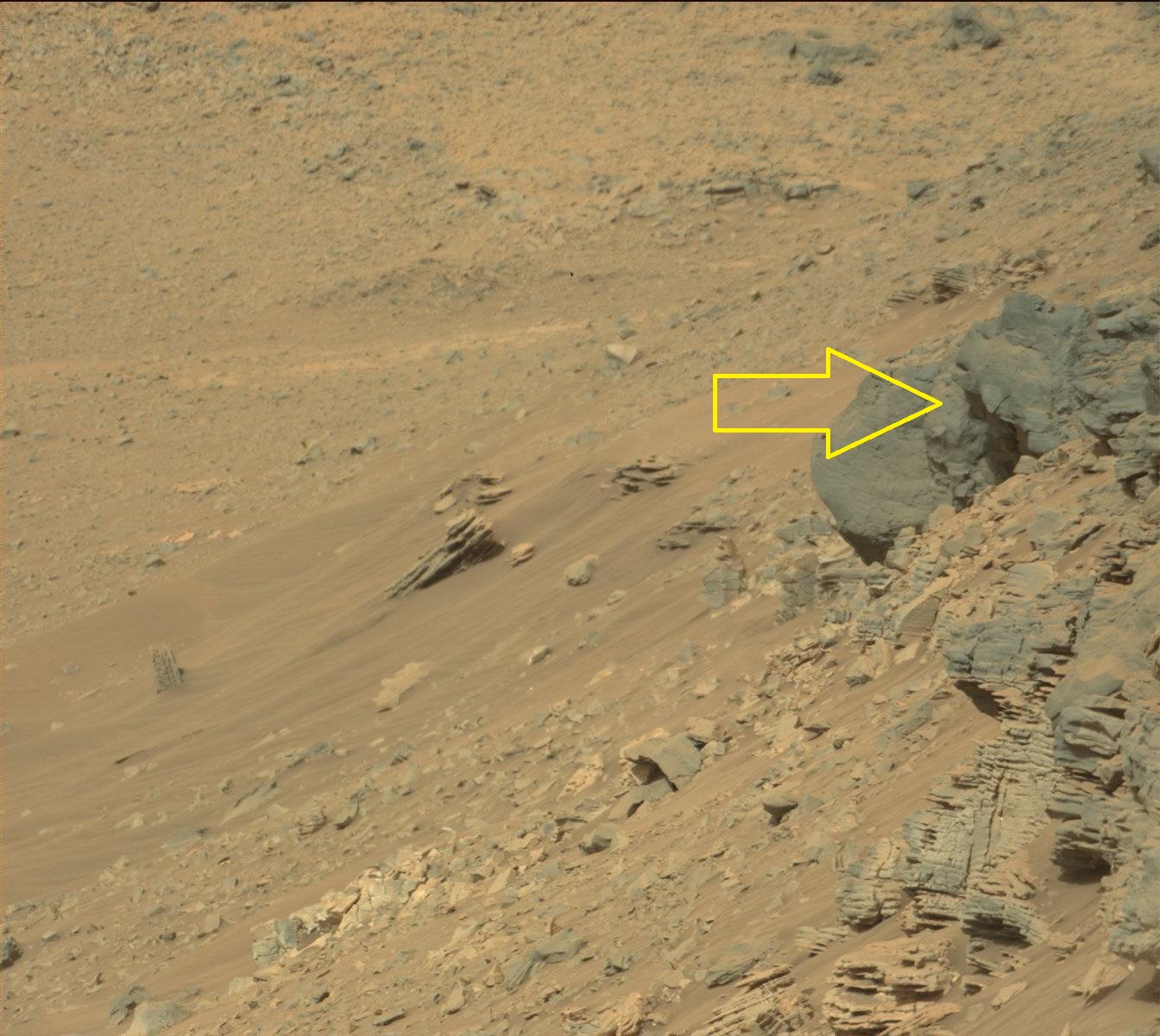 posted on Aug, 25 2014 @ 04:37 AM
link
I'm so sick of these threads.... It's called matrixing. You look hard enough at something, you eventually see what you want to see. I really hope this doesn't jump to the top of the forums, like that last one.

Looks like rocks.
Colouring it in didn't help either.

Fan of your work, but not this one.

Once again S&F as I always look forward to your threads, unfortunately I dont see it this time.

Has a vague heady type shape but (to use whats now an ATS cliche) "Its just a rock!!!!"

When do we just say that it is a stone? I am not a dis-believer of potential life on Mars and have had some interesting conversations with Andrew Basiago in the past who claims that he teleported to mars. This should mean that I have an open mind….

This is a rock that happens to look like a rock that can be interpreted to look like whatever the observer deems it to look like. I am sure that if this were a monument of stone left by an advanced society, It might look like this:Cool faces in rock

You might be onto something here. Would be interesting seeing different angles of it, if available. Also, wonder what the "skull flap"-highlighted seemingly elevated triangle is.

posted on Aug, 25 2014 @ 05:11 AM
link
I went back to the original after being shown everything. I still see a fossilized butterfly with it's main body about one finger width wide (on my screen), the left wing fully visible and the right one cut off. Sorry, best I can do.

originally posted by: Aedaeum
I'm so sick of these threads.... It's called matrixing. You look hard enough at something, you eventually see what you want to see. I really hope this doesn't jump to the top of the forums, like that last one.

So sick of them, that you read them anyway, and then comment on them, to say you're sick of them?

originally posted by: Rosinitiate
Is his ear coming out of his eye? And what's with the mud flap on his skull? 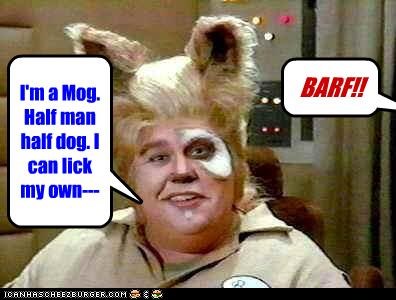 
I couldn't disagree more. I read these threads because well you just never know. I believe is is entirely possible life existed on Mars and perhaps beneath the soil still does.

I also believe Arken means well but has the opposite affect. Meaning that everytime he posts these threads with flimsy at best evidence time and again only distracts people from genuine issues and alternative theory. It is the blind allegiance to these threads that make Phages post in another thread all the more true:


Funny, with the advent of the internet with free access to a potentially unlimited database, we get people buying into claptrap from the anti-vaccine, anti-GMO, anti-anything that stands up to critical thinking, they're spraying us, crowd.

It would be better, IMO (for what its worth) to keep one continually running thread where pics can be posted. Beyond that, all I see is attention grabbing and a wild imagination. I try to butt out of these threads but I truly think they are counter productive. But what do I know, I'm still hunting Dodo's? *shrug*
edit on 25-8-2014 by Rosinitiate because: (no reason given)

You must have a lot of free time on your hands!

You can color it any color you want it still looks like a rock.

Keep looking!
Some day you could find something amazing.

I suppose in the Pompeii sense I see what you see. Thanks for giving us something to ponder, Arken. It doesn't matter if it isn't what you suggest. Assuming we are the first and only is presumptuous. Life has been discovered at the deepest depths below light and in serious temperatures and pressure. Maybe too where we won't admit, like on the moon. Geology and anthropology have revealed many wonders to us but not yet where you focus in to look. The theory that we may be a hybrid isn't so far off in my opinion. I appreciate your efforts. I don't care what anyone says. Bravo Zulu.

originally posted by: Aedaeum
I'm so sick of these threads.... It's called matrixing. You look hard enough at something, you eventually see what you want to see. I really hope this doesn't jump to the top of the forums, like that last one.

I guess it would be too much effort for you to NOT click on these threads that you are so sick of wouldn't it? It's just so hard to ignore one thread out of all the threads posted on here daily. Your struggle is real.

a reply to: Arken

I see rocks Arken! Usually I see something similar to you, but this one is a stretch for me this time.


I've no doubt that if anyone can find the Holy Grail...it will be you.

Thanks, but I'm sure that it will be someone else. Maybe a new member of ATS or maybe You, if you watch martian images from a different perspective.

A true shiny remnant in the rusting of the subject matter on these boards.

I'm so glad Arken doesn't take the hate and discredit he gets on these boards to heart.


Despite attempts to hide and confuse the reality of Mars through the use of sophisticated imagery tools, algorithms, and false colors

So you castigate NASA for allegedly using "false colours" to make "skulls" look like rocks.......then you go ahead yourself and use false colours to make a rock look like a skull