posted on Aug, 24 2014 @ 03:41 PM
link
I recently moved from a part of Canada that rarely gets to see thunderstorms. When I arrived in Cold Lake, Alberta, the only thing I was really happy about was to be able to experience storms again. I grew up in the Niagara Region near Lake Ontario, where I was always inundated by thunder and lightning.

Every storm that has gone over me this year has been recorded on my Iphone. The lightning captured on the following video is no different, except for the apparent craft that the lightning seems to be striking in mid air. In addition to that, four minutes later I was lucky enough to catch a second strike. The second strike looks different than the first one, but that could of been due to any number of variables. The first strike IS more convincing than the second. The outline of the second strike is very intriguing though.

I wasn't very enthusiastic about the video in the beginning, until I started zooming in and taking screenshots on my phone. Following that, I looked at hundreds of photos of lightning strikes on the internet and the only pictures that seemed consistent with how the lightning in my photos behaved was in photos of jets being struck. In my mind that lent creedence to my images.

Lightning is very erratic, but still seems to follow a fairly straight path. In my video you can clearly see the lightning striking something that's invisible to the naked eye in mid air. There are also secondary bolts that you can see coming off the object, above it and below it, after the main bolt hits it. When the video is zoomed in, you can clearly see the bottom of the craft illuminated.

This is the first video of it's kind for me because it's the first time I've ever noticed anything in my photos and videos of lightning that was strange. The images could have been adjusted better, but I wanted to get this up asap so everybody could see it. I'm still playing with the pictures to get a clearer image.

Cool lightning shots
The cloaked UFO strike however is a bit of a stretch IMHO.

Thanks. We, collectively, need to keep our cameras aimed at the skies.

posted on Aug, 24 2014 @ 03:57 PM
link
I certainly see what you mean with the first lighting strike. It does appear to be something invisible struck by the lighting.

It looks like you aren't the only one doing the watching out there OP. Your a UFO/Ghost solo hunter - and it looks as though the hunter is being observed!

S&F - Thanks for sharing.

I'm glad you saw the same on that first strike. I definitely think so too. We're all being watched all the time.

If that were true there Nikola Tesla, it would be more prevalent in storms. It would be super heating all the molecules through the air that it travels, not one out a thousand strikes or more.

posted on Aug, 24 2014 @ 04:12 PM
link
You're a UFO/Ghost solo hunter, which is awesome. When you have a particular attachment to some subject you're going to be more apt to see things that make you want to confirm your research. As VoidHawk pointed out it is heated air. The temperature of the air during a lightning strike is going to be around 30,000 C.

Just to add: you'll need something better than an iPhone video to convince any rational thinkers that you've found a UFO. To show you that what you have found is not an anomaly here are pictures of the same phenomena from different parts of the world. 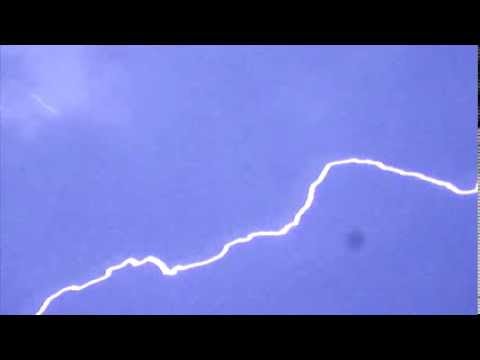 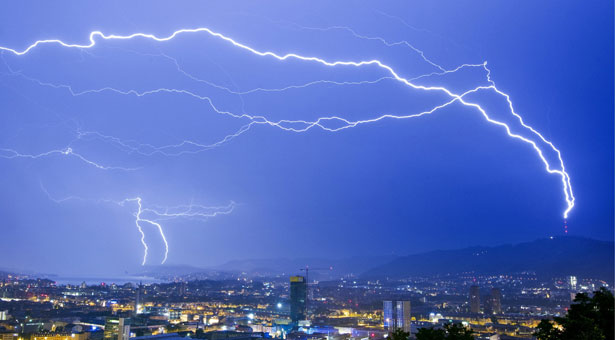 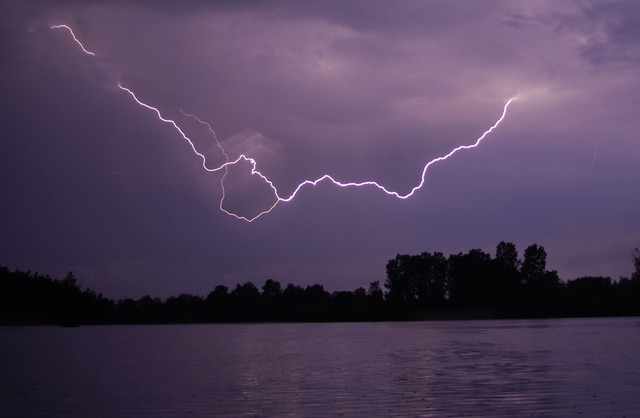 So by your logic, since you dont know what it is, its a cloaked ufo?

It is a flying object that is unidentified. The lightning appears to be striking something that is invisible. The only thing lighting up is the lightning itself traveling the form of the objects surface area. So in my opinion, it is a "cloaked UFO".

Here's an interesting clip I found when discussing the Texas Ufo. Notice how the "ufo" shoots a bolt of lightning before getting zapped itself. 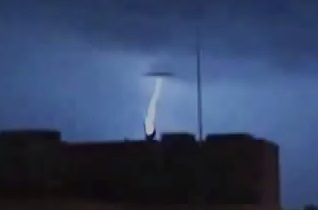 posted on Aug, 24 2014 @ 04:38 PM
link
I think , in the first video, the lightning bolt has changed angle 90 or so degrees and you are looking down the bolt, which would make it look like it hit something in midair. You can see the continuation of the bolt dimly lit behind the clouds to the left. In the second, I do not see anything more than a crazy loop, which bolts do all the time. IMHO.

I was so impressed by the first bolt, I think I was reaching a bit for the second. I agree. The shape it made on the second bolt kind of looks like a type of UFO that you see in some pictures. I thought maybe that it was possible that the UFO perhaps was hovering through the storm at low speed to refuel. Thanks for the comment.

I've seen that video. That was an amazing catch.

Oh, it's only a matter of time before things are too obvious and in their faces. I find that most skeptics are actually cynics though. At least actual skeptics do the research and consider both sides. They have objectivity. I can respect opposition from and informed party. What gets under my skin, are those who have opinions that have nothing to base it on.
edit on 24-8-2014 by Verideecimo because: grammar

originally posted by: gortex
a reply to: Verideecimo

Cool lightning shots
The cloaked UFO strike however is a bit of a stretch IMHO.

Lightning acts weird, moving all over the place making spots like that. I never watched a video slowed down like that, but I just think it is naturally what lightning does. Maybe it hits and recharges UFOs all the time though, I can't deny it happened but Ijust can't believe it is a UFO it hit.

But debunkers will swarm because their first rule of thumb is that UFOs don't exist, therefore it can't be lightning striking a UFO. Their logic is perfect given their limited knowledge of the larger matter of which they cannot comprehend.

posted on Aug, 24 2014 @ 06:59 PM
link
well.. I agree with some of the others..it's a stretch, it looks to me like crazy lightning doing random loops and twists..neat shots though.

a reply to: FlySolo
WoW WTH?!
here's another screen cap from your vid 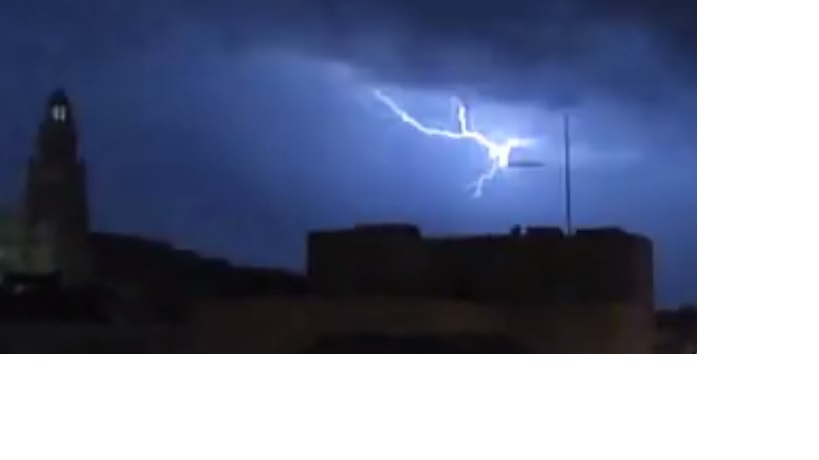