posted on Aug, 23 2014 @ 02:32 PM
link
A new study out speaks of finding the oldest known metal object from the middle east. According to the study, which appeared in the journal PLOS One, the awl dates back to the late 6th millennium, or the early 5th millennium BCE – hundreds of years before it was previously believed that people of the region began using metals. 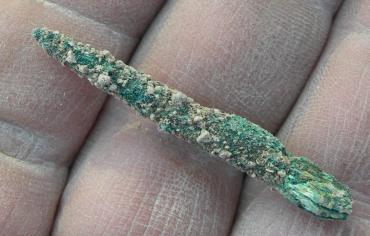 This was found at the Middle Chalcolithic village of Tel Tsaf, southeast of Beit She’an, in modern Jordan

Abstract from the report

The beginning of metallurgy in the ancient Near East attracts much attention. The southern Levant, with the rich assemblage of copper artifacts from the Nahal Mishmar cave and the unique gold rings of the Nahal Qanah cave, is regarded as a main center of early metallurgy during the second half of the 5th millennium CalBC. However, a recently discovered copper awl from a Middle Chalcolithic burial at Tel Tsaf, Jordan Valley, Israel, suggests that cast metal technology was introduced to the region as early as the late 6th millennium CalBC. This paper examines the chemical composition of this item and reviews its context. The results indicate that it was exported from a distant source, probably in the Caucasus, and that the location where it was found is indicative of the social status of the buried individual. This rare finding indicates that metallurgy was first defused to the southern Levant through exchange networks and only centuries later involved local production. This copper awl, the earliest metal artifact found in the southern Levant, indicates that the elaborate Late Chalcolithic metallurgy developed from a more ancient tradition.

Wiki summary of that site

Article on another find there

You can download a copy of another report here
edit on 23/8/14 by Hanslune because: (no reason given)

posted on Aug, 23 2014 @ 02:39 PM
link
Interesting. Now that they can date pretty well. Chances are that that awl was in that area and they know the conditions so can date it from the oxidation. But what if someone has been peeing there occasionally?

originally posted by: rickymouse
Interesting. Now that they can date pretty well. Chances are that that awl was in that area and they know the conditions so can date it from the oxidation. But what if someone has been peeing there occasionally?

The entire story is at the report site noted above

As the awl was found in the sediment collected in association with the skeleton, it was apparently a burial offering.

The location of the awl was nearly 1.5 m. below the original topsoil. It was found in association with a rich burial, in the middle of a built silo, and the burial pit was covered with stones. No other occupational phases were found above or below the burial. Thus, the awl was found in a secure context. As the burial was rich in body ornaments (a belt of 1668 beads) the awl was probably directly associated with the burial.


The copper awl was a grave good, associated with a primary undisturbed burial. The skeleton was found in articulation, adorned with a bead necklace placed on the corpse or worn by the deceased. The ostrich-egg-shell beads found on the deceased are morphologically similar to hundreds of beads found on the floor of the same courtyard, stressing that the grave (and thus the copper awl) and the courtyard, are contemporaneous. In addition, the grave was dug in the center of a built silo base, protected from all sides by the mud bricks, and was covered by stone cobbles. No rodent dens were documented during the excavation of the grave. Very richly furnished graves are not unknown from the Chalcolithic; gold and copper items were included as grave goods, for instance, in prestige burials of the Late Chalcolithic such as Nahal Qanah and Peqi’in caves

So they probably got the dating pretty accurate, because there wasn't any contamination.

One thing though, I wasn't aware there were ostrich in the middle east to make beads out of the shells. I suppose we forced them into extinction by hunters with guns.

So they probably got the dating pretty accurate, because there wasn't any contamination.

One thing though, I wasn't aware there were ostrich in the middle east to make beads out of the shells. I suppose we forced them into extinction by hunters with guns.


They were there up into the 20th century.

Used to be lions there too, up to around the mid 19th century.

The lions ate the ostriches so they killed them.

However your title is misleading . No offense...

That piece of copper is more than three billion years old , minimum - and there are much older metals in the middle east of meteoric origin .

posted on Aug, 24 2014 @ 02:21 PM
link
If that thing is only about 7000 years old, it looks like it's about to become so corroded that it just dissolves into copper oxide dust. So if there was anything much older, it would likely already be dust. It looks like that thing is lucky even to still be in the awful shape that it is.
edit on 24-8-2014 by BridgebyaFountain because: (no reason given)