Supporters of Darren Wilson Reportedly Roughed Up by Ferguson Protestors

Seems two people were actually there in *Support* of the policeman Darren Wilson !!

They had some signs and other protesters got a bit "angry".

The police on scene hurried the two out of harms way.

Story and video as it happened during a news program....

During The Kelly File, Mike Tobin reported in live from Ferguson, where he captured footage of a heated, occasionally violent clash between protestors and a group of white people holding signs supporting Darren Wilson, the Ferguson police officer who shot and killed Michael Brown.

According to Tobin, two white protestors showed up on West Florissant Avenue, one of the main streets in Ferguson and a hotbed of protest, carrying signs in support of Wilson. “Not a very good idea if you’re concerned with your safety,” he noted, adding that their presence immediately drew a “big crowd” and some thrown water bottles.

Supporters of Darren Wilson Reportedly Roughed Up by Ferguson Protestors

Did they really expect anything different? They should be able to protest too, but doing this just makes me feel like they were antagonizing people on purpose.

I am happy that a bunch of folks didn't take the bait and start an all out brawl over it. They have gotten enough negative attention due to the looters and rioters... They don't need any more simply because people choose to be uncouth and stir the pot IMO.

They should have been able to stay and protest without having to worry about it, but we know, they knew, the police knew, that it might not end up well if they did.

It might not be fair... But nobody ever said life was fair.

They can go sell crazy somewhere else... We're all stocked up here.
edit on 8/21/2014 by Kangaruex4Ewe because: (no reason given)

Whilst I fully get their right to put their view across, to do it there, in that situation seems more like trying to provoke trouble. That being said with all the protesters furore about 'first amendment areas' it's somewhat ironic to see them to rise to someone exercising said right.


Yep,that about sums it up.

Either way, they have as much of a right to be on those streets and voice their opinions as anyone else. My fuzzy dice aren't that big, but more power to them.

These protestors are idiots. They don't know anything, but it's still "He was murdered in the street".

Remember the time a ghetto community claimed there was a leprechaun? Same thing. Idiots.

posted on Aug, 21 2014 @ 02:36 AM
link
Sadly, I think you are more than likely correct. It's funny how many folks are calling for justice on both sides, but only consider it justice if their side wins.

If one truly wants justice, then you want it for the victim regardless of who the victim is or isn't. Justice isn't just justice if you agree with it. Justice is justice when everything has been looked at, gone over, questioned, and judged in a way that whoever the true victim is... comes to light at the end of the day and a sentence is handed down.

well that was not a clever thing to do,reminds me of this


If one truly wants justice, then you want it for the victim regardless of who the victim is or isn't.

Well said. Too many people think if they picked a certain side they have to be right. No one should have picked a side. I'm going to be sad either way.

I don't really care who is wrong or right. Just tired of people claiming the kid is a thug and the cop is a murderer. No balance. No waiting for information. It's just one or the other and the majority on either side will cry fowl when this is all over if the side they chose doesn't "win".

A kid is dead and a man has had his life ruined.

posted on Aug, 21 2014 @ 03:01 AM
link
I don't think that these two had a good think before they decided to venture in to a hostile place like that. Did they honestly think that going to the same spot as the Michael Brown supporters was a good idea? I am all for anyone protesting anyway they want but what made them think that they would be accepted with open arms? There is hundreds of people protesting the exact opposite of what they are, it could have turned very ugly, a lot worse than a few thrown water bottles. You can see it in the man's face towards the end, that look of "oh # what am I after doing".
edit on 21-8-2014 by sosobad because: (no reason given)

Because you have rights doesn't mean you should use them stupidly. Standing in front of the White House with your firearm yelling the president is the "N" word is within your rights. But it does make you dumber than a sack of hammers and will probably get you killed. The only one to benefit from the exercising of your rights is the advertisers for the MSM.

posted on Aug, 21 2014 @ 10:57 AM
link
I guess the Brown protesters believe that the right to free speech only applies to THEM!
It`s really pathetic that they fail to recognize their own hypocrisies,but isn`t that a big part of what created this whole situation in ferguson in the first place?

Yep and it also show the sad state, in general, of the human race. Rights are rights if I want them but not if I don't.

originally posted by: Tardacus
I guess the Brown protesters believe that the right to free speech only applies to THEM!
It`s really pathetic that they fail to recognize their own hypocrisies,but isn`t that a big part of what created this whole situation in ferguson in the first place?

Nope the right of free speech applies to all. Its consequences and repercussions are a right to.

If I would of ran around Germany in 1938 with a star on my shoulder screening "Hitler sucks!!!!!" What do you think would of happened?

Like I said consequences and repercussions and I choose wisely.

If I would of ran around Germany in 1938 with a star on my shoulder screening "Hitler sucks!!!!!" What do you think would of happened?

Too bad more people didn't do it. Maybe the whole terrible destruction would have been avoided. Apathy works for those who oppress.

Could this supporter been there to cause a disturbance? 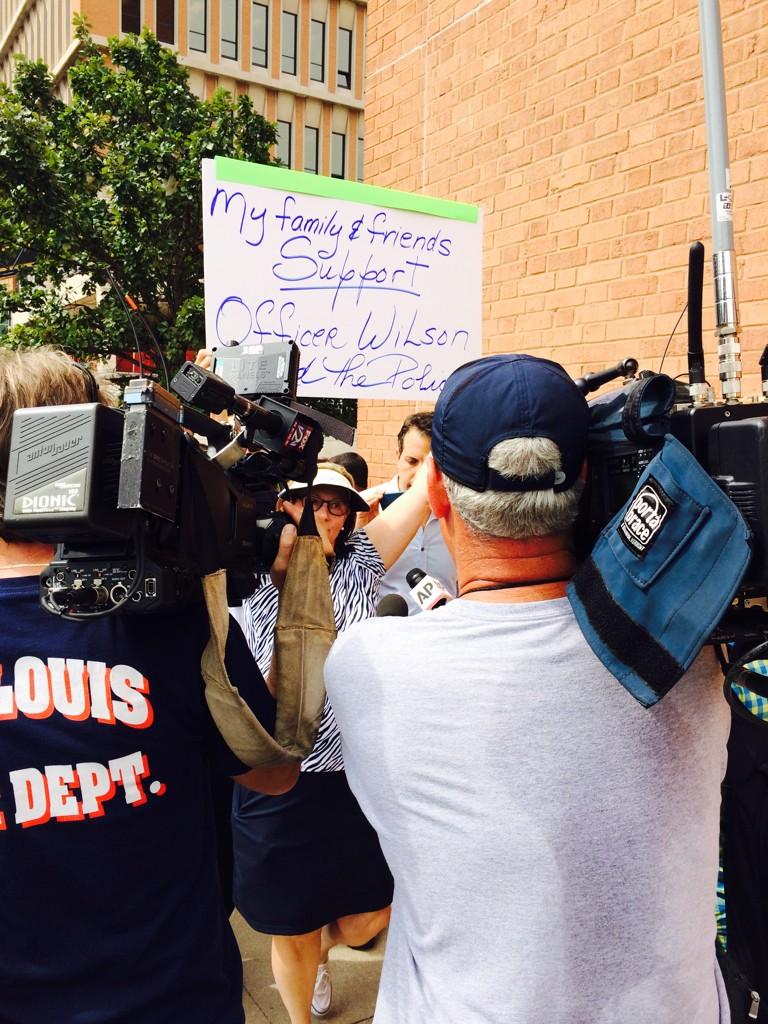 Pro-Police demonstrator in Clayton was whisked away by police as opposing protestors confronted her. 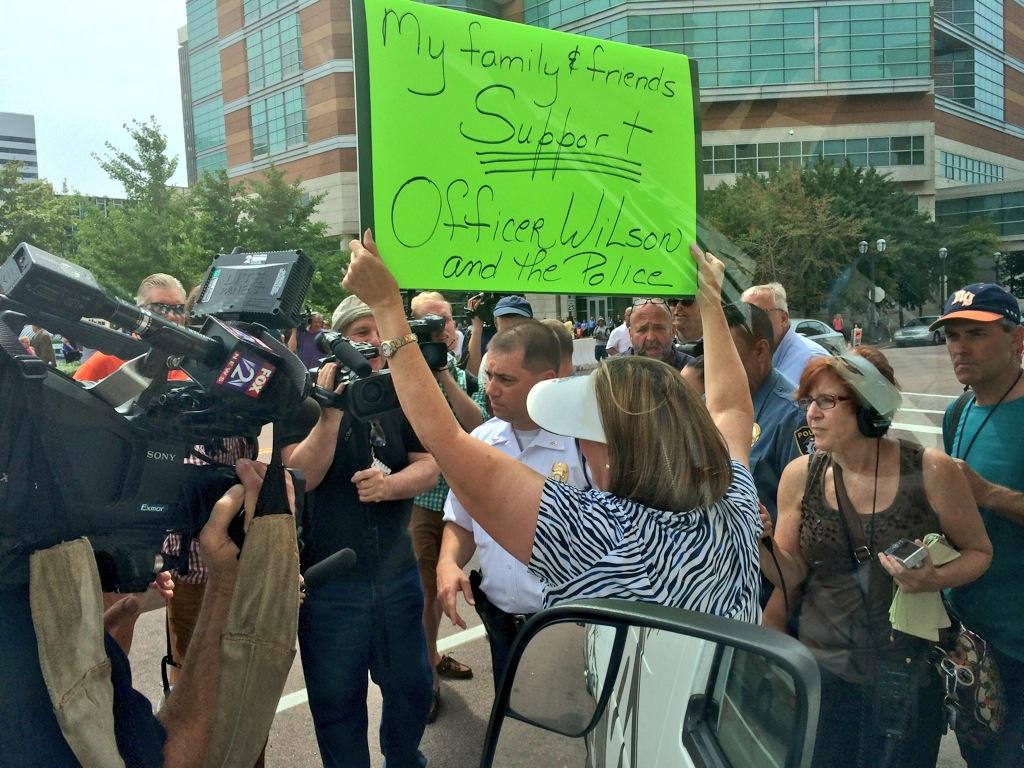 In this view we see police are present.

To me this looks like a publicity stunt, but that is just my opinion.
edit on 21-8-2014 by AlaskanDad because: clarified blue shirt

I'm not surprised. Birds of a feather often flock together. I guess that also extends to supporters.