To Atheists and Agnostics: Your political 'bent' is...???

posted on Aug, 19 2014 @ 06:55 PM
link
Are you registered as Republican? Democrat? Independent?
Of the 'third parties', which one do you most closely align with?
Do you identify as a "liberal" (whether social, fiscal, or both), or a "conservative"? I'm discovering that lots of citizens don't even understand the differences...."liberal" can mean 'radical', 'outside-the-box', 'bigger government', and other things. "Conservative" can mean 'traditionalist', 'smaller government', 'less spending', 'fewer rules', ' and other things.

This is just a general question as I make my way through the mine-field of political ideologies, partisanship, religion, social structures, etc.

Kind of like an ATS poll, but just from a run-of-the-mill member.

All this crap in Israel/Gaza, Iraq/Syria, Ukraine/Russia, Ferguson MO, etc. We're all in an uproar....
so, I was just thinking about it today while pondering things. About how we can reconcile the chaos of today, and move on.

If you self-identify as an Atheist or Agnostic, would you kindly, please share what "political affiliation" you hold, if any?

Is the Green Party in Canada similar to the USA Green Party? (That's my own preference as well.)

It IS a shame - I'm registered Independent also.
Thanks.

I'm an Atheist and I hold no political affiliation.


Do you vote? If you do, which 'ideology' do you prefer?

Im guessing they must have similar goals, there just so small in canada that im sure they wont be stealing my tax money.

Direct Democratic Anarchist - can you describe it for me a bit more? Sounds intriguing, but I haven't heard of it before.

I always vote write in, so I can say I voted, but for the elephant and jackass show that we have going nowadays.

posted on Aug, 19 2014 @ 07:19 PM
link
I always call myself an Atheist, but technically speaking I guess I'm Agnostic... either way, I just don't care for religion personally. I am registered Independent and I guess I lean toward Libertarian ideas.

posted on Aug, 19 2014 @ 07:20 PM
link
Faith, spirituality, and religion have never had any place in my life, as a young man I never saw the point. So I guess that makes me an agnostic (I don't care if there's an afterlife or god).

Politically I've been marginalized by the Reagan Republicans, I was a Republican at one point, and the last man they ran I cared for was Eisenhower long ago, and recently Ron Paul.

These days only the young Libertarians give me any kind of hope for the survival of conservatism.

Edit: To add, Minarchism, libertarianism and the non-aggression principle is by what I define "conservatism".

posted on Aug, 19 2014 @ 07:27 PM
link
I am an atheist and i don't support either end of the same stick as far as my political affiliation goes. I guess it should be no surprise but i feel like i have seen the great Oz for what he is and i am no longer impressed. I feel like most folks just choose a side because they want to feel like they belong to a group of like minded people. That goes for religion too.

posted on Aug, 19 2014 @ 07:37 PM
link
first, my avatar is the Tengu king sojobo from japanese mythololgy. the tengu are the teachers of martial arts and magick in japan. this is from a "ukiyo-e" block print called yo shi tsu ne (spaces to stop ATS clipping it up)and sojobo 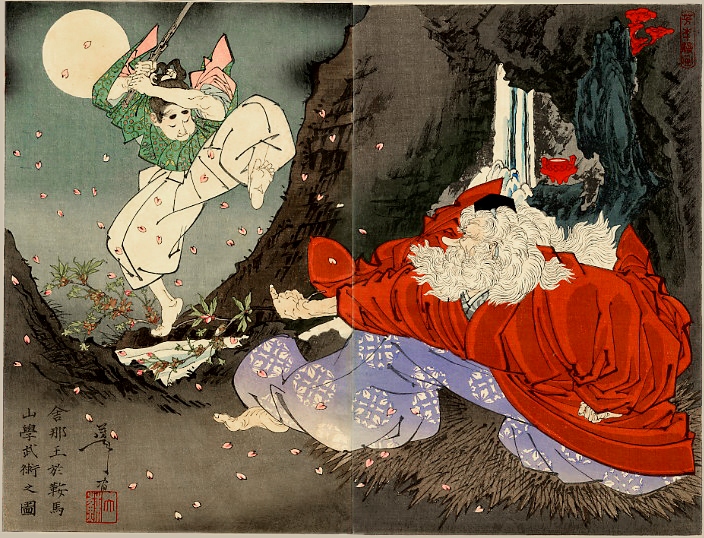 anarchy is the lack of hierachical systems.
direct democracy is the process of self governance without politicians

Direct Democratic Anarchist - can you describe it for me a bit more? Sounds intriguing, but I haven't heard of it before.

posted on Aug, 19 2014 @ 07:40 PM
link
I forgo monotheistic messianic religions as a rule, but I did join the Republican party last go around to support Ron Paul.

If I had to class myself I'd say I'm a socially liberal fiscally conservative Libertarian.

posted on Aug, 19 2014 @ 07:42 PM
link
As a Buddist, technically I'm a atheist. But I certainly do believe in Gods and Devils, Angels and Demons, many beings both more and less evolved - but no one 'creator personality'.

Politically, I tend to vote Green because of it's international reach (I'm looking for a viable Woman's party in the US LOL) but often vote 'the lessor of evils'.

I'm socially liberal - progressive - based on my absolute belief that we must end (individually and collectively) view and acting towards other human beings as though they were not human. We must treat ALL PEOPLE with the respect and consideration we would want to be treated with ourselves.

Fiscally, I'm rather conservative, but in the way the word was used in the past (to conserve resources) not the manner in which it is in use today. I don't even recognise the usage and with respect to our IKE poster, that's more my type of fiscal conservation. I believe in doing things right the first time, in spending up-front to avoid never ending money pits (F-35). I believe in attending to problems (social, economic, ecological) before they become - endless money pits and I believe in spending on infrastructure that benefits THE PEOPLE. I believe in Taxes that are used for the common welfare and not for killing and proping up Big Money. I think security is served by decreasing fear and desparation - not by poverty, theft and injustice.

posted on Aug, 19 2014 @ 07:44 PM
link
I'm registered Dem for a couple pragmatic (first definition) reasons. If registered 3rd Party, it's kinda tough to vote in local elections where I am. I live in a Democrat town to begin with. 3, I DO believe in a lesser of two evils. The Democratic Party as a whole is more likely to at least listen to scientific data, rather than putting their collective hands over their ears and yelling lalalalalala like an 8 year old would. As an Atheist I'll put it this way: One of the first things GWB did was defund US Stem Cell Research (due to his religious beliefs) and one of the first things Obama did was reinstate Stem Cell Research funding ( Despite,... despite his religious beliefs ). I'm Liberal on most issues, but I might surprise you on some others.

I don't vote, but if I did, I'd likely vote Independent.

anarchy is the lack of hierachical systems.
direct democracy is the process of self governance without politicians


If anarchy is the lack of hierarchy, then direct democracy is inherently incompatible with it.

If "the majority rules", you've created a hierarchy right there--the ruling majority and the oppressed minority.

"Direct Democratic Anarchist" is a contradiction in terms. Same thing with anarcho-capitalism.