The risk of an eruption at Iceland's Bardarbunga volcano has increased, with signs of "ongoing magma movement", Iceland's meteorological office says. The risk level to the aviation industry has been raised to orange, the second-highest level, the met office said. Any eruption could potentially lead to flooding or an emission of gas, the office added in a statement.

The Eyjafjallajokull volcano erupted in 2010, producing an ash cloud that severely disrupted European airspace. The Bardarbunga volcanic system is located under the north-west region of Iceland's Vatnajokull glacier.

posted on Aug, 19 2014 @ 06:56 AM
link
I wonder if this is tied to the recent rash of sinkholes which have been opening up in Florida, Siberia, and elsewhere?

The risk of an eruption at Iceland's Bardarbunga volcano has increased, with signs of "ongoing magma movement", Iceland's meteorological office says. The risk level to the aviation industry has been raised to orange, the second-highest level, the met office said. Any eruption could potentially lead to flooding or an emission of gas, the office added in a statement.

The Eyjafjallajokull volcano erupted in 2010, producing an ash cloud that severely disrupted European airspace. The Bardarbunga volcanic system is located under the north-west region of Iceland's Vatnajokull glacier.

Not necessarily. The ice layer on caldera seems to be way too thick for eruption. The magma may find other way, possibly creating new fissure, which could lead to heavy flooding. It can also lead to massive lava flows. But disaster is sure if the main caldera erupts, under the 400 meters of glacier. There is massive pressure under the ice cap.

posted on Aug, 20 2014 @ 01:20 AM
link
The Police Commissioners in Húsavík and Seyðisfjörður have decided to close and evacuate the area north of Vatnajökull following the seismic activity in Bárðarbunga.

posted on Aug, 20 2014 @ 06:31 PM
link
It's interesting, but there was a thread on one of my climate blogs where they were talking about it this. The contention of the posters underneath in the discussion was that at the start of major downturns in solar activity like the Maunder Minimum there was often an upturn in seismic activity with at least one major volcanic eruption that caused sudden and very rapid cooling globally. It was pointed out that this same volcano last had major eruptions at the outset of the Dalton (1794) and Sporer Minima (1477).

Now it's looking like it's getting ready to go again.

Kristín Vogfjörð, seismologist and research director at the Icelandic Meteorological Office, says that the activity is very powerful. “This just keeps going on. This is many times more powerful than what’s been going on in recent years.” Kristín says that a large volume of magma is flowing under the caldera, heading northeast towards the Kverkfjöll mountain range. The magma is staying at a depth of 5-10 kilometers – there are no signs of it moving any closer to the surface. If asked if an eruption is due to happen in the next few days, Kristín responds: “Not necessarily. There’s nothing suggesting that it’s about to. But due to the size and scale of the activity there’s full reason to be vigilant and prepare for an eruption.”

She sounds like she's a bit worried doesn't she? Basically, it looks like she's just hoping this all stays below the surface, but they really don't know what it's going to do. They only know that with all the power and the magnitude of the activity, if it doesn't stay below the surface ... it'll be major.

Kristín Vogfjörð, research director at the Icelandic Meteorological Office, says that the current seismic activity at Bárðarbunga is many times more powerful than any on record for the site. “It’s very powerful,” she says. For comparison she notes that thousands of quakes have been measured at Bárðarbunga in the past week, but in the Gjálpar eruption in 1996 they were only a few hundred. … “While this is going on, it may never reach the surface. But we still need to keep an eye on it because the volume of magma is incredible,” she adds. …”There is no indication that it’s moving further up than that. But if it were to happen, it would happen very quickly,” Kristín states.

And even better, it sounds like they not only have no idea if it's going to blow, but aside from the current conditions, they won't have much of an indication that things are changing before there's a full-blown eruption going on. Joy!

posted on Aug, 20 2014 @ 07:20 PM
link
Daily Kos also has an interesting bit about what kind of thing we might be looking at here if this volcano decides to get belligerent. It really could be a very nasty global event. Certainly it was when this thing's little brother popped off.

Good links thanks ketsuko. On top of that we have a 10-15% decrease in the power of the Earth’s magnetic field within a six month period link and an accelerating pole shift. If we don't prepare for a miserable future we could be kicking ourselves latter as all the signs are screaming at us that something is up.

Geologists have released a computer-generated video showing a swarm of mini-earthquakes threatening to trigger a volcanic eruption in Iceland. The images emerged after Iceland's authorities evacuated an area close to the country's Bardarbunga volcano over fears it could erupt. An update issued by the Icelandic Met Office on Thursday revealed that earthquakes beneath Bardarbunga continued overnight, with magnitudes up to 3.8.

Iceland has issued a red alert to the aviation industry for the Bardarbunga volcano, meaning significant ash emissions are likely. The Icelandic Met Office has warned that a small sub-glacial eruption is under way at Bardarbunga.

On Wednesday, authorities evacuated an area close to the volcano over fears it could erupt. Iceland's Eyjafjallajokull volcano erupted in 2010, producing an ash cloud that severely disrupted air travel. The red alert is the highest warning on the country's five-point scale.

posted on Aug, 23 2014 @ 11:17 AM
link
OK... now I'm getting more than a little concerned. A red alert on a volcano of such devastating potential is nothing to be dismissive about. It could alter the course of history in the northern hemisphere if the worst case scenario comes to be.

Reading ketsuko's links above should be enough to wake readers up to that potential.

posted on Aug, 24 2014 @ 06:17 AM
link
Not much to say about it, good news and bad news. Two biggest earthquakes is bad, but at the same time no eruption yet started (only under the ice). Still code red as an imminent eruption can not be excluded.

posted on Aug, 24 2014 @ 06:25 AM
link
For anyone that's interested here's a great site for the volcano
shows your a real time graph of quakes, live cam and a 3d image of whats happening under the surface. 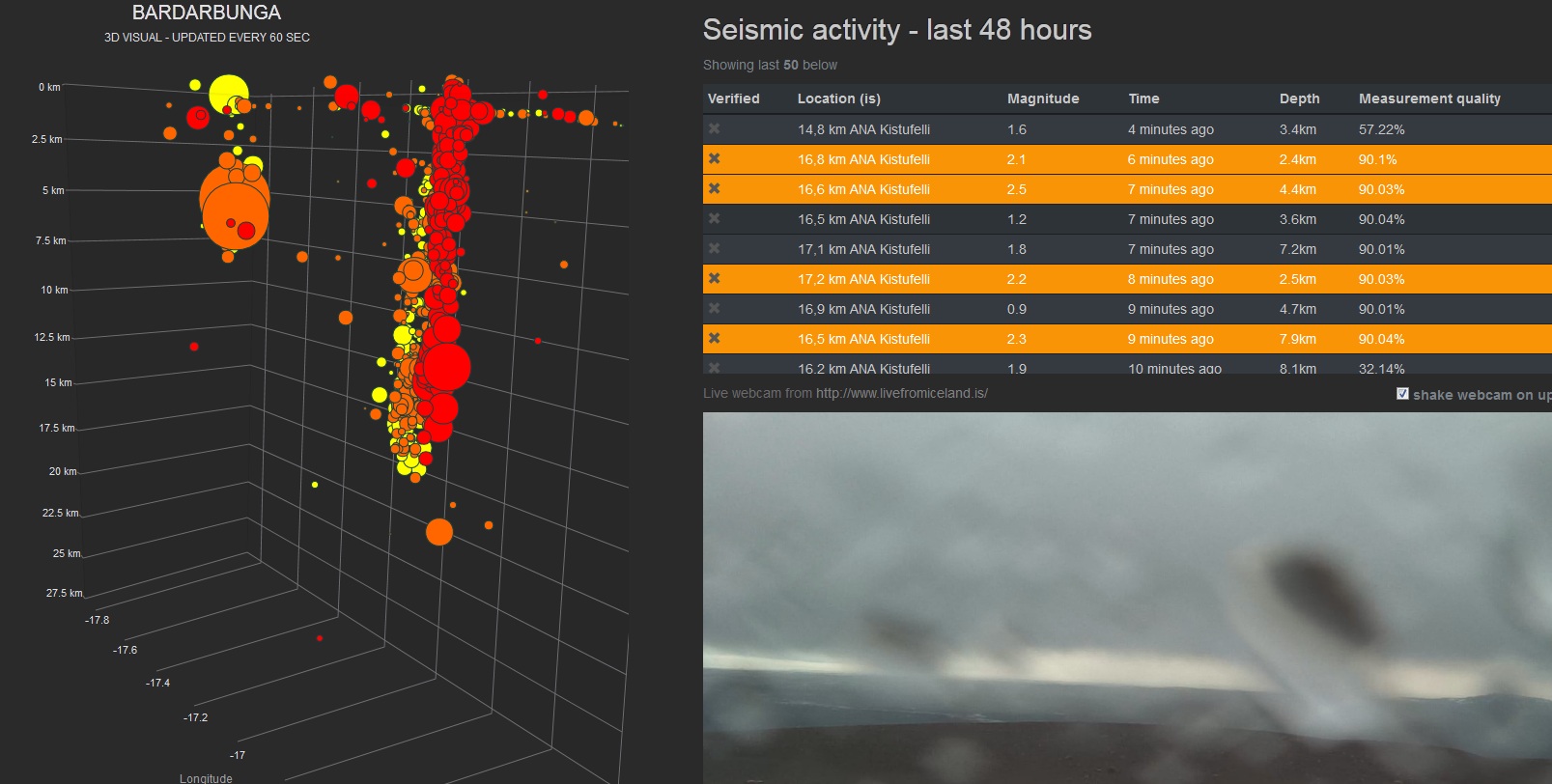 posted on Aug, 24 2014 @ 06:39 AM
link
Even though it's a big volcano they don't expect the eruption to be as big as the 2010 eruption that closed european airspace, it might not break the surface of the glacier at all.

Now it's just sign of magmaflow but no eruption seems to have started yet.


Probably, earthquakes near the Bárðarbunga caldera are a consequence of adjustment to changes in pressure because of the flow of magma from under the caldera into the dyke which stretches to Dyngjujökull, more than 25 km away.

Presently there are no signs of ongoing volcanic activity. The aviation color code for the Bárðarbunga volcano remains red as an imminent eruption can not be excluded.

It's weird. From what I'm reading, the longer it goes with no vertical magma movement the better the chance there will be no eruption just a very large and nerve-wracking magma movement just under the surface. However, the longer it move magma under the surface, the more magma is moving and filling in and at any time, that magma could decide to go vertical making for an eruption. More magma, more pressure, worse eruption.

So, we take our chances. Do we want no eruption but plenty of nervous ulcers? Or do we want the eruption?

The thing is that as of this moment, I think everyone pretty much expects that this will erupt; it's just a matter of when and how much magma moves when it does. The big issue isn't so much explosive it will be although it could produce an explosive eruption under a couple scenarios, but whether or not it will produce a rift eruption that will be long-running and really gassy.

When Laki erupted in the late 1800s it was the volume of poisonous gas, hydrogen sulfide and hydrogen fluoride, that caused so much of the trouble, not the magma or the quantities of ash.


I think everyone pretty much expects that this will erupt; it's just a matter of when and how much magma moves when it does.

True, but it's a little up and down now.

They just updated and changed the aviation color-code back to orange.
CLICK ME


The Icelandic Meteorological Office has decided to move the aviation color-code from red to orange.

Well, orange is for "eruption imminent" and red is for "right now." Right? So it makes sense they would back off since it looks like whatever Bardarbunga is going to do, it's not ready to do it yet ... assuming it does. It was just sort of clearing it's throat out yesterday.