African elephant are being killed faster than they are being born 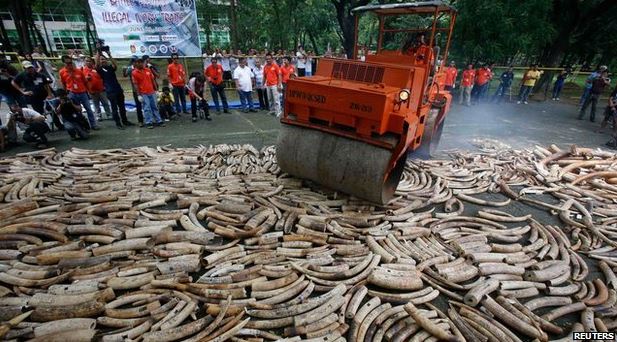 According to this study about the 'global decline of African elephants we're at the point where elephants are killed for ivory and the elephant population can't keep up.

They summarise the significance in these words:

Illegal harvest for commercial trade has recently surged to become a major threat to some of the world’s most endangered and charismatic species. Unfortunately, the cryptic nature of illegal killing makes estimation of rates and impacts difficult. Applying a model based on field census of carcasses, to our knowledge we provide the first detailed assessment of African elephant illegal killing rates at population, regional, and continental scales. Illegal harvest for commercial trade in ivory has recently surged, coinciding with increases in illegal ivory seizures and black market ivory prices. As a result, the species declined over the past 4 y, during which tens of thousands of elephants have been killed annually across the continent. Solutions to this crisis require global action.

A BBC article comments that...

The researchers have found that between 2010 and 2013, Africa lost an average of 7% of its entire elephant population each year.

Because elephant births boost the population by about 5% annually, this means that overall more of the animals are being killed than are being born.

Julian Blanc, who also worked on the study, from the Convention on International Trade in Endangered Species of Wild Fauna and Flora (Cites), said: "If this is sustained, then we will see significant declines over time."

Solutions I've seen have included reducing poverty in the worst areas, drone technology to counter poachers and the failed banning of ivory. There have been exceptions to trade in African elephants that have seen a small number of zoos importing small groups. This has included extra funding and increased acreage to improve the existence of those who live in captivity.

With the 7% deaths versus 5% births, how long will it be until zoos offer the safest and best environments for elephant populations? It seems a sad 'tipping point' when we're possibly looking at a decline in elephants that'll become a chapter in ecological history for future generations. We'll side-step that nasty ol' E-word as long as some keep going in the zoos and parks of everywhere outside of Africa.

When i first the title I thought "Cow tipping but with Elephants!!"

this is no good.

People should hunt and kill poachers IMO.
How sick it makes me feel to see that we will be amongst the last generations to share the planet with Elephants,Rhinos and many other amazing animals.

By systematically eradicating our biodiversity,we tie the noose around our own necks as a species.

That picture is disgusting. 21% of the entire elephant population in 3 years ...

How about we grind their teeth and sell it as an aphrodisiac to uneducated fools?

originally posted by: IamAbeliever
Leave it to mankind. We destroy everything we touch.

So sad about the elephants.

originally posted by: BelowLowAnnouncement
a reply to: Kandinsky

How about we grind their teeth and sell it as an aphrodisiac to uneducated fools?

Economies create this kind of behavior with no Jobs and a need to have Bankers, I mean money, makes Ivory an easy target, Same is true with the Rain Forests. Money once again, is a hate machine.

I agree, it is disgusting and heart wrenching, the Rise of Money as a God will destroy everything in its wake.

The sad fact is that as a species we are gradually creating a world devoid of anything that we cant put in a factory or greenhouse. There will soon be too many of us to allow wildlife to actually be wild rather than a sad exhibit in an enclosure, tribal peeps included. Even genuinely tackling world poverty is likely only be a stay of execution for biodiversity and we look pretty much violently bummed with regard keeping a balance with other life on the planet.

Nothing is sacred - or valued, respected, or nurtured over cold hard cash. Nothing.


Bad news but thanks. F&S

Yea but monies are just symbolic representations for desires within humanity:

*Dissociation by means of abstraction

*Rationalization by means of objectification