So I decided to go and do an "Arken". The image was selected at random and Here is a link to the source. It's image N°83.

This is a compressed version of the original;

I thought it was an interesting enough image as the shadows appear to be reflections upon water in some areas as opposed to just shadows. I'm not saying it is water by the way, it just appears as an optical curiosity, if you'll pardon the pun. Then I noticed the object towards the top left, highlighted in green. At this point I suggest you take a look at the full size source image.

Anyway, the following is a blow up of the object highlighted in green; 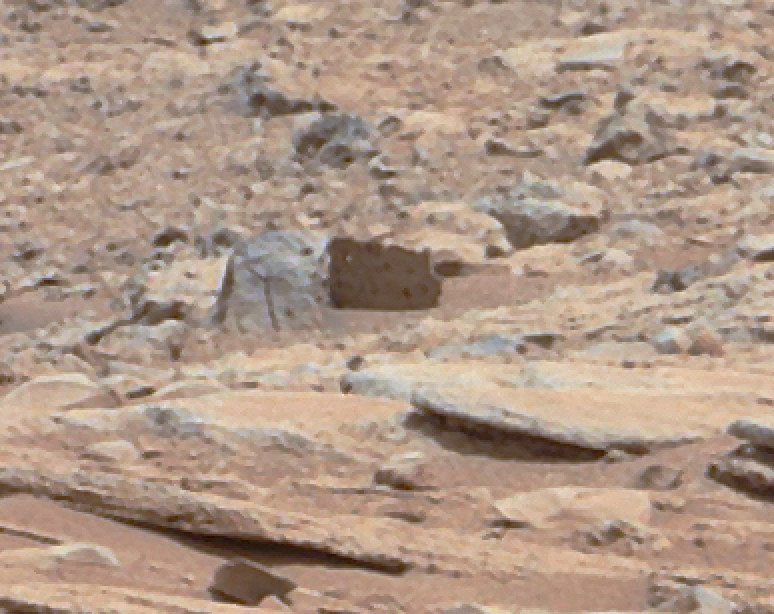 The object appears to have one hole and numerous aligned indentations.

Am I suffering from "Arkensons" disease or is this possibly not a rock?

edit on 18-8-2014 by myselfaswell because: image identification

Looks like someting is "blanked" or "Blacked out" in some way?

posted on Aug, 18 2014 @ 12:27 AM
link
Cool find . The right edge does look a bit smooth and clean cut when compared to the surrounding erosion.

Check out the source for yourself.

posted on Aug, 18 2014 @ 12:56 AM
link
I think it is an odd looking rock (holes too which appear round) but nothing convincing enough for it to be deemed as something other than a rock.

also if you check upper right corner you will notice eerie looking Dodo bird praying on the not yet petrified crush survivors.

that is what I see.

Or perhaps, just a still rock.

Pretty odd indeed! Maybe part of a wall of a defense structure. Those holes are the Gun Ports.(?)
I doubt that actually, but if it was done on purpose, what would ya think the holes are for?

Arken should be Flattered, for all the references to his name here!

Yeah I'm saying it. That's standing water in the picture. You can see a two tone difference at the edge of the sand/earth.

It's much much smaller than that. It looks more like a "fish" plate or connection plate that connects structural steel elements together. About 300-400mm by about 200-300mm.

Ahhh. Thanx for resizing my thoughts on this. That does put a different spin on it.

posted on Aug, 18 2014 @ 04:06 AM
link
A: i recall this image from a few years back... there was a lot of excitement about how it looked like standing water [i got swept up in it too] but it seems what it most likely is would be very fine sand, piled up to the rocks, as opposed to a flat water surface.
i do still secretly [not secretly at all] wish every day that we will learn it's really water after all.

what is totally undeniable is how.... unusual.... a lot of the rocks on that planet are. Sure, erosion, natural forces, and pareidolia can explain a lot, but some of these rocks are SO strange. Never strange enough to be conclusive though, has anyone noticed that? just enough to keep the questions ticking. interesting.

It is quite compelling viewing. There is no doubt that, in some areas, it does indeed look like liquid water and the shadows are in fact reflections.

I'm flattered of the "Arkensons Desease"

But i'm also flattered that other members take a look on Mars and begin to analyze the images of Mars with a different perspective and begin to grasp the anomalies.

Let me be clear once more: some anomalies, that I and other members identify, are just bizarre Rocks with extravagant forms, but others are absolutely inexplicable, despite the heavy work of tampering carried out before the official release.

originally posted by: Sheppie
Looks like a tiny building wall...made of rock but a very cool picture and an in teresting finding!


Shouldn't that be a
Interestrial finding
edit on 18-8-2014 by Denoli because: (no reason given)