We are being subliminally persuaded to pick up guns

posted on Aug, 15 2014 @ 09:10 PM
link
Hey everyone I’m going to post a thread that I feel has a lot of contemporary relevance in regards to the demonstrations and what’s been going on in terms of oppression.

To give a bit of background, I’m a huge hip-hop/rap fan as well as blues and rock. Those genres are essentially my daily diet of music besides what I hear on the radio. I don’t give any thought to artists who rap solely about materialistic things or an artist with a central gimmick. Basically if the artist is only rapping about his partying, his cars, or his money, it’s garbage. That being said, there is a multitude of symbolism in rap music that could be said to be masonic; whether any of that agenda is true or if it is all just a trend in the music industry is a discussion for another place. I believe it is the latter. Now why this symbolism is relevant to what I want to post is due to the fact that the artist in question undoubtedly adds this aspect to his music. So it really got me thinking when I saw what he posted on Twitter about two weeks ago.

Keep in mind that this is an individual (Jo-Vaughn Virginie Scott aka Joey Badass) that makes this music, has received critical acclaim for doing so, and has started to make a lot of money in this industry. He has close to 400,000 followers and that number will rise when he releases his album in the near future. To see these posts for me, is kind of eye opening. I’m not entirely sure what to think about this, that’s why I want to hear other people’s opinion on the matter.

From bottom to top: 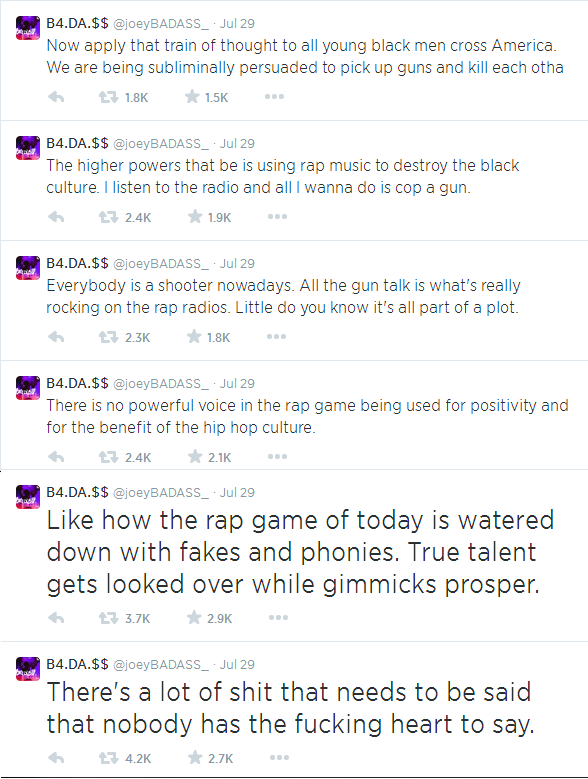 Direct links to the posts in chronological order:


It's most weird to me because there are definitely messages in his music in line with what he just exposed, so in a sense it's highly hypocritical. As he is a regarded artist in the industry, i'm essentially using him as a "boots on the ground" source. Thanks everyone, and i apologize if this is in the wrong section.

Hmm, don't get me wrong I believe there are mind control methods out there that work like MKULTRA but to say people are being made to pick up guns by subliminal music? I see only two possible answers to that 1) it's not real or 2) the people being "persuaded" to do this via music are extremely weak minded.

Not saying it's impossible just sounds far fetched to me. Who knows maybe some people are just that weak in the head, I don't know.

originally posted by: Bassago
a reply to: kicked

Hmm, don't get me wrong I believe there are mind control methods out there that work like MKULTRA but to say people are being made to pick up guns by subliminal music? I see only two possible answers to that 1) it's not real or 2) the people being "persuaded" to do this via music are extremely weak minded.

Not saying it's impossible just sounds far fetched to me. Who knows maybe some people are just that weak in the head, I don't know.


Peer pressure plus the music make it work.

A music genre that glamorizes crime and a violent lifestyle isn't exactly complex mind control, but it certainly can be construed as mind control.

posted on Aug, 15 2014 @ 09:39 PM
link
Don't you think music before was more... gangsta? You said it too. It's a hook and a beat. Its not NWA. It's not Project Pat or Tupac. Its great he's getting a good message out. If anything music today says spend and party.

If weak minded individuals are influenced towards violence by this music, then it's just a side effect of said music?

Peer pressure plus the music make it work.

So we're going with weak in the head. OK I'll buy that.

But thats the thing, he is advocating violence in his songs then he posts this on twitter.

obviously the individuals who are influenced by this are going to be weak minded. the demographic is definitely known. but that doesn't answer the questions of why it would need to be put in music. he said that it was all part of a plot.

Then he's a sell out. Remember what ice T went through playing a cop on t.v.? He can't have it both ways. If his message is going to reach people, he needs to live it.

To this day I can't hear the nutcracker suite without giggling. Ty Nas and Shoot em up

posted on Aug, 15 2014 @ 10:17 PM
link
When Hip Hop first came out it was about having fun and partying, then it started to develop into something great with artists like Rakim and KRS-1, talking about knowledge,wisdom, and intelligence being the goals to strive for.

Then almost as soon as these super positive and popular themes began to be a driving force, gangsta rap was shoved down everyone's throats. When gangsta rap first came out it was a joke, then it was just pushed non stop until it drowned out the positive voices.

I think it was engineered and done on purpose.

i agree. and now we have "trap" music. I can't think of any other word to describe it other than garbage.

i'm not going to call these posts a confirmation that it's engineered, but it's definitely more evidence to support that case.

thanks for the replies so far. it's good because there aren't a lot of weak minded people on the forum here so it's easy to appreciate everyones opinion.
edit on 15-8-2014 by kicked because: (no reason given)

posted on Aug, 15 2014 @ 11:09 PM
link
The music industry in general pushes agendas... I recently showed my friend how Katy Perry was promoting that women should be submissive to men in her lyrics... rap is alike. The popular stuff is following party lines... it encourages division, materialism, subjugation of women, violence, drugs. People like Tupac and Immoral Technique get marginalised.

What songs gave you that impression?


a reply to: Ridhya
i think this type of thing goes beyond just the lyrics and what is repeated in the song.

The thing about all this is that it's hard to prove, but these are things that can be used for good too.

Exactly. She used to sing Christian music. Once in a while it shows.

Although peacock was not intended for your daughter.

edit on 16-8-2014 by Iamthatbish because: predict a text totally winning