Atheism, not religion, is the real force behind the mass murders of history

In the name of creating their version of a religion-free utopia, Adolf Hitler, Joseph Stalin, and Mao Zedong produced the kind of mass slaughter that no Inquisitor could possibly match. Collectively these atheist tyrants murdered more than 100 million people.

While there isn't much for numbered statistics of the crusades and history of that time, modern mass murders are mentioned including the witch trials and the Spanish Inquisition.

The best example of religious persecution in America is the Salem witch trials. How many people were killed in those trials? Thousands? Hundreds? Actually, fewer than 25. Yet the event still haunts the liberal imagination.


I know that ATS is not a big fan of religion, but I ask that those who can please meet me in the middle here. If anyone has statistics of the amount of deaths in historical religious wars they would be greatly appreciated.

I know the argument that religion is the cause of most wars is thrown around a lot. The war in the Middle East might even be considered a religious war vs. terrorism. I believe this article is more about the fact that all kinds of people are involved in mass murder and killing and pawning it all off on religion is baseless.

Please keep it civil everyone. Thank you!

People will still claim it was religion that caused this...

Because Atheism is against religion but still a "part" of religion, thus a religious war...

I don't have any stats, but no matter the reason people will always claim religion...It is the easiest thing to condemn, especially on here!

Good luck with this one, you won't find much support no matter your numbers, unfortunately.


It has been estimated that in less than the past 100 years, governments under the banner of communism have caused the death of somewhere between 40,472,000 and 259,432,000 human lives.[18] Dr. R. J. Rummel, professor emeritus of political science at the University of Hawaii, is the scholar who first coined the term democide (death by government). Dr. R. J. Rummel's mid estimate regarding the loss of life due to communism is that communism caused the death of approximately 110,286,000 people between 1917 and 1987.[19] Richard Dawkins has attempted to engage in historical revisionism concerning atheist atrocities, but was shown to be in gross error.

The holocaust was based more on cleansing the world for the Aryan race and less about religion.

This may help you: The War Audit. This was a BBC funded study to determine the role that religion played in war, and rated all known major conflicts on a scale of 0 - 5, with zero being "religion played no role" and five being "it was all about religion". When they were done, a grand total of three conflicts received a five -- the Muslim conquests, the Crusades and the Wars of Reformation, and the vast majority of conflicts rated a zero.

Here are the relevant charts (right click and open in a new window to see them larger): 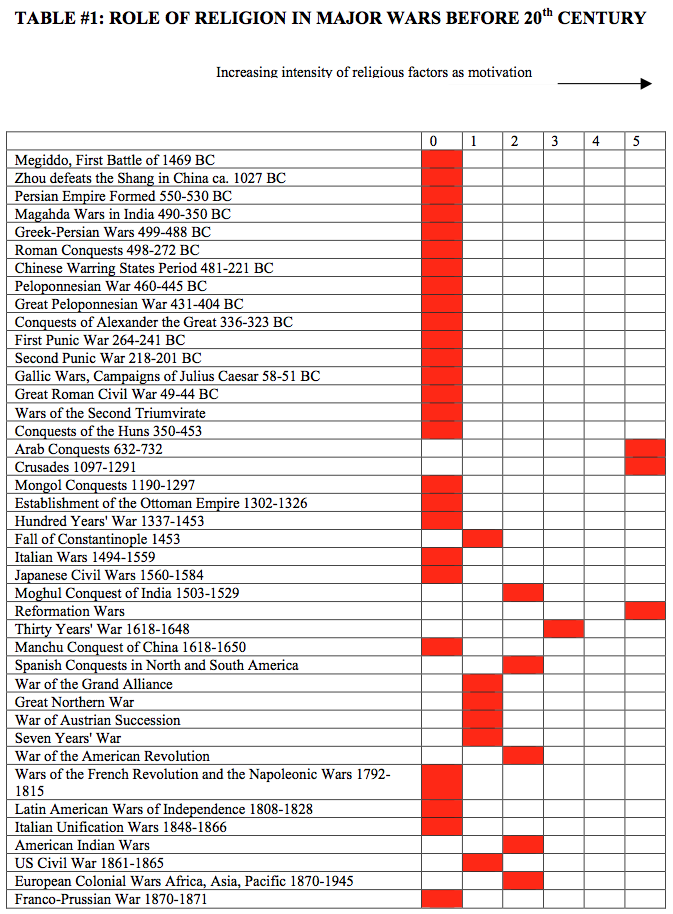 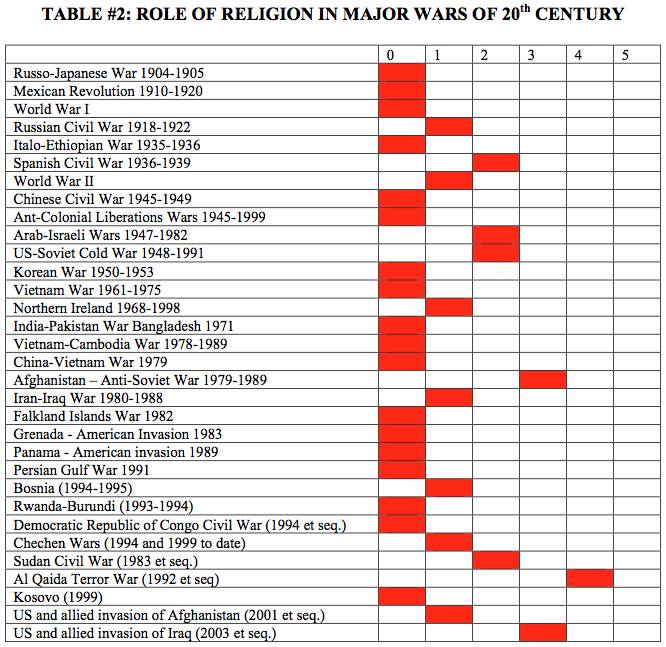 posted on Aug, 15 2014 @ 03:23 PM
link
this religions death count is still rising alot faster today than atheism deaths. I think we should focus on the now as we cant change the past. a reply to: ArnoldNonymous

Okay its a cliche...

We have to learn from our past so we don't keep repeating the same mistakes.

originally posted by: ArnoldNonymous
I know the argument that religion is the cause of most wars is thrown around a lot.


Religion is merely used as a scapegoat to hide the true purpose behind wars.

My theory is that the agenda is to place the blame on God when in reality He has nothing to do with it.

History shows us without a shadow of a doubt, that religion was invariably used as a façade to hide the true purpose of all wars of aggression: That is, the consolidation of power through fear and the acquisition of wealth in all its manifestations. www.inthenameofallah.org...

"...secular ideologies were responsible for the murder of 100 million innocent people during the last century." Source

"And the much greater persecution of priests and believers in 20th Century Atheist tyrannies clearly demonstrates the murderous anti-theism of Atheists." "Then you explain why they kill people in such vastly greater numbers than any religion EVER HAS in all of history!?"

Atheists kill vastly greater numbers than any religion EVER

The core point you failed to point out is Religious slaughter is actively FOR the benefit of the RELIGION.

Atheists slaughtering people does not have anything to do with religion, nor is it for the benefit of Atheism.

The only thing you can say is religion has driven and is driving mass human death and suffering.
Atheism has failed to stop countless more deaths and prevent suffering.

posted on Aug, 15 2014 @ 03:34 PM
link
HOW are they to call them atheist killings, your basically saying ALL those people who kills all those millions had no religious belief, whos to say that they are not agnostic. Either way Religious or not, religion is only there for a reason to have a war, if they have another reason to go to war, than they dont pull the religion card and than called an athiest war lol. Sounds pretty funny if you asked me a reply to: Murgatroid

Assuming this info is unbiased that makes a huge difference in what many people think.

The driving force and the hidden agendas are the same for both.

You cannot separate the two because both are massive frauds.

Nobody has died because of religion. When people "kill in the name of religion," they're actually going against what religion teaches.

A man could claim to be killing in the name of Mickey Mouse -- but that is a bad reflection on the man, not on Mickey Mouse.

Atheist Communist regimes, meanwhile, have killed over 100 million of their own people (and that's a conservative number) in just the last 100 years.

They didn't do it in the name of atheism, precisely, but their killing is not going against what atheism teaches. Because atheism, in essence, teaches nothing. Whenever atheism has been installed as the Official State Religion, the state in question has always given itself permission to do unspeakable things. Always.

When God is not, as Dostoyevsky wrote, anything is permitted.

xDeadcowx
+3 more
posted on Aug, 15 2014 @ 04:00 PM
link
Hitler was Christian Link
Stalin, while have no religion, was not fighting an atheist battle, but a communist one and later embraced Christianity Link

Mao Zedong is a tougher one. It is hard to place him in any category because he didn't believe in gods, but did believe in heaven. His beliefs seems to swing from atheism, to Taoism, with a bit of his Buddhist upbringing showing up from time to time. Similar to Stalin, what he did was in the name of communism, not in the name of any, or no religion.

Christianity on the other hand, has many confirmed deaths attributed to the Christian religion. In 315 when the Roman Empire because legal, Christian mobs destroyed pagan temples and killed thousands of pagan priests. In 356 paganism became punishable by death. In 1234 up to 11,000 peasants from Steding German were killed for not paying church taxes.

From everything I can find, the estimated death toll for the crusades is around 1.5 million.
The Spanish Inquisition has a fairly low death toll, coming it at about 2000 executions up to 1530, but this is based on lacking information and records kept by the tribunals. Along with however many were executed, another 50k + were imprisoned an tortured.

There are many more examples, but I will only add one more, more recent, example to prevent a novel.

In 1994, in Rwanda, up to a million were killed and two Catholic priests were sentenced to death for their roles in the genocide. Link

In summary, to try and paint atheists as the cause of mass murder is not only intellectually dishonest, its a down right lie. Religion has been the justification for more killing than any other force on the planet. People are free to turn a blind eye to it and pretend it didn't happen, but if you want to try and place blame on others for the actions of your religion, be prepared to get the facts brought up again.


A lie is a lie even if everyone believes it. The truth is the truth even if nobody believes it. – David Stevens

The article is more focused on the fact that most mass murders were done that has absolutely no connection with religion.

It did not matter if an individual believed in a specific religion or not. If the reason for the war did not have to do with religion than it is not a religious war.

What about the Spanish Inquisition?
All of central and South America wiped out?

posted on Aug, 15 2014 @ 04:16 PM
link
The kill count of atheists fades compared to how many billions of humans the theists have killed.

Total pre-modern human sacrifices, Aztec empire, can be estimated as high as 6 million

The emperor of Japan, ordering an invasion of Korea in the 16th century, end up causing about a million casualties. the shoguns around that period, estimate 500,000.

The Holy Roman Empire, mostly from the Peasants' War, estimated to have caused about 100,000 deaths.

Total violence between Protestants and Catholics over disputes of religious ideology in the Middle Ages have been conservatively estimated at 14 million. The Crusades, 9 million casualties total

The witch trials of North America

The early 20th century's Armenian Genocide (and yes, it was a genocide), carried out by a vassal state of the theocratic Ottoman empire, cost 1.5 million lives.

Hitler, an avowed Catholic, Mussolini, who had the good sense to be non-religious in his youth but who later converted to Catholicism in 1927, and Hirohito, an avowed participant of the state religion of Japan, launched the Second World War, deaths from this war have been calculated at about 72 million, including the Holocaust. The largely atheistic citizens of the Soviet Union were the biggest victims of this war of theistic expansionism.

the Nanking massacre, which modern historians estimate took about 500,000 lives,

The 1948 Arab-Israeli War has been reliably tallied at almost exactly 20,000 casualties.

The Six-Day War has been reliably tallied at almost exactly 22,000 casualties.

Other forms of modern Hindu violence against other religions or lapsed Hindus (almost entirely in the form of Hindu-on-Muslim violence) can be veeeery conservatively estimated at 25,000.

The 1994 Rwandan genocide, not religious in nature but certainly caused by theists, resulted in about 1 million deaths.

The Ustasa regime's mass murders, which would have been impossible had not the regime been propped up by the Catholic Church (whose fingerprints can be found in nearly every example of 20th century fascism; see "God Is Not Great" by award-winning journalist Christopher Hitchens), tally up to "hundreds of thousands."

The 2001 attack on the World Trade Center

The 2003 invasion of Iraq by the avowed theocrat George W. Bush who said that the war was waged on instructions from god, cost about 1 million lives