Let’s Save the Human Race. Let’s Finish Off The Empire!

posted on Aug, 14 2014 @ 06:29 AM
link
This statement was made by Hugo Chavez in a meeting with his Iranian counterparts, where he received the Islamic republic metal, the nations highest honor, for his role in supporting Iran's stance on the international scene.

The article is kind of long, but I would urge everyone to read it. The battle against imperialist powers has only morphed and cloaked it self, the walls of it's castle torn down and built elsewhere, it is still alive and well, tearing down and building up. It's hand can be seen throughout the Middle East, where countless of lives have been lost, sovereign nations and leaders disposed of, only to fill the ranks with ruthless fundamentalists.

If you've been keeping tally on the wars throughout the Middle East, especially with the beginning of the Arab Spring and it's transcendence into all out brutal war, having an understanding of what was unfolding on the international scene beforehand, one can denote and see how imperial aggression has taken hold of several once sovereign nations now under siege.


The modern world can be a very unforgiving environment, particularly for countries with eccentric ideas about taking control of their own natural resources, redistributing wealth, redistributing land, having an independent foreign policy, that sort of thing. Those countries of 20th century Latin America that attempted to exercise independence and sovereignty were punished for their sins with brutal coups and merciless dictatorships (Argentina, Brazil, Chile). Tiny Cuba has been treated to a half-century of ruthless economic blockade, political destabilisation, diplomatic isolation and a few hundred assassination attempts. When Zimbabwe transferred land from wealthy white colonisers to impoverished black indigenous workers, the ruling classes of Britain and the US made clear their dissatisfaction by orchestrating a vicious slander campaign against Zanu-PF and Robert Mugabe, imposing sanctions, and channelling large sums of cash to the opposition Movement for Democratic Change. When Ukrainian president Viktor Yanukovych rejected the EU’s many-rather-unpleasant-strings-attached loan package, opting instead for Russian economic assistance, he was promptly swept out of office by a western-backed ‘revolution’. The attempts of Vietnam, Korea, Iraq, Yugoslavia, Afghanistan, Grenada, Nicaragua, Libya and other countries to forge an independent path have been answered with all-out imperialist war.

He may as well have Angelicalised(a word?) Tony Blair!!!

Edit: it wasn't Chavez who defended Muabe it was the article writer...
My bad!!!
2nd edit: Chavez has defended Mugabe though SMH!!!
Poor form!!!

That article was.... fascinating. Hysterically funny for a start. A quick question: what imperialist war against Korea and Yugoslavia????

Nobody could deny Chávez’s role in leading the Latin American backlash against neoliberal dogma; nor could they deny the progressive, pro-poor nature of Venezuela’s social programmes. Under Chávez’s leadership, Venezuela’s oil wealth (supplemented by Chinese soft loans) has been put to excellent use.

Makes me boil my blood, among that excellent use are 10 mil US$ for lobby in US, 40bill in corruption 20 bill in electoral propaganda and this nice statistic 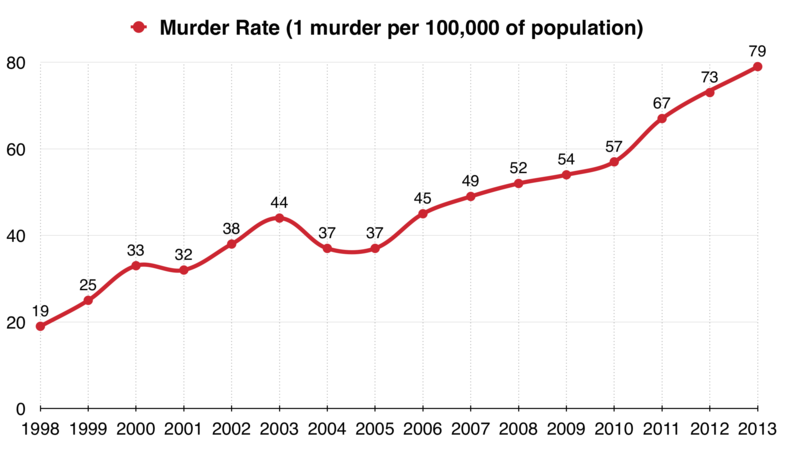 In short the complete ruin of my once beautiful country, anyone that follow that buffoon should go live in petare a week to see how really is the socialism of the 21st Century, only people that support the regime are those that deal with narcotraffic and benefit from the government, those that steal 30% in overpriced imports to the country and the poor people the government worked so hard to maintain poor so they had to depend from the government.

We shall remember Gaddafi our whole lives as a great fighter, a revolutionary and a martyr

I have always said, heard, that it would not be strange that there had been civilization on Mars, but maybe capitalism arrived there, imperialism arrived and finished off the planet

or the fact than even as he despite so much capitalism, he arrived a poor man to the presidency and now his daughters travel the world in private jets despite the fact commoners now cannot leave the country as the government refuse to pay his compromise to foreign airlines. New president also is anti capitalist; his one year in power personal expends cost Venezuela people $5 mill

My Venezuelan pals didn't like Chavez either...
& I always took their word that he was just another despot!!!

Gadaffi wasn't as bad as he was portrayed.. The people in his country actually got looked after through his rulership.. With that pretty much straight after he was murdered the Media finally found evidence that it was possible and highly likely he didn't commit the Lockerbie Bombing after all the years of accusations and demonizing.

He was one guy who could hang out the sun roof of his car driving down the streets in his country without the worry of being assassinated and now look at the state of Libya... Looking over your shoulder just waiting for that bullet to hit you in between your eyes.

I did not site the article to try and portray anyone as glorious, but rather as a brief historical reference that helped to set the stage for what we see happening now in the middle east.

posted on Aug, 14 2014 @ 09:15 AM
link
Fantastic article. S&F. Nice look at the other side of the coin. I tire of being continually told that these countries are pure evil and the people who run them are genocidal maniacs. All so that we can overthrow them and setup some puppet dictator. Anyone who thinks the picture is black and white is deluding themselves considerably.

The reality is that bad people are in power, exploiting as many people as they can, EVERYWHERE. In some places it is more legal than in other places but that doesn't mean it isn't happening in those places. I like the presentation of multiple powers keeping each other in check and the imperialism at bay. It's hard to shake my bias for America, but there are just too many things that America has done and is doing that are just reprehensible for me to claim us as the good guys all the time.