A good source of French articles about UFOs

The Roswell incident was in 1947. It was sensational news in the US and before long the popular ET myth gained strength. Was the military hiding a bungled development attempt? Operation Paperclip was underway and those foo fighter engineers were where exactly, in Russia or the USA?

Five years before the Russians launched the Sputnik into space in 1957 in an orbit visible to those on the ground, the first meeting to assemble information on flying saucers came about. (Could sightings have been linked to Russian or US development trials?)

Before WWII the topic of space exploration was introduced but it was interrupted by the war, and resumed afterwards. It was presented at the World's Fair and so the notion of spacemen and space vehicles was introduced into common discussion, as well as space weaponry development.

Basically, there was a lot of talk and common interest in flying saucers after WWII. People began reporting sightings to the Ministry of Transport and various police and armed forces agencies in Canada and the USA.

Initially the sighting reports were treated in either of two ways. The first was that they were dismissed altogether as nonsense and hallucinations. The usual debunking took place, blaming hysteria, overactive imaginations, fear mongering and even wishful thinking, hoping for fame. None of the complaints were taken seriously. The second way of treating them involved a short investigation, but they too were relegated to the trash heap.

However some people decided that if a different approach were to be taken, they could better get to the bottom of it. The Air Force was curious and also wondered what the Russians were up to. They knew Tesla's work was being studied there.

*Don't forget that the Russians launched Sputnik just a couple of years after this meeting, surprising and shocking the world, as many had not heard of foo fighters back then.*

Within hours I would actually hear its signal rebroadcast on network radio. Before the weekend was over, I got to hear it directly on a shortwave radio as it passed overhead.

Not only could you hear Sputnik, but, depending on where you were, it was possible to see it with the naked eye on certain days in the early morning or the late evening when the sun was still close enough to the horizon to illuminate it. While standing in the middle of the college football field a week or so after the launch, I first saw the satellite scooting across a dark evening sky orbiting the Earth at a speed of 18,000 miles per hour. Watching Sputnik traverse the sky was seeing history happen with my own eyes. To me, it was as if Sputnik was the starter's pistol in an exciting new race. I was electrified, delirious, as I witnessed the beginning of the Space Age.


So it seemed imperative that they would form an investigative group and find common characteristics in the descriptions of the sightings and take it from there. I won't spoil it any further for you. It is but a few pages done on an old typewriter.

I hope you find it interesting. For those who wonder why the AVRO saucer is always mentioned in UFO history, it begs one to link from things like this document to the launching of Sputnik and to North America's urgent need to catch up to the Russians. A good look into UFO stuff should demand a world-wide overall perspective, not just regional or local, imo, but include weaponry and satellite development as well.

Here are the minutes below. You may have to enlarge it to read it. 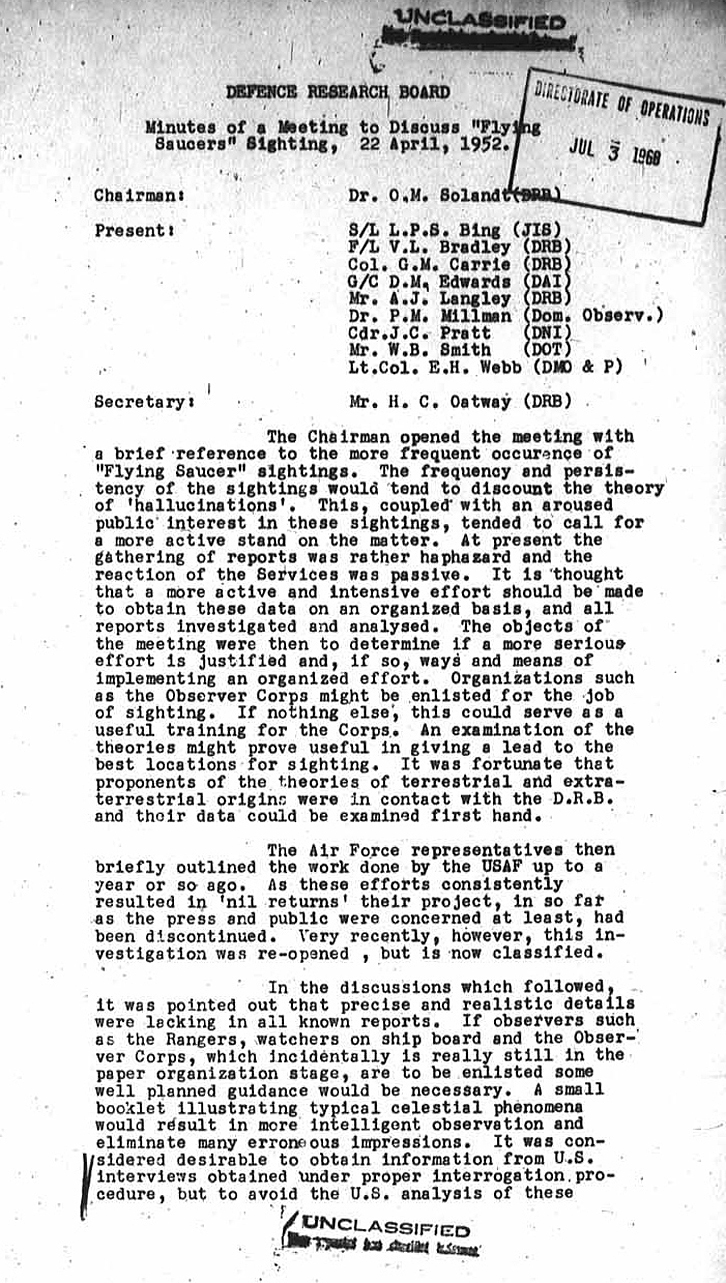 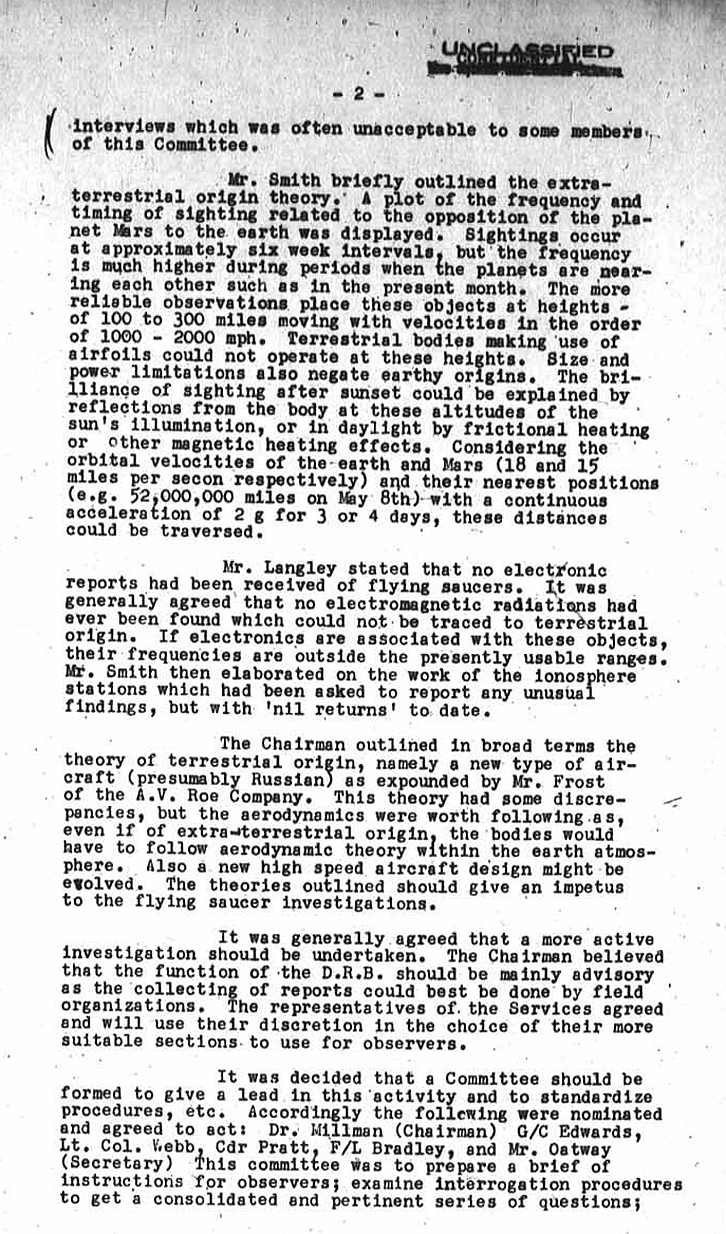 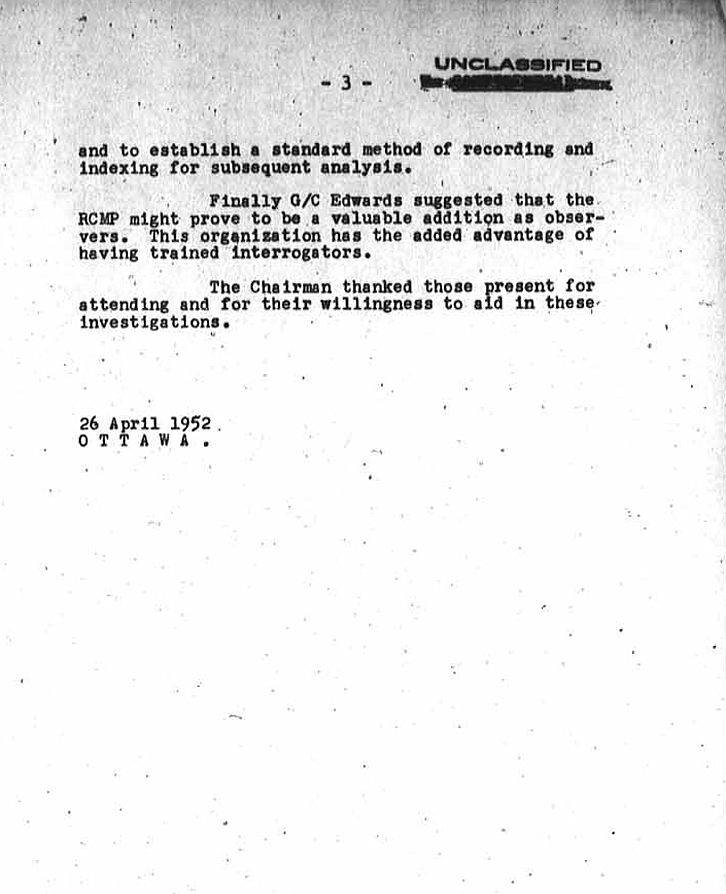 source and link to minutes of the next meeting

Thank you. Do you know what year that crash was?

Hey thanks! I've only read bits and pieces here and there before this. I guess it's obvious that I'm a fence sitter when it comes to UFOs, huh?

After the Roswell incident... also it is believed that an alien survived,the others went to get him but we started to have a deal with them.I think that is why we evolved so fast in last decades....

We and you and even I realise that as we go further in knowledge we know a little about this world...

Most people have no idea of the impact UFO sighting reports made to western society in the olden days. They've even less idea of how the reports made militaries and Intel squirm in their seats. Today we live in an age where people dismiss reports as BS and try to frame the early days of UFO sightings as one big panic being overseen by a culture that was on the wrong side of the IQ bell-curve.

Instead, the reality was European and North American militaries investigating what they suspected were incursions by unknown technologies from either here or the old Soviets. It didn't take long to realise that the Russians weren't able to fly around in anything remotely similar to glowing spheres or structured disc-shaped objects. Before relegating the reports to 'no defense significance,' it was reasonable to conjecture that these 'who-knows-what' were maybe from Mars or somewhere else.

The WB Smith in that report is Wilbert Brockhouse Smith and it's anyone's guess how he generated the statistics in there. 300 miles high?

posted on Aug, 9 2014 @ 08:15 AM
link
If you were to map out on a grid the ebbs and flows of UFO reporting compared to increased military activity and secrecy I'd bet those parallels are striking.

Thanks for sharing. I'm getting ready to step out for a bit but Ill look in to this more thoroughly soon.

Oh wow! What a perfect link you provided as follow-up! I urge everyone who reads this thread to click on it as it will give a picture in situ of the times, attitudes and the discussions taking place. (sorry, I am struggling for words this morning as I haven't yet had my second cup)

He strongly believed in UFOs, and as his son states in the link provided, he claimed to have seen a ship and two bodies of ETs outside Washington. The discussion on the military developments as well as the lights and corona attributable to the discs was quite interesting, but I had to stop there for the moment. I have to go out for a while but will return later to read some more and try to digest it all.

Nicely written post and thank you for the effort put into it. It's refreshing to see some real content rather than a few words, and a Youtube video or a link. So duly starred and flagged.

The time this document was produced was definitely a time of 'paranoia' about what Flying Saucers were and where they came from amongst world governments.

Here in the UK, Churchill asked serious questions about the saucers and allegedly ordered a cover-up. More details are in my post about that here : Prime Ministers, Politicians and UFOs in Britain. At the time The Flying Saucer Working Party, a secret UK project group, also liaised with the CIA to debunk stories of ufos and even prevent stories reaching the media.


As regards Foo Fighters. There are a number of theories on what the aircrews of both the Allies and Axis powers were reporting.

Some suggest it was the by-product of radar used:

The timing is also significant, as they seem to have started appearing when the English/Germans deployed radar, and it is quite likely that they were caused by the interaction between German systems, or the combination of the German radar and the airborne H2S radars carried by allied aircraft.

Others attribute it natural phenomenon in the upper atmosphere like ball lightning etc. It was probably a number of things.

Here are some links for further reading on Foo Fighters:


I think we could say that the 'UFO age' ran concurrently with the Cold War. But it doesn't explain away every single UFO case.

posted on Aug, 9 2014 @ 05:27 PM
link
I've just returned from the long drive into Ottawa and along the way was wondering the following:

Since WWII began, I imagine that there was no special department of national intelligence except for the secrets involved around tactical moves in the Allied side of the war, but feel free to correct me if I have it wrong. What I'm getting at is to wonder just how organized and developed such departments were even in 1952 when this meeting took place.

It seems clear that Smith had the know-how of science, but no sense of discretion when it came to treating sensitive subjects. There seemed to be no rules or guidelines about disclosing sensitive documents or how to treat and classify information. (see Kandisky's link above) When he released the info and the press got a hold of the possible visit from a spacecraft, the government fired him 48 hours after, but allowed him to continue his work. That moment suggests *a possible conspiracy* to me (I know, I know, ATS, how could I?) and it is this:

What if, in an attempt to seriously deflect public attention from the new upcoming war machine that was building very very quickly thanks to the generous infusion of German scientists in Paperclip, and considering that the Korean war began in 1948-52 the military industrial complex was believably busy and occupied with growth and productivity. President Eisenhower would be warning us and talking about in his farewell speech a few years later, that Smith was supposed to take on a new role specifically to keep prying eyes away from military and space subjects. Who better to deflect attention away by focusing it on the mysterious notion of men from outer space?

What a gift that your thread also treats the same topic and during the same time frame! Thanks so much for this addition.
Aboutface cleans her reading glasses and curls up in happy expectation of what she will be doing for the next while.