The waste waters that are now out in the wild are likely to contain lead, arsenic, zinc, mercury and phosphorus

"The tailings pond is so full of chemicals. The water is green, fish floating.... It's sad,"

Sad... Very sad. I hate the things human beings are doing to this planet.

posted on Aug, 6 2014 @ 07:26 PM
link
Thank you for putting this up. We need to take a long term systemic approach to polluction issues of all kinds. People complain about the 'debt' our children will owe - but what about the life they will (or will not) lead. Priorities people.

We have a responsibility to others and to the planet just by being born.

posted on Aug, 6 2014 @ 07:31 PM
link
a reply to: trollz
If I were to commit such an atrocity against the world, I'd be executed.
I will believe corporations are humans and deserving of rights when they execute the first corporation and it's board and major stockholders for atrocities against the world.
Nothing will come of this spill, those responsible will pay a million dollar fine for every billion they made, and not have to repair the damage done...

If I were to go dump fifty gallons of sludge into a ditch, I would probably be turned in and sit in jail for a month awaiting trial.
edit on 6-8-2014 by rickymouse because: (no reason given)

posted on Aug, 6 2014 @ 07:50 PM
link
To the engineers who designed this tailings pond.. Go back to school. You are all a bunch of complete morons. To the people affected by this, you should hold this mining company 100% responsible for all your water needs. God damn BS
edit on 6-8-2014 by drz400 because: spelling

posted on Aug, 6 2014 @ 07:59 PM
link
Crazy. . . I am going to be driving through that area Saturday as I make my way up north for work. Carriboo country is soo amazingly beautiful, I would hate to see it get ruined by this dissaster. By the way this is in Quenel, British Columbia.

posted on Aug, 6 2014 @ 08:05 PM
link
To the corporate entity, getting the riches greatly outweighs any consequences that might arise. Pay offs create a lazy mind for the environmental authority.

Many corporations that produce hazardous waste are usually close to bodies of water because of their need for it. They seem to be able to convince the environmental authority that a little pollution doesn't hurt.

Possibly a big fine will be imposed for large spills that will be easily paid.

posted on Aug, 7 2014 @ 12:04 PM
link
Do the Koch brothers own this mine too?? This seems to happen regularly. Why wouldn't anyone use extreme caution around drinking water sources?? Is it because the people doing the mining aren't from around there and don't drink that water? Such selfishness these elites have with the people drinking water. This happened in my state and guess who picked up the tab? I'll give ya hint; It wasn't the mine owners. Did any of them go to jail?? hahaha nope. Did they care that people were suffering??? nope. I feel for the people there and wish them the best 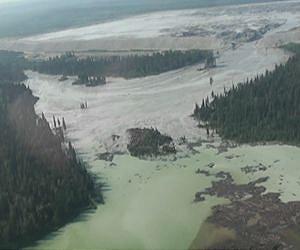 Spill estimates doubled since Monday when an earthen dam breach at the Mount Polley Mine sent waste water and mining debris from the pond into nearby pristine rivers and lakes.

posted on Aug, 7 2014 @ 12:38 PM
link
One of the largest environmental assaults in British Columbia is now unfolding and will have devastating short and long term impacts on our most valuable commodity (Salmon/fish [Sockeye more specifically]) and its inhabitants which rely on it.

The spill drains into Quesnel Lake, which drains into Quesnel River, which drains into the Fraser River. With the amount of heavy metals like mercury in the effluent, don't be surprised to see the entire Quesnel River sockeye salmon run (4mil+ fish) wiped out this year, not to mention the big resident bull trout and rainbow trout in the lake. The long term effect like bioaccumulation may extend to everything that swims in the Fraser River downstream from Quesnel. These sound like exaggerations but I guess we'll find out in the next few months.

I live in Vancouver and a lot of us sport fishermen will now wait and see how far this thing makes it towards us. The Fraser drains into the Ocean right here in Vancouver. The poor Sturgeons will probably get it the worst as they live so long and will bioaccumulate so much in their long life span, as they are bottum feeders
edit on 02014103132201420140710 by LostWoods because: source link

originally posted by: drz400
To the engineers who designed this tailings pond.. Go back to school. You are all a bunch of complete morons. To the people affected by this, you should hold this mining company 100% responsible for all your water needs. God damn BS

Its not so much the engineers as it is the management and owners. Apparently a few months ago there was a small leak. It was a warning that apparently got not heed. I will find the source later and edit. The employee wasnt named as he didnt want to lose his job.

originally posted by: DaRAGE
Why are they putting that stuff into a pond and not smelting it?

Most likely not worth the money. They are making money quicker by mining the metals and compounds they want out of the ground. Why waste money on smelting the leftovers into something when they can dump it out of the way. They dont care that spills happen. If they did it wouldnt have happened.

Because it's all a great big mixture of gravel, sand and silt. They are considered waste because they are too hard and costly to separate them so they just dump them in tailing ponds to settle.