posted on Aug, 6 2014 @ 01:47 AM
link
The Canadian North is home to some of the most rural, untouched, beautiful landscapes that can be found anywhere in the world. Not only are the mountainous regions full of wildlife and natural fresh water, but plenty of resources. Which means it is a prime location for getting raped of said resources. Whether it's precious metals, oil, or the tar sands... there is something being dug,blasted,pumped,scraped from deep underneath the earth. 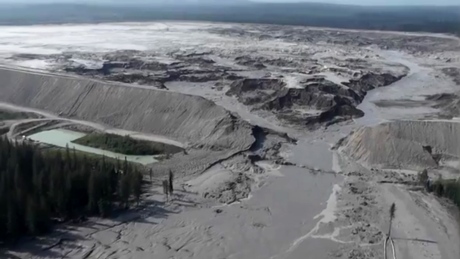 For an idea of how bad it is:

Residents and visitors to the area, close to Likely, B.C., have been issued a complete water ban, affecting close to 300 homes. It extends to the entire Quesnel and Cariboo River systems up to the Fraser River, including Quesnel Lake, Cariboo Creek, Hazeltine Creek and Polley Lake.

And if you aren't familiar with a tailings pond or what exactly it is:

Tailings are the byproducts left over from mining and extracting resources, such as extracting bitumen from the oilsands or minerals such as copper or gold from ores. Tailings include:

Tailings, also called mine dumps, culm dumps, slimes, tails, refuse, leach residue or slickens,[1] are the materials left over after the process of separating the valuable fraction from the uneconomic fraction (gangue) of an ore. Tailings are distinct from overburden, which is the waste rock or materials overlying an ore or mineral body that are displaced during mining without being processed.

The extraction of minerals from ore can be done two ways: placer mining, which uses water and gravity to extract the valuable minerals, or hard rock mining, which uses pulverization of rock, then chemicals. In the latter, the extraction of minerals from ore requires that the ore be ground into fine particles, so tailings are typically small and range from the size of a grain of sand to a few micrometres.[2] Mine tailings are usually produced from the mill in slurry form (a mixture of fine mineral particles and water).[2]

In some situations, tailings represent an external cost of mining.[3][4] This is particularly true of early mining operations which did not take adequate steps to make tailings areas environmentally safe after closure. Modern day mines, particularly in jurisdictions with well-developed mining regulations or operated by responsible mining companies, often incorporate the rehabilitation and proper closure of tailings areas in the mining costs and activities. For example, the province of Quebec, Canada, requires not only submission of closure plan before the start of mining activity, but also the deposit of a financial guarantee equal to 100% of the estimated rehabilitation costs.[5] Tailings dams are often the most significant environmental liability for a mining project.[6]

When applied to coal and oil sands mining, the term "tailings" refers specifically to fine waste suspended in water.[7]

posted on Aug, 6 2014 @ 05:17 AM
link
someday we will realize tearing apart the earth for minerals is so antiquated. today is not that day.

I'm worried that when we finally realize our errors it will be too late for terra madre
edit on 6-8-2014 by nrd101 because: reversed words terra madre

Same thing happens here. Commercial mining is terrible for the environment on so many levels - trailings as you bring up that tend to leak/spill, overall destruction of ecology in the area, risk of groundwater contamination, and as usual, no benefit for the local residents nearby.

The same thing happens in the mountains here for the Lepanto Mines. The company likes to portray itself as eco-friendly, and a good guy, while destroying the Earth at their site and wanting to expand more.

Here there are mostly private mines for individuals, which are dangerous, but at least they get the reward for their labor and are less destructive than commercial mines. Lepanto mines here are somehow still allowed to exist even though the Spanish outsiders started it. Despite many trailing pools overflowing, they are still allowed to do business and are supposed to pay a lot of money to the local surrounding communities to operate the mine, but they never pay it.

I think if companies focused more on recycling what we have extracted from the Earth, instead of continuous rape for more resources, we'd have more than enough than needed. It's just not good for some businesses

I'm sorry but that post is really ignorant as you are unaware of the extent of this disaster. I am absolutely appalled that this accident could even transpire, as concerns about the tailings pond had been previous knowledge.

Quesnel lake is the deepest Fjord (formed by glacier) lake in B.C. It's deepest point is still to be charted but sonar has found depths of 832m. The Quesnel river flows for about 14km before the Cariboo river joins at what is known as Quesnel Forks. The Quesnel river now joined by the Cariboo flows down to Quesnel and enters the Fraser. The Fraser river is essentially the artery of B.C., the majority of major rivers flow into the Fraser as it meanders it's way to the ocean.The water purity of Quesnel lake is known world wide and attracts global sport fishers and tourists. Every year Quesnel lake host one of the largest salmons spawns, particularly the sockeye. 2010 was a record sockeye run which usually re-occurs every four years. Right now millions of salmon are heading up the tributaries of this water shed and will encounter this toxic sledge. Fish and wildlife deaths have been witnessed and recorded within 24 hours of the breach. The tailings pond breached and tailings flowed into Polley lake, until the lowest spot become Hazletine creek. It then turned a 4 foot wide creek into a 150 foot wide valley filled with toxic sediment as it made it's way to Quesnel lake. Residents pull their water from the lake as prior to the incident was 99.8% pure, as good as most spring water. This stuff is so toxic that people can't even dip their feet in to cool off. From an Imperial Metals report in 2013
Mount Polley mine on-site disposal in 2013:


When Mount Polley Mines was asked about their ERP (Emergency Response Plane) or contingency plan no one had an answer. How do you not institute a plan for what would be an obvious disaster. The people were told that as of 2pm yesterday there were two tug boats putting a log boom out to stop the flow of debris from destroying the one bridge out of Likely. The other route out is a 120km dirt road through the mountains. Currently not one resident has seen or witnessed these tug boats. The people are constantly being misguided by the MOH (Ministry of Health) MOE (Ministry of Energy and Mining) and most blatantly the ceo of Imperial Metals Bryan Kynoch. The breach happened at 0115pst and EOC (Emergency Operations Center) was not contacted until 0445pst. The people of Likely were not notified until 0630pst, however most were aware of the situation from people notifying their neighbors as the rush of water was audible. The community of Likely has pulled together and those with spring water have been helping those with wells or lake water. My best Regards to those damaged by this disaster.

Just thought I would share a aerial video of the devastation filmed 08/4/2014. If you have a sharp eye the video is titled wrong with trailings suppose to be tailings. When I was four I use to think smart people worked in the government, when I was six and learned about deceit, scheming and retardation I saw the truth.

:facepalm: He was clearly being sarcastic, I don't see how anyone could miss that. I appreciate the additional info you added, though.

This makes me really mad. Canada has pristine land worthy of envy, ruining it or contaminating it is just sad.

It's not that the sarcasm was missed, just a really arrogant and ignorant time to be sarcastic. People are grieving, animals are dying, and little is being done.