In 1969, Yasser Arafat became leader of the PLO. Arafat had long been a leader in Fatah, a Palestinian organization that sought freedom from Israel while maintaining its autonomy from other Arab states. Arafat, who had fought in the 1948 war and had helped organize military raids against Israel, exerted control over both PLO military and diplomatic efforts.

Arafat long denied Israel's right to exist. However, his tenor changed, and by the late 1980s he accepted the fact of Israel's existence.

Behind closed doors the leader of the Palestine Liberation Army, Yasser Arafat and Israel's Prime Minister and Yitzhak Rabin cut a deal brokered by Bill Clinton. Norway hosted a hideaway in Oslo to allow for secret meetings to take place and no one new a thing. In fact, the deal was done for an entire year before the Palestinians were even told.

So over a course of time, a contract was drafted that would ensure IDF forces were withdrawn, economic strategies would be implemented and the right of self-government recognized.

The Oslo I Accord or Oslo I, officially called the Declaration of Principles on Interim Self-Government Arrangements[1] or short Declaration of Principles (DOP), was an attempt in 1993 to set up a framework that would lead to the resolution of the ongoing Israeli–Palestinian conflict. It was the first face-to-face agreement between the government of Israel and the Palestine Liberation Organization (PLO).

Negotiations concerning the agreement, an outgrowth of the Madrid Conference of 1991, were conducted secretly in Oslo, Norway, hosted by the Fafo institute, and completed on 20 August 1993; the Oslo Accords were subsequently officially signed at a public ceremony in Washington, D.C., on 13 September 1993[2] in the presence of PLO chairman Yasser Arafat, the then Israeli Prime Minister Yitzhak Rabin and U.S. President Bill Clinton. The documents themselves were signed by Mahmoud Abbas for the PLO, foreign Minister Shimon Peres for Israel, U.S. Secretary of State Warren Christopher for the United States and foreign minister Andrei Kozyrev for Russia.

The Accord provided for the creation of a Palestinian interim self-government, the Palestinian National Authority (PNA). The Palestinian Authority would have responsibility for the administration of the territory under its control. The Accords also called for the withdrawal of the Israel Defense Forces (IDF) from parts of the Gaza Strip and West Bank.


Immediately following the news, blow back from right wing extremists from both Israel and Palestine creating tensions and mistrust which lead to the break down of the accords. The point of this first bit is to give just a little background to help with the context of the following clip for those of you that don't know. Something I didn't know and found while digging. It turns out, that in 2001 Netanyahu was having an informal visit with what appears as relatives or close friends. During that visit a camera was on and when Bibi was asked about the 1993 accords, this is what he had to say.

In a 2001 video, Netanyahu, reportedly unaware he was being recorded, said: "They asked me before the election if I'd honor [the Oslo accords]... I said I would, but [that] I'm going to interpret the accords in such a way that would allow me to put an end to this galloping forward to the '67 borders. How did we do it? Nobody said what defined military zones were. Defined military zones are security zones; as far as I'm concerned, the entire Jordan Valley is a defined military zone. Go argue."[9][10] Netanyahu then explained how he conditioned his signing of the 1997 Hebron agreement on American consent that there be no withdrawals from "specified military locations", and insisted he be allowed to specify which areas constituted a "military location"—such as the whole of the Jordan Valley. "Why is that important? Because from that moment on I stopped the Oslo Accords", Netanyahu affirmed.[11]


But wait! It gets better. Not only did he candidly confess his plans to use a technicality loophole in the Hebron agreement, unbeknownst to him, the camera was rolling while he yammered on more 'state secrets' on how to keep the conflict going while blatantly thumbing his nose at the US, UN, and every other nation who stood in his way. I quote "The states are easily maneuvered" when asked how the world will react and call Israel the aggressors. He then says "80% support over there, it's absurd". I'll stop talking because a picture, or rather, a 3 min clip speaks a library of words. 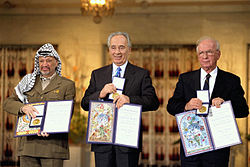 That's a picture of Arafat, Rabin and Peres receiving the Nobel Peace Prize for finally putting an end to the conflict.
edit on 31-7-2014 by FlySolo because: (no reason given)

Pretty sad eh? You see, Hamas, Fatah, it doesn't matter. He's been doing this for years and he knew signing the Hebron agreement would negate the Oslo accord.

Pretty sad eh? You see, Hamas, Fatah, it doesn't matter. He's been doing this for years and he knew signing the Hebron agreement would negate the Oslo accord.

really sad there was never any intention of peace...should be interesting to see who comes up with reasoning as why this acceptable behavior

I have a feeling it will be quiet because this is completely indefensible. Oh wait...someone will try.

posted on Aug, 1 2014 @ 02:48 AM
link
the worst thing is that this kind of information have little chance to survive "democratic free speech" filters in 99% of the media in the world.

it goes to support this information even more.

sadly, people are more interested what the world gangsters are SAYING than what are they DOING.

as a result we have this:

posted on Aug, 1 2014 @ 06:04 AM
link
Given that you experience what you create, BIB has lined up a whole series of lifetimes worth of suffering I could not possibly fathom.

originally posted by: Haxsaw
Is there still any wonder why the jews were kicked out of so many countries over the past 2000 years? I hope not, this mentality comes with psychos who call themselves the chosen race, they cry about Hitler but he just had the same superiority complex as they do.

Come on people, these freaks are the spawn of satan, if only the right wing Zionist christains would read their bible and stop supporting them, remember Christians, the muslims are not the enemy, tis the jews who tried to kill Jesus and are "anti-Christ", in fact the mulsims await Jesus' return as well, what do you think the jews would try to do to Jesus if he were on earth now? and yet the christinas donate money to the Zionist jews, and help them to kill muslims? pathetic, talk about hoodwinked, but frankly I feel ignorance is no excuse in this instance.

I wonder if they called him an anti-Semite or self hating jew too?

I understand your anger but to blame an entire people is misplaced. Even in the video there were Israelis who were uncomfortable with what he was saying and concerned about how they would look tot he world, they're human too. Also, if it wasn't for Israelis this video would likely have never seen the light of day. I'd say point your attention to where it's warranted, the man in the video and anyone who directly assisted in the inhumane slaughter of the Palestinian people.

posted on Aug, 1 2014 @ 07:43 AM
link
Who in their right mind would support BIbi ?
He is an obvious cold blooded killer, and they even killed Yitzak Rabin for supporting peace.

Seriously how can do the US or even Canada even support Zionism or Bibi ?
They're probably very scared, because when you deal with twisted people like that, you never know what can happen to you .... you know Samson option.

He needs to be charged ASAP for crimes against humanity, genocide and war crime.

Well, as I predicted, this thread is fairly quiet. I think it deserves a BUMP.

Netanyahu Bragged He Has America Wrapped Around His Finger

Great thanks! I'll give it a look.

posted on Aug, 1 2014 @ 03:30 PM
link
This video of him talking thinking he is not recorded, I have seen it like 10 times already through the years. It's the same with Sarkozy and Obama talking and saying how he is a liar and cannot be trusted.