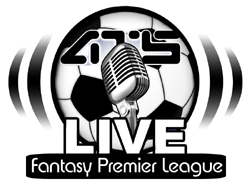 This is a Head to Head league based on the traditional Premier League scoring system, so each week teams are paired off to play against each other with 3 Points for a win and 1 Point for a draw.

You have £100 million to assemble a team of 21 players from around the Premier League.

Each week you can make one free transfer, or bank up to two weeks free transfers if you want to make a bigger change.

All the game rules are explained on the site.

Once you've assembled your team of all-stars, click on the Leagues button and then Join a League, and enter this code

And you'll be in.

Week 1 kicks off on the 16th August and you can tinker with your team right up to the morning of the first game - My team - ATS Radio All Staz - is already drawn up and in. Everyone and anyone on ATS is welcome!

The League winner will get a custom avatar, possibly some ATS Live Radio mentions and maybe some goodies, and bragging rights over next summer

Remember - this is a marathon, not a sprint....its a game of two halves.... goals win games...[insert your favourite football cliche here]

Note - make sure you choose the Fantasy Premier League 2013/14 option, NOT the Ultimate one.
edit on 31/7/14 by neformore because: (no reason given)

At last!
Yiz have heard me say it before, yiz are all playing for second place.
ive won the last two and i want the hat-trick

Good luck everyone, its gonna be a great season

Can everyone post their team name when done..
edit on 31/7/14 by SecretKnowledge because: (no reason given)

Pain in the Arsenal

Currently awaiting for Isla to be available for selection, want to see points worth, could be very good addition for QPR.

Couple of interesting transfers thus far, always a nuisance having the window end during the season.
edit on 28/8/2014 by lepracornman because: .

Nor for me. I wildcarded my team and rebuilt it. Hopefully better this time!

posted on Oct, 21 2014 @ 04:30 AM
link
Well, Diego Costa and Fabregas are clearly a must for any team, Di Maria has been outstanding points wise as well.


Definitely surprised with Southampton, looking much better than what I feel a lot anticipated this season - this coming from a pompey fan.

posted on Apr, 9 2015 @ 12:42 PM
link
Well this is a close one this season, which is great. Nothing worse then a runaway leader to bore the pants off everyone.

Good luck to everyone there's still 8 rounds left to go so plenty of points to play for.


i havnt used my wildcard yet, dont think i will either
edit on 9/4/15 by SecretKnowledge because: (no reason given)

Well done to naylya fc who is 4 points ahead with only one round to go.
So they cant be caught.


Ive been knocked off my perch

I have to change my avatar

cheers mate,was a close run thing all season. is there a ceremonial handing over of the avatar or some such?

You will have one made for you in the avatar creations thread. Neformore should be along sometime to explain to you what to do.
Although looking at your post count, i hope we get to see it at all.

Again, congratulations. Yes it was a close run thing alright. I didnt use my wildcard at all, looking back i think i should have. Well done