posted on Jul, 30 2014 @ 11:25 PM
link
Polish Archaeologists have uncovered houses in Sudan, Africa which they say exhibit an advanced stage of human behavior for the time period in which they were built.

“These were made by people still living in a very old way, so the origins of such behaviors (making houses, creating the space around us) could be much deeper than 15,000 [years],” wrote Osypinski, who is working on the site. “Affad houses were built in the times of Late Palaeolithic indeed, but the people who did it were pure Middle Palaeolithic in their adaptation strategies, [and] technological skills of stone tools production and use—this is a very important issue, as we can suppose that the idea of settled space organization could be rooted in such an old epoch.”

No conspiracy here, ATS. I just want to post something that isn't bad news.

Sudan isn't so far from the Giza plateau. And 4k years is a fairly long time.

Here's a link for the text of your article:

Here's a link for the text of your article:


Thanks! It's late here and I'm not fully awake.

posted on Jul, 30 2014 @ 11:57 PM
link
Nice find beat me to.
All this goes to show that so-called modern cognitive thinking is very old and most of what we have is only an improvement of what was done in the past

I just want to post something that isn't bad news.

Determined to get banned aren't you?

Sudan isn't so far from the Giza plateau. And 4k years is a fairly long time.

posted on Jul, 31 2014 @ 03:15 AM
link
You know after putting in some thought about this find,this seemed suggestive of a connection of settled hunter gatherers that appeared in the Levant roughly the same time actually (2000yrs later) at about 13000 yrs b.c that became the first farmers ,not saying there is a connection and not getting ahead of myself but keeping it in mind when looking at other seemingly unrelated finds.
A Younger Dryas War on the Nile
www.abovetopsecret.com...
edit on 31-7-2014 by Spider879 because: (no reason given) 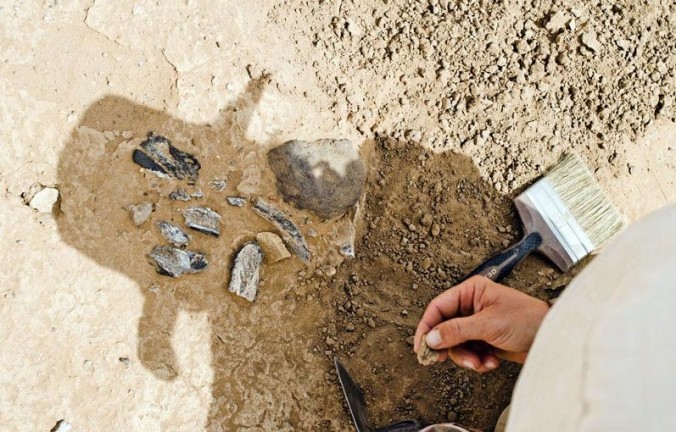 Think we need this guy on Mars, asap.

posted on Jul, 31 2014 @ 04:28 PM
link
I am pretty sure there is evidence yet to be found of much older civilized societies, in addition there are those that are already found.


A team of Israeli scientists have reported the discovery of a hominin (early human) occupation site near Nesher Ramla, Israel. The site, according to archaeologist Yossi Zaidner of the Zinman Institute of Archaeology at the University of Haifa and colleagues, presents evidence for human occupation or use during Middle Paleolithic times (about 300,000 to 40 - 50,000 years ago).

Unearthed were numerous finds that comprised an 8-meter deep sequence of "rich and well-preserved lithic [worked stone tool artifacts] and faunal assemblages [animal and early human bones], combustion features [features evidencing use or presence of fire], hundreds of manuports [natural objects moved from their original locations possibly by human agency] and ochre."* Ochre, an iron oxide pigment, was often used for a variety of purposes by prehistoric humans, including the creation of wall paintings.

Using the optically stimulated luminescence (OSL) dating technique, the researchers were able to place habitation or use of the site during the MIS (Marine Isotope Stage) 6-5, or a date range between about 190,000 and 74,000 years ago. Although the type of human was not identified as yet in their report, this time period witnessed activities of both Neanderthals and early modern humans. The lithic artifacts were of the Mousterian tradition, and included Levallois cores, flakes, points, and side-scrapers. They also discovered a "vertebral column in anatomic articulation" and "probable cutmarks observed in the field on an aurochs-sized long bone shaft fragment".* The auroch is a large, extinct type of wild cattle that inhabited Europe, Asia and North Africa.

posted on Jul, 31 2014 @ 06:41 PM
link
Those finds are surely homo sapiens neanderhal, with the moustrian tools, and such.
It has been shown that hsn divided their living spaces according to the task at hand, ie tool making, hide processing or butchering.
At this point in time hsn had two identifiable cultures, there are definative differences tool kits and other lifeways that show two distinct cultural threads, the western as represented by hsn sites in Iberia and the eastern centered in Eurasia.