666 Revealed // The Antichrist is Caliph Ibrahim

ABU ABDULLAH al-RASHID al-BAGHDADI (2007-2010) was the leader of the Mujahideen Shura Council (also translated as "Council of Freedom Fighters"), the predecessor to the current ISIS (Islamic State).

If you look at his information, this man had three names he was identified as. They were:

He was killed (or was he?..) in 2010 by a joint operation of American and Iraqi forces. Previously, when he had been captured in Baghdad, there had been speculation to who this man really was or wasn't. Here is the snippet:

Now let's compare the CURRENT CALIPH OF THE ISLAMIC STATE

So after the death of Abu Abdullah al-Rashid (above), ABU BAKR al-Baghdadi suddenly reappears on the scene as the leader of ISIS (The Islamic State)

If you compare the time line, the name, and the photos of both of these men.. you can see they chronologically match up perfectly.

This is where the Bible prophecy in Revelation comes into play.

Revelation 13:3-4 "One of the heads of the beast seemed to have had a fatal wound, but the fatal wound had been healed. The whole world was filled with wonder and followed the beast. People worshiped the dragon because he had given authority to the beast, and they also worshiped the beast and asked, “Who is like the beast? Who can wage war against it?”'


Could ABU ABDULLAH al-RASHID al-BAGHDADI have suffered the fatal wound in which he died in 2010, but miraculously was healed with Satan's power.. astonishing the inner Muslim world? Is that the reason the terrorists and jihadists have made such huge strides especially within the past year? And that they believe the current Caliph of the Islamic State is truly Allah and believe their time for jihad has finally come?

This is just a short piece I put together with a few articles. I'm sure there's much more to be discovered but I wanted to get this off my chest and see what others think.

originally posted by: Meldionne1
Interesting...and isn't the end of the world suppose to start in Mesopotamia ?


originally posted by: Meldionne1
Interesting...and isn't the end of the world suppose to start in Mesopotamia ?

I meant according to the bible.....

Democracy, Secular are both Antichrist.... ISIS are also Antichrist and were helped along by people in bed with or from Secular nations. Though I agree to a certain extent, Al-Baghdadi is not the Antichrist. There are people around the world with much more power than Al-Baghdadi will ever have. He would have to conquer all of them also.

The Antichrist isn't going to just establish a fraud Islamic Caliphate in the Middle East, the Antichrist is going to take over the entire world and rule it from Jerusalem. Can you see ISIS taking over Jerusalem? I can't.
edit on 30-7-2014 by DarknStormy because: (no reason given)

originally posted by: ApokalypsisRising
I feel he hasn't even begun in what is planned for the upcoming tribulations.

If you want to understand who the Antichrist could be, go study the Rothschilds. Though Israel seems to be run by a Secular political system, the Rothschilds are actually the owners of that country. Follow the money. They have had their hand in every major war we know about all the way back to Napoleon.

originally posted by: ApokalypsisRising
Could ABU ABDULLAH al-RASHID al-BAGHDADI have suffered the fatal wound in which he died in 2010, but miraculously was healed with Satan's power.. astonishing the inner Muslim world? Is that the reason the terrorists and jihadists have made such huge strides especially within the past year? And that they believe the current Caliph of the Islamic State is truly Allah and believe their time for jihad has finally come?

I would say that it's more likely that Abu Bakr al-Baghdadi (now known as Caliph Ibrahim) has a habit of using, and regularly changing, pseudonyms. He has every reason to do so too, considering his...er...line of work...

I'm not sure if Abu Bakr al-Baghdadi is the same individual as Abu Abdullah al-Rashid al-Baghdadi; but if they are one in the same, i'm willing to say that all he done was change pseudonyms and order his group to 'confirm' the death of Abu Abdullah al-Rashid al-Baghdadi, thereby keeping in line with governmental accounts (while allowing him to take on a new persona).
edit on 31-7-2014 by daaskapital because: (no reason given)

Or maybe there's supposed to be 3 anti-christs to do the job. The last one is obviously the one who finnishes it


and my position is that al-Baghdadi/ Caliph Ibrahim is in actuality only the First White Horse and Rider
of the prophecy: 4 Horsemen of the Apocalypse

you can read my postings, more than 16, which deal with the evidence of just why this blood-moon tetrad corresponds to the End-Times 4 Horsemen of the Apocalypse cycle... (the Final 4 horsemen of Revelations fame and not the various cycles of 4 horsemen that rode forth throughout history)


I suggest this 1st Caliph is just the start of the process, the Caliphate will grow to include Lebanon & Hezbollah, also Gaza & Hamas, possibly parts of Jorden, maybe aligned with Turkey where a replacement Caliph will replace Ibrahim/Baghdadi

... but al-Baghdadi will likely remain the Caliph until (at least) the 4th bold-moon in Sept 2015 & grow the Caliphate the whole time...

maybe the (Nostradamus ) 3rd AC aka: Mabus will be the 3rd Caliph of a combined Turkish led Caliphate and the Iranian (Persian) Caliphate ~which could come into existence by year 2020 or 2021

ISIS is 'code'...perhaps for the harlot upon the beast-dragon
the Caliph & Caliphate ...I am convinced is the White Horse & rider who went forth to Conquer/& in Conquest, that is the stage of the ISIS/IS Caliphate at this August 2014 date

see my signature below....the 8 Oct '14, blood moon will release the 2nd Red Horse & rider...known as 'War' ...
and explained in my other thread posts will have up to 75 days for war to break out , likely before 22 Dec this year
I reckon that event happening will help to validate this theory of mine that this is the end-time 4 horsemen prediction which begins the eschatology clock for the tribulation & eventual Great Tribulation 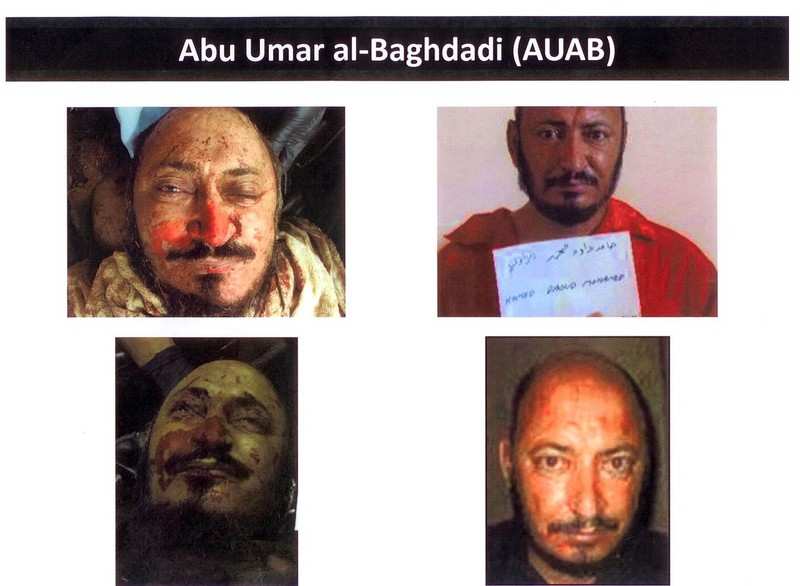 It took a while to find a labeled picture because when you Google either name you get image results for both guys.

More like, wasn't the world supposed to end every year before this one and including this one?

originally posted by: Bilk22
Pics are not of the same guy - not even ten years apart.


Any reasons or more information besides 'Nope. Not him.'

I thought this at first, but the only drastic difference I can see (that couldn't be attributed to 10 years of aging) is the difference in his beard, specifically directly between his lower lip and chin. The younger picture the hair there is sparse, in the '10 years later' pic the hair is very full and thick. Also the older picture the eyebrows seem fuller and longer, but that could be from aging, or simply because of perspective/resolution of the photos.

My beard has grown patchy my whole life, and the patchiness hasn't really gone away lol...I guess that's what I'm basing my assumption on.

Also, as many pther posters have mentioned...hasn't the world been about to end for some reason or another for decades?
edit on 7/31/2014 by ChaosComplex because: (no reason given)

originally posted by: EA006
a reply to: ApokalypsisRising

It's like in the 'Harry Potter' series where Valdemort hears about the prophecy concerning his death and finds out that the "Dark Lord shall mark him ..." There were two boys that fit all the criteria for prophecy, but Voldemort was the one who marked which of the two would be the final fulfilling character by attacking that child in his crib.

This is the same. You can say you're trying to counterfeit prophecy all you want, but you may actually be just making it come to pass. How do you know if that wasn't the plan all along? You never know with prophecy until it's too late and events you thought in your control aren't actually.

That happened to me once. I had a vision of a series of events happening... the end of that was not an outcome I wanted, or thought should be that way... so I thought that I had the vision for a reason, to stop it from happening.

So, I set out with that goal in mind, to stop everything I saw happen, from actually happening.

Yet, every single thing I did, one thing after the other, that had the intention of stopping it, had the exact opposite effect... I actually caused it TO happen, and if I had never had the vision, or never tried to stop it, it quite possibly may never have happened.

That taught me a lot actually.

Yes, IMO, these are things to watch out for and be prepared for, but not things you can try to avert in advance. If you are fortunate, you might recognize circumstances enough to take small actions that will soften things at the time of the events in question. But in the end, His will be done.

It would have to be or else we'd do everything we could to avoid the end of the world ... Right?

Prophecy is a promise, not a prediction.

The whole point of the exercise is individual spiritual preparedness. WE as individuals must be ready in spiritual manner to deal with spiritual and other onslaughts and come out on the side of right... and in "right" there ARE absolutes.

The signs will be there in every generation, they are our reminder perhaps that someday we will be face to face with God, and our own judgment upon us.

But it is not the signs we should be seeking, but God's Face. Let our actions be those of the People of God, no matter what and no matter when... because it will come as a thief in the night - for all of us.