Wine cup of Pericles has been found

page: 1
28
log in
join
share:
punkinworks10
+2 more
posted on Jul, 30 2014 @ 05:49 PM
link
I thinks it so cool when an item related to someone famous in history turns up.,It seems that the wine cup of the Greek statesmen, Pericles has been found in a grave. They don't say if it's his grave though. 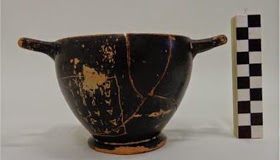 Experts are "99 per cent" sure that the cup was used by the Athenian statesman, as one of the other names listed, Ariphron, is that of Pericles' elder brother.


"Having it listed above that of Pericles makes us 99 per cent sure that these are the two brothers," he said.

Finding the cup of Pericles is cool, but finding his actual tomb would be even cooler. Thanks to Pausanias and other ancient observers, the location and identity of many of the tombs of ancient prominent Athenians is known.[ex/] 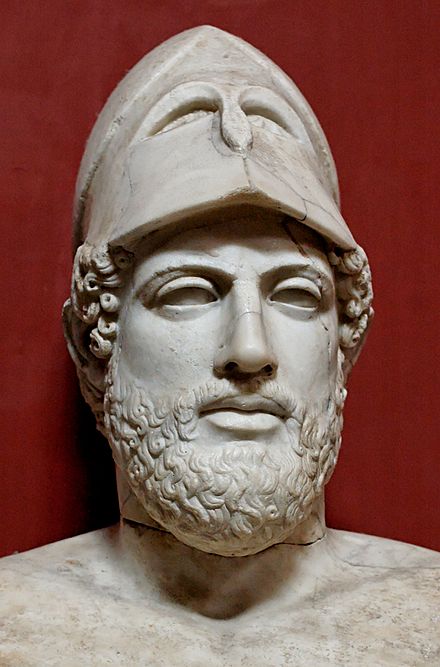 Pericles (/ˈpɛrɪkliːz/; Greek: Περικλῆς [periklɛ̂ːs], Periklēs, "surrounded by glory"; c. 495 – 429 BC) was arguably the most prominent and influential Greek statesman, orator and general of Athens during the Golden Age— specifically the time between the Persian and Peloponnesian wars. He was descended, through his mother, from the powerful and historically influential Alcmaeonid family.


Pericles had such a profound influence on Athenian society that Thucydides, a contemporary historian, acclaimed him as "the first citizen of Athens".[1] Pericles turned the Delian League into an Athenian empire, and led his countrymen during the first two years of the Peloponnesian War. The period during which he led Athens, roughly from 461 to 429 BC, is sometimes known as the "Age of Pericles", though the period thus denoted can include times as early as the Persian Wars, or as late as the next century.[ex/]

great find. but obviously pericles knew nothing about how to drink wine if that was his cup.

then again...i typically drink from a red solo cup at home.

posted on Jul, 30 2014 @ 07:57 PM
link
Now if they could only find that pesky hiding place where Plato said Atlantis is, we'd have ourselves a party!

It sucks that Pericles lost two of his sons to the plague.

great find. but obviously pericles knew nothing about how to drink wine if that was his cup.

then again...i typically drink from a red solo cup at home.

To OP - S&F for a good find! I love this stuff. I always wonder if we live another millennium on this planet if we will then have found all of history's secrets. Or if we will still just be scratching the surface...

posted on Jul, 31 2014 @ 07:46 AM
link
I have theories on such publicised finds being placed in the public's consciousness.

Certain important 'finds' are publicised and 'available' in accordance to either a deliberate message agenda or that of the unseen 'supernatural' variety, either way, as messages to those initiated in such 'esoteric mysteries'.

To me, the significance of Pericles brings to mind Shakespeare's 'Pericles Prince of Tyre' and is a message about war, specifically, war over someone or something and this is all too relevant in the global agenda of now, which brings to mind Crimea, the Pearl of the Black Sea and the land of the Biblical Gomer from whence it is believed the Ashkenaz, German, French, UK and others originated.

Importantly also is the consideration of the Runic interpretation of Tyr, the 17th rune connected to war.

Consider also Tyre as shackling Fenrir the Wolf until Ragnarok. Consider the allegory of the wolf.

Gomer [Gō'mûr]—completion or heat. The first born of Japheth and father of Ashkenaz, Riphath, and Togarmah. Also the head of many families (Gen. 10:2, 3; 1 Chron. 1:5, 6; Ezek. 38:6). The eldest son of Japheth is the father of the ancient Cimmerians or as the Assyrians called them, Gimirra, who settled on the northern shores of the Baltic Sea. The modern and familiar name in English history, Crimea, and the Cimbri of old times are derived from the Cimmerians, the immediate descendants of Gomer. Their original home appears to have been north of the Euxine, but by the seventh century they had completely conquered Cappadocia and settled there.

The Gauls and Celts of ancient times, and of more modern date, the Germans, French and British are descendants of Gomer. In the Talmud, Gomer is spoken of as Germani, that is, Germany. Germany was first called “The Land of Gomer” or Gomerland, and many old maps bear the name of Ashkenaz, one of the sons of Gomer. Other maps carry the name Gomer.

Who art thou, Lord Tyr?
Sky God
War God
Tyr
Tiw
Tiwaz
Teiva
Ziu
Zio
Husband of Isis?
God of the Lefthand Path
He who giveth his right hand for the salvation of the world

Sword, shield and horn marked with Tyr rune in the ancient way of the warrior"Tyr is considered one of the oldest of the Gods. His name can be traced back to the original Indo-European Sky Father Dyevs, the Shining One. He has been associated with Dyaus, Zeus and Jove. It’s believed he once held the top position among the ancient pantheon..." - excerpt from www.balderrising.org...

Much later Tyr was relegated to a minor role with Odin taking top position. Lord Tyr actually pre-dates Odin and was the original All-Father of Gods and Men. His symbol was the spear, (a symbol now use by Odin) the Rune named for Tyr is the shape of a spear. He was one of the gods who had a day of the week set aside to honor him. Tuesday -- Tiw's-Day is that day.

Oldest European God, his name has been found inscribed (in Runes) on swords, shields and helmets, the most ancient of which is the Negau helmet found in Austria near the Yugoslav border in 1929 dating amazingly to 600 BC. The inscription is written in ancient North Italic letters which are very similar to runes. It says "Harixasti Teiva" which is usually translated as, "to the Army-Guest (host) the god Teiwaz."* Teiva and Teiwaz are spellings of Tyr. His original name was spelled and pronounced Tiw which rhymes with ewe, or the sound at the beginning of the word Tuesday. But the Scandinavians put an "R" on the end of almost every name, so his name evolved into Tyr.

The germanic languages often added -az to the end, thus the Tiwaz and Teivaz and other variant spellings. Translators sometimes spell Harixasti with a "g" as Harigasti. It means "Army-Guest" as though the wearer of the helmet invited the god Teiva into his own body (as a "guest") to lead the army and win the battle. Scholars date the inscription to somewhere between 600 BC and 200 BC.

Scholars believe that he was the original chief god, the Germanic equivalent of the Greek Zeus, who was later overtaken in popularity and therefore in authority by Odin. He was known for his courage: at one stage the gods decided to shackle the wolf Fenrir (also called Fenris wolf), but the beast broke every chain they put upon him. Eventually they had the dwarves make them a magical ribbon (called Gleipnir)... But Fenrir sensed the gods' deceit and refused to be bound with it unless one of them put his hand in the wolf's mouth. This, we are told, is how Fenrir was bound until the day of Ragnarok and how Tyr lost his hand.


Translation
The god Tiw (as in Tuesday).

Meaning
Tiw, the god of battles and legislation. Protector of warriors and mariners. Courage, compassion.

coral (fossilized)Tiwaz is named for the Norse god Tiw, after whom Tuesday is named. Tiw is the Norse equivalent of Zeus or Jupiter. He was the god of war and justice, fair law and regulation, and success through sacrifice. He was courageous, fearless, the master tactician and a consummate diplomat. He allowed a wolf to bite off his right hand in order to bind the wolf's chaotic force and thus protects warriors (both physical & spiritual), the disabled and the left-handed. Tiwaz also represents determination and male sexuality. It symbolizes new challenges and initiations into new understandings.

Personal Interpretation
There is a need for courage now, as your victory is already assured if your heart remains true. Make use of all the skill and wisdom you have acquired so far. Protect your faith, as it will be challenged. But truth, honesty and justice will always win through.

Reverse
Naiveté, shyness. You must overcome a tendency to cowardice. Loss of concentration. Beware of left-handed people.

Converse
Uncover your hidden talents of leadership. One who appears a fool is in fact courageous.

This rune could be associated with Justice because of the legislation aspect. However, man made law is truly the most superficial aspect of the Justice card. I believe Justice should, in Tarot, be viewed in a more holistic and natural way.

My choice for Tiwaz is The Emperor because he embodies man-made authority, law, structure, order, altruism, protection, defence and more. He is a warrior (like Tiw), he is courageous, diplomatic, organized and capable. If I was to pick a god to put on the emperor card, it would be Tiw as embodied in Tiwaz.

The Rune Poem: Verse XVII Tiwaz
Tiw is a certain sign - it keeps trust well,
With Aethlings, ever on course,
Over the night-fogs,
It never fails.