Colorado: Over 5,000 Lightning strikes in 15 minutes 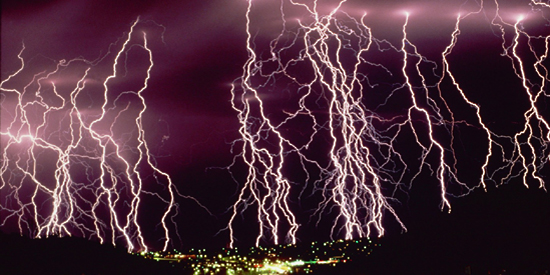 On yesterdays evening news that was how our local weatherman began his forecast.
Over 5,000 Lightning strikes in 15 minutes

The Mountains here are prone to violent summer thunderstorms and just a couple of weeks back we had two hikers killed when they were struck by Lightning.


Roy Cleveland Sullivan (February 7, 1912 – September 28, 1983) was a U.S. park ranger in Shenandoah National Park in Virginia. Between 1942 and 1977, Sullivan was hit by lightning on seven different occasions and survived all of them. For this reason, he gained a nickname "Human Lightning Conductor" or "Human Lightning Rod". Sullivan is recognized by Guinness World Records as the person struck by lightning more recorded times than any other human being.[3] He died from a self-inflicted gunshot wound at the age of 71 over an unrequited love.

But lets talk about Lightning Safety where your on foot and out in the backcountry.
30/30 Rule
Thirty seconds between the time you see the first strike and hear the thunder. If your count is less than 30 seconds you should already have taken shelter. Be that your tent, or shelter half, or whatever. I'll talk a bit more about Lightning and shelters in a bit...
The second part of the 30/30 Rule is stay in your shelter for at least 30 minutes after you hear the last roll of thunder. That's supposed to be plenty for time for the storm to pass...Yeah I think that's a bit long too, but I'm not the guy who came up with the 30/30 Rule.

Short of standing inside a Faraday Cage, there is no truly safe shelter that will protect you 100% from being hit by Lightning...
People have been struck in their cars, homes, standing under picnic shelters, in their tents and camper too.

Still there are things you can do to reduce that risk, like don't set up camp at the top of a hill, or under the tallest tree, or next to any trees regardless of height that show signs of past Lightning strikes!

Now if your in a car or camper... don't touch anything metal, the walls, door handles...Metal is a conductor so if your lucky the Lightning will travel along the outside of the car/camper and you'll be fine.

But that same rule applies to a tent!
Water is a better conductor than metal is--- so keep your fingers away from the tents shell/fabric and don't touch the poles. Some of those contain graphite and that's just enough of a conductor to make you wish you'd kept your hands in your pockets rather than try pole-dancing.

Now lets say your on foot when you see and hear that "FLASH BOOM!"
First is to get off higher ground.
Do Not Get into Dry Washes or Gullies
Esp if your in the mountains or foothills. Those are prone to flash flooding so don't go there but don't just stand on the ridgeline either.
If you are above treeline, seek shelter in the lowest area you can reach, preferably with large boulders around so you can get some protection from driving rain behind some smaller boulders.

Next is to Put on your raingear and remove your backpack even if it doesn't have a metal frame... remember what I said about water being a fantastic conductor... were trying to minimize your target area here... and while were at it, now is a good time to discard any walking sticks or poles as well. just lay them on the ground and walk at least 100 feet away from them. 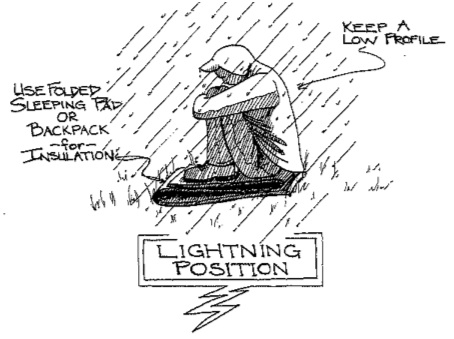 
Minimize your contact with the ground and minimize your height. Crouching down on the balls of your feet placed close together with your head tucked down is the recommended position. This position reduces your exposure and encourages any lightning strike to travel down your back and hopefully have less damage to vital organs

If your in a group don't all huddle together... have everyone spread out... this way only one person will get hit and not take out all of you with one bolt.

After the storm passes do a head count... have everyone in your party call out nice and loud... this will let you know who's okay, who's just shaken and those who didn't answer and need help.

But I will say if anyone is hit the first thing you should do is call 911, or whatever number emergency services use in your country.

Lightning often causes a heart attack. Check to see if the victim is breathing and has a heartbeat. The best place to check for a pulse is the carotid artery which is found on your neck directly below your jaw.

If the victim does not have a pulse, start cardiac compressions as well (CPR).

I will add they are probably suffering from burns as well... leave those until after you get their heart beating again, k?

assuming you get the victim back your going to want to treat for shock and do what you can to prevent hypothermia... you bet your butt people can get hypothermia from a cold mountain rain...

Well I'm going to leave it there...but feel free to add your own tips to this thread...

Thanks...
I kind of think of this as one of those subjects where Lightning is such a common occurrence, we all forget how dangerous it can be...

Count the seconds from the flash to the thunder. Each second is one mile. I've always Done this and it actually works every time.

I've used this one too, but I think its 3 seconds for 1km.

I had to Google up the answer
and it's like ---- 1 kilometer in roughly 3 seconds or 1 mile in roughly 5 seconds....they said that number changes with temperature and the humidity so i's more of a best guest than set in stone kind of deal.

I was taught to count too--- but for a different reason...

Counting from 'Flash' to 'Boom' I was taught if the numbers between--- get higher each time--- then the storm is moving away from you--- if the count gets shorter--- then it's coming towards you.

Now that I'm grown I don't count aloud anymore... but in my head I always keep track if a storm is coming or going.

posted on Aug, 11 2014 @ 10:48 AM
link
Just to give ya all and update.
Yesterday 8/10/14 ---on the evening news our local weatherman again started his forecast by announcing Sundays round of thunder storms was producing about 6 Lightning strikes per 'Second' along the Rocky Mountain chain here in the state.

More proof this is a very serious subject