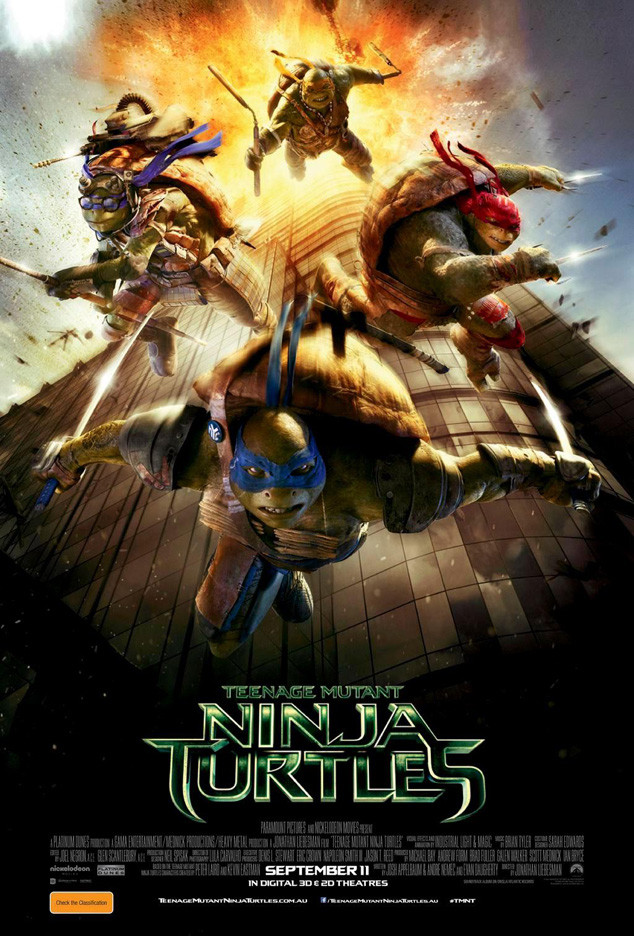 And this is why marketing teams should take a closer look at their material before sending it out into the world. Paramount Pictures Australia tweeted a photo to promote the release of Michael Bay's Teenage Mutant Ninja Turtles, an (unnecessary) reboot of the childhood classic. The poster (pictured above) they tweeted out featured the turtles falling from a burning skyscraper, and that image, combined with the Sept. 11 release date in Australia, really rubbed people the wrong way.

It is very difficult to imagine how this got past each level over at Paramount without someone at least noticing the unfortunate combination. Even if the poster was designed before TMNT got a release date in Australia, no one put two and two together?! Guess not. And now the studio is facing the angry masses.


Paramount Australia says in a statement to E! News: "We are deeply sorry to have used that artwork for the marketing materials promoting the September 11 opening in Australia. Combining that image and date was a mistake. We intended no offense and have taken immediate action to discontinue its use."

Just seen this and thought I would share it to see what members here think.... Could it have been intentional to try and garner some attention for the film or an honest mistake? I find it hard that anyone would not have twigged on to it straight away. Or do you think it was an over reaction from people on twitter?

The movie looks lame, and the only people who would like it weren't even born in 2001.

The building looks nothing like the World Trade Center.

So I guess we can never have any artwork showing any characters leaping out from a building, and God forbid that we put a release date of September 11th in another country.

This is what you get when you have a nation of knee-jerk reactionaries who don't even think twice before popping off on social media. They don't call it "TWITter" for nothing.

originally posted by: Snarl
a reply to: sosobad

Apparently people where losing their minds about it though, lots of angry messages sent. But people tend to lose it over the smallest things these days and take offense because they think they have to.
edit on 29-7-2014 by sosobad because: (no reason given)

posted on Jul, 29 2014 @ 06:25 PM
link
So is it now considered taboo to view burning buildings on September 11th? I think it is a HUGE over reaction by a huge group of very ignorant people.

posted on Jul, 29 2014 @ 06:26 PM
link
I would say it was intentional. A very wise professor told me once, "Nothing in an advertisement is an accident. If it is there, you are meant to perceive it." These marketing teams spend hours upon hours on the advertisements. There is no way in hell somebody from that team did not make the connection before the public. Just my opinion of course.

I bet it was simply a ploy to garner attention to the film. They are not sorry. If anything should be removed from the upcoming film. It should be the turtles themselves. Have you seen a trailer? Jesus Christ. Talk about nightmares. Those turtles do not look like heroes that look like literal mutant evil freaks out nature. Seriously - they tried to make them look so humanoid it is downright disturbing lol. Just my two cents.

That being said. People are without a doubt over reacting. But companies know very well how the feeble minded public loves to overreact to things such as this. What morons - to raise a stink about such a silly thing.
edit on 29-7-2014 by lightedhype because: (no reason given)


originally posted by: Snarl
a reply to: sosobad

Apparently people where losing their minds about it though, lots of angry messages sent. But people tend to lose it over the smallest things these days and take offense because they think they have to.


You know what? I didn't see the caption "September 11" at the bottom of the poster 'til I took a second look.

Yeah ... I could see where some folks might be peeved about it.

posted on Jul, 29 2014 @ 06:30 PM
link
On one hand I personally think that it is just an unfortunate coincidence with the release date being the 11th September....

If the writing on the poster hadn't been in white lettering that made the date stand out I don't think that people would have even really noticed too much...

But on the other hand and from the consumerism point of view, this type of marketing will get the movie poster noticed and kick up a bit of a stink. As we all know bad publicity is good publicity in this day and age......

originally posted by: Sremmos80
You would swear this is happening in New york, but down under?
Didn't know they cared about 9/11 so much.


That was another reason for posting it, they have really seemed to have taken it to heart down there.
edit on 29-7-2014 by sosobad because: (no reason given)

posted on Jul, 29 2014 @ 06:51 PM
link
I don't get why people are complaining, considering the poster was used as an advertorial to promote the product in Australia...

Maybe the poster was shared, resulting in Americans being offended after seeing it? Lol.

posted on Jul, 29 2014 @ 06:58 PM
link
In all seriousness though, i think people need to grow up and learn to not get offended by the slightest of things.

The building Doesn't even resemble the towers. Also...They're TURTLES!...Not people.

But show what they want in any movie about IRAQ, AFGHANISTAN, LIBYA, WW1, WW2, etc... or wherever and it's ok because it's not America.

Make a comedy about N. Korea and all is good...because...

posted on Jul, 29 2014 @ 07:03 PM
link
Probably clever marketing to get ppl talking about the film with immunity to criticism since it's also quite possible it's just butthurt interpretation.

*Lets also just post it in Australia just to be on the safe side, it will get around on the net anyway*

posted on Jul, 29 2014 @ 07:15 PM
link
Well that was an effective marketing strategy, it has everyone talking about the new movie. Of course the poster and release date was with a purpose, it is aimed at the parents. I hate when advertising and marketing try to tap in to our psyche by using crap such as this, what a cheap shot. It's how they like to roll you know, there is no way that the poster concept and release date was authorized without any foresight.
9/11 was an attack on the free world not only the US, all good people were affected.

originally posted by: abe froman
a reply to: jude11
Make a movie about N.Korea and it's all good because...


And there it is.

Thanks for proving my point.

It's so silly they should just pull the whole movie & not release it. Why ruin TMNT anyways?

Getting upset over movie posters cuz 9/11?

Getting upset over empirical truth regarding what happened that day?