n July 2010, amid the gargantuan rebuilding effort at the site of the World Trade Center in Lower Manhattan, construction workers halted the backhoes when they uncovered something unexpected just south of where the Twin Towers once stood.

Interesting all the information since it was found.


At 22 feet (6.7 meters) below today's street level, in a pit that would become an underground security and parking complex, excavators found the mangled skeleton of a long-forgotten wooden ship.

The whole thing is a bad joke. Very bad. Lethal.

Going from memory half the WTC site was river in pre-colonial times. It was filled in with old ships, rotten cargos, ballast, piers, trash, dirt removed while digging foundations for other buildings etc. That's why they had to build the concrete 'bathtub', otherwise it would all have caved in and brought down the surrounding buildings.

posted on Jul, 29 2014 @ 01:21 PM
link
a reply to: nighthawk1954
I don't mean to sound rude about your thread. The bit about the ship is interesting. It's just the bit about finding it that gets my goat. It's like saying "Hey! The sun came up this morning! I wasn't expecting that!" All this 'unexpected' stuff is just the mainstream media desperate to sell a bit more of their meaningless waffle.

I haven't heard about this before.
Maybe because I'm Canadian and don't follow American news that much.
Nevertheless I found it interesting, and learned a little more about that place's history.

Image from the article: 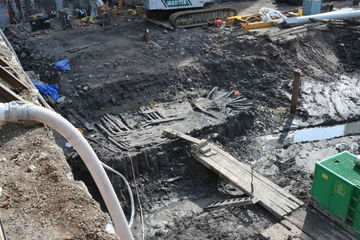 originally posted by: Rainbowresidue
I haven't heard about this before.
Maybe because I'm Canadian and don't follow American news that much.
Nevertheless I found it interesting, and learned a little more about that place's history.

Don't feel bad. It is an interesting story and most New Yorkers don't even know that a good portion of lower Manhattan was claimed from the Hudson.

You can even view the addition of Battery Park City on historicaerials.com by toggling back and forth between different years.

posted on Jul, 29 2014 @ 04:10 PM
link
I remember reading this at the time and I live in England so it was quite a widespread story when they dig tunnels in London they find bits of roman ships which are 1500 years older than the world trade center ship.