Gaza's ONLY power plant shut down by Israeli shelling

Over a million people in Gaza could be without electricity after Israeli tank shells hit the fuel depot of the enclave’s only power station, causing it to shut down. Its director, Mohammed al-Sharif, said, "The power plant is finished.”


So what else does have to happen for somebody to do something?? The hospitals maybe have a few generators that last only so long.. And then what??

Genocide to be completed soon..

NeverMind2013
+3 more
posted on Jul, 29 2014 @ 07:14 AM
link
This has to be the final straw, the world cannot, cannot sit on their collective hands and say "Israel has the right to defend themselves. This is not Defense, this is OUTRIGHT SLAUGHTER. The Homemade Bottle Rockets is more of an act of Defiance than and act of War.
This is JUST SICK!!!

originally posted by: strongfp
a reply to: NeverMind2013


What does the power plant that the civilians depend on have anything to do with Hamas?
edit on 29-7-2014 by Hellas because: (no reason given)

They live with one another. If people didn't like what Hamas was doing then they should have ousted them long ago. Obviously the reason to all this goes much deeper than what we actually know.

So it now appears that all exit/entries and tunnels are blocked and power is potentially disabled long term for Gaza residents. Nothing in, nothing out.

This appears to be a typical disproportionate strike with the purpose of achieving collective punishment - with services and utilities disrupted, it does not take long for ship to go down.

In my opinion, this will likely continue, even escalate, until Hamas and/or the greater Palestinian population capitulates........no amount of global protests, UN resolutions and regional saber rattling will change the zionist warpigs agenda.
terms and conditions apply to surrender

Some of those "Bottle Rockets" carry a warhead in the 170 kilo range. Most of what they fire are the cheap rockets with a few pounds of high explosive for a warhead, but their two top end models right now have the range and weight on explosive to do major damage on each shot.

They seem determined to keep firing the cheap garbage to run Israel's Iron Dome dry on the very expensive interceptor missiles while they hoard the high power weapons they have in Gaza. When or if the Iron Dome fails or they find an area not well covered? The slaughter of Jews will resume from where it was before Iron Dome and the West Bank wall were constructed.

I'm sorry for their power plant, but this is a two sided fight as Hamas continues firing on Israel, cease fire or not, right through the time we are talking about it now. Remove Hamas and things like this won't happen. The West Bank isn't having power plants and housing obliterated and they are just as Palestinian as those in the West Bank.

They just aren't led by terrorists. So they have power.

Hamas has fired rockets into Israel even during some of the cease fires.. they launch barrages of them.. yes Israel's missile defense system stops the majority of them but some still do land near populated areas... Israel doesn't have to sit back and just let them keep lobbing explosives.. they do have the right to fight back, or at least try to wipe out the launch sites to minimize the incoming rocket fire.

The problem is that Hamas puts these launch sites in populated areas intentionally .. using the population as human shields which has two purposes..

1. It is meant to deter Israel from firing back at those locations, which largely worked in the past.
2. It is meant to make Israel look like monsters when they DO fire back and there are civilian casualties.

Israel has basically said "enough is enough" and are now firing back at those sites regardless..and I'm sure Hamas is loving the result because it's causing alot of public attention to the civilian death toll.

Israel is almost always under attack from Hamas.. even if they are weak rockets, they shouldn't have to be under the constant threat ..

I saw an interview with someone who was on the ground in Palestine, reporter I believe.. talking about how Hamas would launch near a housing area and when the residents would try to leave ( because they KNEW Israel would fire ) .. Hamas would push them back into their homes and not let them flee.

posted on Jul, 29 2014 @ 09:10 AM
link
And the world will continue sitting on its thumbs watching the slaughter continue from the comfort of their living rooms.

Israel will finish its genocide and move on to the next group on its list.

With generator fuel being limited at hospitals even more will die as life support equipment fails and doing surgery gets even more difficult ..

When the mainstream media was the only source of information about the Palestine conflict, I think public opinion was much more supportive of israel.

But with the internet and access to information, seems like public opinion has shifted away from israel. There seems to be a lot more empathy for the Palestinians, well, from the people anyway. Governments, not so much.

You'll notice that the date on the image below is from 2009 yet its no less relevant today. 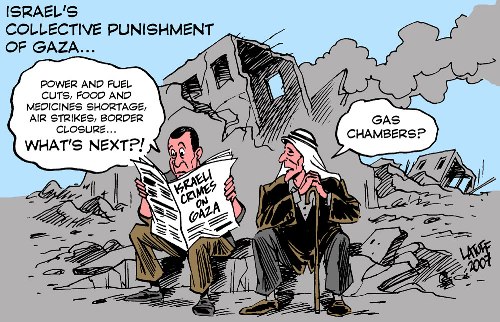 It won't take long for the dead to start to rot on the streets and diseases to spread around like wildfire.

Gaza is already a miserable hell hole that humans can't leave, hard to make it worse yet, some how, Israel has just achieved that.

This is pathetic. And yet the justifications and arguments for this insanity will go on and on.

You know, it seems to me this argument about the rockets coming from Gaza began to fail when Bloomberg and the Mayor of Jerusalem got on CNN and insisted Israel was safe for tourism and that rockets landing near the airport were just a nuisance being handled adeptly by Iron Dome.

It can't be both "safe for tourism" and also so dangerous that they need to bomb Gaza back to the stone age.

Some pretty intense shelling going on, in the live feed I am watching. I think earlier they were showing that fuel tank burning, not quite as much as in the video shown above...but I was wondering what was burning, and making so much smoke. Had to have been it.

posted on Jul, 29 2014 @ 09:31 AM
link
I wonder what would happen if Israel offers a cease fire to Hammas...Oh, no, wait, never mind. I know what your response will be like. Never man, would you sign a peace with people who killed so many of your own? Yes, I get it, but then what do people expect? If you refuse to sign peace, then why are you shocked that stuff like this happens? Do you honestly think that Palestinas wouldn't be doing this same thing to Israel if they could? If you don't think they would, then you are seriously blinded with hatred towards Israel.

I want to know what's acceptable for people here on ATS.

Do you want to be peace there? Do you want this war to continues? How do you want peace there if you agree with Hammas on not accepting cease fire?
edit on 233k2014Tuesdayam014 by Nikola014 because: (no reason given)

posted on Jul, 29 2014 @ 09:32 AM
link
Ah I see there is a few of the but brigade trying justify this already, targeting sewage and electricity grid is not attacking Hamas, it is attacking the whole of Gaza, cannot be justified and is barbaric. How are the civilians that Israel is 'accidentally' killing and injuring supposed to get medical treatment if there is no power going to the hospitals?

The fact remains that they can't do it.

They lob rocks at Goliath and Goliath stomps them to the ground. Or starves them. Or cages them.

Enough. Both sides are illogical and need to compromise but Israel needs to allow humanitarian aid before anything else can be worked out. If Israel thinks for one minute that there will be any peace in Gaza without basic human rights and decent infrastructure/quality of life, they are mistaken.

The fact is Hamas and Israel need each other...each justifies the barbaric behavior of the other..while the people of the region suffer.

Well one of the big problems Israel faces is that Hamas has embedded itself with the Palestinians .. nothing short of Palestinians revolting against Hamas will really root them out..

Hamas puts the rockets/launch sites near civilian areas knowing full well that Israel will fire back on those targets.. the result is civilian casualties which in turn results in sympathy for Hamas.

Hamas has launched from locations near schools, medical facilities, civilian housing.. so of course when Israel takes out those sites there are civilians right there... and reports from the ground have stated that Hamas won't let civilians flee those areas.. Civilian deaths HELP Hamas because it causes the international community to put pressure on Israel .. Hamas even launches rockets during cease fires that Israel honored.

So again, short of the civilians revolting against Hamas, I don't see other ways to resolve this .. perhaps a ground invasion, but that would do more harm than good .. Israel could always just stop it's offensive and continue to allow Hamas to fire rockets at them .. but that's foolish as well... Don't forget, Israel has been pretty much under a non-stop barrage of rocket fire for a long time, they usually just let the missile defense system knock them down but that is not only NOT 100% effective, it's extremely costly.
edit on 7/29/2014 by miniatus because: (no reason given)