A Boom Operators Perspective on the KC-46A Pegasus Tanker

posted on Jul, 28 2014 @ 07:14 PM
link
One of the biggest questions I get in my messages here and other places is how do I feel about the new KC-46 tanker coming out soon. Bottom line is I think it’s a great aircraft for the mission, although I’m not crazy about the lack of a boom pod and the use of 3D cameras to perform air refueling. With depth perception so key to air refueling (number one medical requirement in testing to be a boom), I don’t see how a 3D camera can provide the same level of it as the human eye looking out the rear of a tanker.

When EADS first won the competition for KC-X I was a little upset. Not because the plane they put up was better or worse than Boeings, but because it was basically a foreign country building one of our nations most prized weapons systems. And probably because Boeing has a strong record of producing some pretty incredible air refueling tankers like the KC-135, whos life will be about 80 years old before it is retired.

For those not familiar with the whole tanker world, heres a little backround info about how the KC-X competition came about, and the future of the KC-Y and KC-Z competitions.

1990’s and Early 2000’s
Back in the 90’s, the air force decided that they finally needed a program to replace the 500 plus KC-135’s in the inventory. This became, and still is, the number one program for the air force in terms of replacing inventory. The original plan was to lease 80 KC-767s from Boeing and purchase 20 more. When the senators started complaining (John McCain) about the deal it got switched to buying 80 and leasing 20. Then the scandal came with the air force exec that secretly negotiated the deal with Boeing in order to secure a job with them after her government gig. Yeah she went to jail and the program stalled.

Eventually an RFP came out with Boeing submitting the KC-767 and EADS putting up there KC-30 aircraft. Eventually EADS won the contract, and Boeing protested the decision. The protest was upheld, and eventually the KC-X program was reborn, with a different set of requirements for the tanker, most noticeably the requirement that the tanker didn’t have to be large. This obviously put EADS at a disadvantage with their design based off of an Airbus A330, and led Boeing to resubmit their KC-46 design based off of a 767-200LRF. The new version of the 767 incorporated the -200ER fuselage, -300F wing, gear, cargo door, and floor, and the -400ER digital flightdeck and flaps. Also, the -200 Long Range Freighter has uprated engines and a sixth generation fly by wire boom, similar to that on the KC-10 (more on that later). But what I think sealed the deal for the airframe was Boeings choice to incorporate the 787 dreamliner glass cockpit into the design adding huge 15 inch screens in front of the pilots.

Pic of the cockpit

2010’s:
On 24 Feb, 2011, Boeing won the contract for development of the tanker. The contract calls for the development of four test aircraft, as well as delivery of 18 IOC aircraft by 2017. Since this is a fixed price contract, the government has little risk associated with the development of the tanker. A perfect example is something that just happened in the past week. The wiring of the jet needed to be reconfigured, ballooning the cost over the amount Boeing submitted in their bid. The result was Boeing having to fork out $272 million bucks for the redesign.

Boeing has long stated that they aren’t expecting a profit from the tanker during development phases, and planning on profits coming when the aircraft enters production. Also, EADS has accused Boeing of intentionally low balling the contract to win, something Boeing has not denied by the way. They knew that they would have to eat a bunch of cash up front in order to reap the benefits of a long production run, so this news was expected.

Lowering the Risk:
Several things in this program has gone to lowering the risk of something happening like what is happening to the Lockheed Martin F-35 JSF. First, the fixed price contract that Boeing bid on. That is the key risk reduction technique in this program. Basically, as long as it isn’t something the government is asking for on top of what Boeing has promised, they will not be liable for anything over the bid. If something happens like the wiring problem, then the government is safe from the extra cost.

Second is the way the aircraft is being built. The KC-10 is a good example of an airliner being converted into a tanker. The DC-10 was built to airline standards, then converted into a military tanker at another facility. Well this is similar to what the KC-46 is going through with some differences. The main one being that the 767-200LRF is being built keeping in mind that the air refueling equipment is going to be installed at a later time. So instead of building this long range freighter, then flying it to another airfield to be converted, taking the entire aircraft apart in order to fit in the tanker stuff, then building it back together, the 767 is being built on the assembly line with all the plumbing for the refueling systems in place, with the body fuel tanks already installed, and even the 787 cockpit and Air Refueling Operator System (AROS) already installed. This is a huge cost savings technique that seems to be working in everyone’s favor. 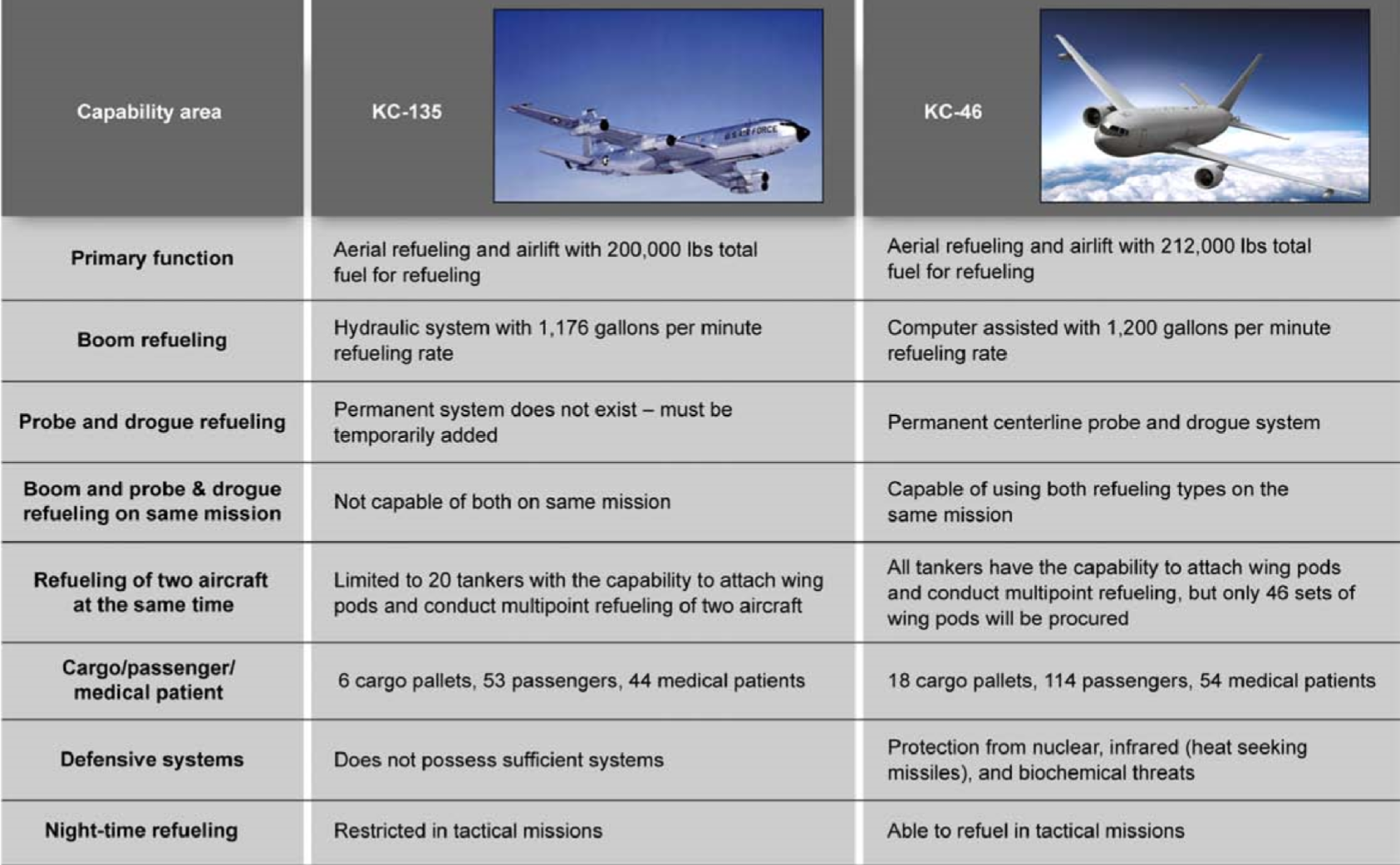 Here you can see some of the differences between the two aircraft. As far as fuel capacity, there isn’t much of a difference and for a reason. The air force wanted a replacement for the KC-135, and that’s exactly what they got: an upgraded 135 with modern fixtures. Another difference is the ability to conduct boom refueling and probe and drogue refueling in the same flight. The KC-46 will have a boom as well as a centerline drogue, similar to the KC-10, as well as the MPRS pods on the wings for simultaneous refueling with Navy and NATO aircraft.

A big improvement over the KC-135 is the KC-46’s ability to carry three times as many pallets, up to 18 total. It can carry 114 passengers, or 54 medical patients, if its put in aeromedical evac role. It also has the capability to be refueled in flight, similar to the KC-135RT’s stationed at McConnell AFB. Its rumored that the new tanker will have the ability for night vision lighting and operations for spec ops purposes as well.

But the granddaddy of them all, the reason the new tanker is 100 times better than the KC-135, is the defensive systems incorporated into the jet. For the first time in tanker history, the KC-46 is protected from nuclear EM pulses, as well as chemical and biological attacks. Also, new infrared systems protect it from heat seeking missile threats, and the cockpit has armor protecting it from small arms fire. The fuel tanks also have ballistic protection.

Reasons I don’t like the new tanker:
Number one: No boom pod. I’m sorry but I just don’t see how this can be safer than the old fashion sighting window in the back of the plane. Now the new design has the air refueling operator system actually facing the rear of the aircraft so at least they changed that. But like I was saying earlier, depth perception is key to being a boom operator and I don’t see how that can be accomplished using 3D glasses. Back in like 2006 when Boeing was touring its big KC-767 trailer, I got to fly the simulator using the 3D technology and I found it more difficult to judge how far away we were from the receiver aircraft. And actually a lot of booms said the same thing, which makes me wonder why Boeing didn’t just go with a boom pod in the back. To save money? Maybe… 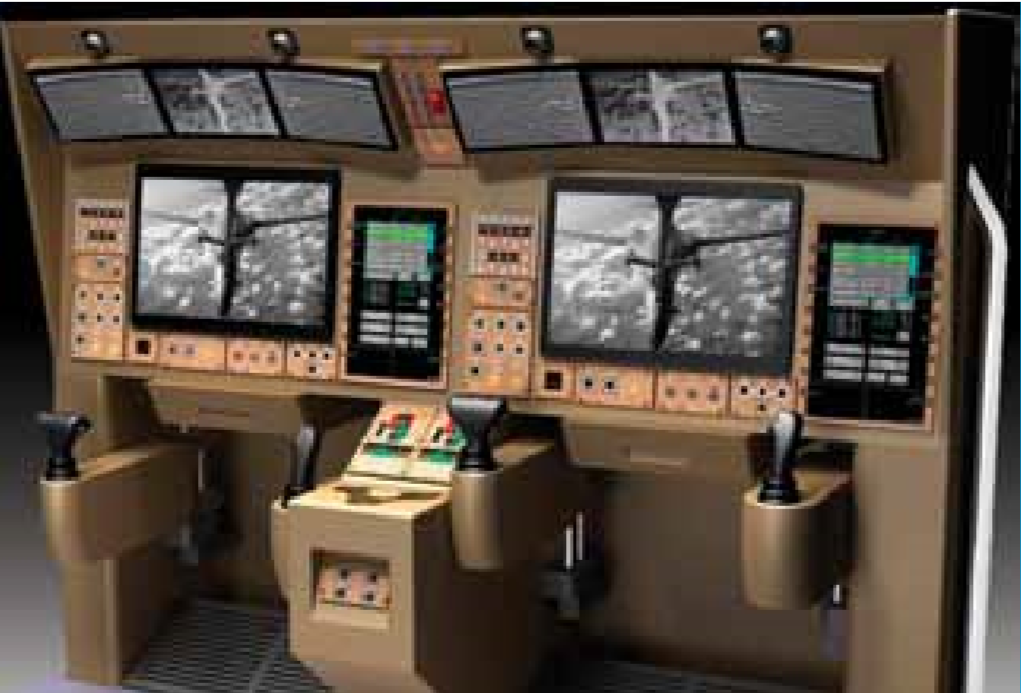 You can see here that there’s two sets of controls on every aircraft: one for the boom and one for the instructor boom. Apparently the instructor booms station will override the booms station anytime its commanded to, which is a first in air refueling history. In a KC-135, the instructor sat to the right of the boom laying in the prone position, and used his left arm and hand to assist the boom if need be. It was something that took a while to get the hang of because of using the hand your not trained to use to perform air refueling. Also, the instructor couldn’t extend and retract the boom at all. We had to rely on the boom to do the right thing when up there. 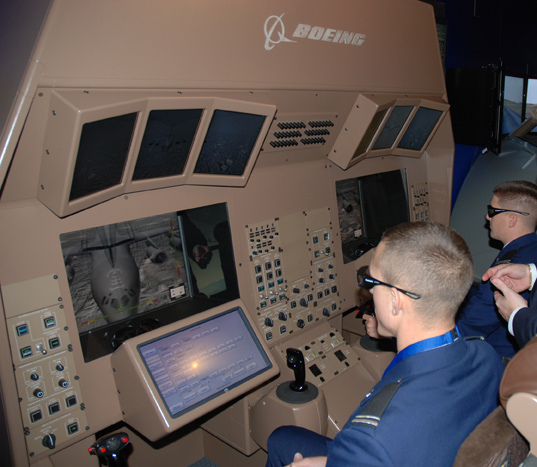 With the glasses on… 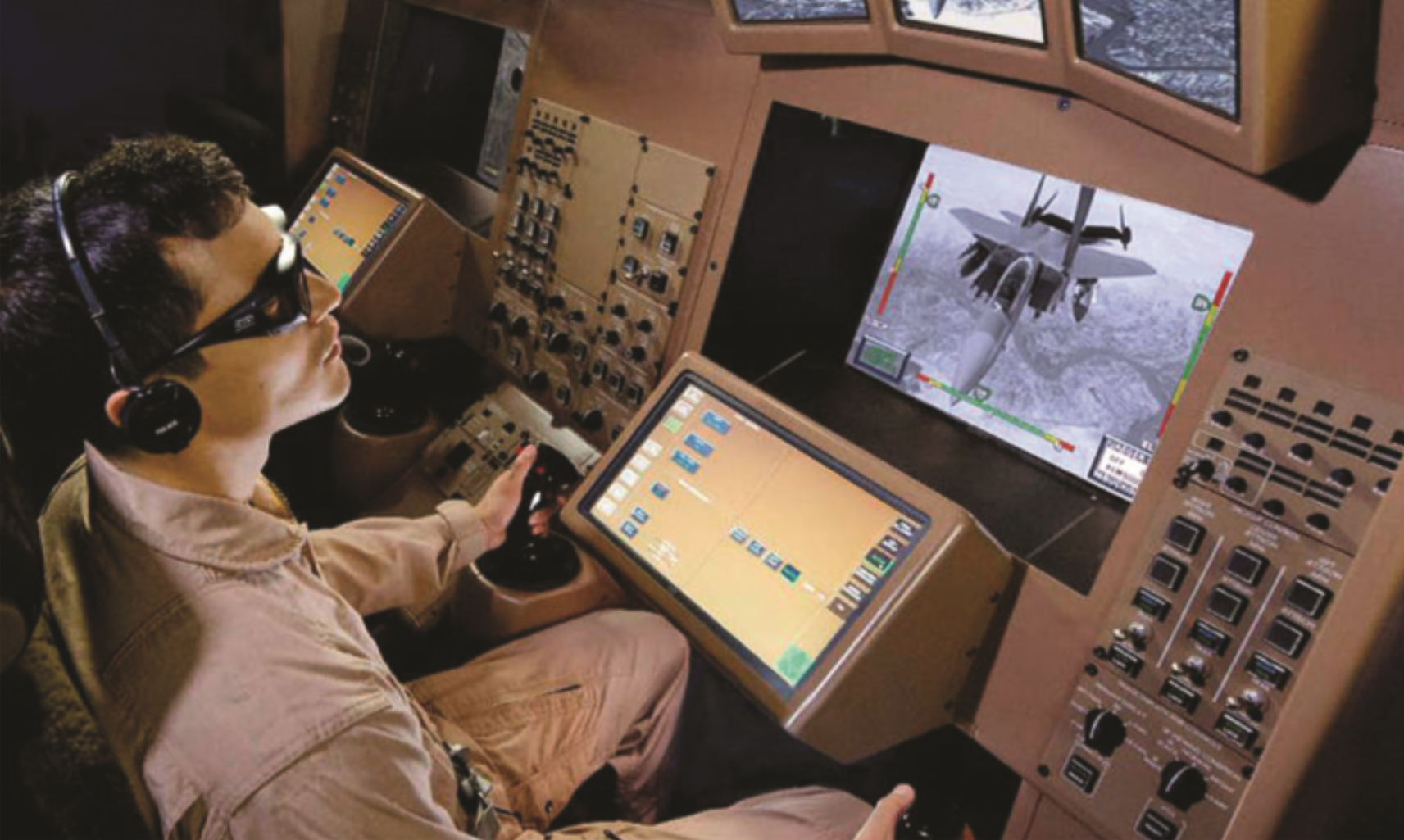 posted on Jul, 28 2014 @ 09:56 PM
link
As for concerns in the OP about the ability of 3D TV to replace direct eye contact for operating the boom, one has only to look at medical robots and industrial robots to suspect that the use of a human boom controller's job is doomed to be displaced by a machine. The 3D TV more or less is telling you that a simple computer will be able to handle that job on that new tanker sooner or later if not initially.

It's a shame they've steered away from the direct I/O, and went with the FBW and indirect monitored approach. Boo.

posted on Jul, 29 2014 @ 05:42 PM
link
3D glasses scary and foreign to us. But, not to the "kids" who will be operating this thing. Time will tell if it was the right way to go. Just hope nobody gets killed getting it right. BTW, great read and pics. Thanks!