Did you know that Jesus loves you?

posted on Jul, 28 2014 @ 12:35 AM
link
Not as much as Eris, the one true Goddess, though. I'm sure that Jesus is a lovely fellow, however, a glass of discord in the morning never hurt anyone.

Are there any Discordians 'round these here parts?

What have you done to spread discord? Just today, I gave a couple of thank-you cards to cashiers for ringing up my items who looked quite confused at the sight of them.

Mary is the pure one but the book of revelation call's the earth HER and tell's of how SHE opened her mouth to consume a flood sent out from the devil/Dragon to consume the woman so saving the woman who was given the wing's of an eagle and taken to a place the Dragon could not follow her.
And who the heck is Eris?.
The creative force order's chaos and without neither order nor chaos can exist therefore a being that gives birth can not be the begining and must be a second or third stage?.
Error's in logic lead to futile discussion's.


What have you done to spread discord? Just today, I gave a couple of thank-you cards to cashiers for ringing up my items who looked quite confused at the sight of them.

I started talking like a pirate after lunch and told strangers..."if the world can't save its self, then it ain't worth saving"

With the scot's independance referendum coming up he currently prefers the more formal Robert.

A toast to absolute infallibility!

What have you done to spread discord? Just today, I gave a couple of thank-you cards to cashiers for ringing up my items who looked quite confused at the sight of them.

And who the heck is Eris?


So it isn't just the science threads you leap into without first looking, then.

Eris was a lady who liked chucking apples about.

Ha, I trip up stairs and walk into door's as well, but seriously.

originally posted by: zackli
Not as much as Eris, the one true Goddess, though.


It would be helpful if you would post information saying exactly who Eris is supposed to be and why you say she is the 'one true Goddess'. I take it you are an Eris devotee?

Is this the Eris Goddess you are speaking of?
ERIS Information


ERIS was the goddess or spirit (daimona) of strife, discord, contention and rivalry. She was often represented specifically as the daimon of the strife of war, who haunted the battlefield and delighted in human bloodshed.

How, according to you, does Eris love us more than Jesus?

I think everyone knows who Eris is, surely? The story of the Apple of Discord, and the Judgement of Paris?

To be sure most of us are more familiar with the more popular classical tale's but the story of Paris other than that he was at the battle of troy is one many here will either have had there eye's glaze over at school or simply not have read.
You have intrigued me however and I am tempted to read up on it.

However braging a niche superiority of selective knowledge is not good form, really.

Note also you will find most school's in britain do not teach greek literature any more except for a few of the classic's and then only in passing, this is a sad truth as schooling over the past 50 year's has degraded, remember calculator's never used to be allowed in class, now they are, Student's had to learn there logarythm's and perform complex mathematical formulae but now they tend to simply enter the formulae into a scientific calculator.

English litterature used to take pride of place then came the age of Vocational education, talk about shoehorning the kid's into a class system while the rich could afford to send there little brainless brat's to Eton where the student's are told they are being educated to be the future leader's of the country, the poor with often substantially higher IQ's recieved sub standard state vocational education and qualifications to prepare them for industry and to take there place not be given the same level of excellance that the Eton crowd of Hooray harry's recieved or be showered with the benefit of the old school tie crowd and network.

Personally though I believe an engineer or a scientifically educated individual is often far more intelligent than a classical litterature book worm and indeed often catched up on that bit of education later in life when they are not solving practical problem's and have time to spare but then the business studies crowd though often the dumbest out earn both, Life is not fair.

Just looked Eris up, one of the Cthonian's or greek god's, the apple of discord was a golden apple as she was the goddess of Discord or Chaos so a bad god who sow's war and argument's so why did hade's not marry her?, Interesting story and is it not interesting the parallel between the story of genesis which may have been originally from the mesopotamian religion before being adopted or adapted into the pre Abraham story's added by later writers to fill the gap before his founding of the monotheist religion and the closeness of the ancient Greek's to that region, could both story's have a common root story behind them interpreted differently, instead of Eve the woman who caused the fall from grace, Eris is a Female Goddess who sow's chaos and ruin.
Now you have me interested thank you for that little tip.

However braging a niche superiority of selective knowledge is not good form, really.


No brag. These aren't stories you learn in school, they're in the culture and you pick them up one way or another. I didn't learn about the Judgement of Paris in school; I can't remember where I picked it up now. But surely everyone has at least seen one of the famous painting of the scene by Rubens? 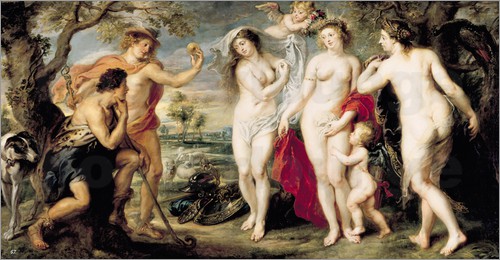 
So it isn't just the science threads you leap into without first looking, then.

At first I thought this was a reply to me, but then remembered that the only forums I post in are philosophy/metaphysics/other inherently non-scientific forums to inform the ign'ance of the threads with science and then looked at who it was actually a reply to and was mildly disappointed but amused.