Questions for You Aviation and Aerodynamics Experts

posted on Jul, 27 2014 @ 03:08 AM
link
If you could somehow Ionize the air just ahead of an aircraft's leading edge, turning into an electrically charged plasma, and then actively "guide" that plasmatic air over the surface of the craft, in fashion similar to the way a linear induction motor "guides" a Mag-Lev train car over a track, would be able to significantly reduce the drag generated by a high speed aircraft?

Would you be creating a sort of artificial laminar flow?

Or would it be more accurate to call it a plasma-boundary layer?

Could you use a series of LED lasers (similar to what might be found in a Blu-ray player) arrays along the leading edge of the craft, focused just slightly ahead of the leading edge (by just a few inches of, at most, a few feet) to generate the ionization front?

Could a carbon nanotube coating be employed, applied to the surface of the craft, to enhance the conductivity of the surface, and thus, enhance the efficiency of the plasma's flow over the coated surface?

Could you induce the plasma layer to flow across the surface at a speed higher than the velocity of the craft itself?

If such a craft were possible, I'm thinking it would likely have a "flying-wing" or blended-wing-in-body shape.

If you could do those things, have you thought of the negatives of

A Melting the wings and

B Providing an aiming point for a heat seeking missile.

Melting would not need to be a problem since the carbon nanotube coating would make a great heat insulator (See the Carbon heat-shield tiles used by the now-retired U.S. Space Shuttle. And the plasma itself would be racing over the surface of the airfoil, not staying in contact long enough to transmit significant amounts of heat to the airfoil.

Heat-seeking missiles are generally not a problem for non-military aircraft.

posted on Jul, 27 2014 @ 03:33 AM
link
This is getting into an interesting field. When you start taking about plasma and aircraft all kinds of interesting things open up.

YES!
That link was Very interesting indeed!
And much along the lines I was considering.

P.S.
Zaphod, could that "Green light in the sky" you've been seeing be related to something using Methane?

JP-7 gets you up to Speed, but methane cryo-slush what does the deed?
"To sub-orbit and Beyond!"

But here's some interesting stuff on the subject.

credit goes to Zorgon for this one : Post in thread

a reply to: pheonix358
If you could do those things, have you thought of the negatives of

isnt their a limit too how many G-forces a human body can handle thats prevents ya from going to plaid anyhow,, ya it may be fast but not very maneuverable... that must be where the drone part must be involed...
edit on 27-7-2014 by ShadowChatter because: (no reason given)

I've heard that G-forces can be reduced by having a movable seat in some cases.

The technique has been looked at in high speed trains. Like the underground high speed ones TPTB use.

Definitely, the B2 stealth bomber uses a form of plasma (amoung other things) to hide from Radar. The old way of doing it was a lot more radioactive but still worked (Green Orbs anyone?) now days it's a lot different.

I actually just went to search for the article about the old style way of producing plasma and it seems to have all but disappeared :/ hmm..

posted on Jul, 27 2014 @ 07:20 AM
link
I JUST FOUND THIS SCROLL DOWN FOR THE FULL LOWDOWN FLYING SAUCER SCHEMATICS SIMPLY AMAZING

To counter the crushing pressures of extremely deep dives, it has been suggested that divers use a super-oxygenated fluorocarbon fluid instead of gaseous mixtures: the reasoning being that fluids cannot be compressed and therefore lungs full of incompressible fluid would allow the diver to go deeper than a diver breathing compressible gases.

Could this technology be adapted for high-g applications, wherein the pilot's flight suit, and lungs, are filled, pre-flight with a pressurized, super oxygenated fluid that would act to count high-g forces?

Truthfully, I'm no physiologist, so I'm not even sure you could use pressure to counter G-forces. As I understand it, however, the danger imposed by High G-forces is that they tend to cause the pilots to black-out due to oxygen starvation when the G-force incurred exceed the body's ability to pump oxygenated blood to the brain. Inflatable bladders, and muscle-constriction techniques have been used to counter the effects of high-G 's in the past.

Would a fluid filled "pilot cocoon", in which the pressure both external to the pilot, and within the pilot's own body, are equalized, and optimized, be more effective in combatting high-G stresses?

posted on Jul, 27 2014 @ 12:41 PM
link
Plasma has an interesting side effect on aircraft. If it comes into contact with the skin, without being under very precise control, it turns everything into very very small pieces of confetti, that would fit into a single garbage bag. Makes recovery of the wreckage easier though.

I'd think it would make recovery harder. I mean, think of all that confetti cut loose at umpteen thousand feet being dispersed by prevailing winds on the way down. It would take the entire NYC post-New Year's Eve cleanup crew to get it done over a reasonable period.
edit on 27-7-2014 by Cohen the Barbarian because: (no reason given)

Oh, the actual finding would be a lot harder, because it's much smaller pieces. The actual cleanup and removal once you found it though, would be much simpler.


As I understand it, however, the danger imposed by High G-forces is that they tend to cause the pilots to black-out due to oxygen starvation when the G-force incurred exceed the body's ability to pump oxygenated blood to the brain. Inflatable bladders, and muscle-constriction techniques have been used to counter the effects of high-G 's in the past.

This is just a theory I heard and when I heard it the application was for hyper speed trains. To reduce the g-force that passengers might experience during super sonic travel.

I couldn't find the old picture which explained it much better. But this one below will work for a simple demonstration of the possible technique.

As the vehicle accelerates the seat mounted on a gyroscopic frame will tilt it's axis counteracting some of the g-force. During prolonged g-forces the seat tilts backward or forward depending on the direction needed. Placing the passengers head in the correct position for the flow of blood to the brain.

If the vehicle needs to make a sudden change of direction or deceleration the gyroscopic frame would allow the passenger to rotate 360* or perhaps even more if needed. This would theoretically reduce the g-forces that hyper speed passengers might experience. 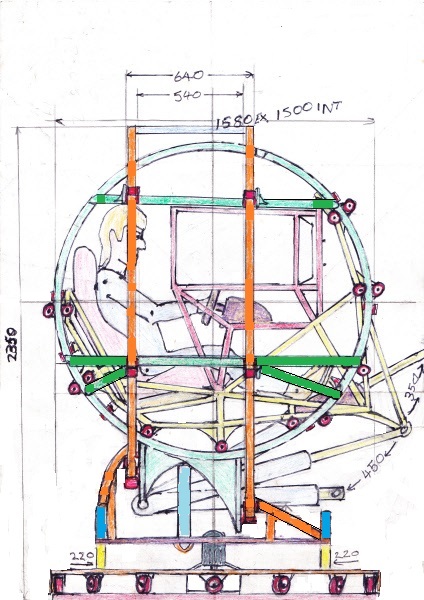 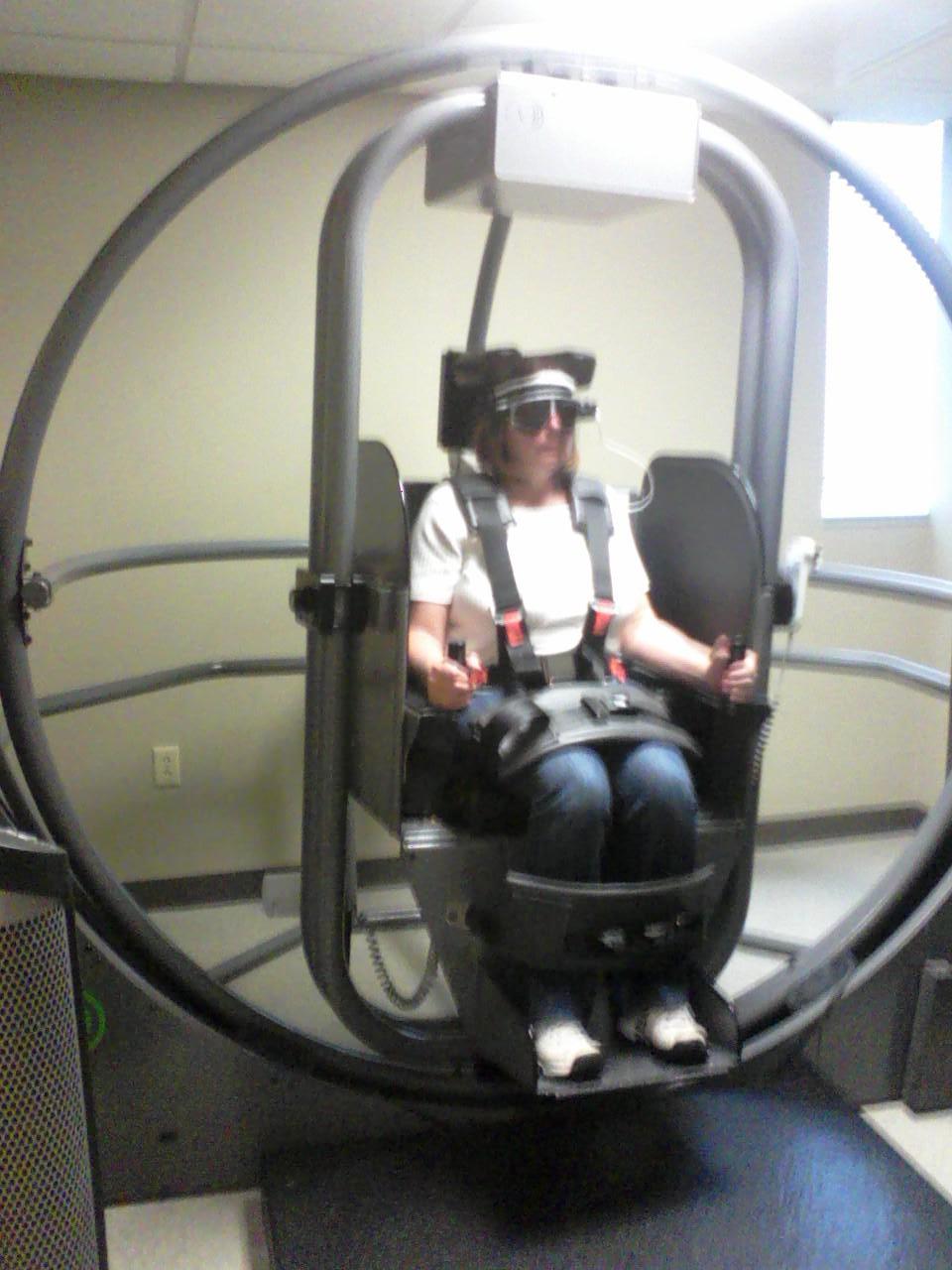 This video game SEGA R360 is a good demonstration of the concept.

Imagine a seat like this to counter act the g-forces.

originally posted by: Bhadhidar
If you could somehow Ionize the air just ahead of an aircraft's leading edge, turning into an electrically charged plasma, and then actively "guide" that plasmatic air over the surface of the craft, in fashion similar to the way a linear induction motor "guides" a Mag-Lev train car over a track, would be able to significantly reduce the drag generated by a high speed aircraft?

Yes. This science is in white world (applications are not revealed), though not using LED's, but dielectric barrier discharge plasma generators. They apply an asymmetrical high-voltage AC signal which can yield net momentum transfer to the air---get a charge separation and then attract or repel the air appropriately. The idea is that you can "move" the air past without using friction (viscocity drag) or pressure and that could have positive effects on aerodynamic performance.

Haven't seen results on very fast flows, still open experiments are much lower velocity. There are also potential effects on reducing radar return as well, but all of that would not be revealed in the open.

There are unconfirmed rumors that early stealth platforms used some nasty radioactivity in the paint to make the charged air (whether just stealth or aerodynamics isn't clear), and there was an open patent from decades back about that. Presumably not used any more as it makes the operations a real mess.

Interaction between composite surfaces and plasma (may be unpleasant) aren't discussed openly either. Maybe it's a "turn this on only in a real war" system?

I also imagine that there are significant stability & control challenges as plasma & fluid dynamics can be very complex and chaotic. May not be a smooth ride.

That's something that I've been wondering a lot about lately. If it's radioactive enough to start ionizing the air then jeeeeeeez that is one radioactive plane. And now you've got to fly a lead box around too!

Not at all. It used alpha particles which can be blocked by paper.

I'm still thinking about all the beta emitter reports I've seen. But even if it was all alphas, I wouldnt want to breathe anywhere near the plane lol.