Netanyahu Bragged He Has America Wrapped Around His Finger 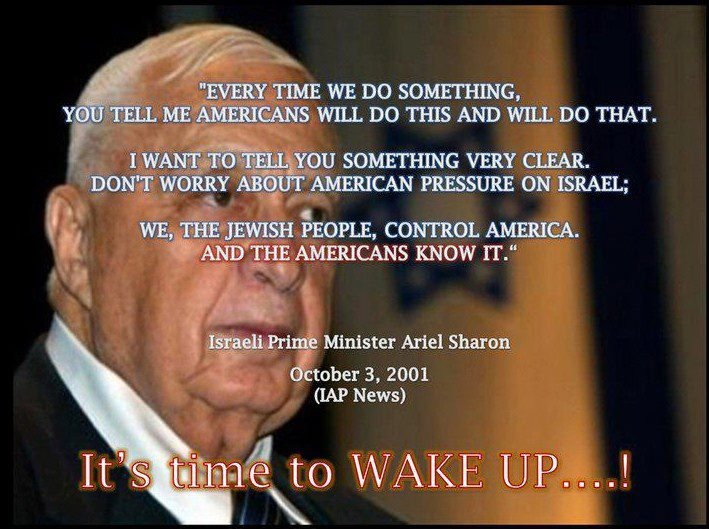 Just like Cenk mentioned, if true and Israel really does have control over America, is it anti-Israel or anti-semitic to say so ?
Or only Netanyahu, Sharon and other Israeli are allowed to say so ?

I reject the premise that certain thoughts are off limits.

Facts and actions are a different matter. From the facts I can gather, Israel is a Fascist theocracy masquerading as democracy. Zionists are real, just ask one. They will speak at length about it. They''ll look you in the eye, smile and try and convince you that merely pointing out their presence is anti-semitic. It's a joke and it's on the goyim.

The US is following a similar model except their God is money. The Zionists are really ahead of the curve. And make no mistake, they are dangerous.

Well collectively Israel does have America wrapped around its finger.

Nothing especially shocking about this.

It really needs to change.

posted on Jul, 23 2014 @ 05:02 PM
link
The fact that even the author of the Hamas affiliated IAP article - Georgie Anne Geyer - and her bosses at IAP admitted that the supposed Sharon quote about controlling America was completely and utterly fabricated stupidity doesn't bother you?

This was admitted to be an unverified 12 years ago and yet it still finds its way into conversations and portrayed as fact.

posted on Jul, 23 2014 @ 05:25 PM
link
a reply to: Djarums
You drive an interesting point.
This does not change the fact that it is rightfully believed by many, why would they need AIPAC or dual citizen lawmakers if not?

CAMERA conducted extensive Nexis and Internet searches, and found that no mainstream news organization reported as true the fabricated quotation.

Maybe because the only mainstream news organizations considered are Jewish owned

Are you against all lobbying groups? There are an awful lot of them, many far bigger and more influential than AIPAC.

The bottom line is that there are lobbying groups that exert massive and unfair amounts of influence over our government officials because they wave around sums of money that would make the average citizen dizzy. It's far from only one lobbying group that's the problem.

The author of the article herself admitted she got her info from dubious sources. The claim is that it was a PUBLIC radio broadcast. Are you telling me that somehow no one has a recording of this, and no one except an anonymous source heard this broadcast? Every time anyone tries to research this quote it comes back to the same thing. Georgie Anne Geyer's article for IAP (a Hamas affiliated outfit). Somehow no one else on the planet heard this even though it supposedly took place on a publicly broadcast radio show. You don't find that a little weird that there's no firsthand reports?

originally posted by: Djarums
The fact that even the author of the Hamas affiliated IAP article - Georgie Anne Geyer - and her bosses at IAP admitted that the supposed Sharon quote about controlling America was completely and utterly fabricated stupidity doesn't bother you?

This was admitted to be an unverified 12 years ago and yet it still finds its way into conversations and portrayed as fact.


Your pro Israeli site isn't telling the whole truth. It says the statement was given by pro Hamas American group during a speech when in fact it was said by Sharon during a BBC interview.
Burying Sharon – and “We Jews control America”

The BBC announcer reported on an Israeli cabinet meeting: Shimon Peres had been pressuring Ariel Sharon to respect American calls for a ceasefire, lest the Americans turn against Israel. According to the BBC, a furious Sharon turned toward Peres, saying: “Every time we do something you tell me Americans will do this and will do that. I want to tell you something very clear, don’t worry about American pressure on Israel. We, the Jewish people, control America, and the Americans know it.”


I am not really sure, but would this be a strawman?
My argue vocabulary is not up to speed.
Tobacco and oil are not a nation.
Why does a person with an allegiance to another country need to be making decisions here?
You can serve only one master, right?

To add, this still does not negate my earlier statement.
Many people rightly believe this to be fact.
Not many politicians get the job without kissing the ring.

How predictable. The author herself admits the shadiness of the fake comment and yet you respond by criticizing the site that reached out to her and IAP. That's just sad. Not surprising but sad.

You also didn't even read the site you linked to. Your own site does NOT say it was said BY Sharon in a BBC interview. It says a BBC presenter reported that the statement was said during a Cabinet meeting in Israel. Not on BBC.

Thank you for proving the point that the quote is fictional by contradicting yourself.

I did also find it amusing that you complained about the site I linked to this 12 year old hoax is "pro Israel" and imply that it's not to be trusted and then you go ahead and link to a bigoted birdcage liner like veteranstoday. That gave me a good Professional chuckle.

Tobacco and oil are not a nation.

Egypt is. So is Yemen, and Saudi Arabia... and many others... and that's just in that region.

They all hire lobbyists.

Just an example. Although maybe I'll be reprimanded for linking the NY Times next.

Tobacco and oil are not a nation.

Egypt is. So is Yemen, and Saudi Arabia... and many others... and that's just in that region.

They all hire lobbyists.

Just an example. Although maybe I'll be reprimanded for linking the NY Times next.

You nailed it yourself there!
Sure these products come from all over the world, but they are not ONE single country.
Aipac represents one countries interests that often conflict with ours, then to top off their lobbying power, they have ringers in congress.
Can you not understand this??
But to answer the question, no I do not like lobbyists who shower their target with gifts and gold.
The only thing that a lawmaker should consider is constitutionality and if it is the right thing to do.
A few pieces of silver has turned heads before.

First, the Netanyahu quote is from 2001 relative to the Clinton administration, if true at all. After all, no one would misrepresent quotes for political gain, would they?

Second, to suggest that the Israeli/Palestinian/Hamas conflict (decades long) is solely due to the actions of the Israeli and that the Israeli are the sole bad guys is not just disingenuous but a ridiculous exercise of closed minded thinking.

Classic example: Hamas has been lobbing missiles into Israel for years... and when they escalate the operation into thousands in a couple of weeks does anyone not expect Israel to respond? Hamas hides missiles in a school, the UN catch them at it and Hamas is unrepentant in the least. They continually use human shields and then use the deaths that result politically.

You cannot point the finger at Israel without also pointing it at the Palestinians. Hamas makes no bones about the fact that they target civilians and always have. There is no way these are the "good guys".

Personally, I think that lobbyists and their actions should be illegal. That will never happen cause the fox is guarding the chicken coop.

This propaganda didn't make it past the intro.

Pretty obvious what is propaganda, no? lol

"You can't trust every quote on the internet." -Abraham Lincoln.