Dogu-Creatures of the Watery Abyss 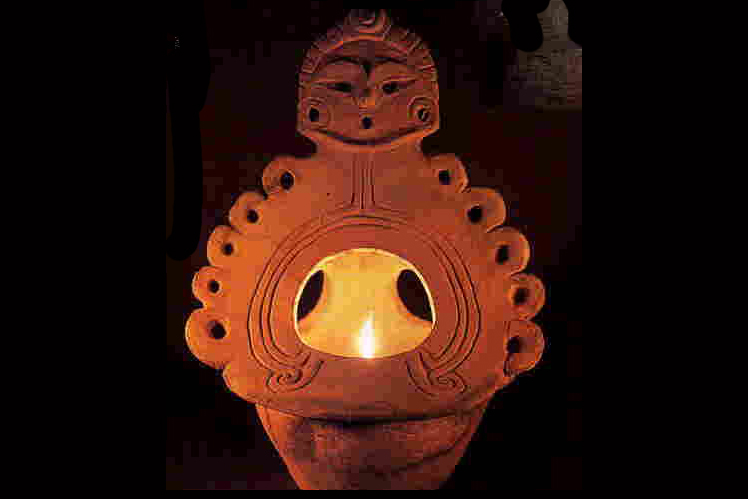 There is litte understood about the Dogu figurines of Jomon Japan, it is known that many were found broken on trash piles, which informs of their one time proliferation as household items, the general consensus is that there may have been a ritual element to breaking one's figurines and throwing them on the trash, but it seems more likely to me that this was as a consequence of religious reformism.

It is also considered they may have had some connection with childbirth the main reason being the early bronze age Chuuki period vessels seen here which suggest a figure emerging from the pot, Shussan-Doki : the pot giving birth to a child, the problem with that being that the figure emerging from portals upon the pot is clearly in itself a Dogu. 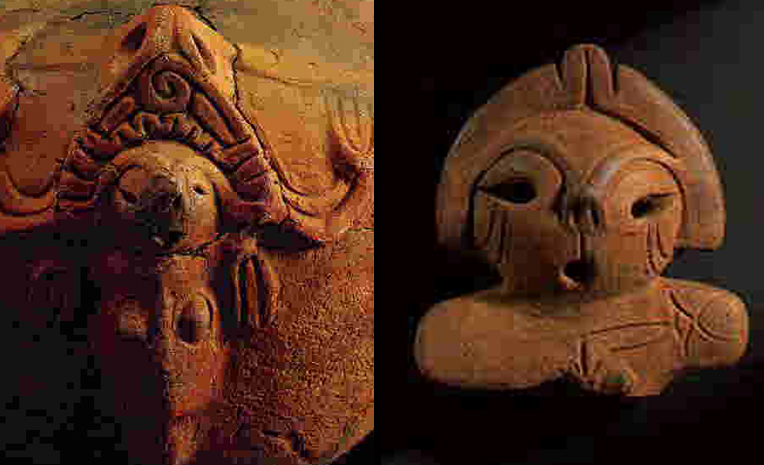 My own thoughts with regards to the figure emerging from the portal is that this is the equivalent of the Sumerian Apkallu that could emerge from the portal of the watery Abzu, a tradition which can be traced in it's development back into the early Neolithic period and also gave rise to a proliferation of clay figurines throughout the Near East and South Eastern Europe.

The clay used in the production of these figurines was in itself directly associate with this margin of the Abzu, water and Earth, and thus such figurines could be regarded as 'Binut Apsu', creatures of the Abzu 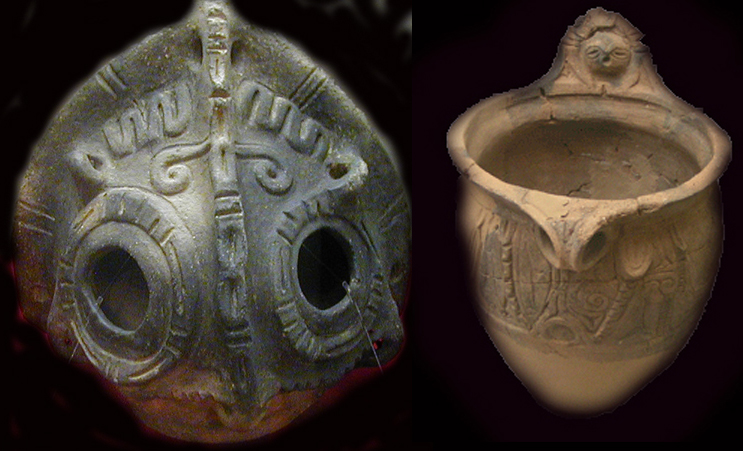 There are remarkable similarities in terms of style between the earliest Vinca figurines of SE Europe and those of the Jomon, most seen here are of the Middle to Late period from which their association with pots and portals takes on more emphasis. The portals seen on the pots are often in conjunction with swirling dynamic patterns suggesting natural association and development from such, in the same sense that water currents form whirlpools, this style is known as 'Flame ware' but shows a general concern with dynamics of flow and pattern. 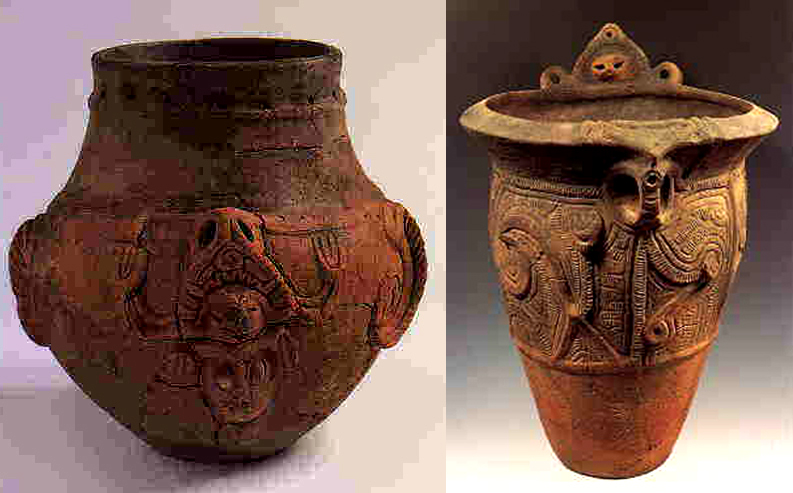 The same stylistic elements that relate to the portal can also directly translate to aspects of the figurines themselves, thus a figure can have the lower half of a female figurine yet the upper half be a series of openings, the portal also finds comparison with the decorative eye sections of the Dogu helmet, so there is an element of mixing and matching which shows how closely connected these themes and motifs were. 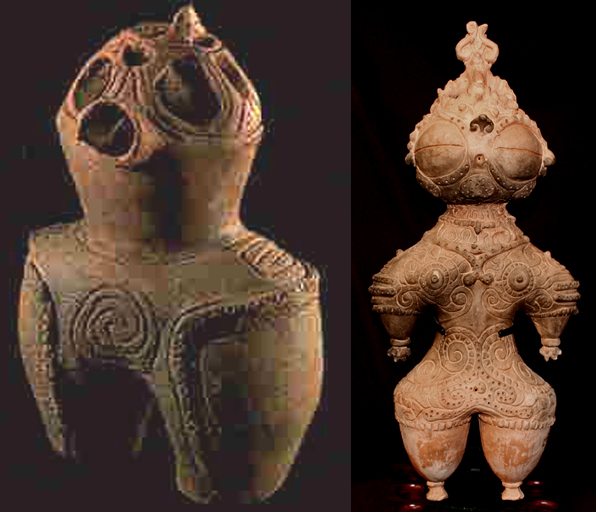 There isn't any recorded accounts of the Dogu from Japan though there does seem to be some surviving folklore with regards to the tradition of the Kappa which were reputed to inhabit rivers and ponds, in the same sense possibly that the Apkallu of Sumeria became wholly aquatic creatures during the Classical period in such tales as fishy Oannes, whereas in earlier times they had been hybrid bird-fish anthropomorphic creatures, and before that little suggestion of either. 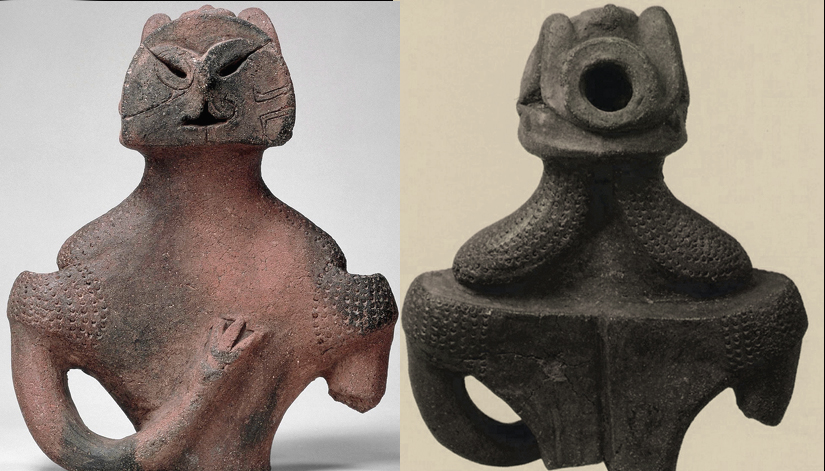 Kappa are typically depicted as roughly humanoid in form, and about the size of a child. Their scaly, reptilian skin ranges in color from green to yellow or blue. Kappa supposedly inhabit the ponds and rivers of Japan and have various features to aid them in this environment, such as webbed hands and feet. They are sometimes said to smell like fish, and they can certainly swim like them. 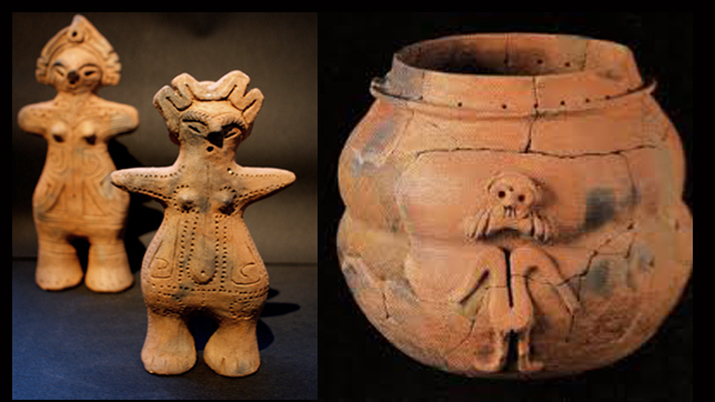 Although their appearance varies from region to region, the most consistent features are a carapace, a beak for a mouth, and a plate which is a flat hairless region on top of their head that is always wet, and which is regarded as the source of their power. This cavity must be full whenever a kappa is away from the water; if it ever dries, the kappa will lose its power, and may even die, according to some legends.

This i find particularly interesting because on the earliest figurines of Vinca and Jomon i have noted that sometimes the arms look quite artificial, more like robotic appendages, the Kappa are considered to have detachable arms!

Another notable feature in some stories, is that the kappa's arms are said to be connected to each other through the torso and able to slide from one side to the other While they are primarily water creatures, they do on occasion venture on to land. When they do, the plate can be covered with a metal cap for protection 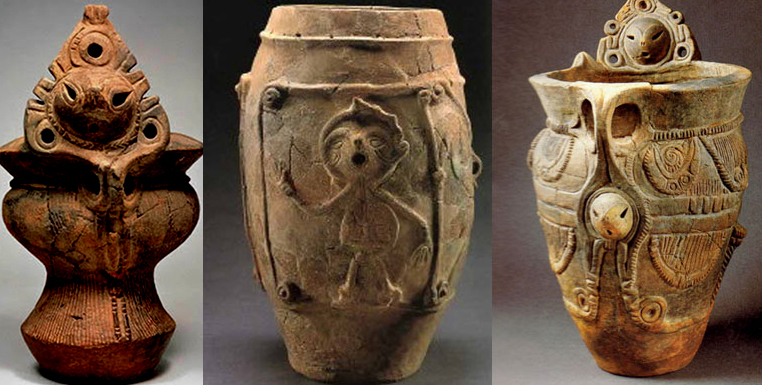 A similar weakness of the kappa in some tales are their arms, which can be easily pulled from their body. If their arm is detached, they will perform favors or share knowledge in exchange for its return. Once the kappa is in possession of its arm it can then be reattached

Kappa are not entirely antagonistic to humankind, however. They are curious of human civilization, and they can understand and speak Japanese. They may even befriend human beings in exchange for gifts and offerings, especially cucumbers, the only food kappa are known to enjoy more than human children 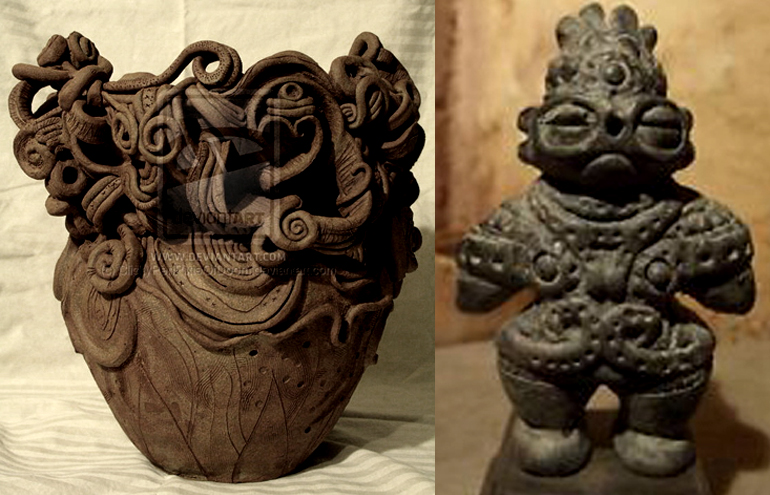 Once befriended, kappa have been known to perform any number of tasks for human beings, such as helping farmers irrigate their land. Sometimes, they will bring the occasional gift of fresh fish, which is regarded as a mark of good fortune for the family that receives it. 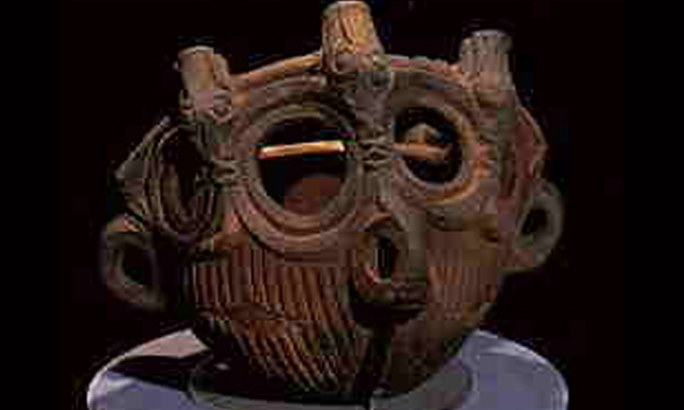 They are also highly knowledgeable of medicine, and legend states that they taught the art of bone setting to humankind.Due to these benevolent aspects, some shrines are dedicated to the worship of particularly helpful kappa. There were also festivals meant to placate the kappa in hopes of receiving a good harvest, some of which still take place today 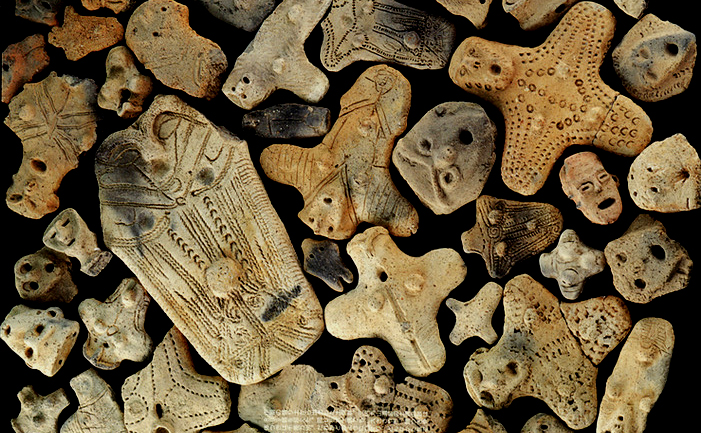 So then perhaps indication of how the creatures from the watery depths passed down into tradition and folklore in Japan long after their emergence as benevolent teachers of humanity, there is no suggestion in the Jomon artwork of the creatures as being seen as in nay way harmful or dangerous, but in modern lore they can be associated with cattle mutilations and all sorts of unpleasantness ;

originally posted by: Kantzveldt
There are remarkable similarities in terms of style between the earliest Vinca figurines of SE Europe and those of the Jomon...

originally posted by: Kantzveldtmost seen here are of the Middle to Late period from which their association with pots and portals takes on more emphasis.


Given that the Jomon were an established culture by 14,000 BC, and that Dogu were made even in the Early Jomon Period, it would be quite unbelievable that they influenced the Vinca because there's no dogu to be found between Japan and Central Europe.

Also, the Vinca figurines you refer to here date to "only" around 5,000 BC, if you actually mean "Early Vinca."


The production of these type of figurines seems to take off Late Early Period going into the Middle, a similar time frame to the Vinca, there are earlier headless figurines that are squat and rounded like earlier European 'Goddess figurines', these also get classed as Dogu but i'm not sure that's appropriate.


The stylistic similarities i noted relate only to the way in which the humanoid figurines were represented particularly the curious way they positioned and depicted arms, the red and black colour scheme, masks and costume. 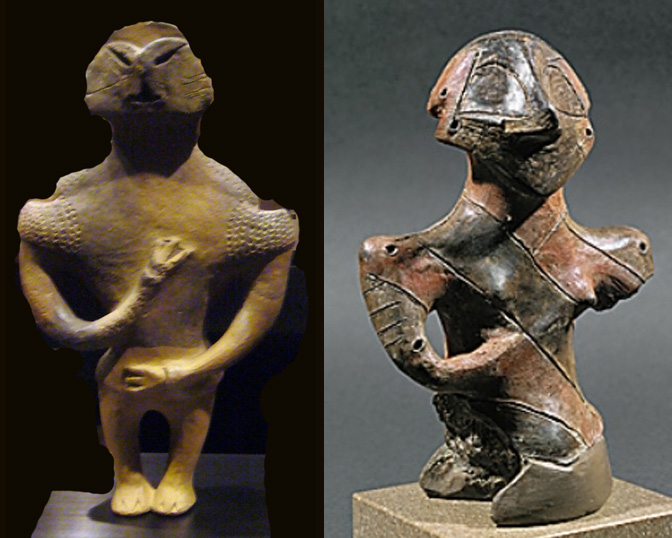 posted on Jul, 23 2014 @ 10:44 AM
link
a reply to: Kantzveldt
When I first read your post i suspected that the mythos and imagery were based on the Japanese giant salamander, and I was right.

It's considered some Kappa folklore may relate to giant Salamanders, it's the detachable arms and tradition of their being wise and knowing that intrigues me most with regards to them,they represent the Japanese version of 'Alien encounters' 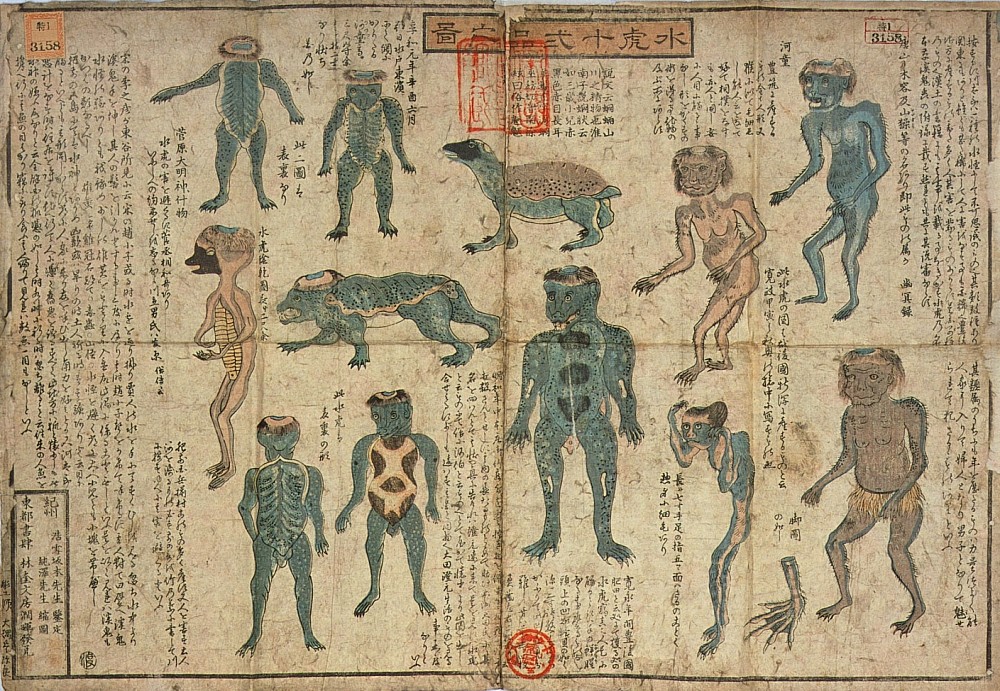 At around 11 PM on August 1, 1984 in the town of Tsushima in Nagasaki prefecture, a squid fisherman named Ryu Shirozaki was walking home from the local pier after work. As he passed near the Kuta river, he came upon a small group of children playing at the water’s edge. While it was not entirely uncommon to encounter people fishing in the river at night, it was rather surprising to see youngsters there.

As Shirozaki approached the children, he was struck by how bizarre they appeared in the moonlight. He could make out swarthy faces, unusually spindly arms and legs, and glistening skin. Suspicious, Shirozaki called out to them as he neared, but they seemed startled and quickly disappeared into the water.

In classic Shinto believe all things, rocks, plants, etc have spirits with this foundation the Japanese (with some borrowing from other cultures notably the Chinese) have a rich collection of 'beings, spirits and etc' in their folklore.

Below is a list of all the legendary and mythical creatures of Japan - they have a lot.

My favorite of these is the Shirime for I have noted a few of these in far past posting here.

I would be leery of trying to put in a connection between the Vinca and Jomon, possible but given the distance rather fanciful (IMHO)
edit on 23/7/14 by Hanslune because: Edit to add comment on Vinca

There are still reports of similar creatures, I wonder just how many creatures with enough intelligence to avoid humans are sharing the planet.

Running at a high rate of speed, the Lizard Man was coming straight for the startled motorist. Davis ran to the driver's door, managed to get in the car, and locked the door just as the creature reached him. It tore and clawed at the mirror, the door handle and the window. It then jumped onto the roof of the car and began to claw and scratch at the roof and the front windshield. Davis, overcoming some of the initial shock at seeing a giant human-like lizard, started the car and drove off. He swerved to shake loose the creature.

Maybe also can tie into the seeming war between water and land species in the rock art. 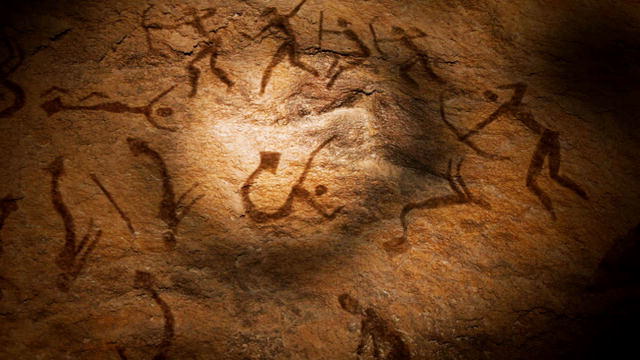 Yes you do have to take Animism into account and i'm sure there was considered a very direct relationship between the figures and clay and water, probably also fire, but how that could manifest itself could of course be quite complex as in Sumeria humans were also considered as created from the clay of the Abzu.

It is possible they then took on the role of creators themselves and created their own little helpers along the same lines and these became spiritually animated and by some circuitous principle taught them everything they already knew...


Yes it seems there are still reported encounters, i wonder how much this is to do with one's cultural baggage as to how one interprets difficult to understand events and phenomena, what stories and illustrations does the mind latch on to in order to provide some sort of seemingly satisfactory explanation, and how do those start off in the first place.
edit on Kpm731203vAmerica/ChicagoWednesday2331 by Kantzveldt because: (no reason given)