posted on Jul, 22 2014 @ 03:58 PM
link
The English journalist Graham Philips have been reported to have been lost near Donetsk.

Here's him confirming he's there:

Here's the report of a famous ukrainian reporter Anatoliy Shariy. 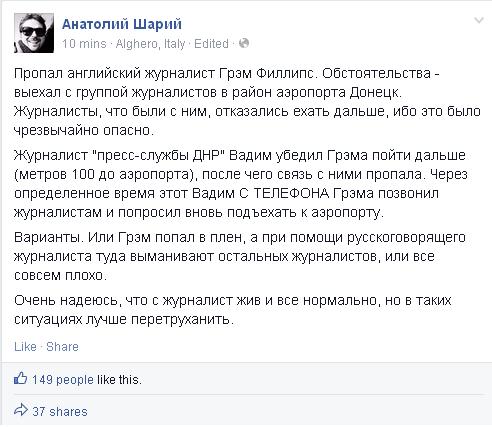 "The English reporter Graham Phillips have been lost. Circumstances:
Went with group of journalists to the region of Donetsk Airport.
The journalists, that have been with him, refused to go further, cause that seemed extremely dangerous.

The journalist of DPR Press, Vadim, persuaded Graham to go further (100m from airport), after that the connection with them got lost.
After some time, this Vadim called from Graham's telephone to the journalists and asked to come to the airport again...

Versions: Either Graham is taken prisoner, and with russian-speaking journalist they (not sure who) try to get others, or everything is much worse...

I hope a lot, that he is alive and well, but it such circumstances it's better to stay alert."

Need to mention i don't say anything about who did this. No evidence of either side. But seem to be Ukrainian forces, cause he seemed to be pro-russian and with a DPR reporter... He's also affiliated with Russia Today.

originally posted by: whitepanther999
Everything escalates.


Journalists are supposed to be treated as civilian noncombatants in a military zone. Violating that can have negative responses.


originally posted by: whitepanther999
Need to mention i don't say anything about who did this. No evidence of either side. But seem to be Ukrainian forces, cause he seemed to be pro-russian and with a DPR reporter... He's also affiliated with Russia Today.

Pretty odd considering he was detained by the ukraine national guard just two months ago :/

That is true that he was also detained and released by National Guard two months ago.

I just want to know one thing. People say Russia Today, and russian reporters in general are not to be trusted. But they are the ones who often go to places of war with the knowledge that they have good chances to die.

Are there many western reporters in the fighting territory in Ukraine? I don't know that, just wondering, due to abundance of breaking news from western media.


They believe he's been taken hostage.

Yet pro Russians in these forums and elsewhere keep stating Donetsk and the surrounding area is completely under the control of the rebels.

Secondly it appears he was set up by a reporter from the DPRK...err DPR.

I dont see how anyone other than the rebels / Russia could be behind it.

posted on Jul, 23 2014 @ 05:51 PM
link
a reply to: Xcathdrapretty sure many of the hamas and dpr apologists here are part of social media psyops from those groups and not uninvolved observers. however there are also quite a few warped people that also feel that way to the extent they are indistinguishable from them.

By the same Ukrainian reporter Anatoliy Shariy's words, 5 min ago:

Graham Phillips is alive, he is DETAINED! The companion was beaten up, and they took all the Brit's equipment.
Were smart enough not to touch or hit him.

Let me remind you, he was with DPR reporter. These are Ukrainian who got them.

Journalists are supposed to be treated as civilian noncombatants in a military zone. Violating that can have negative responses.

Are you trying to suggest that RT Stringer Phillips was an active participant in the conflict? That he was in some way assisting or helping Federal State of Novorossiya forces?

What are you smoking? He is a news reporter - yes he is contracted to supply to RT - and a very good and brave decent man. You should be ashamed for demeaning such an innocent.

posted on Jul, 24 2014 @ 07:38 AM
link
Yup, Ministry of Foreign Affairs of Russia stated in their commentary that they are prisoners, according to the data they have.

I don't read it how you are, to me it just says that if the people who have captured him have violated the rules about treating him as a civil noncombatant then there will be negative responses. Nothing bad about the reporter.

Here's the transcript I've made of Vadim's report on the situation:

Don't mind a bit weird sounding of Vadim, he has contusion.


How did the capture happen? What happened near the airport?

V: I saw him running to the airport. I followed him, and the combat situation happened. They forced us to the ground.

So, have you beenb trying to get Graham back from hostile territory? And both got captured at this moment?

V: Yes. And then they took us to another place. There they were beating us quite 'good'. They took him somewhere further, either Kiev or Zaporozshye, I can not say for sure. Because, in the car, when we were sitting with the masks on, they openly said "You wanted to know Ukraine? You will know it." and said that they will go to these places.
They took me out on some strange security checkpoint, and said to road police officers to take me to Donetsk.

So, they didn't know that you are ex-rebel from Vostok batallion? They just assumed that you are some young amateur reporter?

And they seemed to have an order for Graham, cause he's a well-known reporter, and they took him to Kiev...

V: Yes, and to me they said that I'm lucky that I am not famous, but this guy (Graham) is known, so we will throw you out and will continue with him.

So, they threw you out somewhere near Krasnoarmeisk, and from there you went to Donetsk?

V: He also told me not to tell anybody that there was beating and torture, else i will suffer.

So they beat up both of you at the inital place?

V: They did the beating.

And they beat Graham, too? and he confirmed this to you?

V: Yes, yes, look, initially we were in one cell, but later they separated us. Graham screamed in his own language, me - in mine, because it's painful.

I see... Thank you, Vadim, restore your strength, let's hope that you will not get captured again in the future by ukrainian fascists. Wish you good results in your newly acquired reporting activity. Wishing you to get better, it is very important.

Attention to counter-intelligence units. Judging by the rebels info, on our land was captured Graham Phillips, the journalist of the channel Russia Today. I want to note, that Graham Phillips was at least twice captured by our fighters for intel activity. Under the disguise of reports from fighting grounds he identified our army positions in April in Kramatorsk, and in May in Mariupol. He is undoubtedly a russian intelligence agent. In Kramatorsk after his visit into airport area, where our "Alpha" captured him, there was an anti-tank missile strike on our positions. Phillips calls false disguise - he uses the names of other respectable western companies. And we should treat him as uncovered enemy agent.

A taste of free Ukrainian media for you.