A why to get a mobile camera to the moon.

posted on Jul, 21 2014 @ 06:45 PM
link
I was watching a TV show and they where showing blurry picture of the moon. That got me thinking how we could get a camera to the surface of the moon so the average person could explore the moon.

My idea is get a solar powered remote control vehicle.

Got the pic of the truck at solar truck.

Than add a remote camera to the vehicle.

Than build a landing craft that once it has landed becomes a radio relay where the vehicle sends it info to the craft and the craft would send the signal to earth.

Not I sure how to get the craft to the moon and not sure what steps I am missing.

This is the type of idea that makes the human race achieve what a hundred years ago wasn't even being thought of, let alone thought possible. I hope it or something like it happens in the near future.

My answer is NONE.

They've had the tech to give really great photos since camera's were invented. But choose not to.
edit on 21-7-2014 by Unity_99 because: (no reason given)

They had the technology to do this years ago! The big question is why haven't they?

posted on Jul, 21 2014 @ 07:12 PM
link
I've had this same scenario for a while now. What I was thinking is to get the rover to the edge by way of the balloons everyone has been using. Once its there, just before the balloon pops, release the rover and ignite a rocket to push it past the gravity boundary. Of course this would take a lot of financing and experimentation. You'de have to find the right balloon material and pressure to get the highest altitude. Perhaps multiple balloons with low pressure. The math would be fun to figure out with a small rocket to get the rover at the point where the moon will be at the same time. Then land the rover in one piece. You have to factor in mico-debrit, radiation and of course the occasional UFO. I figured a command center set up in the dessert with a satellite dish hard feed straight to the rover with live footage.

I agree, it a lot of just bring things that we already have together and i think it would be over all cheaper i thank the most expensive part of the project would be the rocket and fuel.

Imagine a set up where they could charge people to get a chance to control vehicle bit. Maybe even have a few small R/C rovers running at the same time, with a couple more on standby as backups.

I would consider paying $100 or so for 10 mins on the moon, some might even pay more.

If you can find a way to make it profitable, the private sector will find ways of making things happen that NASA could only dream of.

Have a look underneath before you buy one, and if it says "Made in China", forget it.

Good idea. Just not sure if the world govs would allow it. At least they would set up "restricted zones".

I figured something like this would have to be kept on the down low. Otherwise you send it up and it gets shot down.

Good idea and your heart is in the right place. However there are a few things you need to consider:

Transmitting and receiving: Your rover will need to be able to transmit information, like your pictures, back, and it will also need to receive information on where to go. Keep in mind that it will be at least 250,000 miles away.

Environment: most commercial or hobbiest grade electronics and electrical equipment will not do very well on the moon, you'll need to find things that can work in a vacuum, widthstand harsh UV and other electromagnetic radiation.

posted on Jul, 21 2014 @ 08:10 PM
link
Problem here is you can't just throw anything up on the moon. The temperature swings on this thing would be massive and of course there's cosmic rays to contend with.

Plus what the poster above mentioned. Not really hospitable for a DIY rover

There is a company that will put microsatellites in a low Earth orbit for like $10,000 if I remember correctly. They'll come back down within a year or two but you're basically given a footprint and some guidelines for materials and EM but beyond that you put in whatever instrumentation you want. I was trying to talk a group of my nerdier friends into throwing in to put up one so we could brag about having our own satellite lol.
edit on 2014-7-21 by theantediluvian because: (no reason given)

posted on Jul, 21 2014 @ 08:39 PM
link
Governments around the world would crap all over themselves if someone sent their own rover to the moon. I do think it would be cool to have our own rover up their. Sadly, launching something in to space probably has very strict laws. Especially if you slapped a satellite or some kind of equipment with it.

There is a company that will put microsatellites in a low Earth orbit for like $10,000 if I remember correctly. They'll come back down within a year or two but you're basically given a footprint and some guidelines for materials and EM but beyond that you put in whatever instrumentation you want. I was trying to talk a group of my nerdier friends into throwing in to put up one so we could brag about having our own satellite lol

Mini-Satellite Project May Be Doomed

Failure of a Satellite Fleet

Haven't you just reinvented the remote controlled rover, which we've had since the 1970s (Lunokhod)?

We've got two of them still operating on Mars, and there's one on the moon which is still functioning but unfortunately no longer mobile. But there's another one being launched next year.

As for those "blurry photos" you talked about... well, we can take a photo of that rover (which is only five feet across) from lunar orbit using another satellite. The yellow arrow points to the rover, and you can see the tracks too. 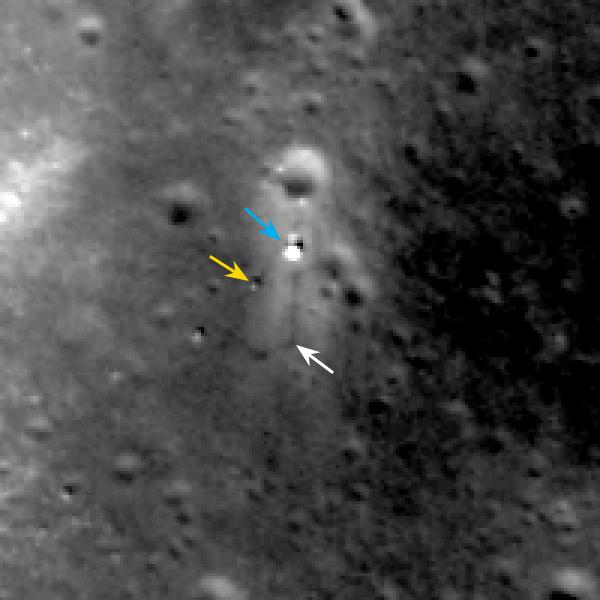 If you were standing there, we'd probably be able to see you (or at least your shadow)!

I am seriously glad you mentioned all that.

Because I had already filled an old sewer pipe with m80's, tied my GoPro to a Toys R Us remote control 4x4, stuffed my circa 1978 Hansolo and Chewie action figures into the front seat and was about to light the match.

That was too close

originally posted by: criticalhit
a reply to: eriktheawful

I am seriously glad you mentioned all that.

Because I had already filled an old sewer pipe with m80's, tied my GoPro to a Toys R Us remote control 4x4, stuffed my circa 1978 Hansolo and Chewie action figures into the front seat and was about to light the match.

That was too close

posted on Jul, 22 2014 @ 11:06 AM
link
I wish all the conspiracy and non-mainstream believers would pool donations and have a rover on the Moon and Mars, doing exactly whant they want (i.e. take pictures and videos, examine so-called anomalies, etc.)

As it stands, sending robotic rovers to moons or planets is very expensive, and is currently only funded for the purpose of doing science.

The Lunar Reconnaissance Orbiter gives us high-resolution images of the Moon already. Personally, I don't see how you could get more than that using a single rover on the surface. It would probably break anyway, like the Chinese Yutu rover.

Biggest obstacle as has already been mentioned is getting data to and from your rover to navigate. Maybe a first step would be to put in place some intermediary satellites between earth and the moon to relay the data.