A Spotless Sun Baffles the Scientists

This was taken by a friend on 5/7/2014, seems quite active, so it must have calmed down a lot over the last two weeks. 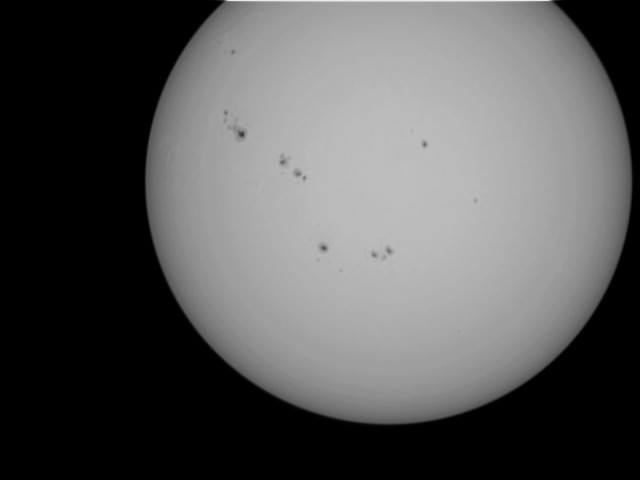 There is a tiny spec of a black spot, 2 or 3 dots close together, unless it is something in between? And there are "white spots" on the left side ( our right )... lol What are those "white spots"?...

posted on Jul, 21 2014 @ 04:02 PM
link
Does this mean there's gonna be a heat wave here on Earth?
Humans don't know a lot about the Sun and what it's cycles are, IMO. This could be something completely unseen before on a scale that could change everything!!!(me trying to be dramatic)

displays the averages of sunspot number from minimum to minimum (usual solar cycle) marked by squares and from maxi- mum in a cycle to maximum in the next cycle marked by filled circles.
…

The top panel of Figure 2 displays global temperature variations since 1850 through the deviations from aver- age level 1961-1990.

originally posted by: GaryN
I read about how, for the first time, last year they altered the axis of the ISS to get a better look at UV levels from the Sun, something was going on I guess. Lately we have had UV ratings of 9 here in the Pacific NW, pretty high for us, though I have read of 15's in Texas and Australia, and up a mountain in Bolivia, they had a reading of 43 or so. That is supposedly the value they will be dealing with on Mars, with its thinner atmosphere letting in more solar UV. So what I wondered is the UV rating in space, or on the Moon with no atmosphere to block any UV? I don't see a simple answer anywhere, I'm sure there must be an ATS member with an answer.


The numbered UV index is for UV B, which causes sunburn. It is a linear scale. Earth's atmosphere screens out about 95% of UV B received from space. Maximum levels at sea level, at the equator are about 20. Levels in space, at Earth's (and Moon's) distance from the Sun should be around 400. Mars is about half again as far from the Sun. Assuming its very thin atmosphere has a negligible screening effect, the maximum level should be about 200.
edit on 21-7-2014 by Ross 54 because: improved word choice

I'm wondering IF the Earth has ever been wiped out by the sun like in the scene and IF the quiet sunspot thing is a calm before the storm.

Or maybe solar spots are black holes/sungates and there was some kind of security issue and they were forced to close down the sun for the day (except for a few spots open for traffic control ) ?

A thought experiment by Antonia

originally posted by: engvbany
In the long term, no correlation between sunspot numbers and climate ... 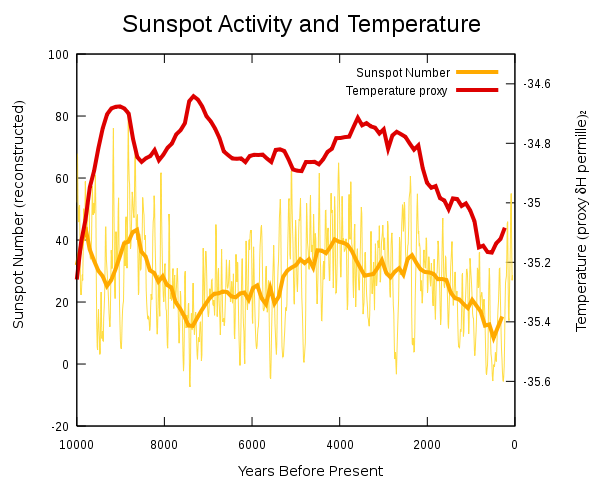 They did that just to make sure that you would be able to post a pretty graph based on what the temps and sunspot counts were at the time that they carved them into rock, so that we could someday verify that there's no link between the sun and the temperature here on Earth.

Correlation does not equal causation.


originally posted by: engvbany
In the long term, no correlation between sunspot numbers and climate ...

Nature did. We've learned how to read what she preserved in things like ice cores at the poles and tree rings.

Amazing that someone on a site whose motto is Deny Ignorance in a science forum wouldn't know that.
edit on 21-7-2014 by JadeStar because: (no reason given)

posted on Jul, 21 2014 @ 05:30 PM
link
a reply to: JadeStar All that is just way too much speculation based on numbers. I can see the value in some of the ways they pull records from times we can't phathom but to know about sunspots day to day is a little over the top.


originally posted by: engvbany
In the long term, no correlation between sunspot numbers and climate ...

Nature did. We've learned how to read what she preserved in things like ice cores at the poles and tree rings.

Amazing that someone on a site whose motto is Deny Ignorance in a science forum wouldn't know that.


Nature did? Sunspots are recorded in nature? Please provide your proof.

Human interpretation of nature is something entirely different.

You would have to be a fool to believe that we interpret everything in nature correctly, especially the first time around.

What's more amazing is that empirical science and direct measurement is trumped by inferred and interpreted proxies, and that someone such as yourself would oxymoronically post what you did in a science forum.

at Earth's (and Moon's) distance from the Sun should be around 400.

Thanks Ross. 400 for UV B. And what about the real nasty stuff that doesn't get through our atmosphere at all?
Surely there will have to be some serious safety concerns with visiting Mars, and definitely the Moon, developing cataracts a long way from home, or suffering arc-eye, would be very bad. Eagle Eyes Optics developed their glasses from NASA science it seems, just E-Mailed them to ask about UV C protection.

originally posted by: Arbitrageur
a reply to: stirling
No matter what the anomaly is, they usually claim it proves their "model", even if it doesn't.

This solar cycle is proving to be one of the more unusual cycles in recent times.

The sun went about 70 years without many sunspots from 1645-1715 during the Maunder minimum, so it's always possible we could have another such period though it's too soon to say if that's happening again:

originally posted by: engvbany
In the long term, no correlation between sunspot numbers and climate ...

The maunder minimum seemed to have some correlation to lower temperatures in Europe as did the other minimums of sunspot activity, but whether this was representative of global temperature isn't certain. The time scale of your graph is a lot longer and I don't even see the maunder minimum on it.

Like the Dalton Minimum and Spörer Minimum, the Maunder Minimum coincided with a period of lower-than-average European temperatures...

The Maunder Minimum coincided with the middle part of the Little Ice Age, during which Europe and North America were subjected to very cold winters.


Can you explain how they knew back in the time referenced, there were no sun spots? How could they even know that?

Even though sunspots are cooler the brighter areas around sunspots called faculae are hotter which increase the total output of the sun....

The bright regions on the Sun that surround sunspots are called faculae. Although sunspots reduce the amount of energy radiated from the Sun, the faculae associated with them increase the radiated energy even more, so that overall, the total amount of energy emitted by the Sun increases during periods of high sunspot activity.


I guess The Stargate

IS Closed for the time Being LOL!

So all those times the sun was so active people thought it was the end of the world, while wars raged across the planet...Anu was just drunk or something, right? Too many ethanol comets or something?