A little bit about sweating and hyperhidrosis

posted on Jul, 20 2014 @ 02:17 AM
link
I have a sweat problem that has to be treated medically. Traditionally, I thought that the sweat glands were just located in certain areas, like the arm pits and groin - but then I remembered feeling like I was sweating on my back. Stupid, I know. But it (of course) turns out we can sweat anywhere on our body.

The following body maps show the intensity of sweating across the front and back of a person while excising at different intensities. 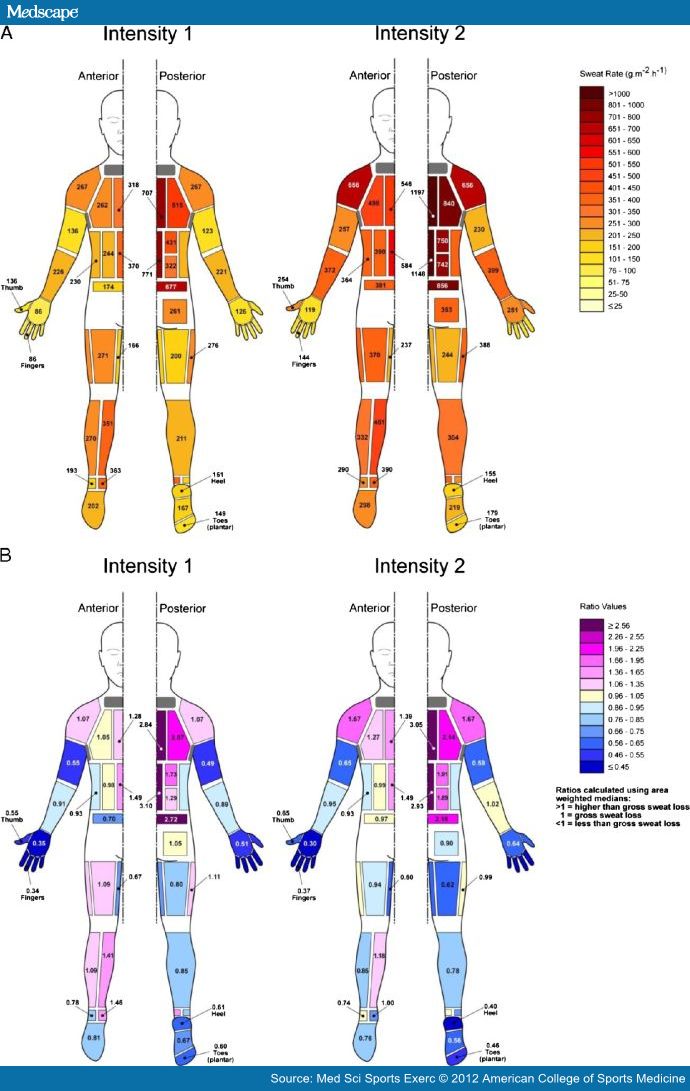 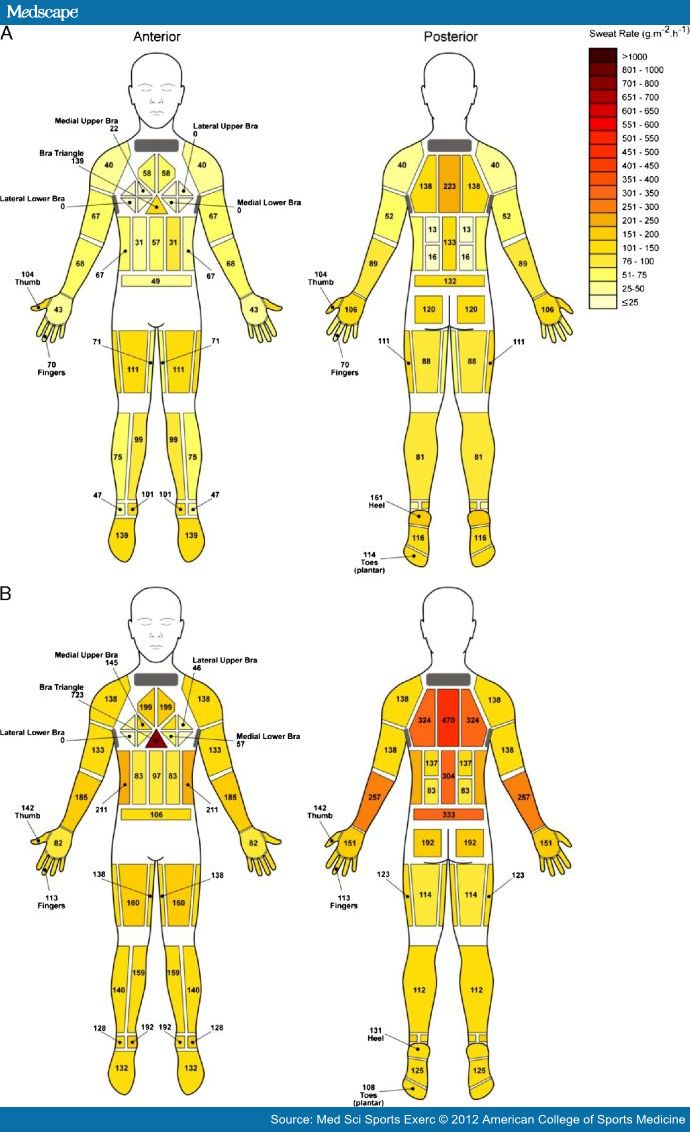 It turns out that there are 250,000 sweat glands in each pair of feet alone. People with Hyperhidrosis sweat so much that it interferes with their lives - through smell, or being too wet, or whatnot.

However, it turns out that even though there are eccrine sweat glands on most of the body, it is the apocrine sweat glands in the armpits and genital region that produce an odor when they interact with bacteria on the skin.

In the following diagrams from Google Images, notice the differences in the two sweat glands. Most notably, the apocrine sweat glands interact with hair follicles. Could this be because they appear in areas where there are more intense mats of hair?

In hyperhidrosis it is the eccrine glands that produce too much sweat - three to four times to normal amount - and this produces so much that it causes a problem due to wetness. According to the article below, it can also cause smell problems as well. To know if you have a problem consider the following symptoms: having to shower twice a day, having to change your shirt because it gets drenched in sweat during normal activity during the day, or having to replace your shoes due to wear and tear from sweating too much.

In order to combat this, I am trying a new regimine of showering twice a day, changing my clothes an extra time each day, and using a deodorant that I apply at night before bed. This is called Certain Dri and uses aluminum chloride as its active ingredient.

A second method that is more effective is to use a battery powered electrical current on the locations of the sweat glands every three days for twenty minutes. This is called iontophoresis.

That video is quick to skip through, and kind of hilarious. I wonder if you could modify the device to work on the armpits and genitals, lol. That reminds me of when the H.D.R. device appeared in Napoleon Dynamite.

Thanks for putting this out there. I have a major sweat problem. Mostly in my armpit area and stomach. I always have to watch how the weather will be and choose my clothing very careful. I can be sitting in the car with the air condition on and have drips of sweat running down my stomach. TMI, sorry. I've brought this up to my doctor but he doesn't see it as a problem, but for me it's a huge problem, I've been dealing with it for about 15 years. I've heard that botox works great in the underarm area. What have you tried that has worked and hasn't?

posted on Jul, 20 2014 @ 05:29 AM
link
Interesting. I personally have a rpoblem with not sweating enough- my body doesn't rid itself of toxins well enough, and I end up with acne easily as a result. I have to make an extra effort each day to break a sweat- have to go to the gym or do an active sport.

I did notice that I sweat in different places than most men, though- if I can get it going, it happens mostly on the chest and stomach, not the armpits or feet too much. Nice to see that is normal!

posted on Jul, 20 2014 @ 07:09 AM
link
I have a hyperthyroid. With very little exertion, be it summer, or winter, I sweat so much, head to toe, that I look like someone dumped a bucket of water on my head. Lol

I bathe/shower using dissolved borax and use my homemade coconut oil and baking soda creme on my pits to effectively eliminate any body odor.

I'm surprised the diagrams in the OP don't show the sweat rates for the head/scalp. It's so embarrassing to have sweat streaming down from my head like a river when I'm at work with the ac set on 65, when all I did was sweep the floor in my small office. Lol
edit on 7/20/1414 by NoAngel2u because: (no reason given)


She was a little musky, but in a good way.

posted on Jul, 20 2014 @ 07:22 AM
link
Forgot to mention, that I make a baking soda and cornstarch powder that I dust liberally in my shoes, bra and panties. I'm not one to normally share such personal information, but hopefully anyone with this condition, and struggling with controlling the resulting odor, can appreciate it.

originally posted by: NoAngel2u
Forgot to mention, that I make a baking soda and cornstarch powder that I dust liberally in my shoes, bra and panties. I'm not one to normally share such personal information, but hopefully anyone with this condition, and struggling with controlling the resulting odor, can appreciate it.


Try dusting your shoes with boric acid. It seems to work.

posted on Jul, 20 2014 @ 08:11 AM
link
I don't know if this is what I have going on or not, but it seems plausible. The places for me that are constantly sweaty are my hands (have to wipe my hands off constantly) Behind the knees, inner elbow, armpits, between & under the tatas, my entire hairline & my feet. I can't wear enclosed shoes, I just can't do it. There has to be direct air flow to help evaporate the sweat or I get mammoth blisters from the moisture lubrication, even socks don't help prevent a slip 'n' slide effect in shoes.

I've tried so much OTC stuff that I'm at a loss anymore. I might actually have to bring this up with my doctor & try something more medically oriented...

posted on Jul, 20 2014 @ 08:28 AM
link
I don't think I suffer from this but it seems to me like every year I sweat more and more. This year, by the time I'm done with work it looks like I took a swim in my blue-collar shirt, and I'm constantly wiping the sweat from my forehead so it won't end up in any paint job or whatever I may be working on at the time.

Of course, it's summer here and I don't have A/C at work so I'm out in 85-95 sometimes up in the 100's Fahrenheit for 8-10 hours a day, so of course I'm going to be sweating a lot. I don't seem to sweat so much from my hands. Mostly my armpits, groin, head, feet, and back. But I definitely sweat more than my boss, except for his arms and hands sweat a lot. I know because I'll be working on something and he'll come by and put his hand on it or lean on it and leave a big greasy hand/arm print that I have to clean up so it won't mess up the paint. Thanks, boss.
edit on 20-7-2014 by Aldakoopa because: (no reason given)

bad smells come from what you eat. But if you are still looking for alternative treatments, here is a good start: www.earthclinic.com...

But usually, depending on how long you have had it,
you will have lots of other symptoms too!
Weakness so bad, you feel like you've been sick in bed for a week.
So weak that trying to do any little thing wipes you out,
& you break out in a full, dripping, body sweat!

So don't let a doctor brush you off,
until you have checked out all the possibilities!
WOQ

posted on Jul, 20 2014 @ 04:10 PM
link
Has anyone tried baby powder, if so how did it work for you ? Also, for those who sweat more than normal, what is your weight like? Are you overweight, underweight, normal, what's your BMI, and do you exercise? For me I don't exercise (besides chasing the kids around all day), I am considered underweight and under my BMI. I am skinny but not bony skinny. I'm curious to know if the sweat helps control our weight, besides genetics playing it's part.

I have found that the aluminum chloride deodorant at night helps - I still sweat a lot, but not under the arms, at least it doesn't smell. I break out in sweat over the smallest activity or smallest amount of heat.

a reply to: _damon

Yes I think that my diet contributes to the smell of the sweat, thanks for keeping me reminded of that.

Also, I don't eat enough during the day - so the sweat might be me going into ketosis, or breaking down stored fats instead of whatever the body usually breaks down (transient fats?).

Ketosis /kɨˈtoʊsɨs/ is a metabolic state where most of the body's energy supply comes from ketone bodies in the blood, in contrast to a state of glycolysis where blood glucose provides most of the energy.